As time goes by, the consumer is gradually becoming progressively more intelligent, and more difficult to reach through traditional marketing strategies. Gone are the days of the famous 4Ps, marketing strategies and solutions went intergalactic a fair few years ago. This interactive visualisation of some of the different Marketing Technology solutions out there just goes to prove it. 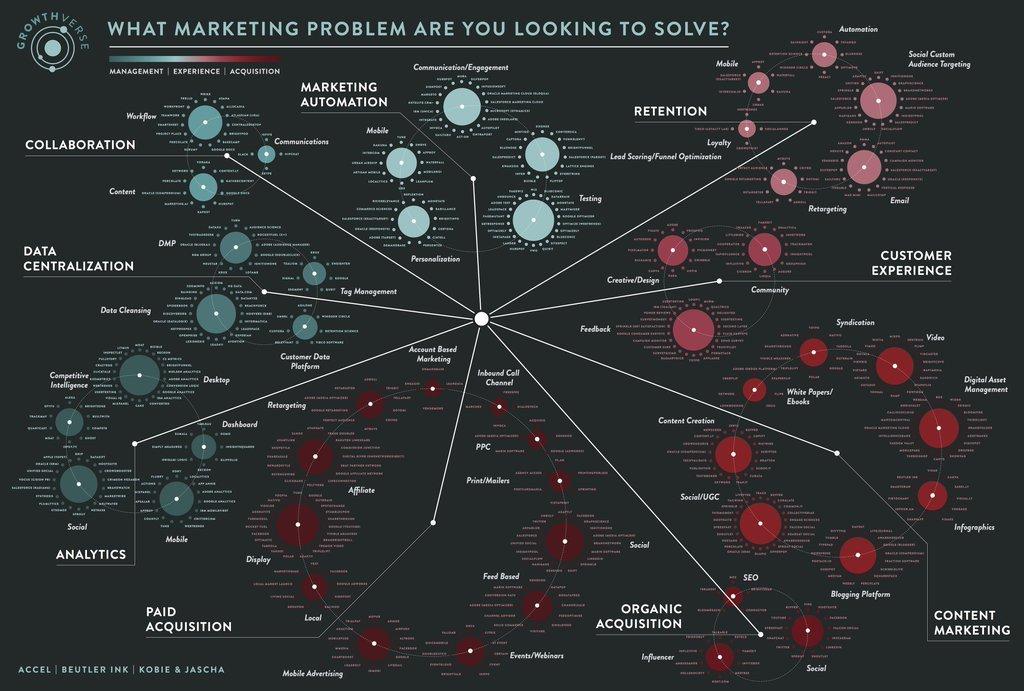 Guerrilla marketing has existed for hundreds of years since it simply refers to the adoption of non-traditional marketing tactics, which of course can change depending on the social context (posters at some point in time weren’t habitually used as a marketing strategy, in the same way, that mobile phones haven’t always existed).

The term for the concept was coined in 1984 by Jay Conrad Levinson when he wrote the book ‘Guerrilla Marketing,’ and yes, it does have some kind of association with warfare, as you will see from the examples in this article.

Since marketers are always looking for more ways to get to their potential target markets, guerrilla marketing itself has become an umbrella term for even more specific communication strategies designed to engage and surprise the consumer with their products and services. There are lots of different types, including ambient, ambush, stealth, viral, street marketing and even one technique called astroturfing.

The cool thing about this kind of advertising is its witty nature. These types of campaigns are usually extremely well thought out and can be quite comical, especially when campaigns that take advantage of context to convey their message.

In this article, we focus specifically on Ambush marketing. Here’s the Cambridge Dictionary definition, to put you in the picture.

“A situation in which a company  tries to advertise its products in connection with a big  public  event, without paying any money, although they are not the official  sponsor.”

With the Olympic Games coming up in Rio de Janiero later this year, brands will already be coming up with their latest ambushes. We got a bit of an idea of what could be in store at this year’s Superbowl, with the efforts from Newcastle Brown Ale maintaining tradition.

Since ambush marketing can be quite risky business, and done on a large scale, there aren’t hundreds and thousands of examples. We’ve compiled a list of some of the greatest ones from the last decade, including some of the most recent attacks.

This is one of our favourites in the hall of sneakiness, for its sheer audacity and overall effectiveness. Also, because unlike the vast majority of ambushes, this one wasn’t carried out by the usual suspects and it found a loop-hole in ambush legislation that could be quite tricky to close. Dr Dre sent members of Team GB a set of his new product: headphones bearing the Union flag in a crafty marketing ploy and it worked like a dream. A couple of athletes happily tweeted about their joy of receiving their themed gifts, making for an extremely low-cost guerrilla campaign, and putting the IOC’s nose right out of joint.

In June 2014, Volkswagen USA provided us with a blatant example of ambush marketing during the World Cup. How convenient that the word ‘Golf’ is phonetically identical to the word ‘goal’ until the final letter is pronounced. The new VW GTI suddenly takes on character as one of the star players, changing colour to suit the goal scorers throughout the campaign, despite Hyundai being the official sponsor. How rude. You can see the spots here.

#Gooolf! #FRA Wow, we felt that from all the way over here. #VWGolfGTIhttps://t.co/VyxgePDWHg

3# Ambush Marketing at Wimbledon by Pringles

Pringles distributed around 24,000 of these cans outside Wimbledon and the imaginative ambush marketing stunt certainly caught a lot of attention.

Ambush marketing gets particularly exciting when it develops into a dialogue between brands. This recent example from France is high on the list of faves for Burger King’s ballsy comeback. Well, they did leave themselves wide open to be fair… It just goes to show that the billboard is not dead, in fact, it’s a minefield of vulnerability in terms of guerrilla marketing – art directors be aware! Thank you to Cristian Monroy for his excellent article on this campaign.

Bavaria beer ambushed the South Africa 2010 World Cup and it’s official sponsors Budweiser when they bought tickets for a section of the seats in the stadium for girls dressed in bright orange clothing (associated with the brand) who were then told to sing and draw attention to themselves during a live game. Although the evidence against them was circumstantial due to the fact that Holland also plays in orange, the girls were still forced from the stadium and threatened with jail time because of the stunt.

Check this out: We turn famous brands into beer bottles. 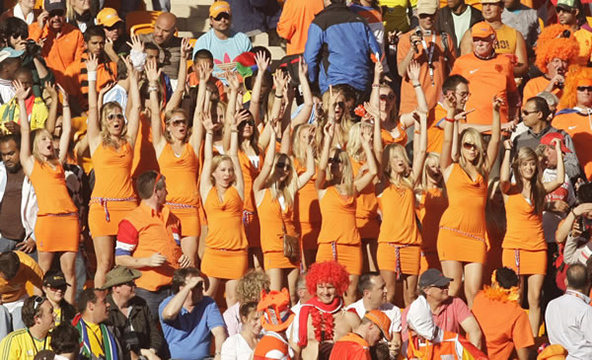 6# Oreo, you can still dunk in the dark

Not all ambushing is a highly premeditated affair. Oreo ingeniously launched a reactive Twitter-based campaign following an unexpected blackout during the 2013 games, yet another demonstration of the power of social media channels. ‘You can still dunk in the dark’ is an excellent example of how it’s never too late to gatecrash the party. We imagine a lot of creative directors for big brands were kicking themselves at the time for not having come up with this one first. Very sneaky, Oreo. 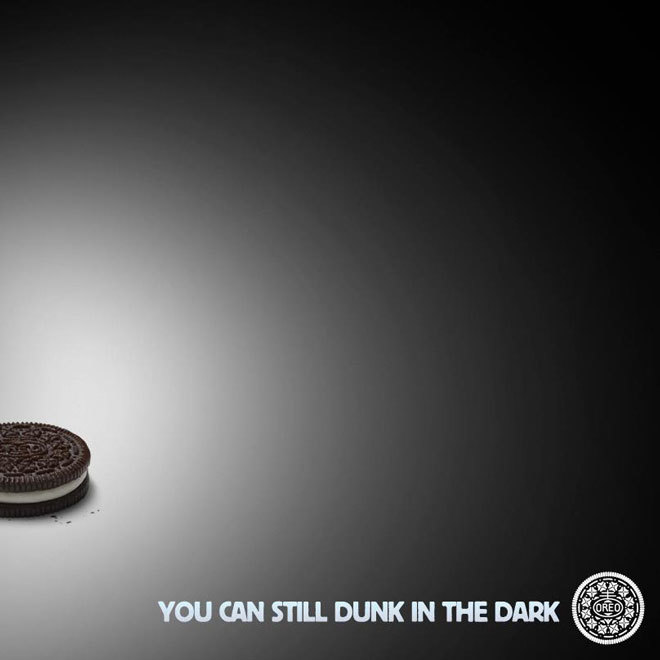 Despite the official sponsor of this edition of the Rugby World Cup being Heineken, Guinness really stood up to the challenge, launching a reactive campaign on social media. The rivalry was worsened by the fact that only Heineken could be sold within a certain radius of the event. Once again, digital channels save the day! 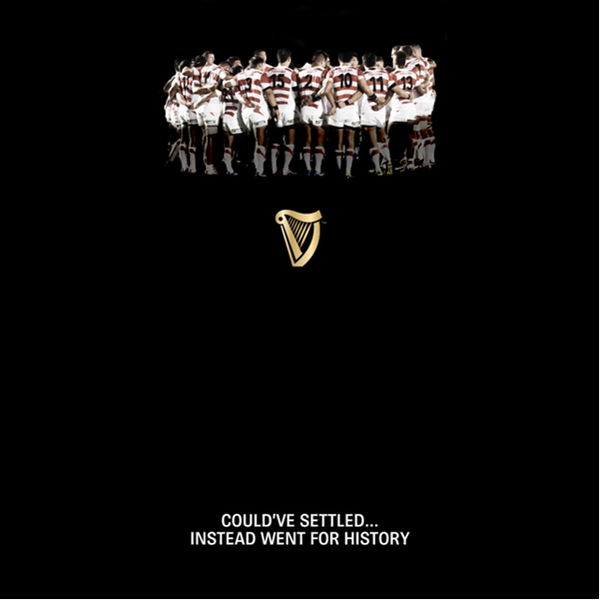 Doritos traditionally launches a ‘Crash the Superbowl Contest’ in which they ask consumers to submit videos that could air during the Superbowl. Although it’s quite a tall order for consumers, it generally has a lot of success, with plenty of Youtube viewings and has a double whammy effect – they also gain an idea of how their target market perceive their brand. The authenticity of the content generated adds remarkable value to the campaign.

With this in mind, Newcastle Brown Ale, another well-known ambusher created a spoof entry to the contest as part of their campaign – ambushing the ambusher so it seems. Marketing really is an opportunists’ game.

In 2012, there was parallel entertainment in watching Nike and Adidas compete with their campaigns. Nike, infamous for their expertise in ambush marketing, released their campaign ‘Find your Greatness’ in over 25 countries. Adidas was the official sponsors however, the Nike campaign was checked to ensure that it wasn’t in breach of advertising standards regulations. They ingeniously used London to associate their advertising flawlessly with the London Olympics, without the need to show any related imagery or reference to the Olympic rings. Incredible.

Did Paddy Power open up an underwear line? Nope. A clever ambush marketing stunt that landed Danish striker Nicklas Bendtner a €100,000 fine and a one-match ban after he decided to show his underwear to the world in the European Championships of 2012. A strange choice of player to pull the stunt due to his lack of goal scoring prowess, but it certainly proved to draw a lot of attention to the bookmaker and the man himself. Paddy Power later offered to pay the fine. 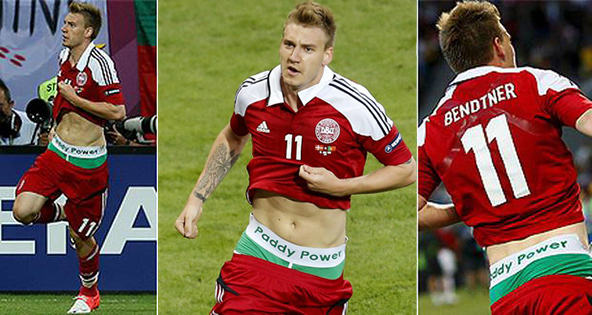 11# When ambush marketing goes too far…

A clever eye-catching stunt from Vodafone, or a step too far?

Think these are daring? You should see the campaigns that got banned. Sometimes the overall coverage a brand gets from a campaign like this, even if banned, still compensates for potential damages. Some brands even make campaigns in the full knowledge that they’ll be banned.

Got any groundbreaking ambush marketing ideas? Have we missed any from the hall of fame? Drop us a line and let us know! 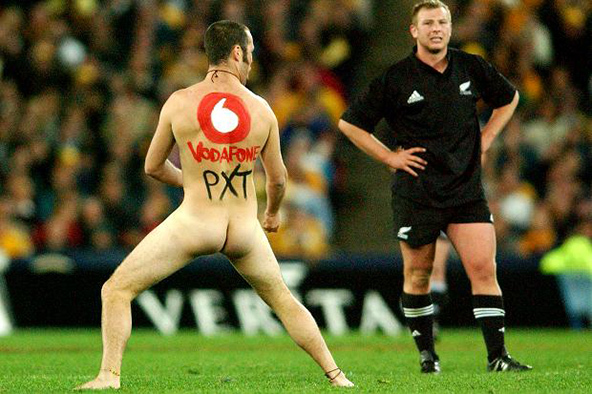