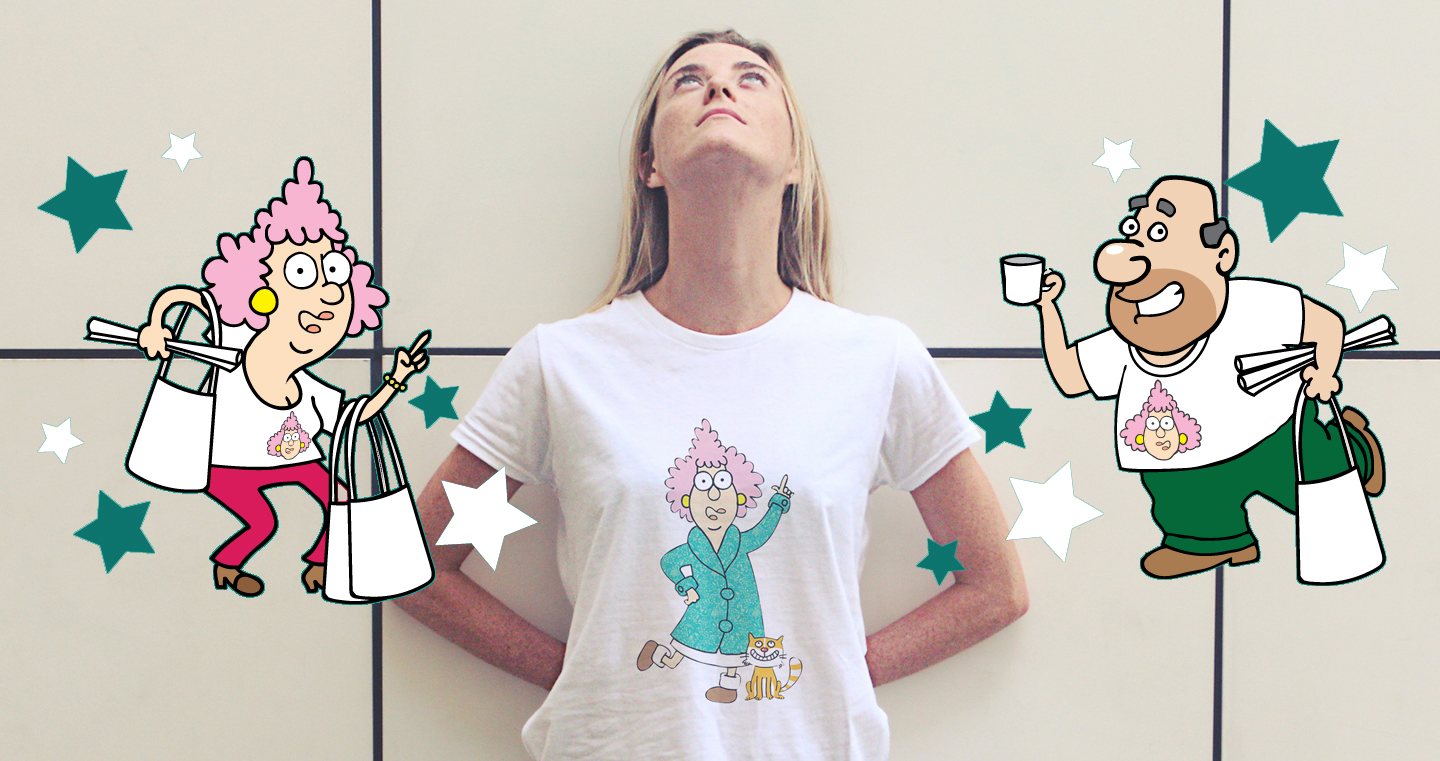 How drop shipping turned Aunty Acid into a super brand

With almost 12 million followers on Facebook, it is safe to say that Aunty Acid is a social media phenomenon. Since its inception in 2011, the witty character has gone from Facebook meme to full-on brand.

In this case study, we’ll go over how Printsome On Demand helped leverage the character’s community and launch their very first online shop.

Aunty Acid was created by Ged Backland the Managing Director of Backland Media; a small, family-run company from Liverpool. At the time of writing this article, they count with nine employees.

It all started when Backland had the idea of creating the female version of their popular characters the Grumpy Old Gits. The original concept was a woman who had a lot of life experience but was still ‘young enough to have her own teeth’ hence an aunt and not a grandma. Aunty Acid was born and she was an instant success. Quickly surpassing her male counterparts in terms of followers.

How to monetise a community

The pink-haired lady is witty but not cynical. She’s self-deprecating but not a Debbie Downer. She makes fun of others but is never offensive. And most importantly, we all know someone who’s that crazy aunt. In short, she’s relatable. Soon enough, a big community was built around her and they couldn’t get enough. Realising the potential here, Backland Media looked for a way to not just give the fans extra content but also make a profit off the character.

The company introduced a subscription program where followers can pay to get exclusive access to puzzles, special comics, a newsletter and more. This model quickly became their first source of income but they wanted to expand the brand even further.

Backland Media approached us back in late 2017 with the idea of starting a merchandise line but their needs weren’t ordinary.

At first, they approached our wholesale department but it quickly became evident that they would profit much more from our print on demand services. Not only did they have a community of engaged followers who would surely buy from them but, from the very beginning, they also knew what they wanted the merchandise to look like.

Backland Media needed a partner who could handle the production without the need for ordering garments in bulk. Thanks to a tailored deal and Printsome’s dedicated support, we were able to become that partner.

It was evident that Aunty Acid would benefit greatly from our POD app. This is a simple software that can be found on the Shopify App Store and installed directly onto any online shop built on the platform. As soon as they’re linked, the store can start benefiting from Printsome’s POD and drop shipping services immediately.

Aunty Acid’s team were one of our first customers and have experienced every stage of our App. So far, there have been three renditions: the first one, which we consider the ‘Alpha’, the second (or ‘Beta’) and then the ‘1.0’ version* which is the one that’s currently live.

*At the moment, we find ourselves using the feedback from Aunty Acid and other clients to build the ‘2.0’ version which is scheduled to be released in autumn 2019.

If they had chosen to go for a traditional business model, they would’ve had to order in bulk and store that stock somewhere until the units ran out. If you take into account the many different designs they wanted to make, that would’ve been a huge amount of garments. Basically, it was very impractical and not to mention unwise from an economic standpoint.

Since the garments are printed at the moment, then there’s no need for an inventory. This business model gave Backland all the room they needed to experiment with different kinds of designs without any risk or compromise.

With almost 12 million followers on Facebook, it is understandable that many of those followers would be located in foreign countries. While some of their fans are in the UK, most of them are located in Europe and the US so in order for this branch of the business to become successful, they needed to cater to them as well.

Thanks to Printsome’s drop shipping service, there was no need for Backland to ignore their international followers. We can ship to most countries around the world. For more information on our rates and delivery times, feel free to check out our FAQ section.

The shop was officially launched in August 2018 with a range of Aunty Acid products (T-shirts, books, mugs and calendars) and quickly became our best-selling customer of the ‘Alpha’ print on demand app. Not only that, but a month later, they had doubled their sales.

Thanks to the success of the character’s products, Blackland Media quickly realised that there was an opportunity to expand. That same year, they launched a campaign for the Christmas season which highlighted Aunty Acid’s merchandise and a new series of products:

That Autumn, we saw Little Mouse Church being added to the online store. This is a cute mouse designed for a more religious/conservative crowd. This brand talks to a completely different audience than Aunty Acid’s but upon closer inspection, we’ll see that there’s an overlap where some people enjoy both. This prevents the mix from becoming too jarring.

The idea was to not only offer merchandise based on their popular characters but also design products inspired by other subjects that would not necessarily appeal but surround their core audience.

Blackland Media released the second series of garments aimed at the Aunty Acid audience but, this time, the witty woman didn’t appear anywhere. Instead, the strategy was for these T-shirts to be bought as Christmas gifts for others. Much like shaving cream brands, the target of the campaign was not the end user of the product.

Thanks to an extensive study on the demographics of their followers, the studio was able to design merchandise that would appeal to them. These included Brexit jokes, references to potheads and (the most popular) profession T-shirts.

These are the designs we print for them:

The campaign was a huge success and ended up amounting to 30% of their total sales that year.

Backland Media is a master class on how to monetise a community. They prove that it is not only possible to expand a brand but also launch a scalable business in the process.

It was Aunty Acid’s popularity that allowed them to first launch a subscription service for exclusive content and then later a merchandise shop. But they didn’t stop there. It would’ve been easy to just stick to their well-known IPs (intellectual properties) but they saw another opportunity.

By studying the demographics of their followers, they realised they could expand beyond and create products inspired by a wide range of different topics, from professions to potheads and even Brexit. This is a case study on how to target consumer interests rather than direct interests.

With so many designs, they needed to find a print-on-demand service provider. Someone who could create the products in real time and ship them to the final destination. We were more than happy to become that partner.

Thanks to a tailored deal, Printsome is able to offer just that, and then some!

Here at Printsome, we’ve always supported creative endeavors which is why we’re proud of our print on demand in Europe service.

Thanks to our five years of experience in the T-shirt printing industry, we were able to design a platform to cover a T-shirt fulfilment service catered towards the needs of artists, designers, Youtubers who have their own T-shirt line. Printsome’s Print on demand service has no minimum orders and can print any design with no colour limitations.

From the moment you connect your online shop with our Shopify T-shirt fulfillment platform, anyone can buy one of your designs. We deliver all over the UK, Europe and the rest of the world. T-shirt drop shipping has never been this easy!