I’m a bit of fashion addict: I love the experience of developing my own personal style along with custom clothing and personalised t shirts. Excitement bubbles through me every time I discover unique pieces in obscure little shops or the perfect item in the bottom of the £2,99 pile during sale season. But just because my shopping style is a little out of the box, doesn’t mean I don’t pay attention to the latest fashion trendvs. Case in point: band t-shirts that you don’t know.

It was with a raised eyebrow and an inquisitive look that I stood in the middle of a popular shop, staring at Nirvana hanging on the wall. The design looked cool, the t-shirt was completely rock and roll, but I couldn’t help but wonder: does a band t-shirt belong in a regular clothing store?

After that encounter I started to notice band t-shirts everywhere, and realised they were the focus of a debate between two opposing groups. On the one side we have those who love the new trend. You know, the proud new owners of a handful of band tees, or people like Lauren Elizabeth who simply advocate for freedom of choice.

On the other side we have the devoted music fans, like James McMahon who can’t help but feel a sense of outrage at the fact that rock and roll is, in some cases, being used as a fashion accessory.

That being said, let’s take a look at some of the most famous types of band t-shirts.

This one is self explanatory. Simply put, a t-shirt that features the cover of an album. 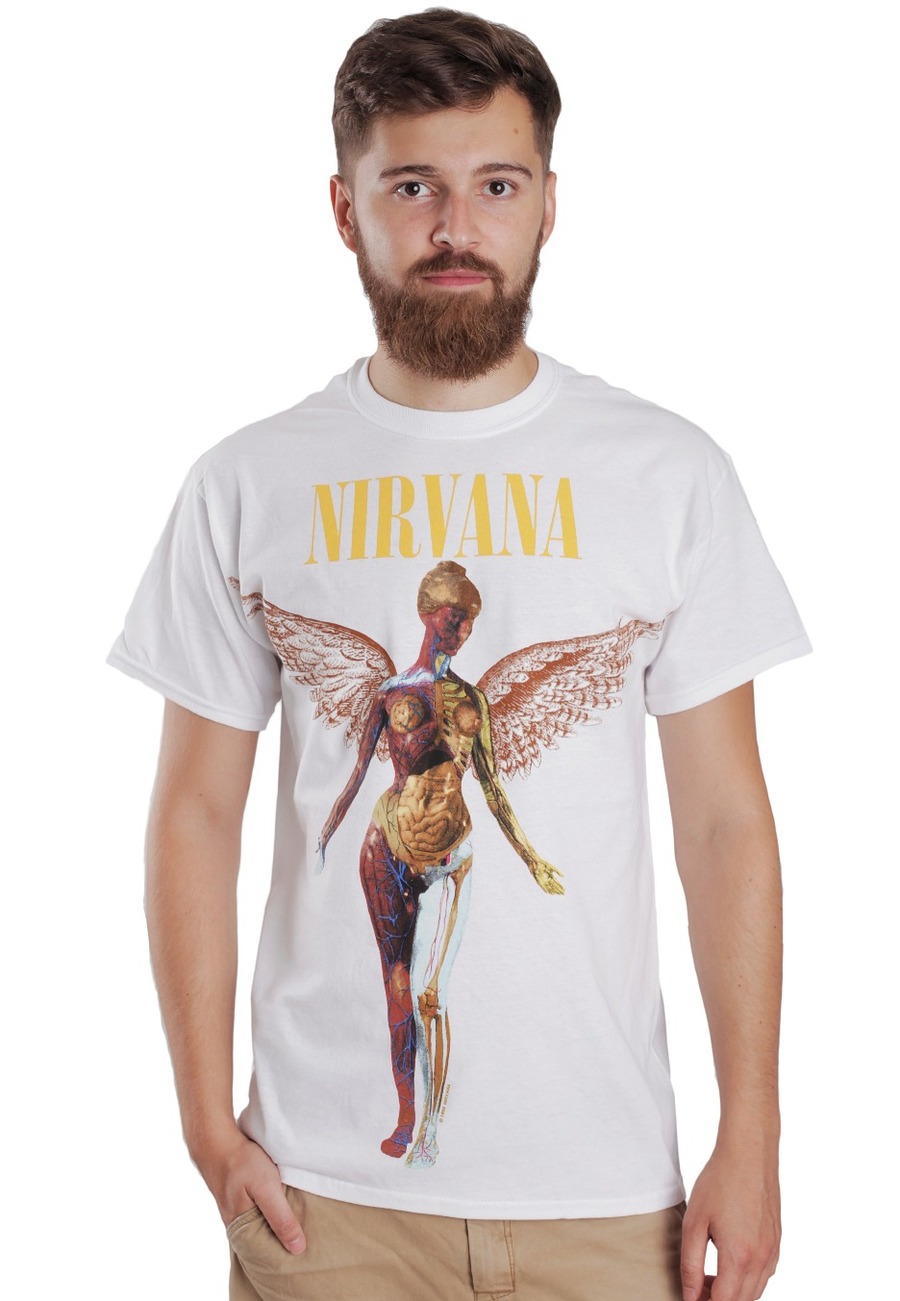 Even if someone doesn’t know Nirvana (blasphemous, I know but stranger things have happened) they would probably still recognise this image. That is how iconic this album is. The cover of In Utero was meant to reflect Kurt Cobain’s relationship with his and his band’s new found fame. 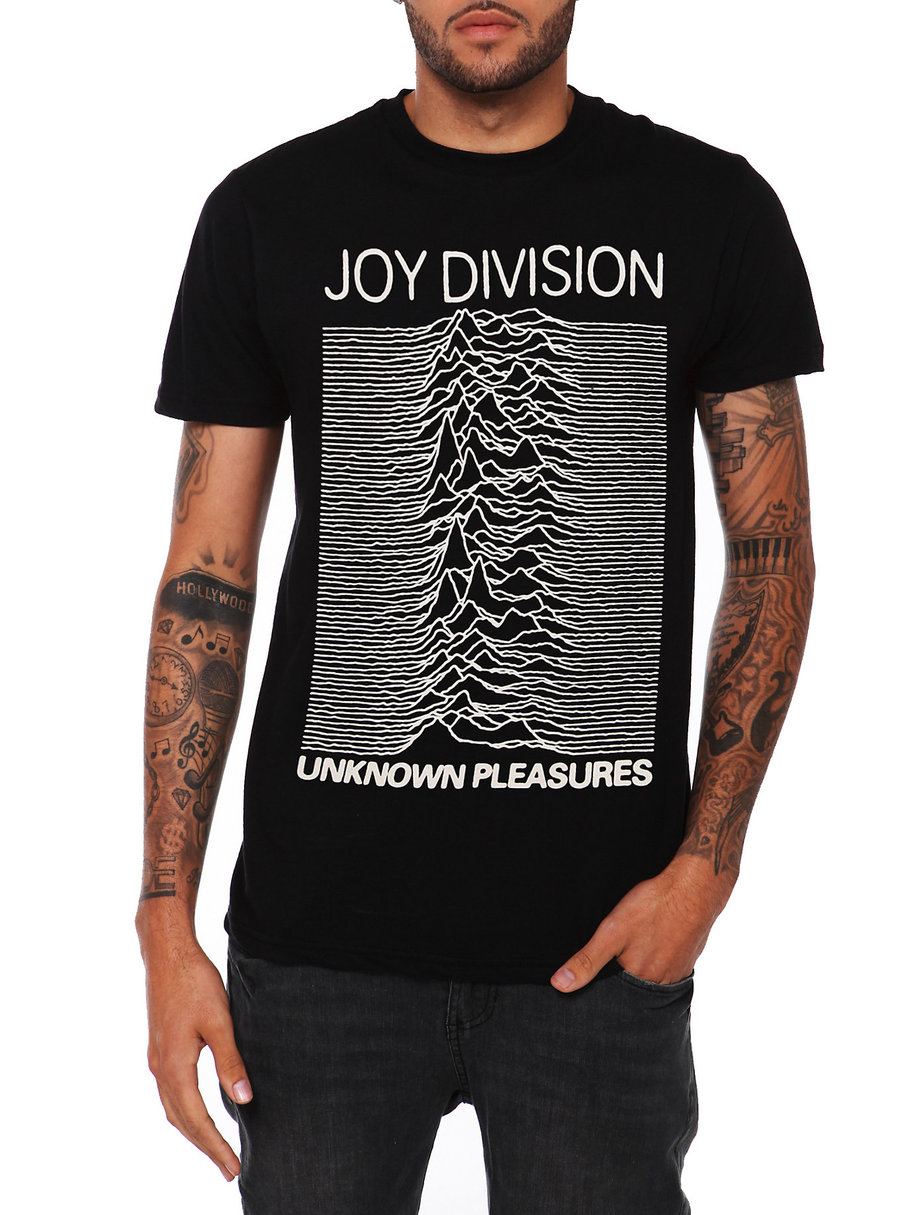 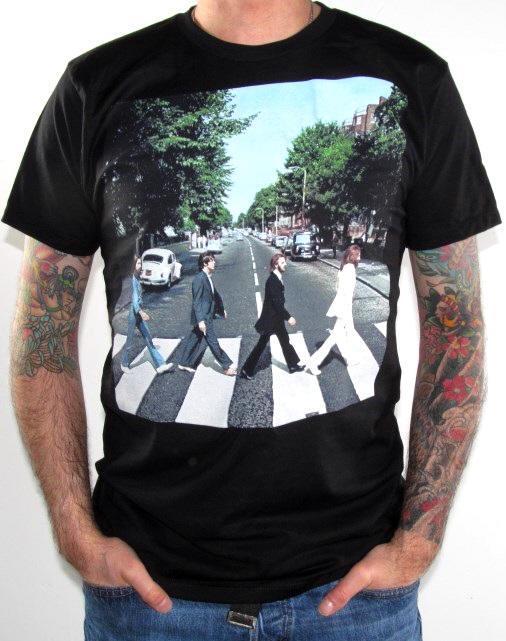 What can be said about the Beatles or Abbey Road that hasn’t already been said before? Yes, it’s iconic. Yes, we’ve all taken the picture of ourselves walking on that same street.

More typical for pop stars than rock bands. This type of band t-shirt features a portrait or a full-body shot of the frontman or entire band. 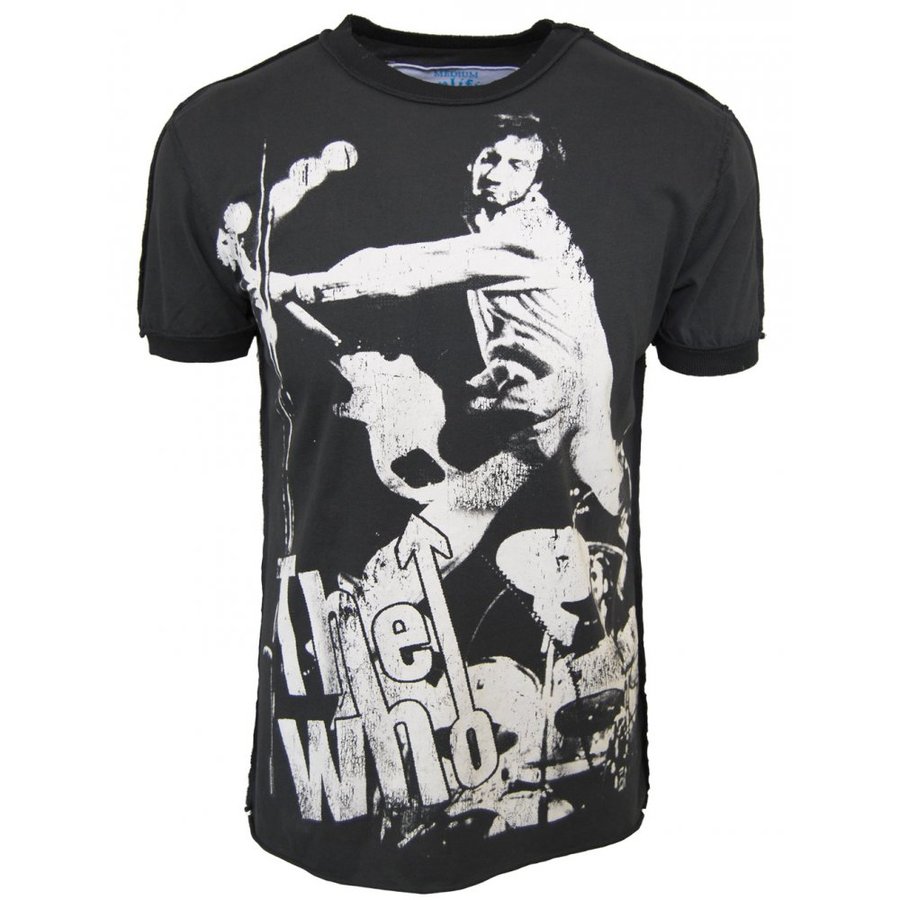 This The Who t-shirt features frontman Roger Daltrey during a live performance. A nice break from the usual posed photo shoot picture. 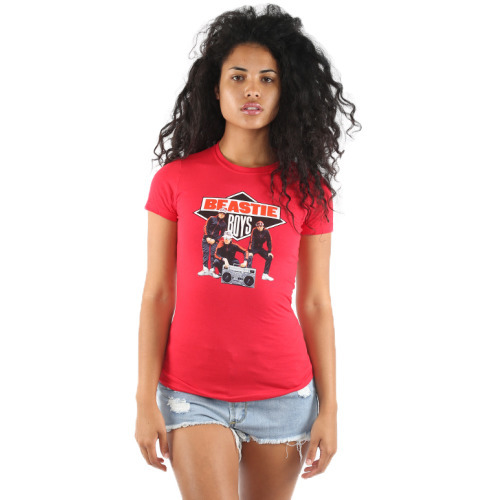 The Beastie Boys are looking cool as always in this women’s garment. 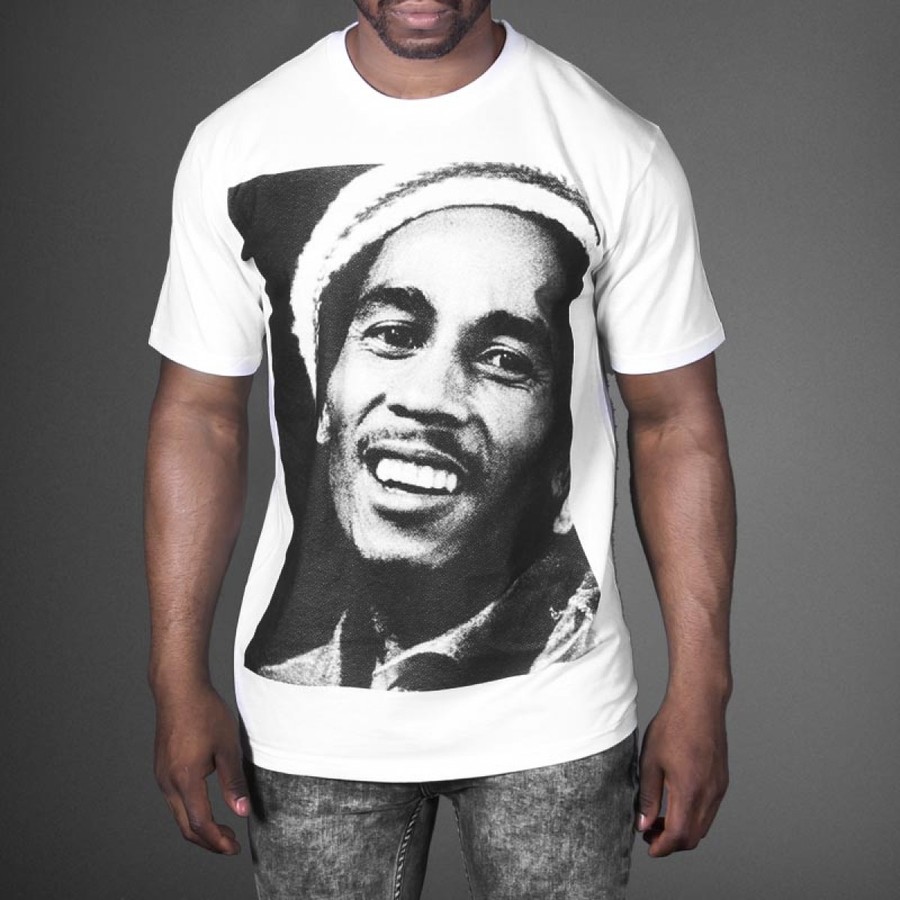 The only other face that has probably been printed on more t-shirts than Bob Marley’s is Che’s.

King of souvenirs, the tour t-shirt is the t-shirt that’s designed to be sold during a concert tour. Usually overpriced, they tend to feature the concert dates on the back. 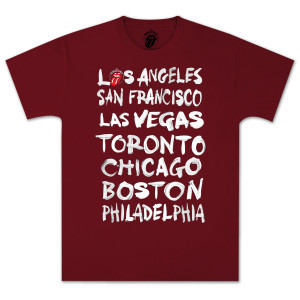 The Rolling Stones (or their marketing team) decided to shake up the formula a little bit and print the cities on the front of this t-shirt for their 2013 tour. 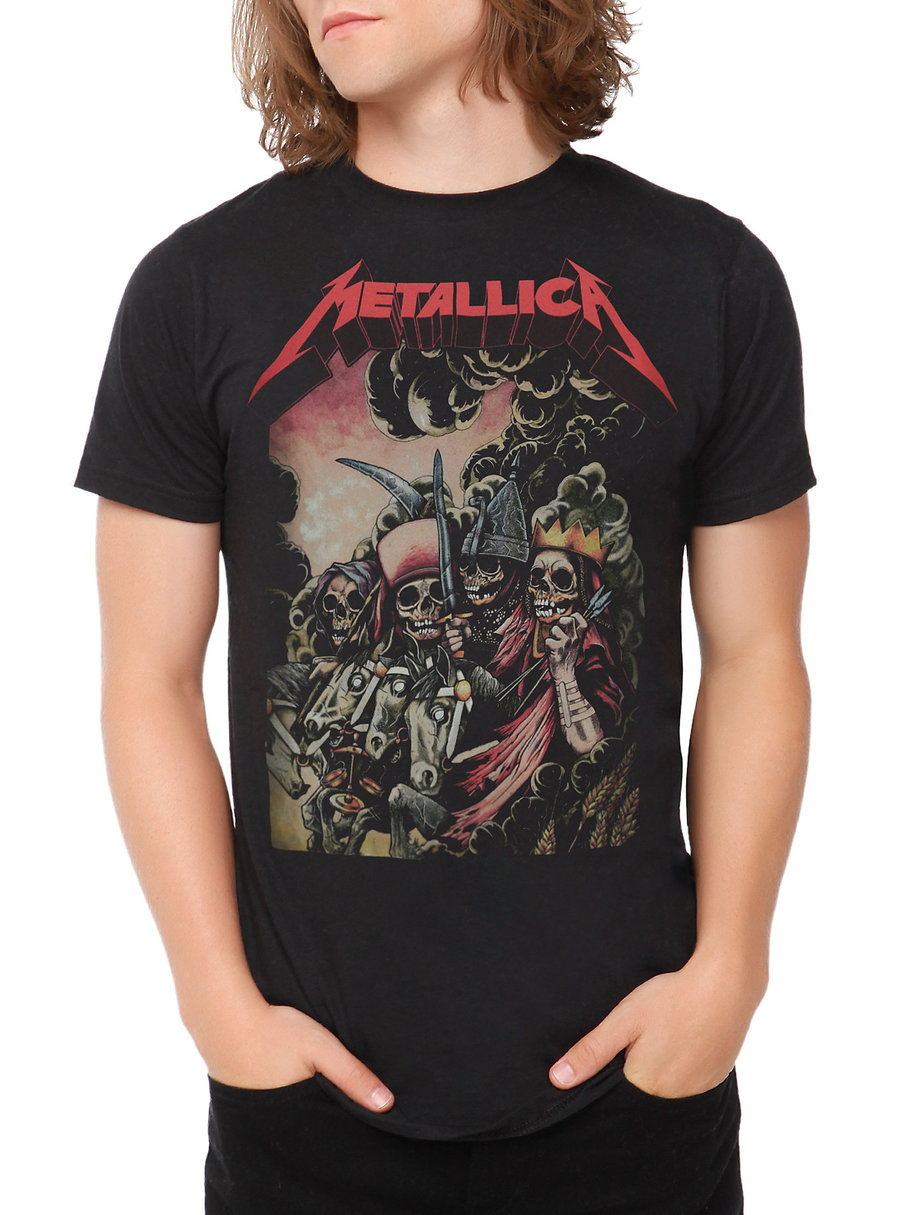 This Metallica t-shirt is your typical concert tour souvenir garment. On the front it features the official tour image and on the back, you’ve got all of the presentation dates. 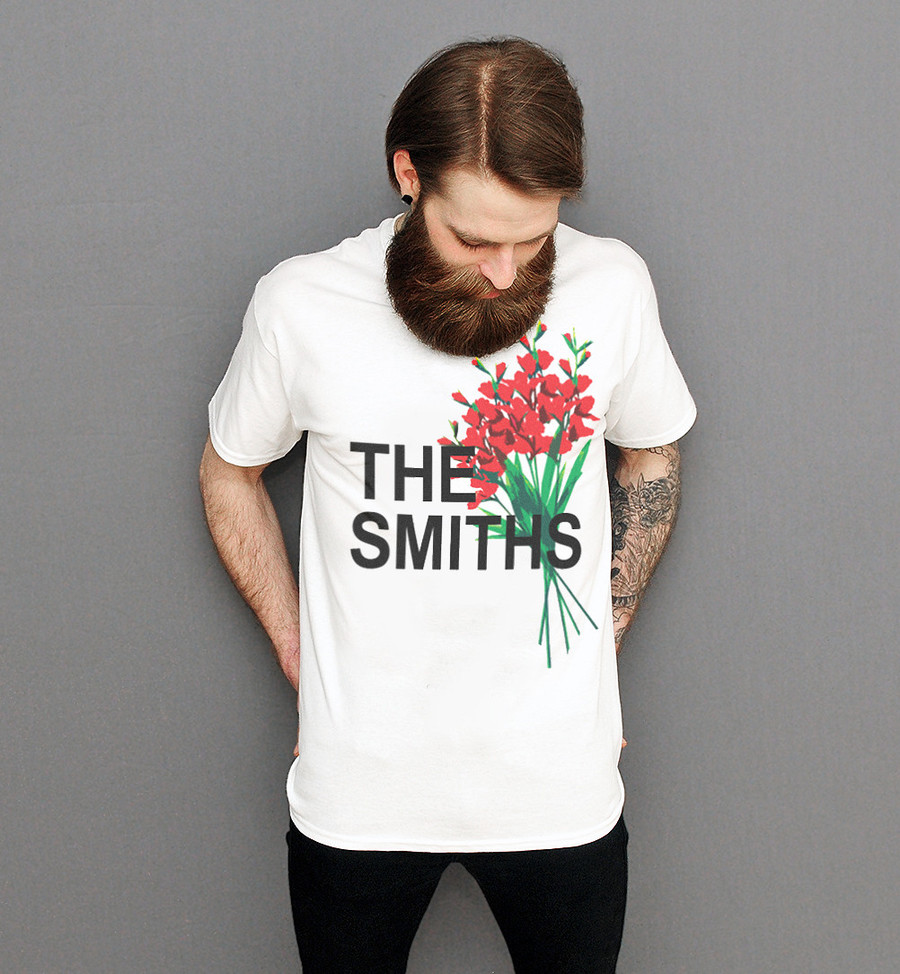 As part of The Smiths 1984 tour, this rare t-shirt (Gladioli) was sold to fans during live performances.

As I mentioned before, when bands get to a certain point of fame, they stop being musical acts and become brands and that includes its very own logo and slogan. This t-shirt features just that, the band’s logo which can either be a graphical representation of the name or a different icon they may have chosen to represent themselves. 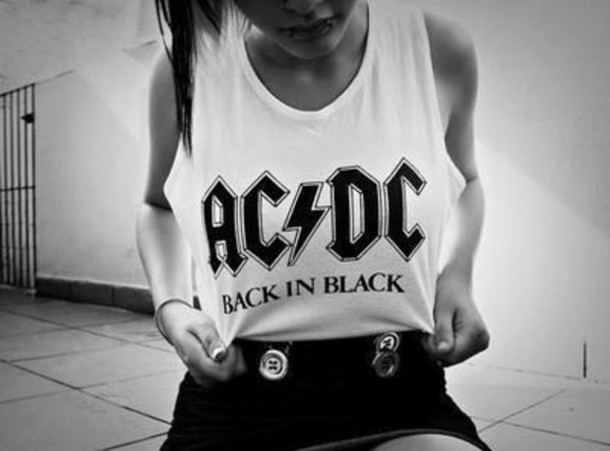 This AC/DC t-shirt is as classic as it can be. As one of the most popular band tees ever, this one sits in most rock fans’ wardrobes.

The one that started it all. Personally speaking, the Ramones t-shirt is less a conversation about how bland culture has become and more about how good design can transcend barriers. 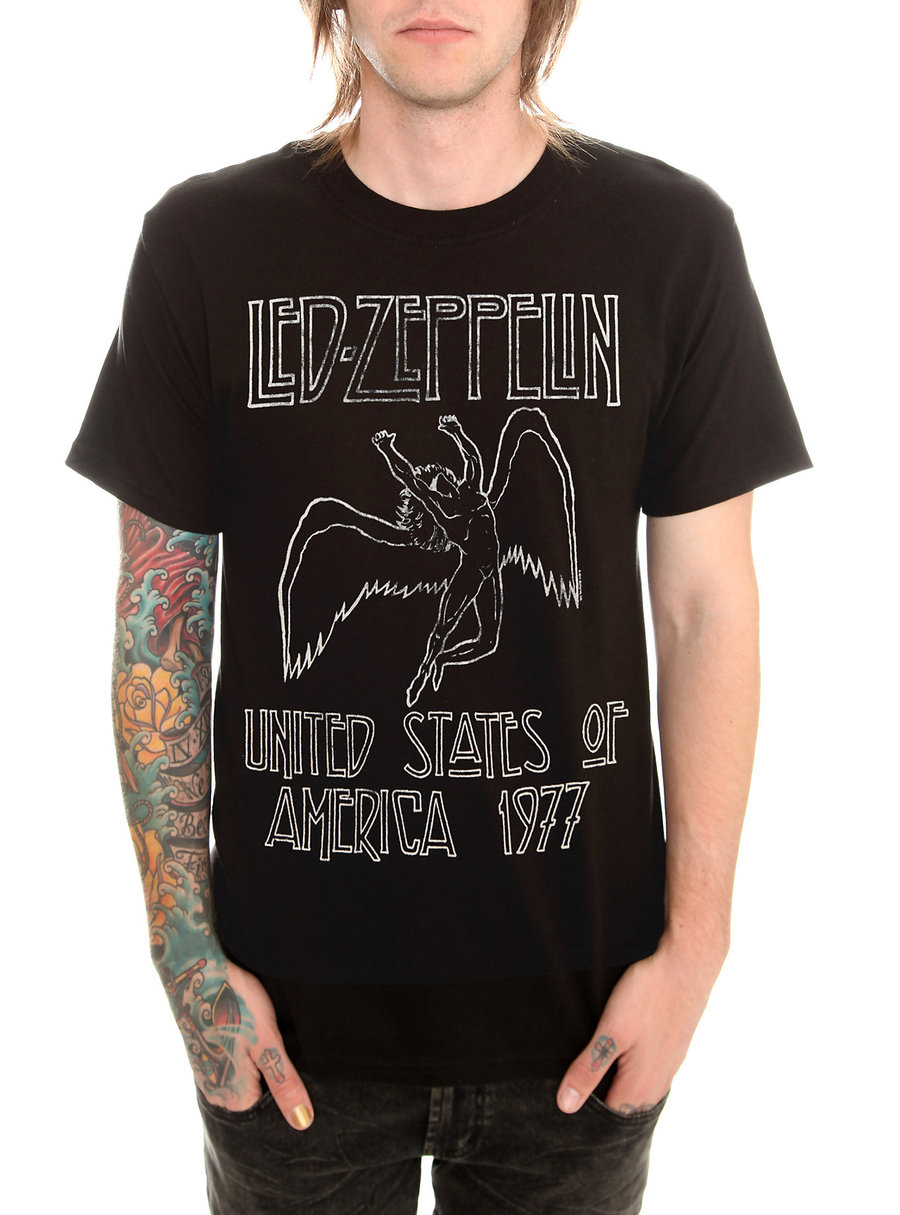 What most people believe to be a fallen angel or Icarus, it actually represents Apollo, the Greek god of light and music. Probably inspired by American painter William Rimmer’s Evening (The Fall of Day), the logo has been synonymous with the Led Zeppelin name ever since it was first introduced.

Run-D.M.C. is one of the most influential Hip Hop acts to ever exist. Even though the band has long stopped producing records, its memorabilia is still worn as a testament to their relevance.

A mascot is a virtual spokesperson for an brand or group. They’re sometimes believed to bring luck and give a face to an otherwise soulless organisation. In music, heavy metal bands have a history of mascots. They’re so alive, in fact, that they often have Twitter conversations with each other. 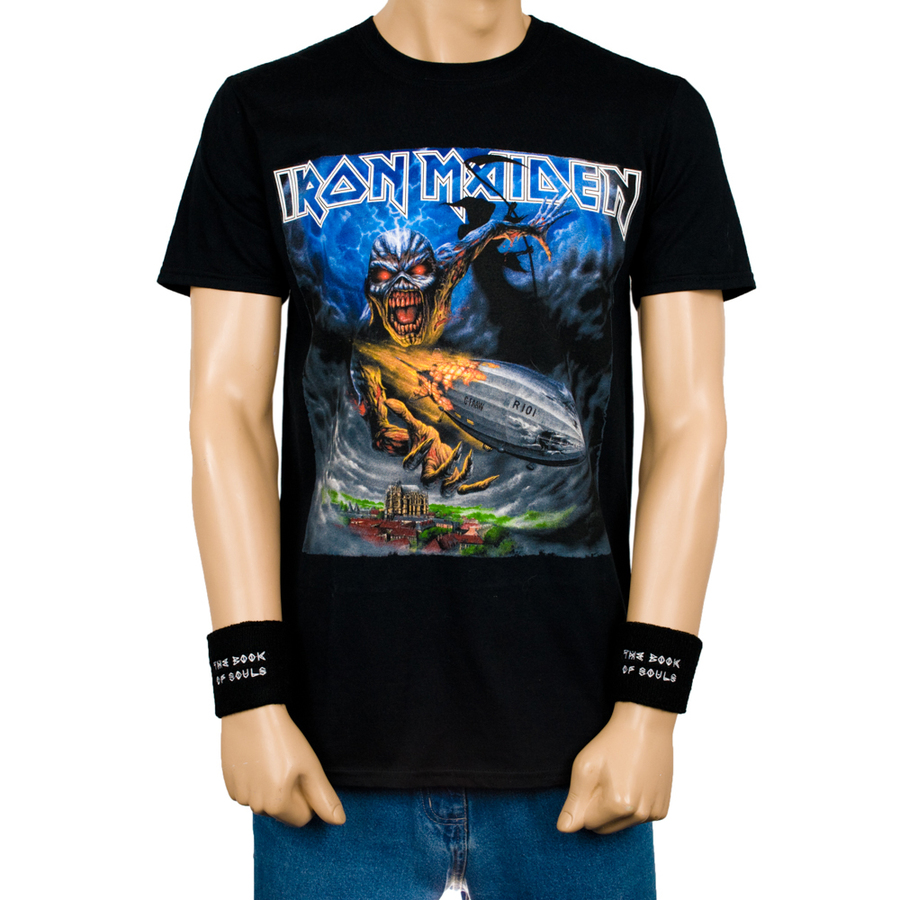 Eddie the Head is the famous mascot from heavy metal band Iron Maiden. The zombie has been featured on all of the band’s album covers, countless merchandise and is about to star in his very own video game.

Snaggletooth is the name given to this British band. Even though it’s just a floating head, it inspires fear and respect. 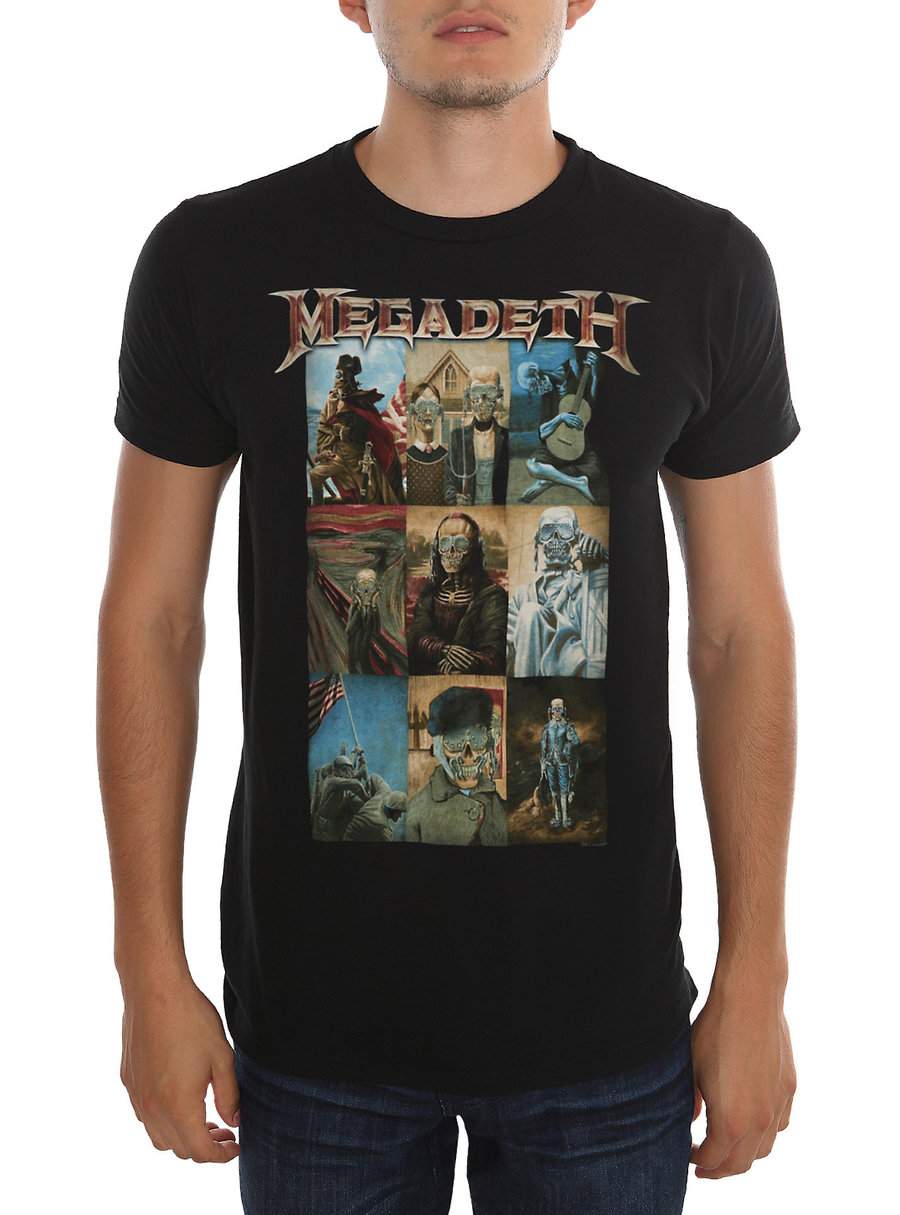 The One Inspired by a Song

As the name suggests, this t-shirts are inspired by one of the band’s song. They may feature lyrics or a graphical representation of the track. 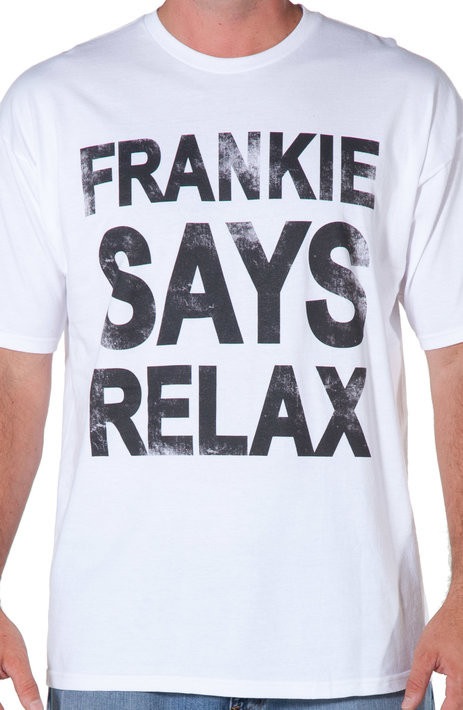 Like the Ramones, this is one of those cases when the t-shirt almost eclipses the band it originated from. Frankie goes to Hollywood was a popular English rock band in the 80’s, and only became more famous when in 1984 the BBC banned its single Relax because of its suggestive cover and lyrics. 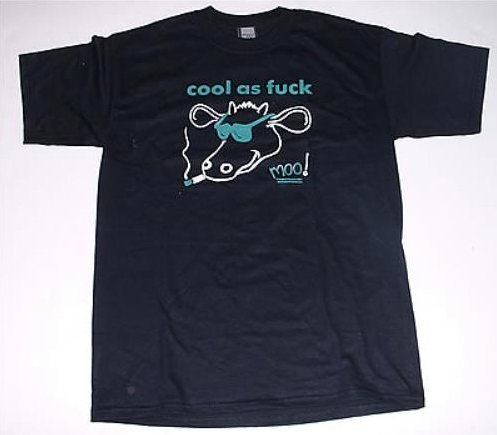 Another example of a t-shirt becoming a bit too famous. According to Wikipedia, some say that the band sold more t-shirts inspired in the Cool as fuck track than records. 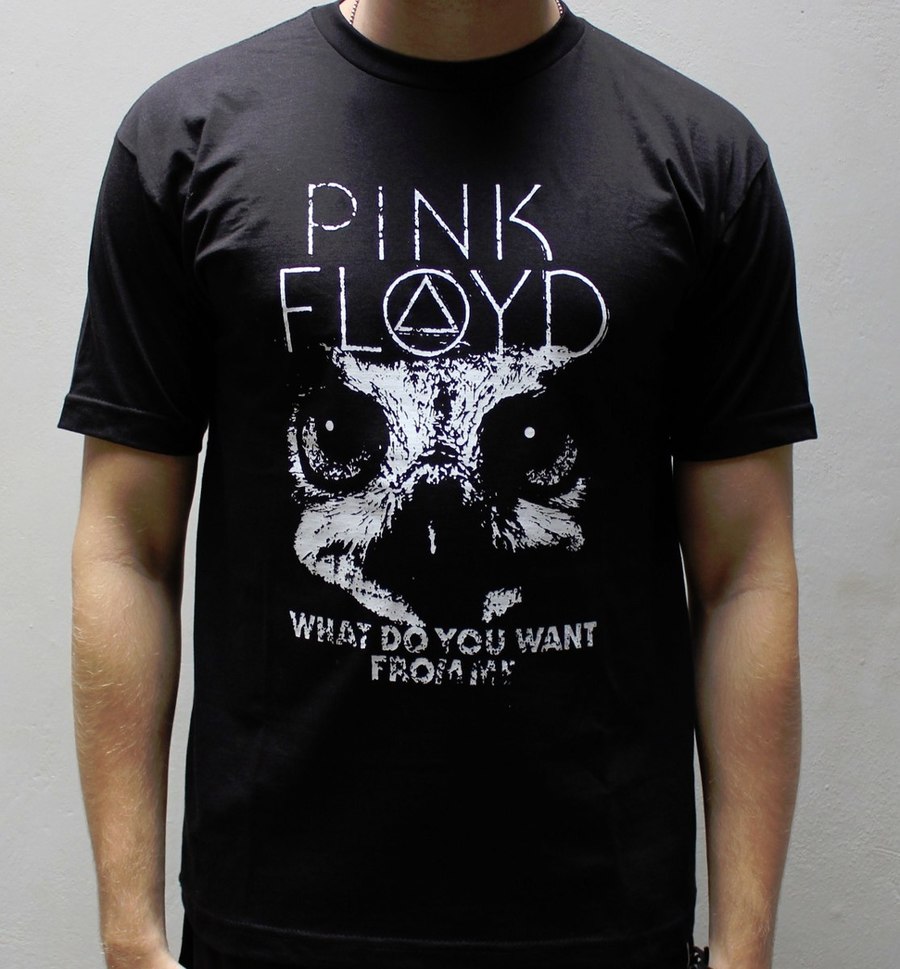 A tee inspired by the What do you want from me? song by Pink Floyd.

Reactions to the Band T-shirt Quibble

So many people have strong opinions on wearing band t-shirts that there have even been Facebook pages created around it, like “People who wear t-shirts of bands and don’t know who the band is suck“. This page in particular was only active for about a year, but it’s still worth a visit for it’s amusing posts. Like the one where we see a picture of a dog wearing a Sex Pistols t-shirt with the caption “I’m inclined to assume this dog cannot sing along to “Anarchy in the UK.”

Do you Have to Know the Band to Wear their T-shirt Logo?

Back in the day, when you bumped into someone wearing a concert t-shirt, it meant that they had actually been to that event. And if you saw someone wearing the Ramones, chances are that the person would not only know all the lyrics, but would mention some obscure, bootleg version as their all-time favourite song.

Those who stand against the trend argue that culture has become bland. People no longer stand for anything and will wear anything as long as it’s “cool” or “trending”. A point to be made here, is that it’s got less to do with what people believe in — since thanks to social media everyone has got opinions and beliefs — and more to do with the way fashion works now a days. We live in the age of streamed music, Youtube celebrities and fast-clothing. Stores like Zara and Primark don’t change collections twice a year, but once a week! In order to cope with the high demand, designers no longer have the luxury of being “inspired” and have to take from where they can and if this means bastardising a recognised figure that already’s got followers then the better.

But that still doesn’t answer, does not being a fan mean you can’t wear a t-shirt with the band logo even if you absolutely love it?

Personally, for the same reason you shouldn’t get kanji characters tattooed to your arm if you don’t speak Japanese, I believe you shouldn’t promote a logo if you don’t know what it means. Graphically speaking, the swastika is a cool symbol, but you probably wouldn’t be caught dead wearing one, now would you? Because you know what it means to most people. The sign actually predates the Nazi party by several centuries and it even had a positive connotation, but knowing this, won’t make a difference because now a days we can’t look at one without thinking of genocide.

You’d probably argue that I’m exaggerating, or being dramatic (and there’s a chance you wouldn’t be wrong), but think about it, aren’t out there artists that promote violence, hate and prejudice? There’s a list of neo-Nazi bands in Wikipedia, for crying out loud! What if you ended up wearing a t-shirt of one of these bands just because you thought the graphics were cool? Would you feel okay wearing a genocide t-shirt? I didn’t think so.

On the other hand, when a band becomes so famous that they launch their own products line and have their own airplane they stop being a band and become a brand. And while marketers may want you to believe otherwise, there’s nothing holy about brands, they just want to sell. A small fact that rock fans who loathe non-fans wearing band t-shirts fail to recognise is that their precious groups (or their management) has sold the license to the High Street store to produce their t-shirts. H&M can’t sell a KISS tee without permission — they’d be sued for life. Look at what happened to Topshop when they tried to be cheeky with Rihanna. On the bright side, the money they make from the licensed products can be spent on producing new music (or buying another airplane).

That being said, I also believe that everyone should wear whatever makes them happy. Whatever that may be. And nobody has the right to tell you what you can or cannot wear. Fashion is a way to express ourselves and it shouldn’t be taken too seriously.