Stories of Belfast: T-shirts inspired by the capital

“Belfast is a city which, while not forgetting its past, is living comfortably with its present and looking forward to its future”

So said Northern Irish actor James Nesbitt about the city we’re stopping by this week for our T-shirt series: the capital of Northern Ireland, Belfast.

There are lots of aspects of this city’s past, present and future that we want to celebrate and one of those is its tradition of fantastic storytelling. Some of them are real and other are fictional, but they’re all fantastical and will remain in our collective consciousness for generations to come.

We hope you enjoy the newest edition of our British cities inspired T-shirt lines.

Note: If you’re looking for T-shirt printing Belfast services, don’t forget to give us a call. We’ll get you sorted out in no time! 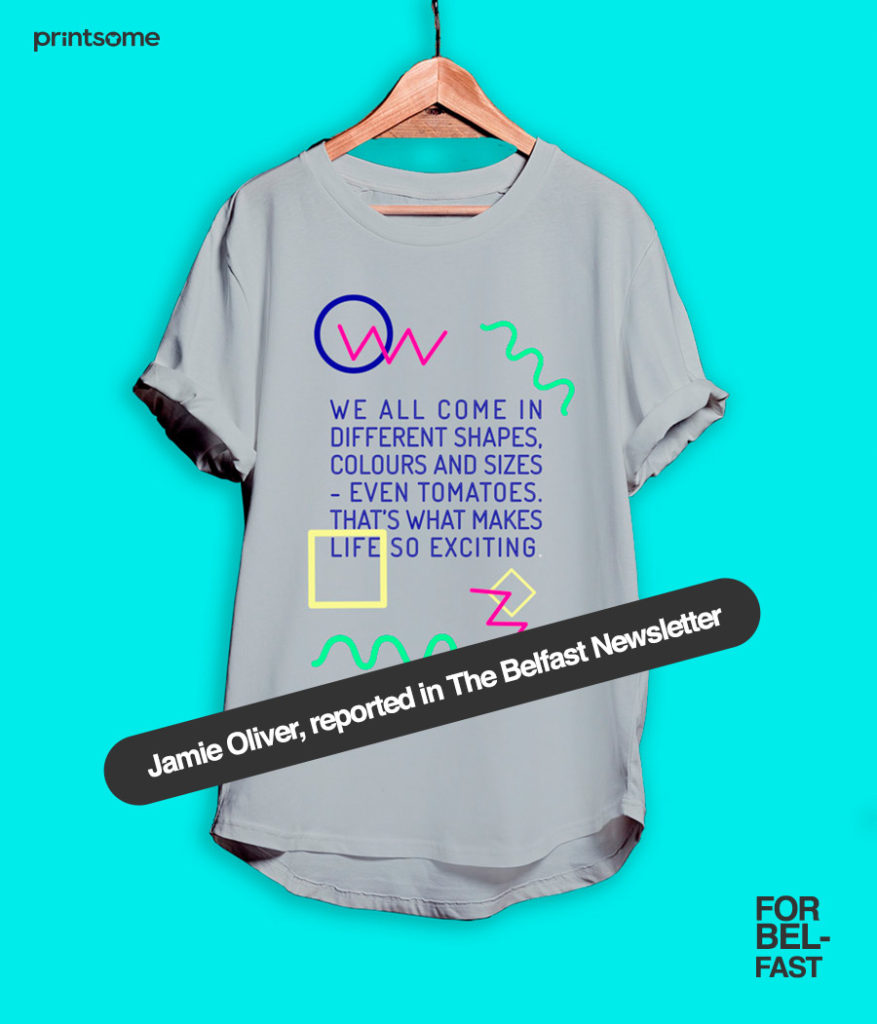 Founded in 1737, this newspaper is the oldest English language paper that’s still published today! When the newspaper started, it was published three times a week, but by 1855 it had become so popular that it switched to daily print permanently. Today, the masthead reads “The News Letter”, though it’s still got “Belfast” in its legal name. You can read issues that date back as far as 1828 at the British Newspaper Archive. 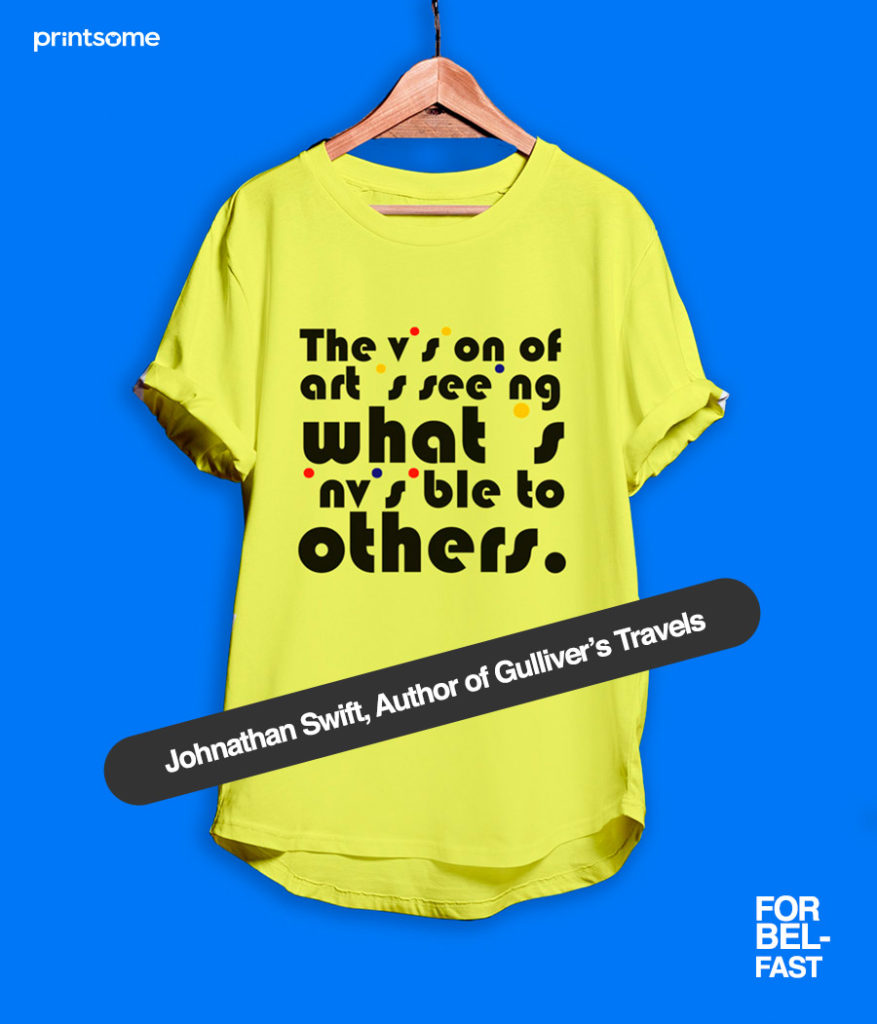 Though Swift hails from Dublin, he was inspired by a few key places in Belfast for his novel Gulliver’s Travels. The writer travelled all over the Emerald Isle and added a few of the places he liked best into his satirical book. They say the hillside called Napoleon’s Nose that overlooks the city gave him the inspiration for a giant toppled over lying on his back, and the tiny Lilliputians are said to be named after Lilliput Street — an actual street in the Northern Irish capital. 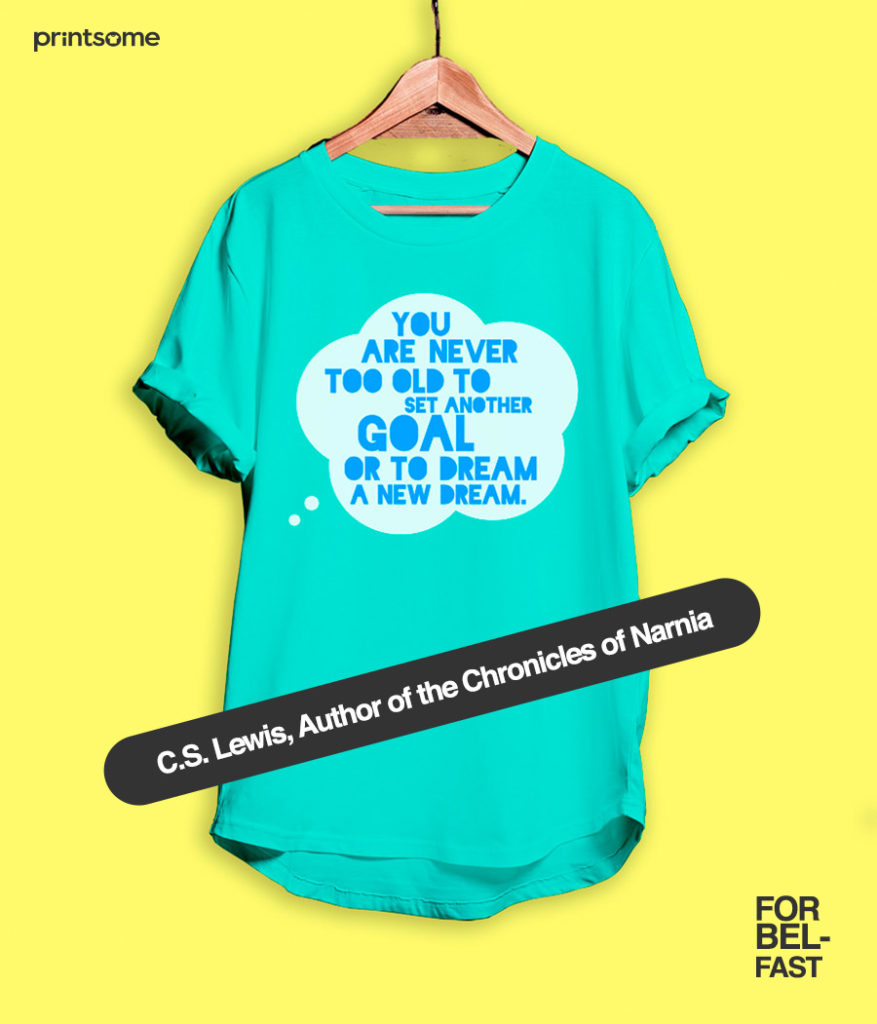 One of Belfast’s most famous native sons is Clive Staples Lewis, who was born here on 29 November, 1898. Of course, today he’s better known as C.S. Lewis and as the author of The Chronicles of Narnia. He moved to England to study, and maintained a proud love for his heritage, once writing, “There is no doubt that the Irish are the only people: with all their faults, I would not gladly live or die among another folk.”

If you’re in Belfast, stop by The Searcher statue, which shows Diggory Kirke, a character from The Magician’s Nephew, opening the famous wardrobe. You can also visit the C.S. Lewis Reading Room at Queens University, which features a door styled to look like the same magical wardrobe. 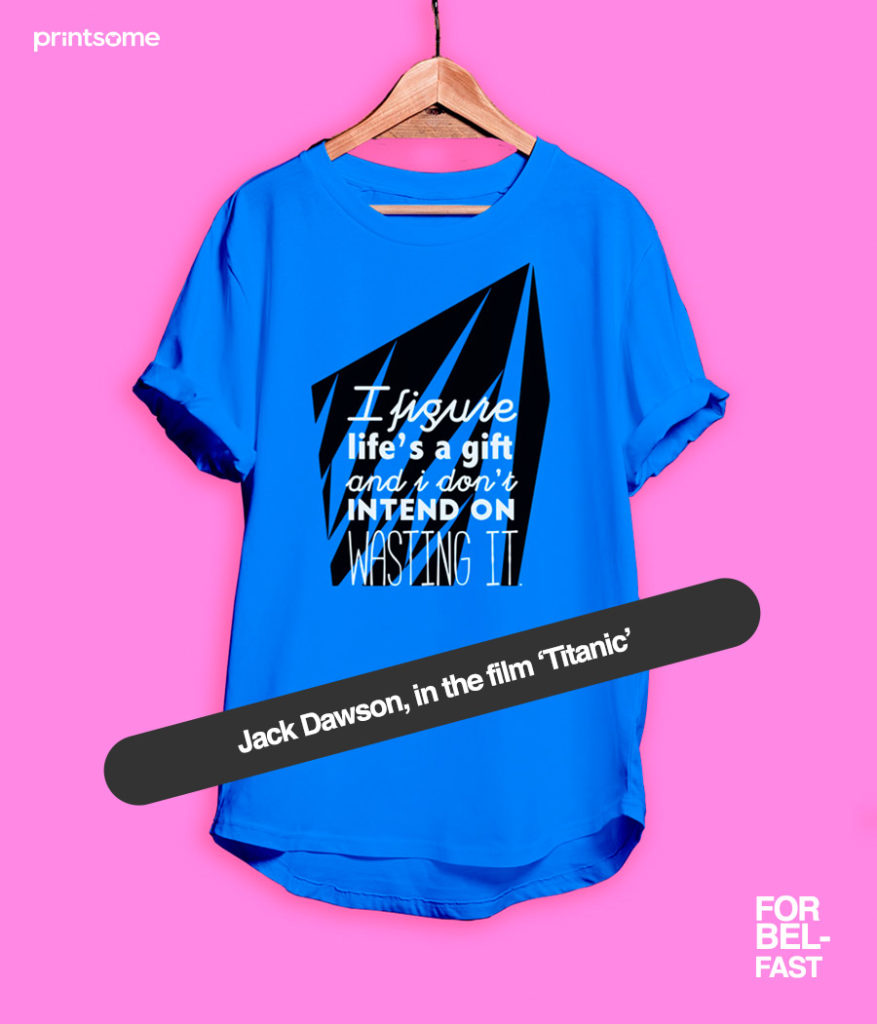 Belfast has a long maritime history…though the RMS Titanic is almost certainly not its proudest moment. Though a tragic event for the poor souls aboard, the ship’s sad story has translated into mega-bucks for Hollywood, and for Belfast, too.

It was built here in Belfast at the former Harland & Wolff shipyard. This area is now called the Titanic Quarter and features film studios, housing, entertainment and historical landmarks. You can also see a massive six-story exhibition all about the RMS Titanic itself, and even take afternoon tea by a replica of the ship’s staircase. Please leave your Celine Dion impressions at home. 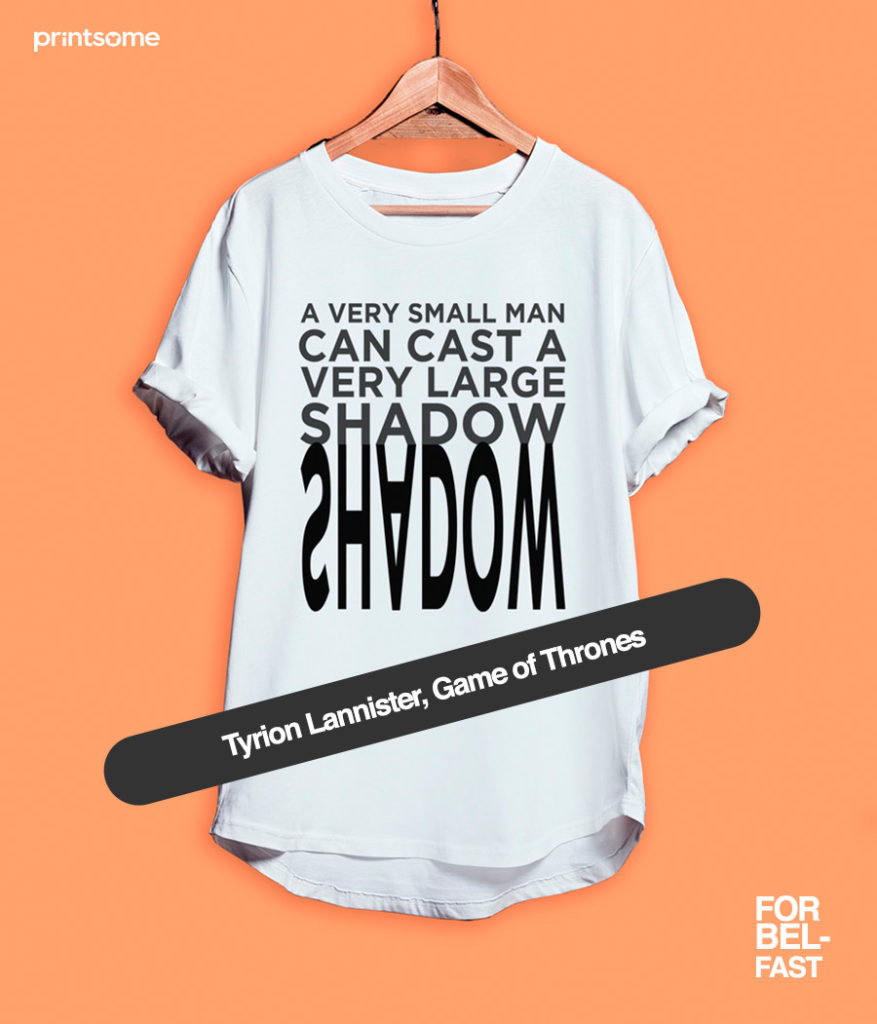 Another blockbuster storytelling moment has ties with Belfast, and that’s Game of Thrones.  Did you know that the series is filmed at the Titanic Studios we just mentioned? They’ve used plenty of locations to film in and around Belfast, and there are a slew of tour companies who would be thrilled to take you around them for a fee. One of the biggest draws is Castle Ward, which is about an hour away and the setting for Winterfell.

Side note: do you think more people die in the entirety of the Titanic film or in your average season finale of Game of Thrones? 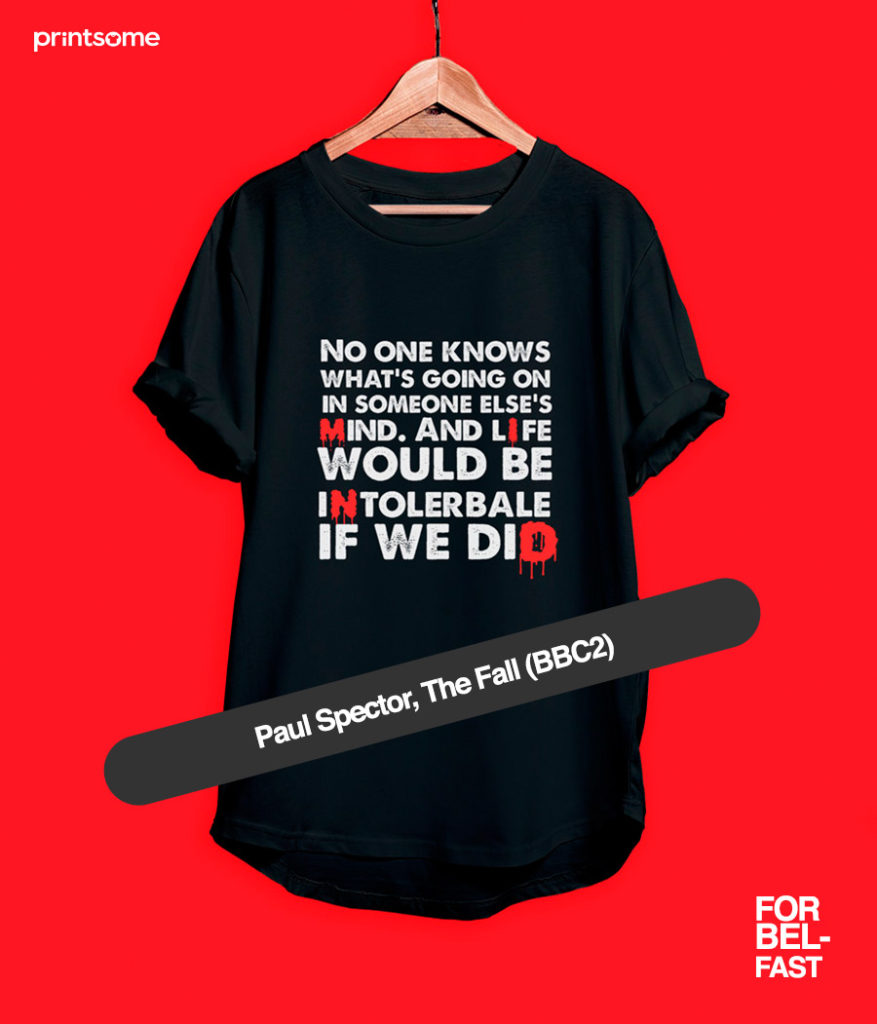 This television series isn’t massive like Game of Thrones, but it is a definite Belfast production. Set in the city and starring Belfast-raised Jamie Dornan, this creepy police series was an instant hit with critics. The third series recently debuted, and if you’re looking for a thriller to get sucked into this weekend, give it a go. I couldn’t stop watching it!

If you’re curious about where exactly The Fall was filmed, this interactive map pairs map locations with scenes from the series. Click on a location and the clip filmed there will open up.

So we’ve talked about Belfast’s past and present, which leads us to expect fantastic things from this city as we look forward to the future, bringing us back to our quote from James Nesbitt. We can’t wait to see what new stories will be told here next!

Not a fan of Belfast? Maybe you prefer Bristol, Birmingham or Bath  – and those are just the B cities we’ve visited!

We’re a T-shirt printing agency in the UK in London, delivering from Hull to Canterbury. We love writing about t-shirts, but also about creative marketing.