T-shirt Printing Birmingham: A label inspired by the city

So when started investigating Birmingham, I was shocked to discover the number of things I use on a daily basis that were invented there.

As part of our imaginary labels inspired by UK cities series, this week we bring you ‘Inventees’ a T-shirt line inspired by Birmingham and it’s incredible relationship with inventions. The idea of this exercise is really to demonstrate how we can develop a brand from a basic conceptual starting point — in this case, a city.

Birmingham is a slightly bizarre name for a city, and though not as bizarre as the name Towcester (pronounced ‘toaster’), like many English cities, there is logic in the name. In this case, Birm refers to its original leader, ham means home of the people and ing means’ of the people’ means home (ham) of the people (ing) of the tribal leader Birm or Beorma. For the locals, it’s simply Brum.

Whether it’s because Brum is the second largest and populated city outside of London, or due to the rich immigration history in the area, the Brummies seem to be very creative people.

Little do you know it, but you rely on them for everything from your microwave, right through to keyboards played by the Rolling Stones. So, we decided to set ourselves a little creative brief on which to base this fictitious clothing line. We imagined that Birmingham’s tourist board Visit Birmingham decided to start a tourism campaign in order to promote and support the city’s many museums and local history. Since the city has produced so many groundbreaking discoveries and inventions, this became the main base for the designs.

The Birmingham Logo
So, the first thing would be to come up with a logo. We’re talking about a design for a city council, a public entity, it would have to be very simple and easy to understand for everyone (as should all logos be, really). As for the name, just like with the name we created for the Bristol T-shirt brand, we used Inventions + T-shirts = Inventees.

We used the symbol of the light bulb to represent good ideas and mustard yellow to make the logo stand out and easy to use on a wide variety of backgrounds. Inventions are clever, and often very fun, so, we decided to use a play on words to make the T-shirts more appealing to the general public. We deliberately didn’t want to give them a sober tone coming from the council, but to be more fun and playful, making people more likely to want to buy them.

James Watt and his many Brum-based creations

We’ve all heard of James Watt – he’s integrated into our language through the international measuring system named after him, commonly seen on light bulbs (though, of course, he didn’t invent the lightbulb, that was Thomas Edison). He wasn’t actually English though, but in fact Scottish, but he did live in Birmingham, hence the common association. He invented the photocopier too. His main glory though was through his invention of the steam engine, of course, after being inspired by the kettle, which takes us to the next invention. 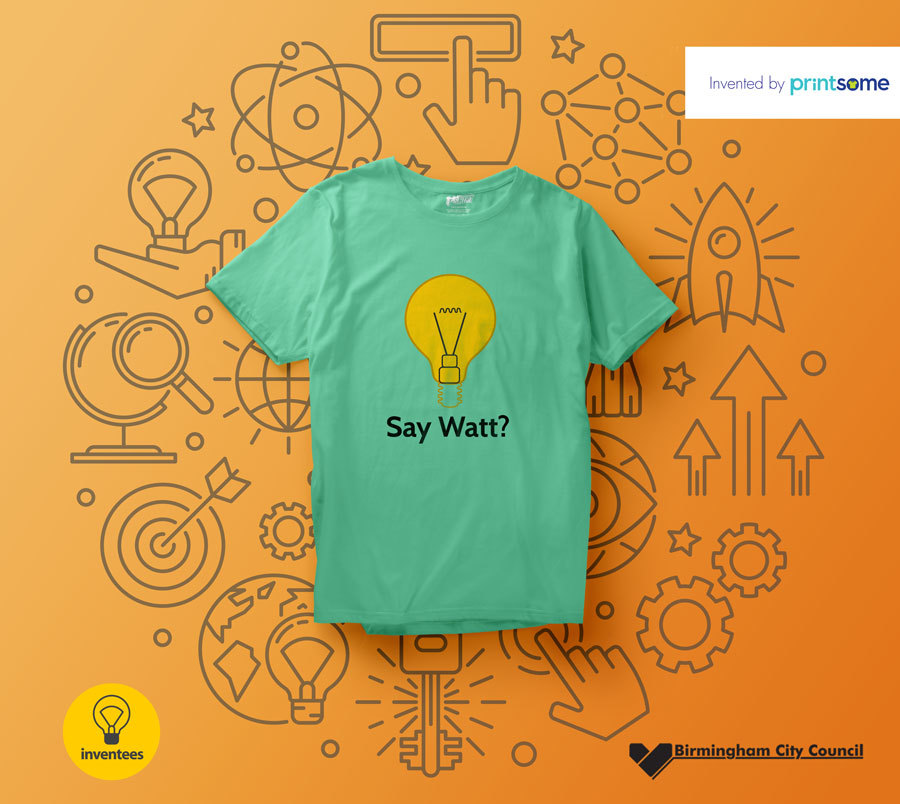 Time for a Large Cuppa

A similar story applies to the kettle, which was not originally invented in Birmingham, although the kettle as we know it today certainly was, in 1922 by Leslie Large. He designed the mechanism that would allow for the wire element of the kettle to be immersed in water so that we now don’t have to have a separate storage compartment when we go to make a brew. Cheers Leslie. 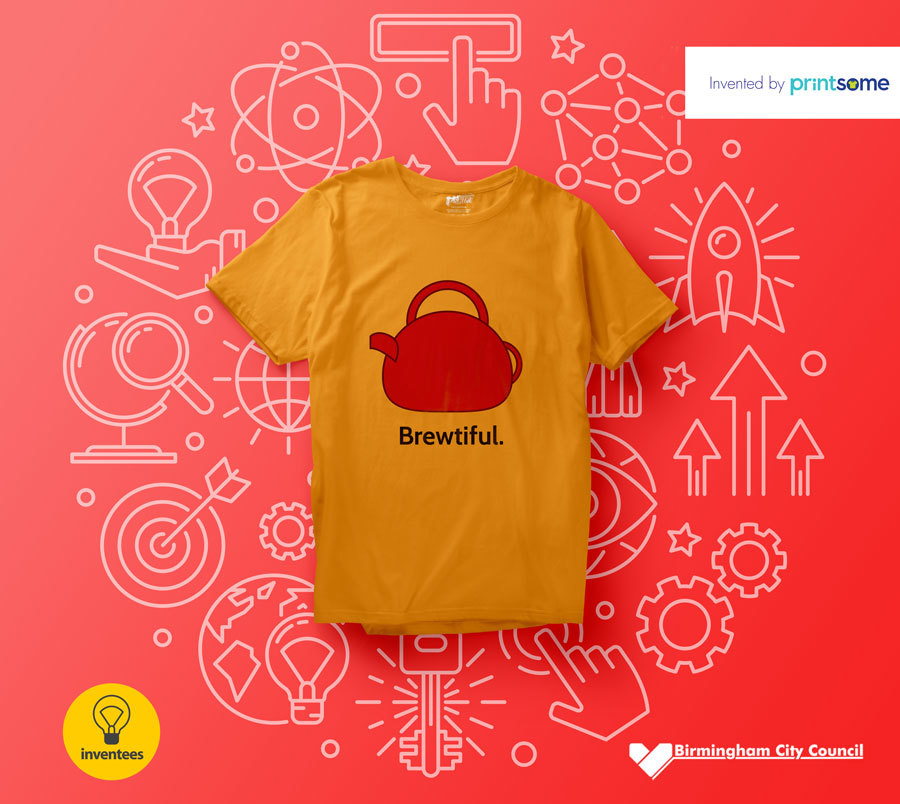 And what better to have with your cup of tea than a nice bar of Cadbury’s Dairy Milk chocolate? Okay, so it’s not in itself an invention, but Cadbury’s chocolate has certainly improved the lives of millions since its production in 1905. Thanks in part to its special recipe that added more milk than its rivals. Birmingham is also the home to the closest thing you can get in real life to Charlie and the Chocolate Factory: Cadbury World. 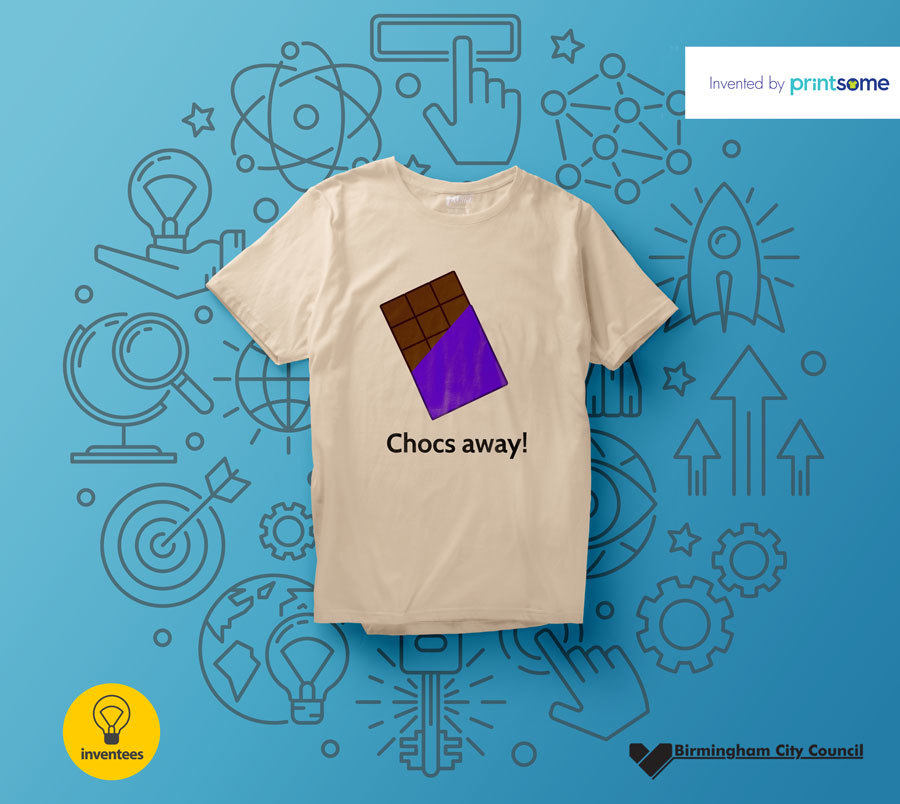 [content_band bg_color=”#E8F6D2″ border=”all”] [container]Need help kickstarting your label? We can help. Printsome’s T-shirts are produced locally ?? and from the best-quality garments. Our delivery services work all over the UK and can adapt to most deadlines. Learn more![/container] [/content_band]

The first ever Weather Maps

The need to predict the weather, of course, is really great in England. People seem to be forever talking about the sky, precisely because it really is a daily issue. In one day you could go from wearing your wellies and thermal underwear to sunglasses and floppy sun hat in the blink of an eye. Thanks to the invention of the weather map in 1861, Brits would be forever grateful to Sir Francis Galton, who also was instrumental in getting maps published in newspapers, by collecting and plotting lots of weather data onto a map in 1861. 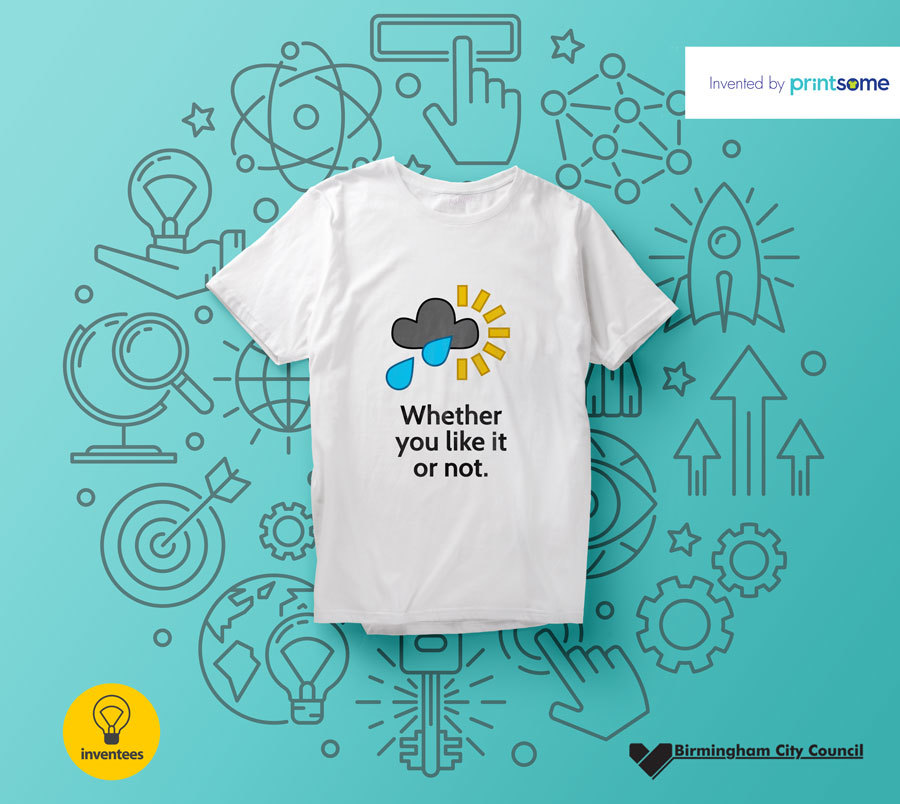 From outside to inside: the X-Ray

Like Galton, we can also be thankful to Birmingham folk for helping us to see things we hadn’t before through their implementation of the first X-rays in medical practice. X-rays had already been invented, but it wasn’t until 1895, that John Hall-Edwards saw their potential in the world of medicine. It’s thanks to him we have them in hospitals to this day. 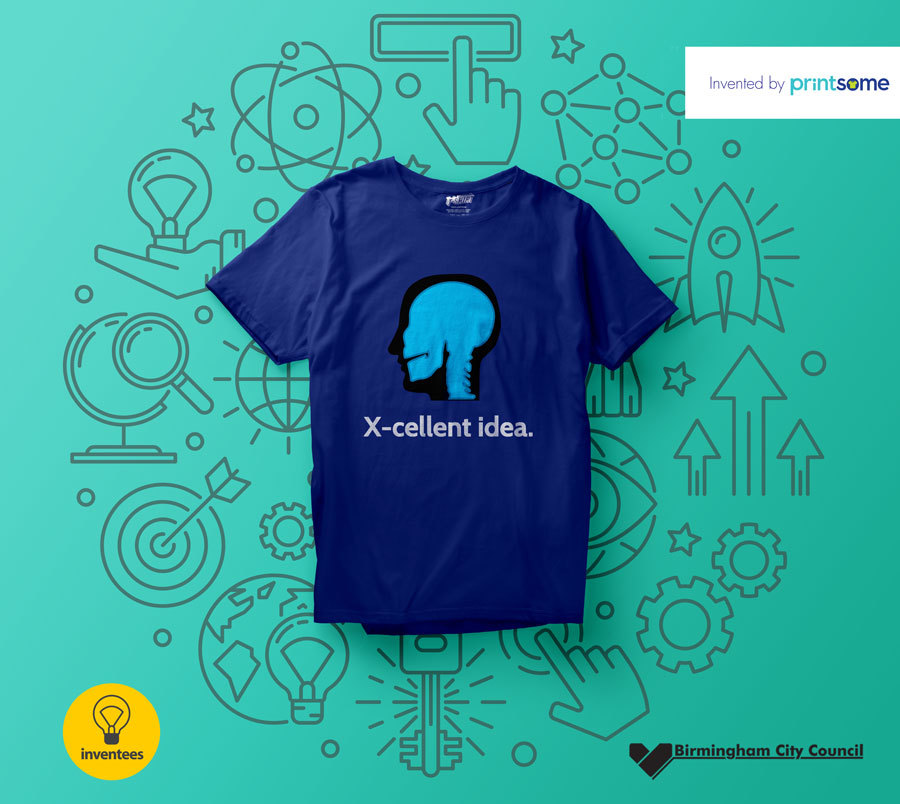 Just another little invention to add on here this time by John Richard Dedicoat (James Watt’s apprentice), who invented the bicycle bell. In fact, Birmingham is pretty famous for lots of noisy inventions, including the car horn, the vacuum cleaner, portable music player, auto-changing record player and even the microphone. 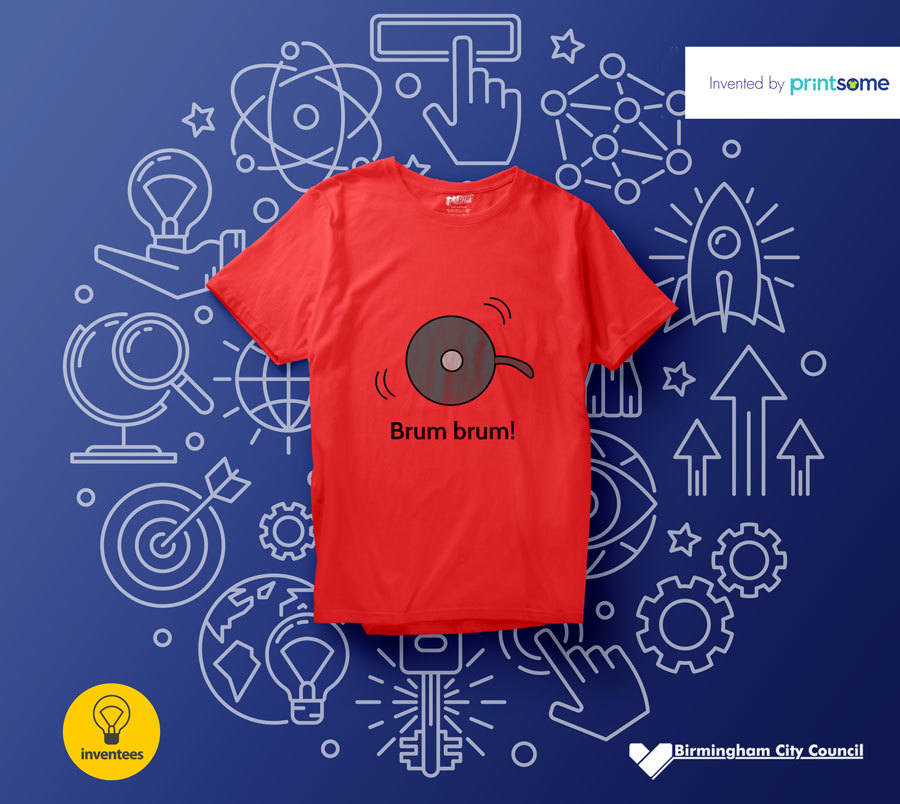 And last but not least, they keep us rolling with the production of the first tyre in the Dunlop factory, 1888 in the land of Brum. Again, invented by a Scot, leaves Birmingham residents feeling proud all the same. 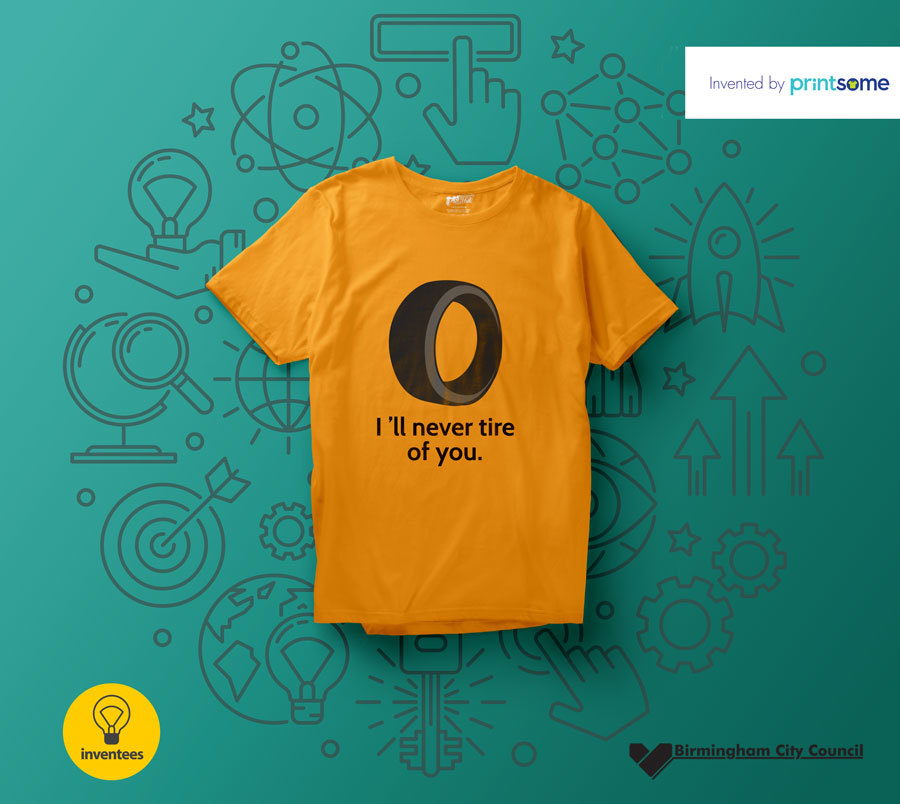 From the moment you get in touch, one of our printing experts in either Birmingham will answer all of your questions and find efficient solutions to your needs. It is our mission to help you reach your goals.