Recently, it was announced that for 2017 London’s Super Comic Convention was moving to London’s Business Design Centre and that instead of two days it will now be celebrated over three days.  It only goes to show you that these types of events are getting stronger and bigger over time.

With over 135,000 attendees to San Diego’s Comic-Con this year, comic book conventions are no longer just for selling T-shirts and collectable figures. Many companies are highlighting these dates in their calendars — for brands to have a convention centre filled with an engaged audience that actually wants to be there, is priceless.

But in order to not get lost among the Batman and Sailor Moon cosplayers, some major marketing campaigns need to be orchestrated; resulting in fierce competition between major names and some incredible displays of creativity.

The last time Americans tried to translate Godzilla it left a sour taste in most people’s mouths, so in order to promote a new remake of the movie the studio knew they had to pull out something amazing. At the 2013 Comic-Con, they transformed an entire building and made it look like you’d stepped into the streets of Tokyo. Of course, there were plenty of spots to buy Godzilla memorabilia (printed T-shirts, toys, you name it) and even a Godzilla-themed sushi bar.

They also gave attendees glimpses of what the new version of Godzilla would look like. This was a big deal, as they’d kept it tightly under wraps until then. So not only did they bring the world of the film to the fans, they also gave them something exclusive to entice them to visit it.

80’s movie TRON got a makeover by Disney in 2010, and what better place to promote a cult classic than at Comic-Con? The sequel was titled TRON: Legacy and involved more hijinks in virtual reality, this time with a new cast and a story centred around Flynn’s son Sam.  Fans had to complete a series of steps in order to receive a package that would grant them access to Flynn’s arcade.

Inside the arcade, fans could enjoy a drink at a futuristic bar, visit an exhibition of some of the film’s costumes and even see a screening from parts of the movie. It was a huge hit at the conference. Now, if only the movie had been as successful…

An equally good marketing campaign for a film was Fox’s Dawn of the Planet of the Apes stuff for Comic-Con 2013. They got “doctors” to walk around “vaccinating” people against Simian Flu and giving away free hand sanitiser to prevent the spread of it.

They also did a good job of having key people from the movies, like actors and the director, on hand to chat to the press to give away a few other previously-secret details about what would be happening in the sequel.

Fortunately for Fox, this was a much more successful flick at the box office than TRON: Legacy was for Disney. It was so successful that they’ve decided to go ahead with a third movie in the rebooted series.

Make transportation part of the fun

In 2013, Kia revealed a line of seven cars that represented each of the members of the Justice League. While some of the art of the vehicles leaves a lot to be desired (I personally find the Flash one particularly horrible), the strategy was overall well-received and got the Justice League Sorrento a lot of attention.

The car line was actually an extension of a project Kia already had going with DC Comics: the We Can Be Heroes campaign. The campaign was created to fight hunger in Africa and involved the creation of superhero cars for auto shows. The final collection in the collaboration was the Justice League Sorrento line.

Think outside the convention centre 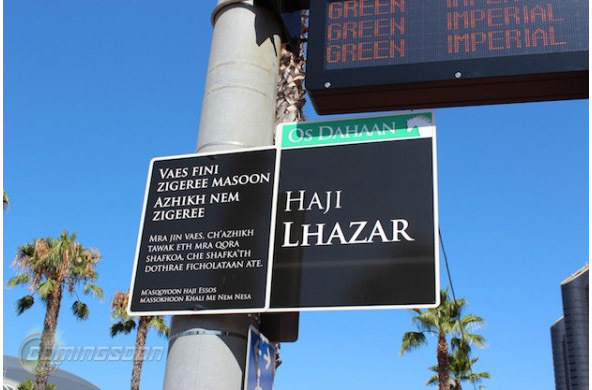 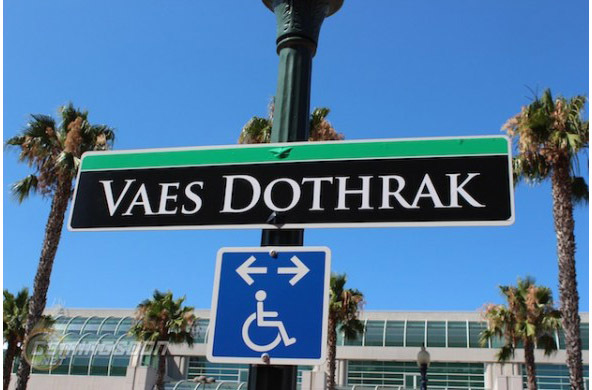 Game of Thrones is one of the most popular TV shows right now, so even though HBO probably didn’t have to do a whole lot to sell Comic-Con attendees on the idea of watching the show, it was a golden chance for them to do something cool their fans would remember. They came up with a simple but very appealing campaign for the 2013 edition of Comic-Con — translating written information into Dothraki (one of the made-up languages spoken on the show). Some fans got quite a surprise when they saw trolley signs and instructions written in the language spoken by the Khaleesi to her subjects.

Use nostalgia to your advantage

Has nostalgia ever been hotter? Right now, everything old seems new again. Part of the nostalgia resurgence was Nickelodeon’s new TV movie based on Legends of the Hidden Temple, that game show from the 90’s. They spilled the big news to fans at Comic Con in 2015, along with a huge installation inspired by the series that included a spot where fans could buy their own tees, plus a photo op where they could get snapped with their freshly-purchased garments. Smart move, Nickelodeon!

Want to take a page out of Nickelodeon’s book and have T-shirts available for people to buy at the next conference your brand is going to? Get in touch and we’ll get some great ones together for you!

Get into the spirit of things like “The Event” 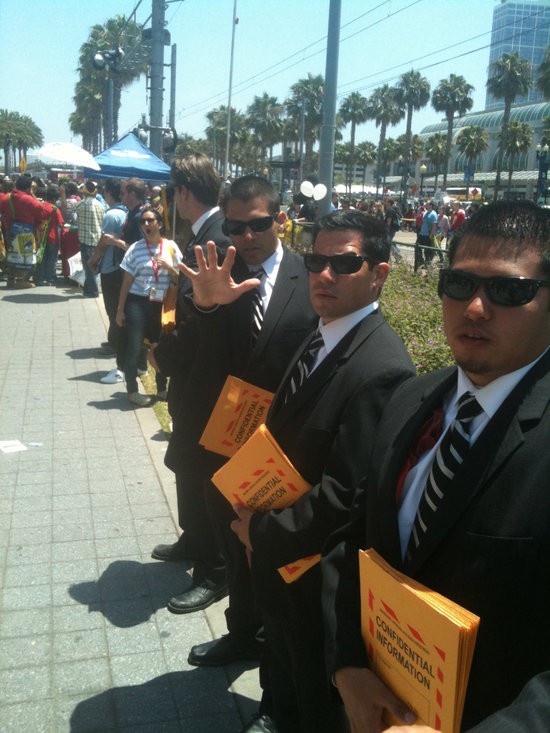 NBC came up with a clever way to promote their new show, The Event. Knowing that people who attend this event are big superhero fans, they came up with a marketing stunt that looked like it had come out of the silver screen.

They got five guys to dress up like members of the Secret Service holding big yellow envelopes with “Confidential Information” printed on them in large letters. And rather than passing out these envelopes, attendees had to go up to the them and ask for the envelopes — and not just once, either. The “agents” eventually could be persuaded into handing one of the envelopes over, and inside fans got an official-looking document discussing an escaped inmate. But lots of the parts were blacked out. If you Googled the words you could find, they’d take you to the show’s website. Fun stuff, no?

Let followers be a part of your brand

Back in 2010, Dexter was one of the hottest things on television, especially for the hardcore fans of the show who showed up at Comic Con that year. The Dexter team had people on the streets handing out tattoos that looked like bleeding cuts that fans could put on. They also staged one of Dexter’s “kill rooms” that fans who completed a scavenger hunt around the convention centre could get access to.

Of course, fans were eager to share pictures of their tattoos — and any they could take inside the kill room if they were lucky!

Their team also made sure that Dexter’s branding was all over the place, as all the lanyards attendees got featured the show’s name. If you can get your brand on the lanyard or name tags, you’re in a great spot for publicity!

Stay on top of technology trends

The team behind Conan gave fans the chance to go inside the ginger-haired television host’s mind at the 2015 edition of Comic Con with a virtual reality headset that resembled his head. It was attention-grabbing and a smart way to encourage attendees to actively participate in something about the show. Innovation is always a good way to stand out! Try to keep on top of what the latest tech trends are and see if you can find a way to use them.

Your budget might not stretch to a collection of personalised virtual reality headsets, but creativity is really the key ingredient here.

Tie your marketing to a good cause 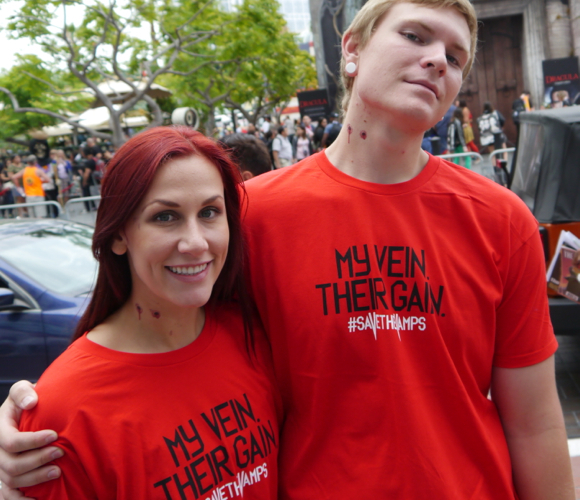 True Blood + blood drive = match made in heaven, right? The genius idea to pair the vampire show with a blood donation drive (#savethevamps) was an excellent way to get attention for their show and also to help out a good cause. On top of that, fans who donated got a thank-you T-shirt that said “I was drained responsibly.” Not only was it a coveted item for conference attendees to get, but it was also another tool to spread the word about the blood drive even further. Very clever, True Blood!

Of course, even if you’re nowhere near sunny San Diego, you can take these ideas and work with them for the next conference or event that you attend. Or, you can look for a similarly-themed event that’s near you. London’s Super Comic Convention is another big one, and there are sure to be at least a handful of things that cater to a similar crowd no matter where you are.

Printsome is an online T-shirt printing agency in the UK that supplies super cool printed T-shirts to geeks, nerds and Wookiees from London to Glasgow.