20 of the best (and worst) uniforms from TV and movies

When creating fictional worlds, writers face the challenge of imagining everything about them.

It’s easy to see where that creativity goes in fantasy and sci-fi, but when fiction is inspired by day-to-day life, there are also moments when creators cannot use real references and must come up with something. This can include anything from religions to political systems and good ol’ regular jobs — and their work uniforms!

This is where we come in. We’ve taken a look at movies, cartoons and TV shows to compile a list of some of the coolest (and most awful) fictional work uniforms out there. Prepare yourself for lots of fast food joints, bright colours and ridiculous hats — lots of ridiculous hats.

So here they are, in no particular order:

In this episode from the show’s third season Daria is forced to get a job, and to add insult to injury, she has to do it while wearing that outfit. If you don’t think that’s bad enough, she describes it as ‘…worse than school.’ 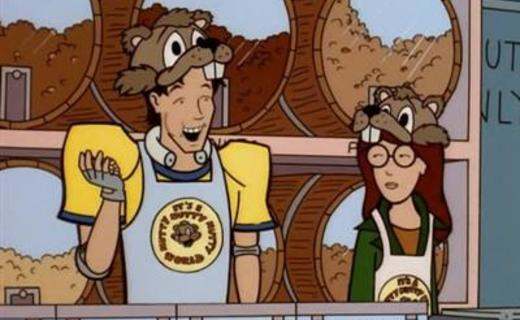 Note: Spoilers ahead! If you haven’t seen Cloud Atlas and don’t want to find out what happens, skip this paragraph.

At a first glance, these uniforms are probably the worst possible choice for working at a fast-food restaurant. I mean, could you imagine serving hot dogs in a tight, short, latex(?) dress? But then you realise that these are clones who are being exploited and then it all makes (creepy) sense.

“Welcome to Good Burger, home of the Good Burger! Can I take your order?” It is a classic line that even though I had forgotten it, the moment I read it, it took me back a few years to the days when Nickelodeon was relevant in my life. In terms of design, the uniforms of Kenan and Kel look like something that I can only describe as vintage Americana customer service.

BTW, We all know where Kenan ended up, he’s working for Saturday Night Live now, but whatever happened to Kel? 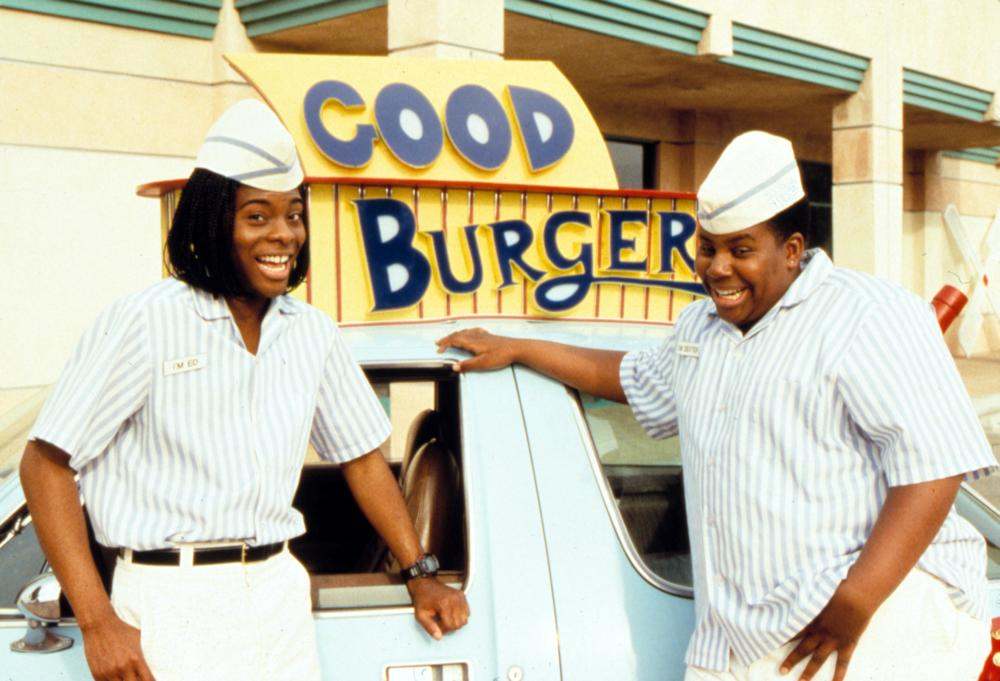 Yes, it is a bit of a cop-out, we’ll admit it, but it is technically their job. They even hire an assistant and have to rent a garage to store all of their ghost-hunting stuff. At this point, we don’t know if the uniforms are really cool or if they’re just cool by association, but you have to admit that an outfit that looks well on men, women and kids alike is at the very least versatile. 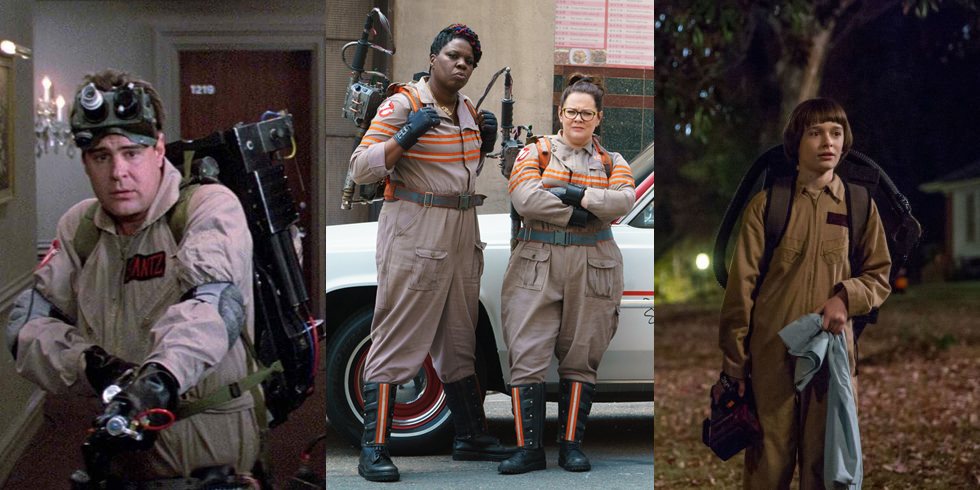 Office Space is one of those movies that didn’t do that well at the box office when it was originally released but became a cult classic over time. As a film that criticises American work culture, a person that works at a fast-food restaurant couldn’t be missing. In this case, Joanna (the character played by Jennifer Aniston) gets stuck in the T.G.I. Friday’s type of uniform that was made famous in the 90’s for its bold stripes, black trousers and pins — many pins. 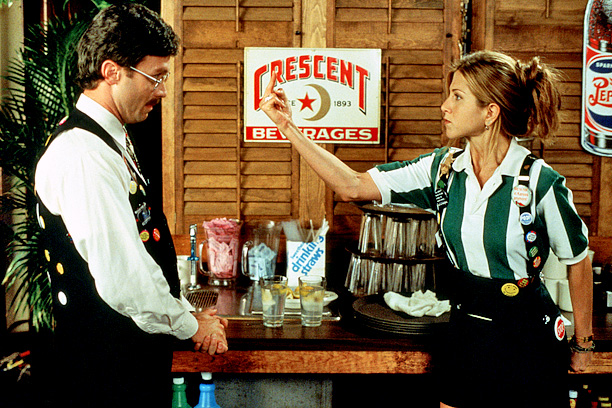 Laney’s workplace (‘She’s All That’)

Remember when Freddie Prinze Jr. was the hottest guy in Hollywood? Yeah, me too *swoon*. I don’t think this joint had a name in the movie, if it did and I just couldn’t find it, please let me know. All I have to say is that I thought Daria’s squirrel hat was bad. 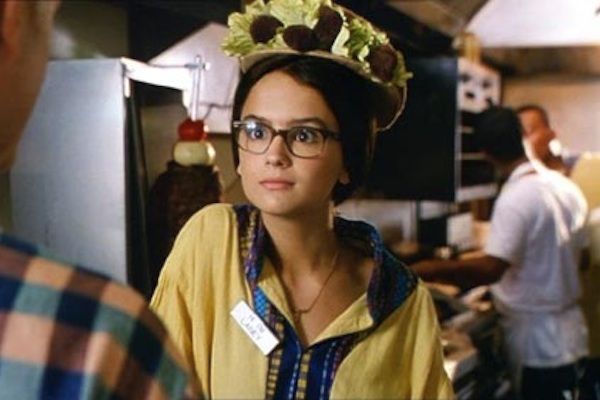 Fake breasts, check! Blonde wig, check! Roller skates, check! Monica is mostly remembered for being a chef, but fans of Friends know that she worked at the Moondance diner for a couple of seasons and she had to do it in Marilyn Monroe drag. Wrong? Maybe, but we still love it.

Fun fact: The Moondance Diner was a real place. 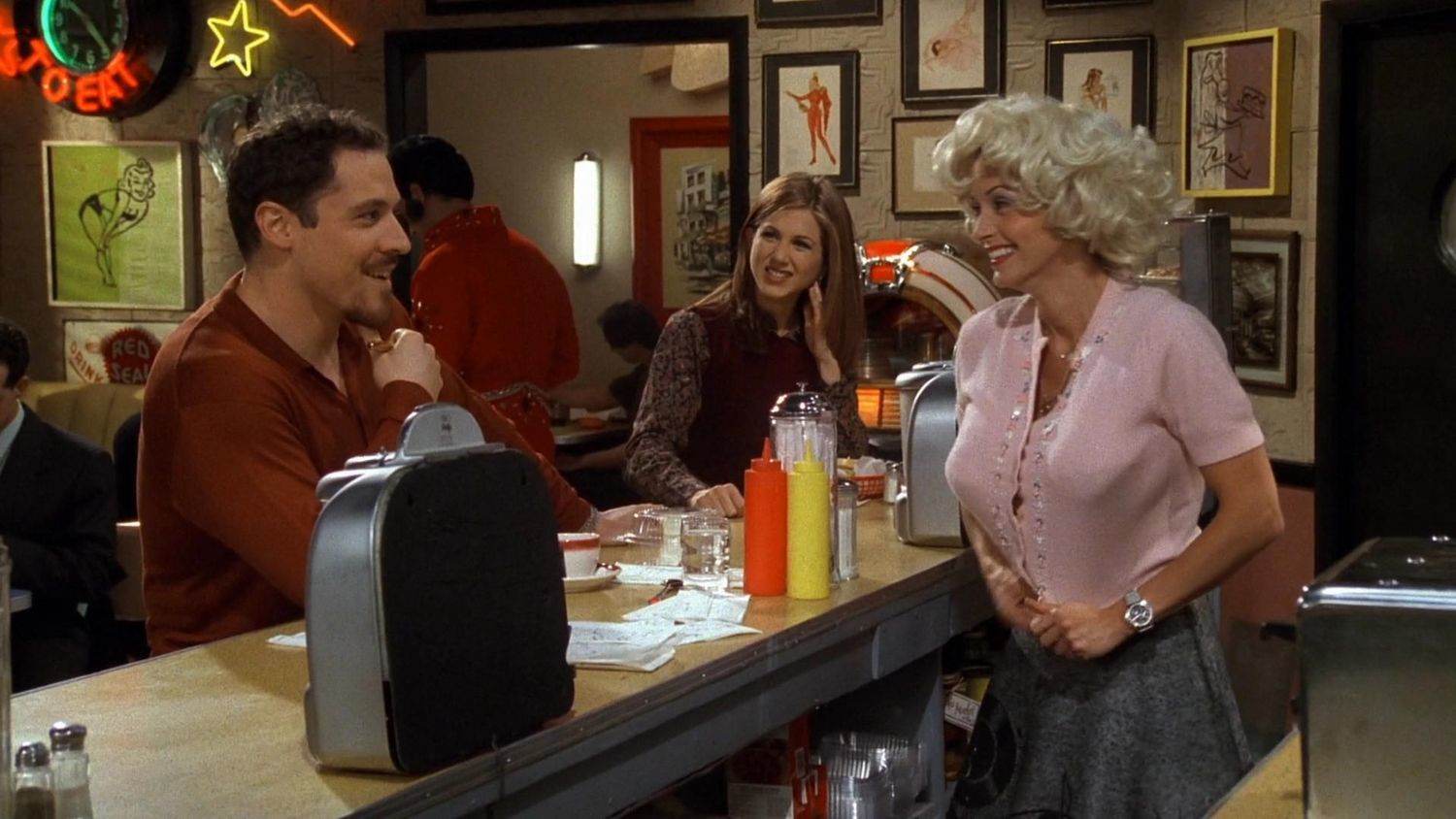 Due to the nature of this teen black comedy from the 80’s, it only makes sense that the uniform of the character stuck at the fast food joint is as embarrassing as possible. Not sure if that fake nose is the most practical thing to wear when cooking, though. 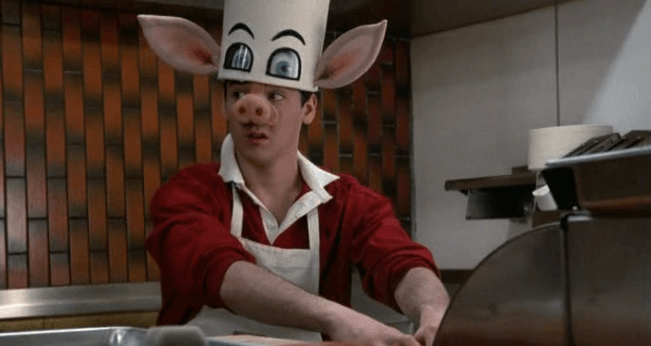 In this episode, Buffy is demoted from vampire slayer to burger flipper. She still gets to kick man-eating demon butt, though and she does it while wearing that ridiculous snapback. 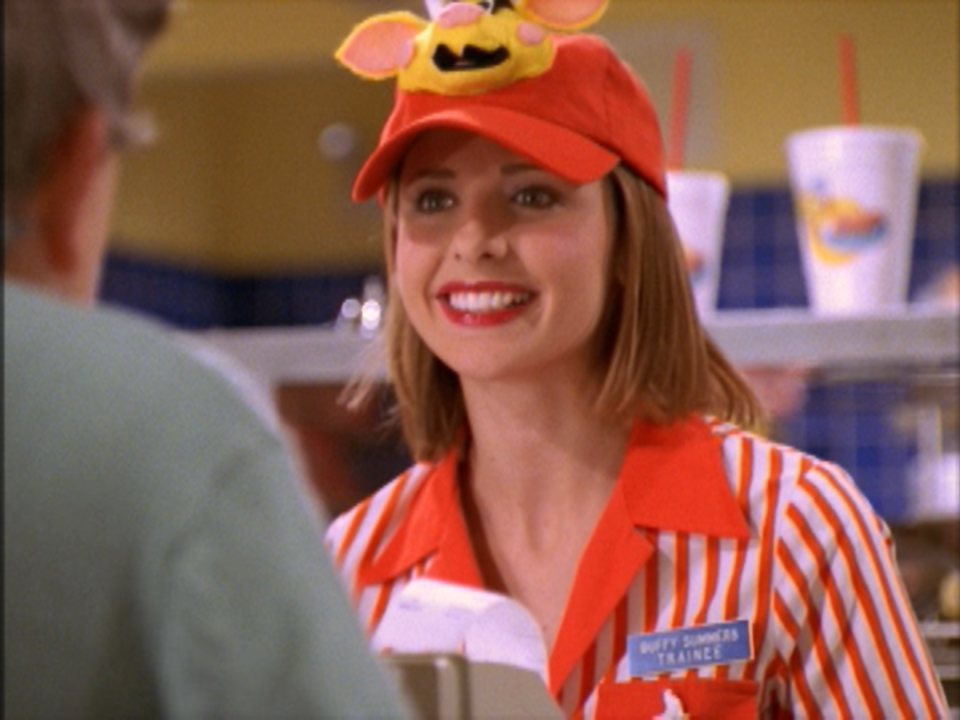 Costume design: Milena Canonero (she won an Oscar for her work on this movie)

The Grand Budapest Hotel is often referred to as one of the most beautiful movies ever created and part of that comes from the masterful costume designs. In this case, we’ve decided to highlight the bellboy suits. 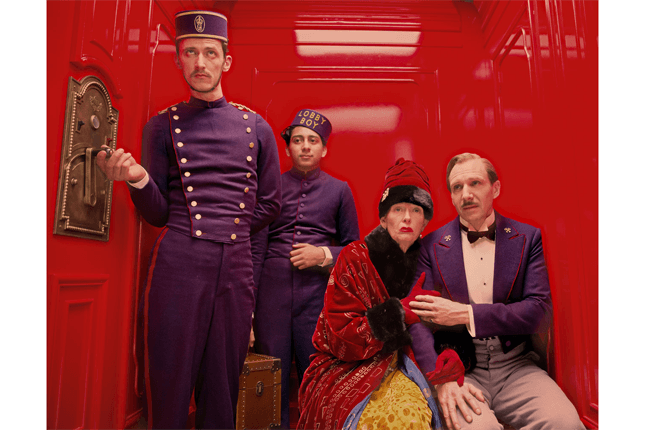 In this Steve Martin movie, the not-quite-the-brightest main character Navin (played by Martin) moves to St. Louis to start a new life. Eventually, he finds a job at a gas station and has to wear something very similar to what Kenan Thompson and Kel Mitchell wear in Good Burger. 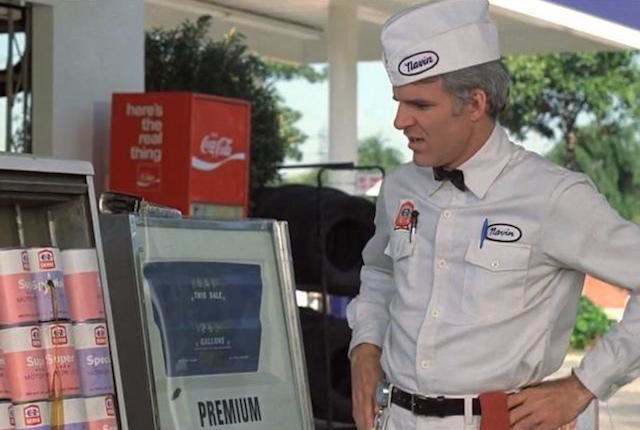 Purple and yellow is a tough combination to pull off, but if there is someone who can do it is… no, wait. It doesn’t look good on Rosario Dawson either. Forget it.

This uniform gets points for creativity (there aren’t any creativity points, but bear with me…). Personally, I don’t fancy the idea of being served by a pirate, but I do welcome the out-of-the-box ensemble. 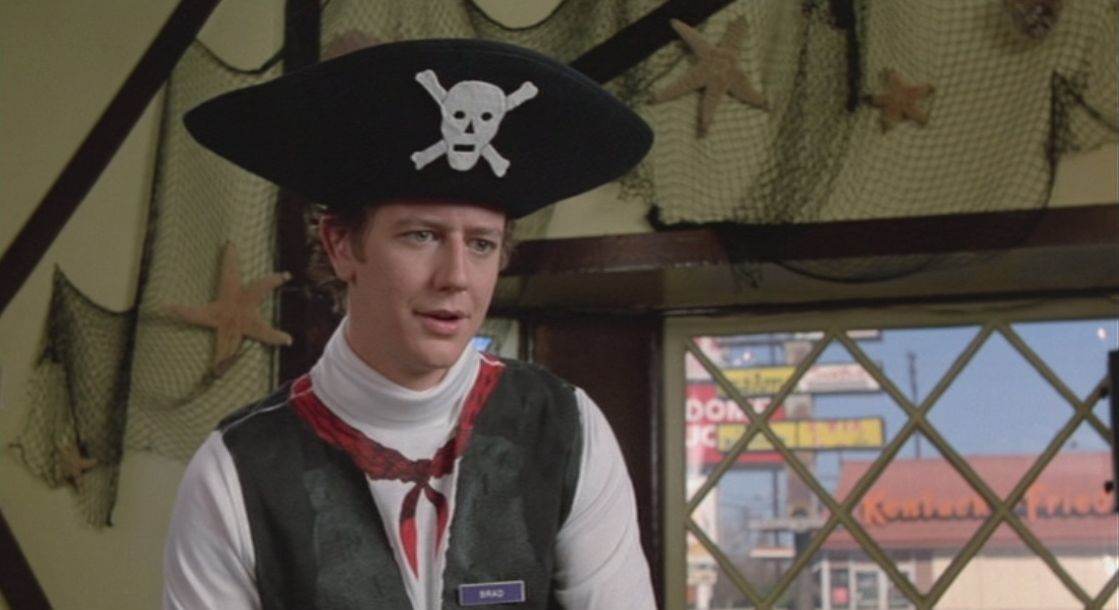 It’s a classic black suit, there’s not much else to it, but they sure look cool. 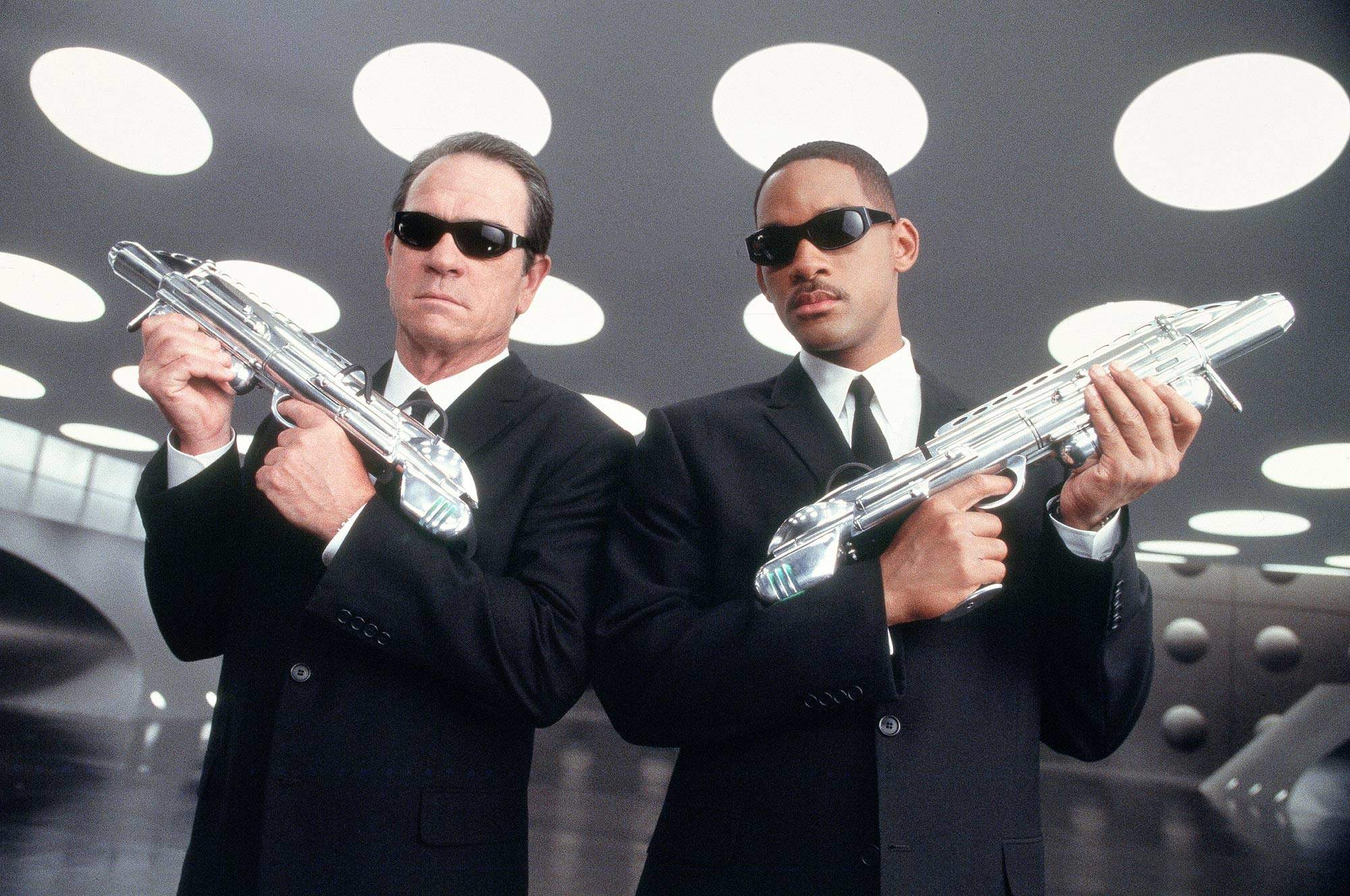 Nothing says elegance like a beer print on leggings. These are obviously meant to be a parody of Hooters, but blimey. Take a look at this Tumblr post that talks about the design behind it. 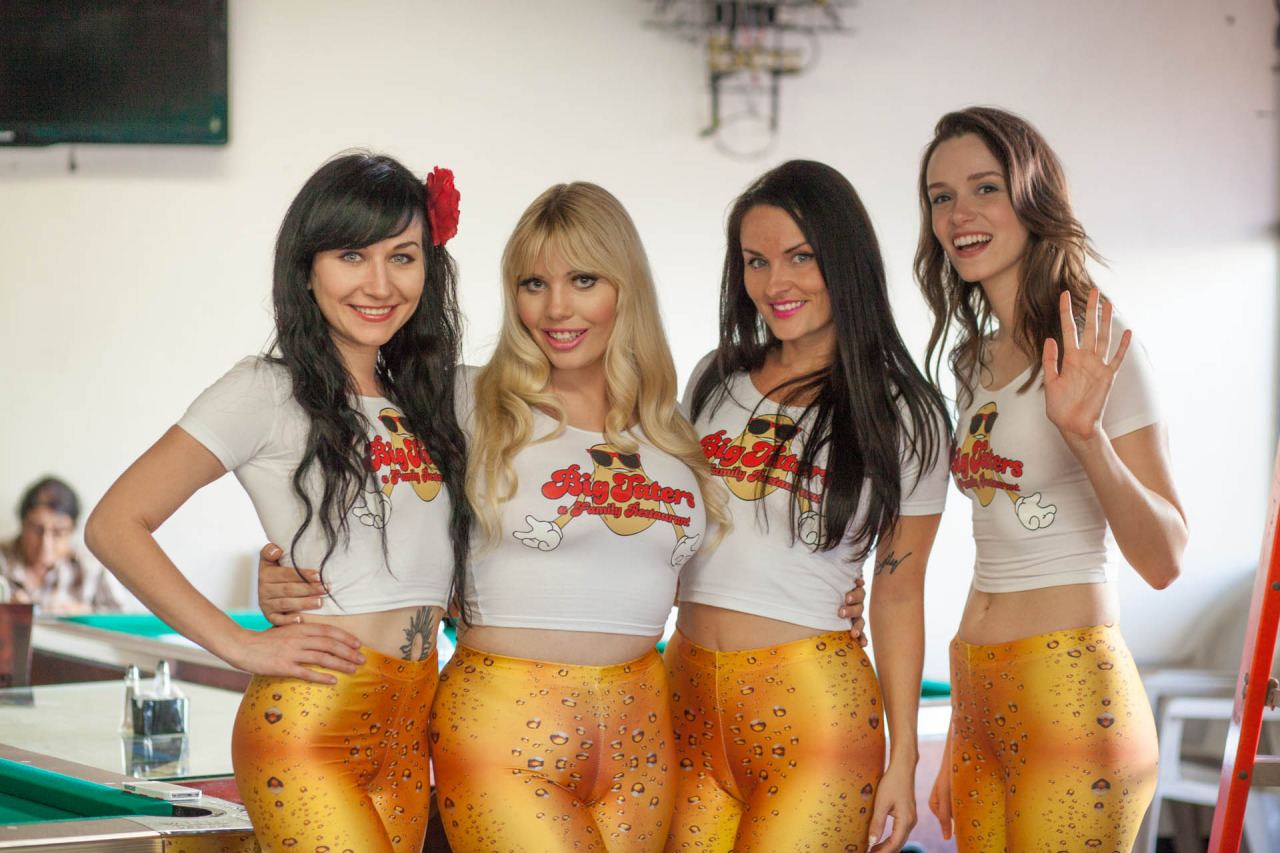 While also sexualised, these uniforms at least allow the girls to show a bit of their personalities. Kat’s has got a lower cleavage, while Beth’s is accessorised with probably the biggest pearl necklace I’ve ever seen in my life. 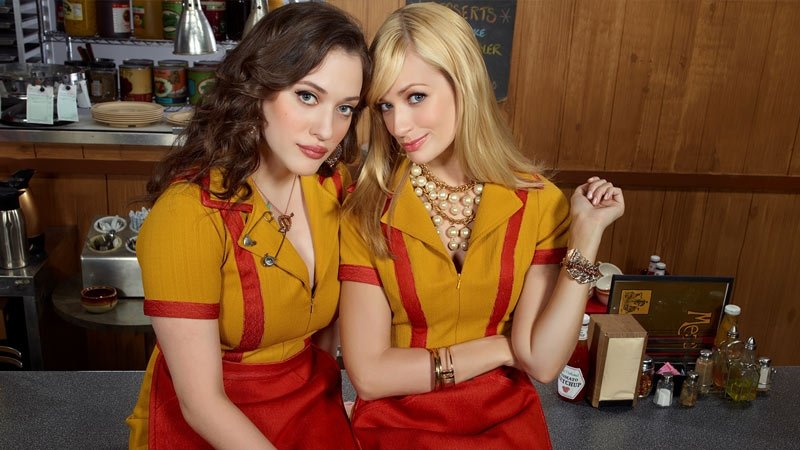 Diner (‘The Princess and The Frog’)

Tiana’s uniforms has a striking resemblance to the uniform worn by the girls above (this one is much more modest — it is a kids movie, after all) with almost the same shade of yellow and pattern, but with a longer skirt. In typical Disney fashion, the princess gets her wish of owning a restaurant in the end and doesn’t have to wear those rags anymore. Good riddance. 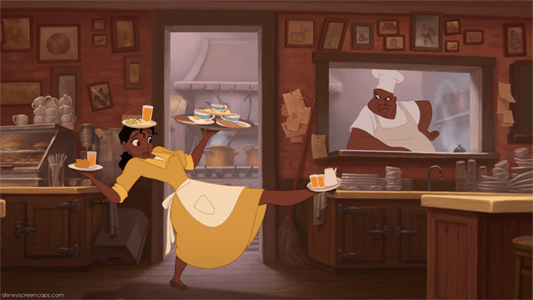 Throughout the years, we’ve seen nurse Joy wear different versions of her uniform, but the basics are always the same: Pink dress, white apron and a cute little headpiece that matches the rest of the ensemble. Her angelical appearance was always welcome whenever we went to heal our Pokémon. 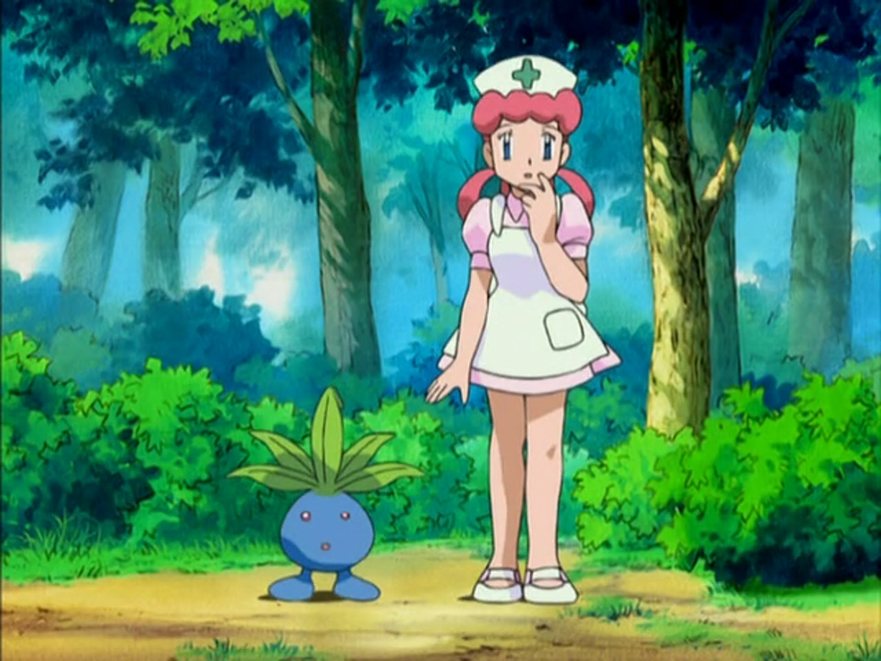 And last, but not least, we leave you with one of the most famous scenes from the 50’s TV show I Love Lucy. If you’re wondering why this scene is so famous, I dare you to watch it and not chuckle. As for the uniform, they present a classic 50’s collar with a silhouette of the decade. It would look very chick in a contemporary hipster office. 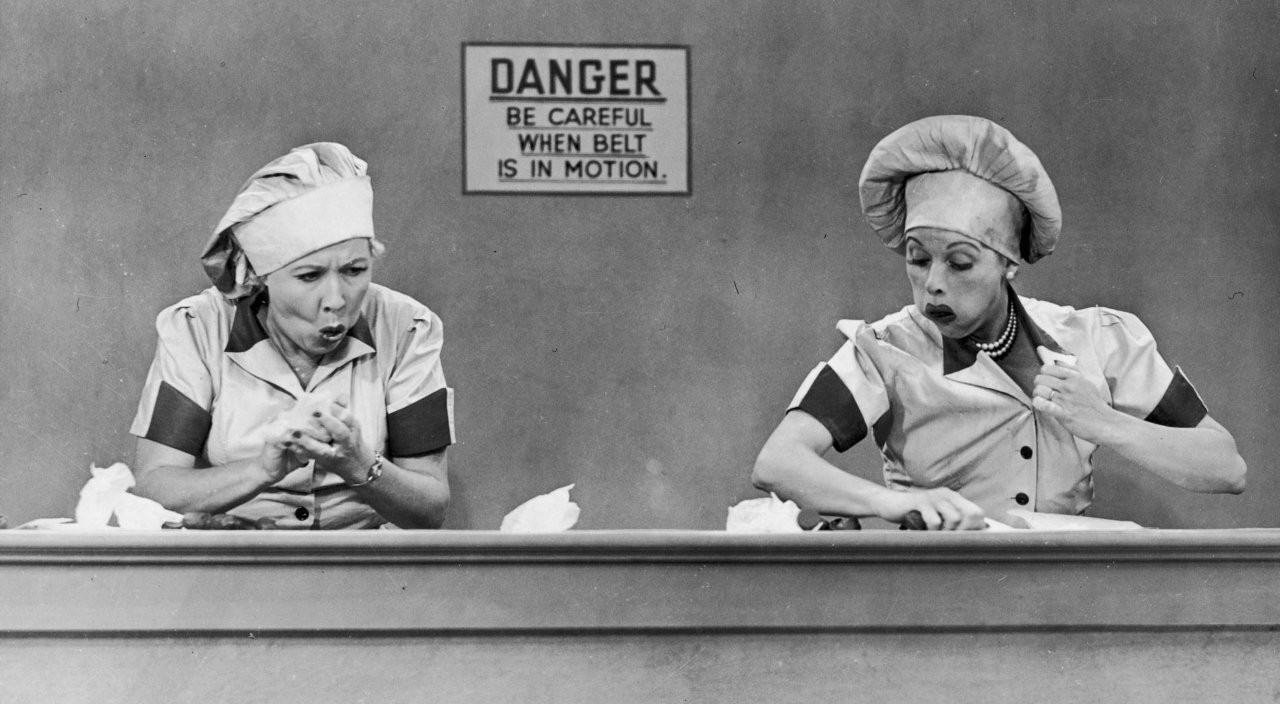 As an added bonus, here’s Sigourney Weaver in Working Girl. In case you don’t know, this movie was made during the shoulder pads and big hair crisis of the 80’s which makes every outfit in this movie EVERYTHING. Sure, technically it’s not an uniform, but the title of the movie has got ‘working’ on it and that is enough for me. 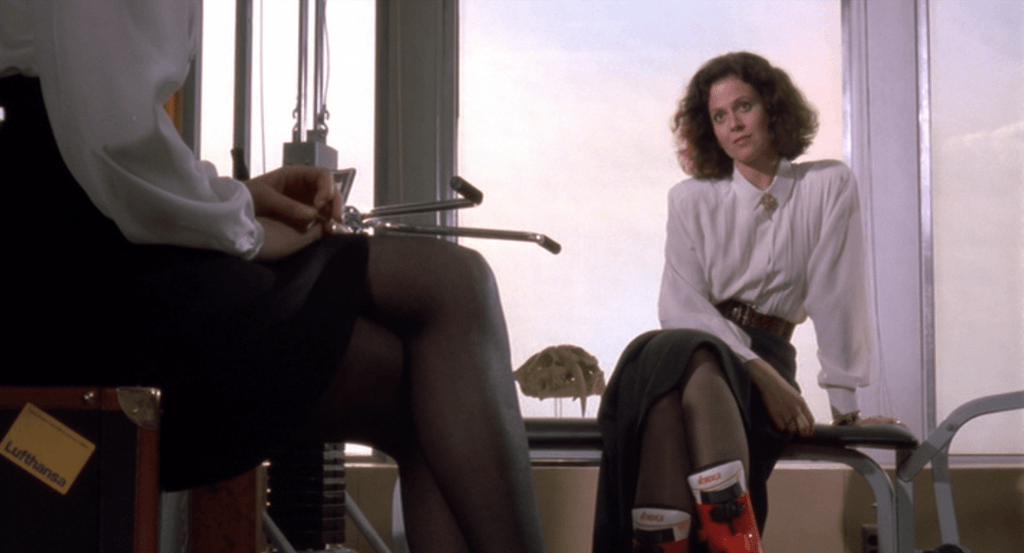