Here at the Printsome office, one of our favourite topics is design — and not just for T-shirt printing.

These days, it isn’t optional anymore, even for basic stuff like a website you’ll need to stand out and look sharp for the right customers at any moment in the game. Luckily, inspiration can be found even the strangest of places and even if you can’t find it — just take it. Let’s remember Pablo Picasso’s famous quote:

So using these two ideas as a jumping-off point, we’re going to show you that great designers steal from lots of sources of inspiration. Just about anything can be inspiring — and we really do mean anything!

Beyoncé lends her curves to a… skyscraper?

That’s right. The diva’s gorgeous curves and feminine strength are famously inspirational to legions of fans, men and women alike. That’s probably what the architects of Elenberg Fraser in Melbourne had in mind when they used her video “Ghost” as design inspiration for their skyscraper. Talk about a weird place to find creative design inspiration — and for a building of all things!

Created by the famed Nike designer Tinker Hatfield, the Nike Air sneaker is loved by athletes, casual runners and even dedicated couch potatoes the world over. Still, did you know that the Nike Air story is pretty inspirational on its own?

Just looking at it, you wouldn’t expect the shoe to have anything to do with architecture, and much less to do with France.
The building in the photo is the Centre Georges Pompidou, named after the architect who built it. It’s truly a piece of art when it comes to architecture. The designer gutted the thing to display everything that would normally be hidden behind walls, including electrical lines, plumbing pipes, ventilation shafts and even the escalator. Now you can see why Tinker chose this building as his design inspiration for the Nike Air. Airy.

Oh yeah, we’re not going to limit an article about weird and strange places for finding creative design inspiration to just buildings and products. What about processes? What about UIs (User Interfaces)? These have to be designed, too!

Enter Facebook. You know their news feed. I know it. It’s omnipresent. Global. Daily. It feeds us all kinds of information and we just can’t stop scrolling.

So, what’s the inspiration behind the design of this most important Facebook feature? You won’t believe it.

Sort of. This article cites the ex-global head of brand design for Facebook, who said that the company is more like a social psychology company than a tech one.

The real inspiration isn’t just gossip, though. It’s the way people once communicated hundreds of years ago. The news feed was inspired by communities “where things are very small, and gossip spreads really fast, and everyone knew everyone else, and people left the doors open at night,” to quote the ex-brand design manager, Paul Adams.

Ferrari – The logo was first on a plane

“The horse was painted on the fuselage of the fighter plane of Francesco Baracca — a heroic airman of the First World War. In ’23, I met Count Enrico Baracca, the hero’s father, and then his mother, countess Paulina, who said to me one day, ‘Ferrari, put my son’s prancing horse on your cars. It will bring you good luck.’ The horse was, and still is, black, and I added the canary yellow background which is the colour of Modena.”

Is that a weird place for creative inspiration? Maybe not. But it’s certainly unique. And one thing is pretty strange: the fact that he found his logo, a horse, on a plane, but for a car. It truly was the speedy trifecta.

There are plenty of articles that talk about why Philippe Starck’s Juicy Salif is a masterpiece of industrial design. But what we can’t seem to figure out is where on earth he came up with the name “Juicy Salif” in the first place.

It might seem like something out of War of the Worlds, but in reality, the squid-like lemon squeezer was inspired by a meal of squid and lemon. Starck jotted down his sudden idea on a napkin and mailed it off to Mr. Alessi (housewares and utensils company) for approval. 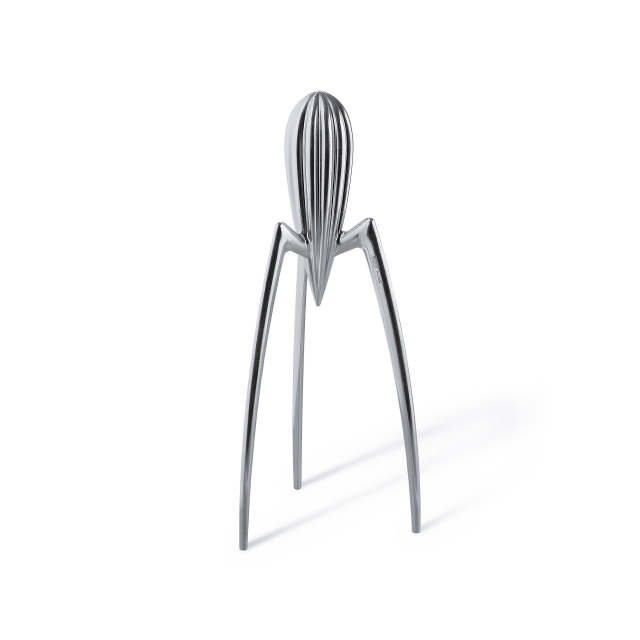 No, we aren’t talking about what nuns do in their daily lives — we really do mean the habits they wear. Though Coco Chanel is practically synonymous with glamour, a nun’s getup isn’t. But despite the chic associations with her name today, did you know that she actually grew up in an orphanage run by nuns?

That’s why you’ll often see things that reference nuns and religion in her clothing, from her love of black and white to rosary beads, chains and crosses. The nuns were also the ones who taught her how to sew. Who’d have guessed?

In a galaxy far, far away…you’ll see a lot of things that were inspired by earthly objects that look like they were beamed in by an alien species. One of those objects is a building called La Pedrera located in Barcelona, Spain.
Star Wars creator George Lucas visited the building before he started work on the series. He got the idea for the costumes for the Storm Troopers and Darth Vader from the twisted chimneys on the rooftop of the building.

Let’s jump from chimneys to chairs. We’re also going to move from film back to fashion. Designer Lela Rose’s 2014 Fashion Week collection was inspired by this funky patchwork chair. The chair is a bit out there, but the way it’s translated into the skirt is very cool.

The chair is actually an icon on its own, though. It’s by Arne Jacobson, a Danish architect and designer who created the Swan and Egg chairs. (You can tell they’re important pieces of furniture because they get capitalised).

Though they’re called “beauty patches”, these strips of fabric are actually pretty ugly in this photo. You wouldn’t stick the whole thing on, though; you’d pick out a tiny moon or star and place it over a scar or pimple. Not too dissimilar from some of the styles we’ve seen at music festivals lately!

All of that came back with Swarovski’s spring-summer 2016 collection. They wanted to make the patches out of new material that would look like something symbolic without any true meaning (that’s fashion for you). Then the patches were appliquéd onto the clothing.

This totally bizarre house (Casa do Penedo) is built out of two massive stones that are joined together with a section of concrete with a few windows added to make clear it’s a house. It also has a front door, a rooftop, bulletproof windows and a swimming pool. Oh yes, and it bears a striking resemblance to the house that the Flintstones family lived in.

There’s another prehistoric touch to the house, too. There’s no electricity!