The world can change in a decade. From a dramatic increase in the viewing of cat videos to the word viral having nothing to do with illness, Youtubeland is one hell of an adventure park these days. What started out as a simple video sharing platform in 2005 started up by some ex Paypal employees, is now like a social planet all of its own, that generated 9 billion dollars in revenue in 2015.

And of course, when things get popular, there’s money to be made. The top blogger in 2015 made a whopping 12 million dollars before tax by commentating whilst playing video games. It’s hard to believe that 40 million people would subscribe to that, right? Wrong.

That’s part of the magic of this new Youtube generation – any and everyone can have a go, and vlogging reaches niche markets that you would never have imagined existed, such as psychopathic children’s videos like ‘Don’t Hug Me I’m Scared’ to VHS mash-ups and eccentric artists, like Jillian Mayer and her ‘I am your Grandma’ performance. 62% of all men aged 18-24 years old and 55% of women are on Youtube, making it young adult territory.

Just like a lot of other types of business, merchandising has equally become important territory for video lovers and producers alike. Since we wrote The Printsome Guide on How to Create Your Own YouTube Merchandise, we figured it would only be fair if we had a go ourselves. Except with one additional challenge – our merchandising would have to sit comfortably in the online stores of famous YouTubers who already have a wealth of goodies on sale…

Let’s see how we did.

Emma Blackery is the only one of the YouTubers we selected who doesn’t currently seem to have an official logo, though she has her merchandise base pretty well covered, with everything from wristbands to a magazine edition in her online shop. Since branding is everything these days, we spent quite some time nosing around her various social media profiles to conjure up some kind of general branding for her. And what did we come up with? Hair, skating and big bold bright colours. From this, we came up with a merchandising line with a personal touch. 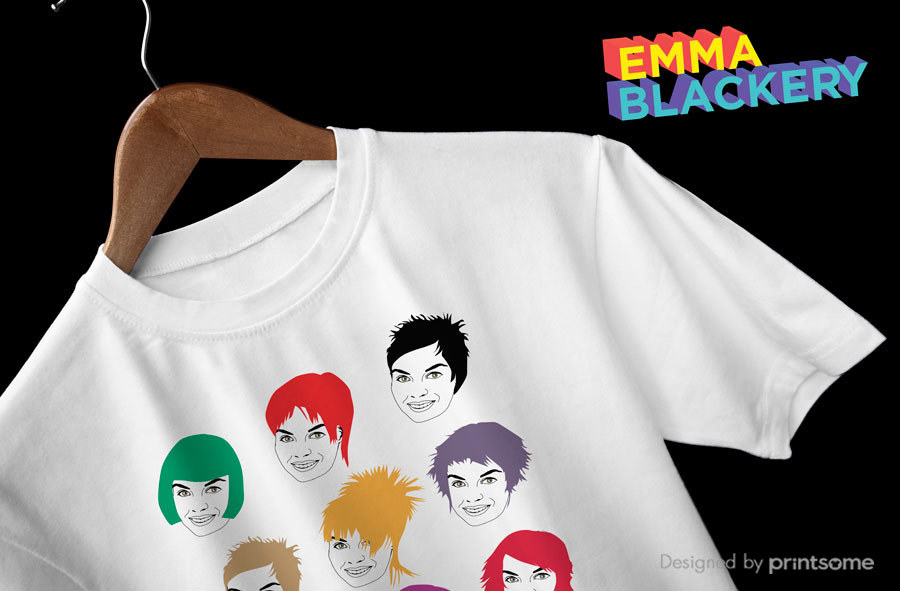 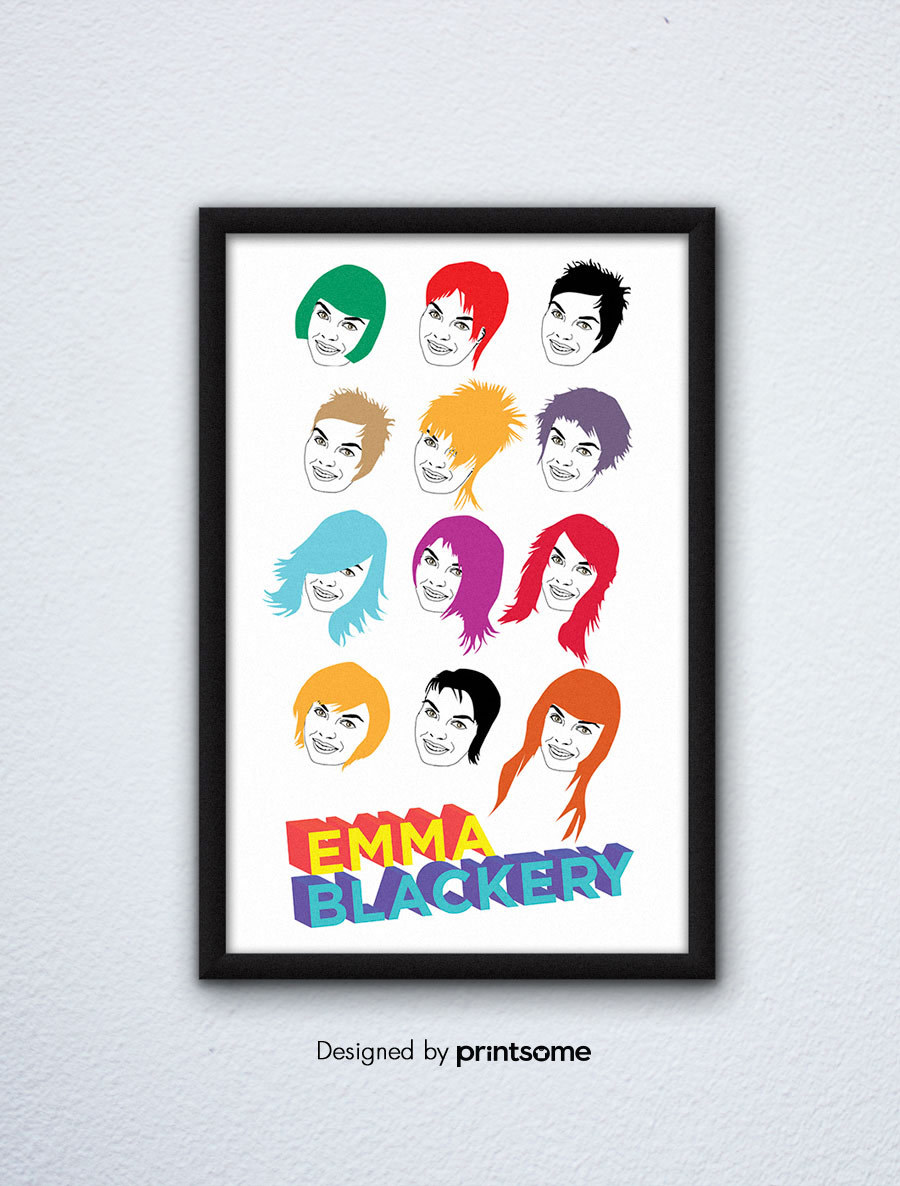 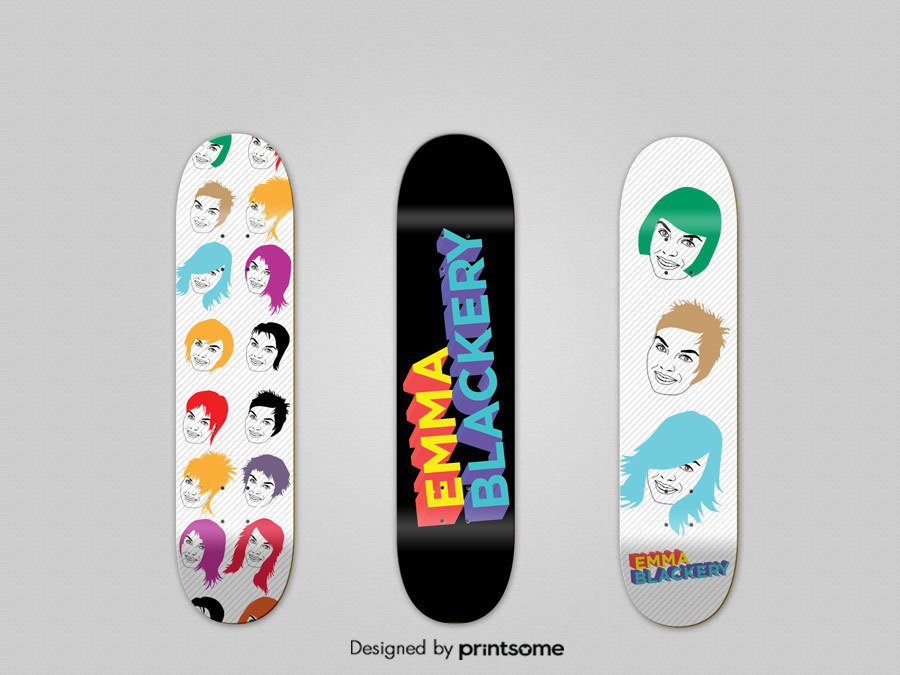 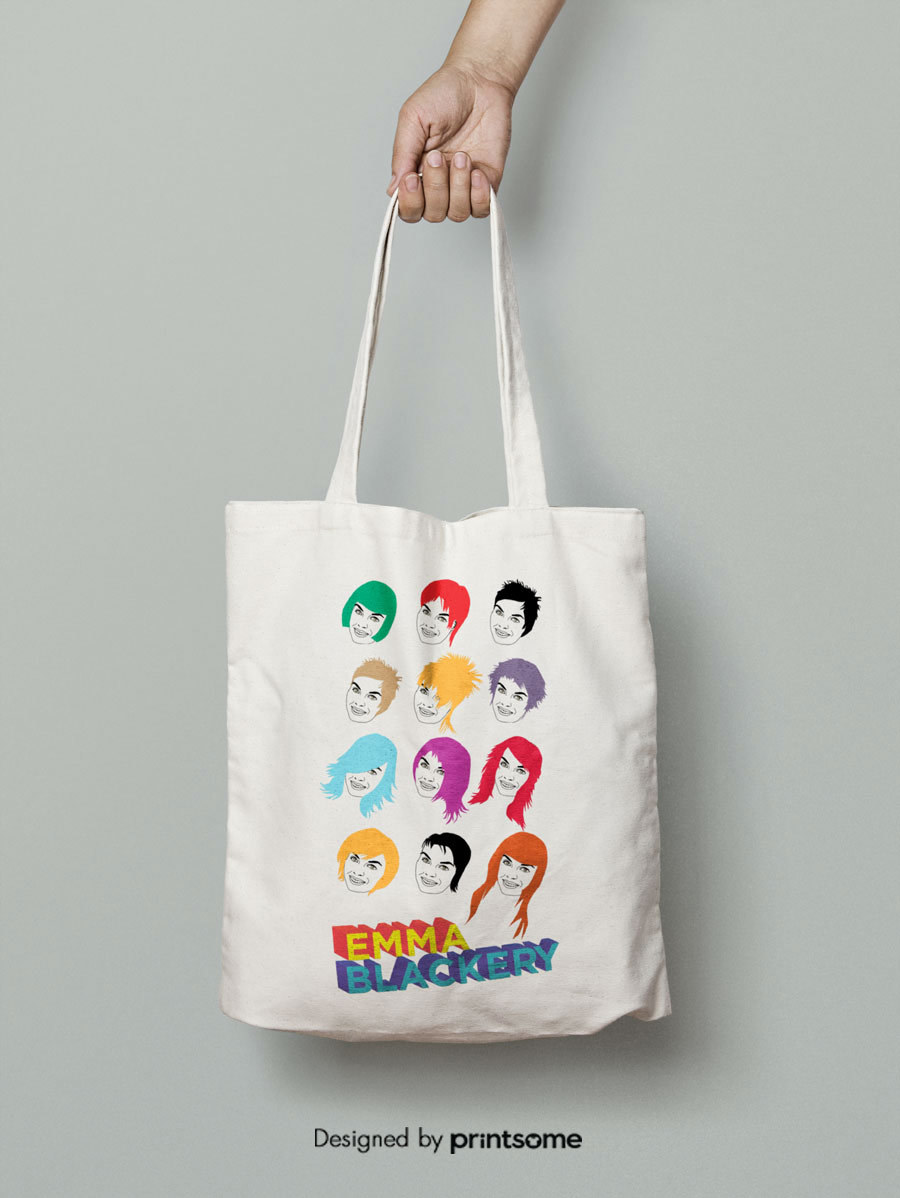 You can find most things in the Dan and Phil shop, from school stuff to iPhone cases and they even have a gift card (along with all the other more typical merch, like t-shirts and posters). Dan and Phil presented us with a bit more of a challenge, which we love, it makes us think outside the box. For this comedy duo, we took their faces as the most iconic element, illustrated them and used some of their most famous quotes to create some novel gear for their shop. After all, if Charlie can have his own tea, why can’t Dan and Phil have their own jam?

Note: You may also be interested in ‘21 of the best YouTuber merchandise shops out there.’ 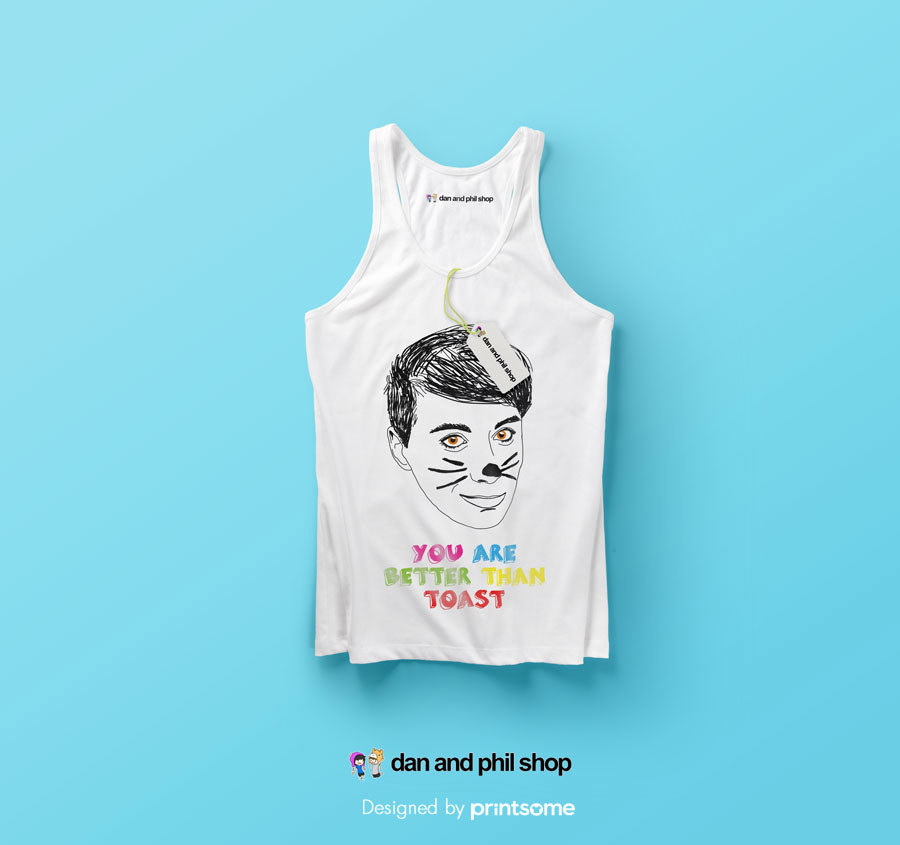 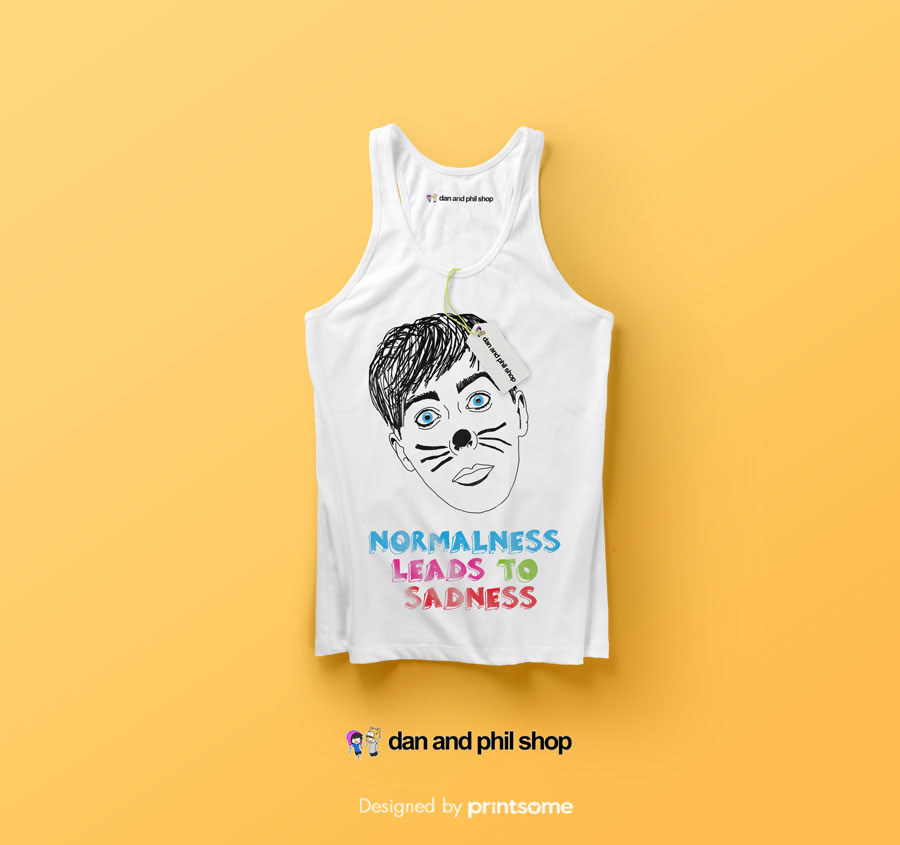 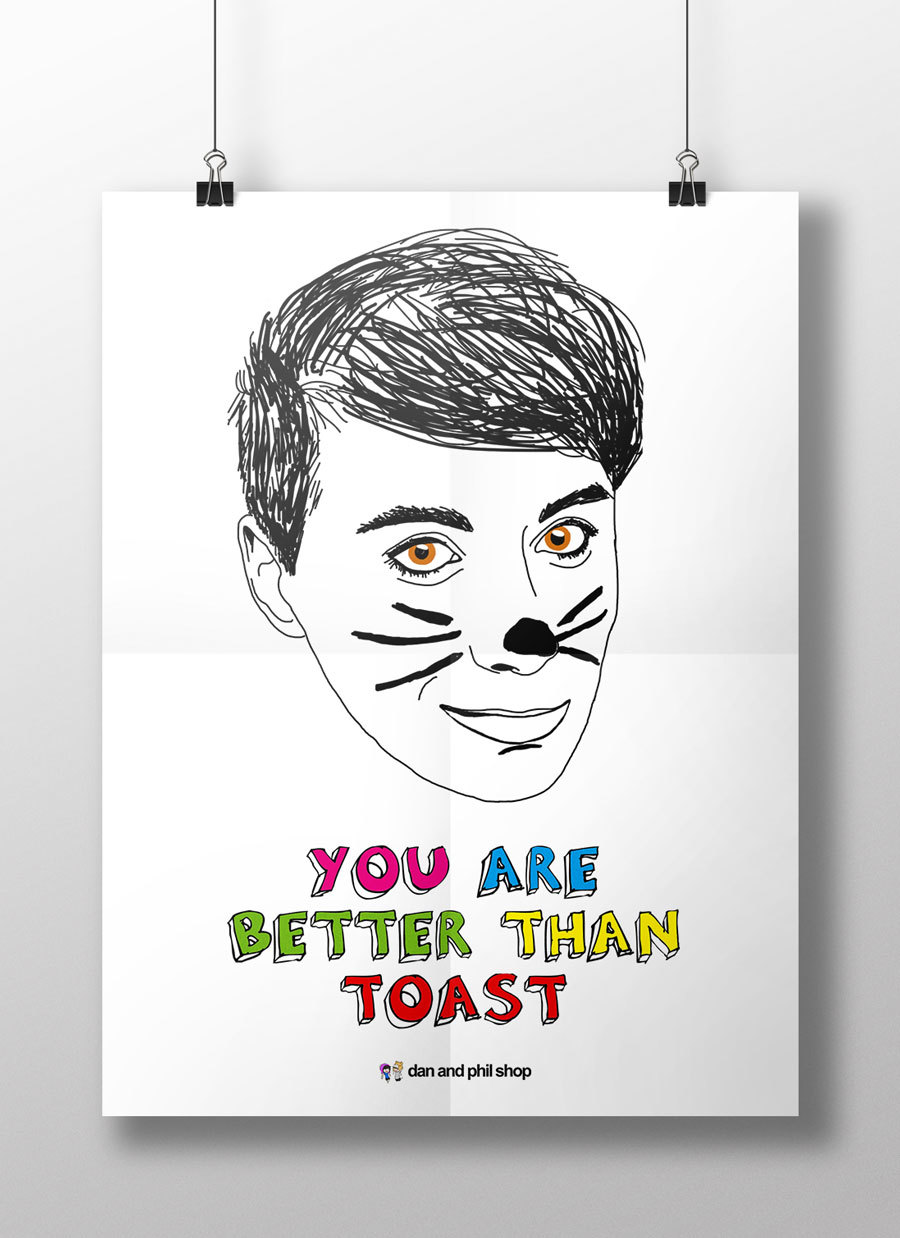 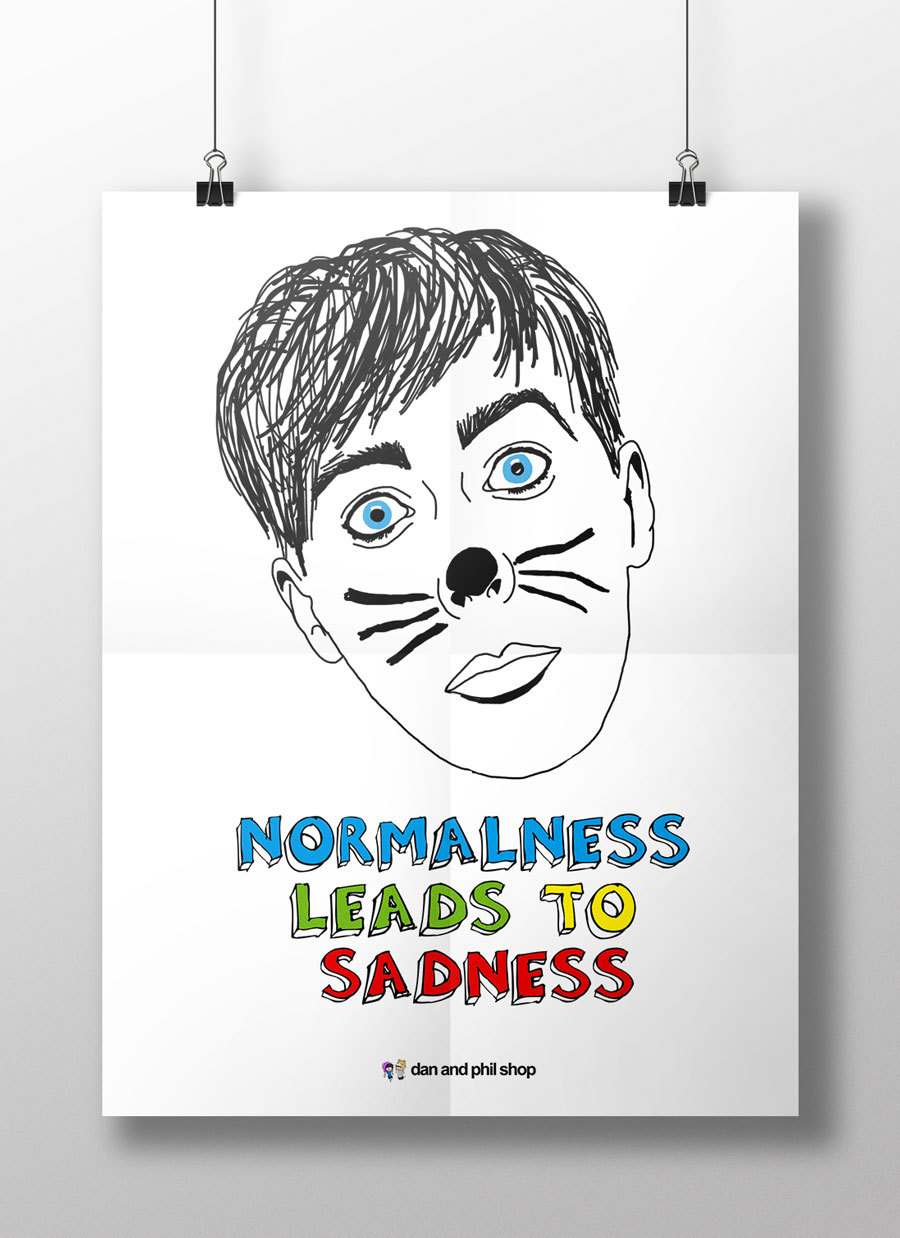 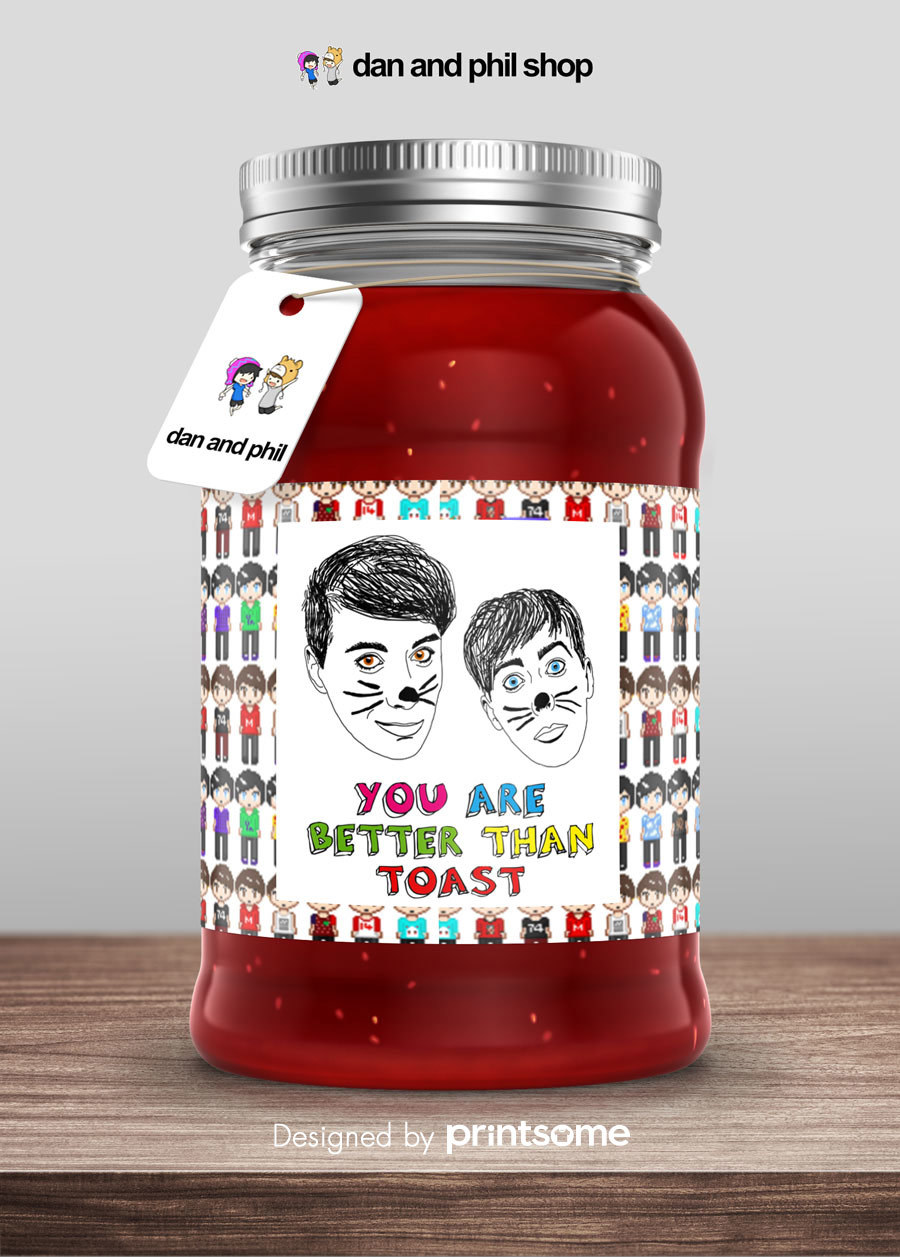 Are you a content creator? Would you like to add a new source of revenue by selling merchandise? ? Say no more. We have years of experience printing T-shirts for YouTubers. Learn more!

All things pink and pretty and friendly, and isn’t it just so comforting to see her at the beginning without any makeup, it makes her seem far more human? Let’s face it, a big spot on a celebrity’s face makes everyone’s day, especially if you’re aged 11-18. As Zoella has the makeup part of things completely covered (forgive the pun), we decided to take a more traditional approach with the new designs for her. Unlike Emma, Zoella has got the branding down to an art, which is no wonder since she has the backing of Superdrug – not called super for nothing you know. 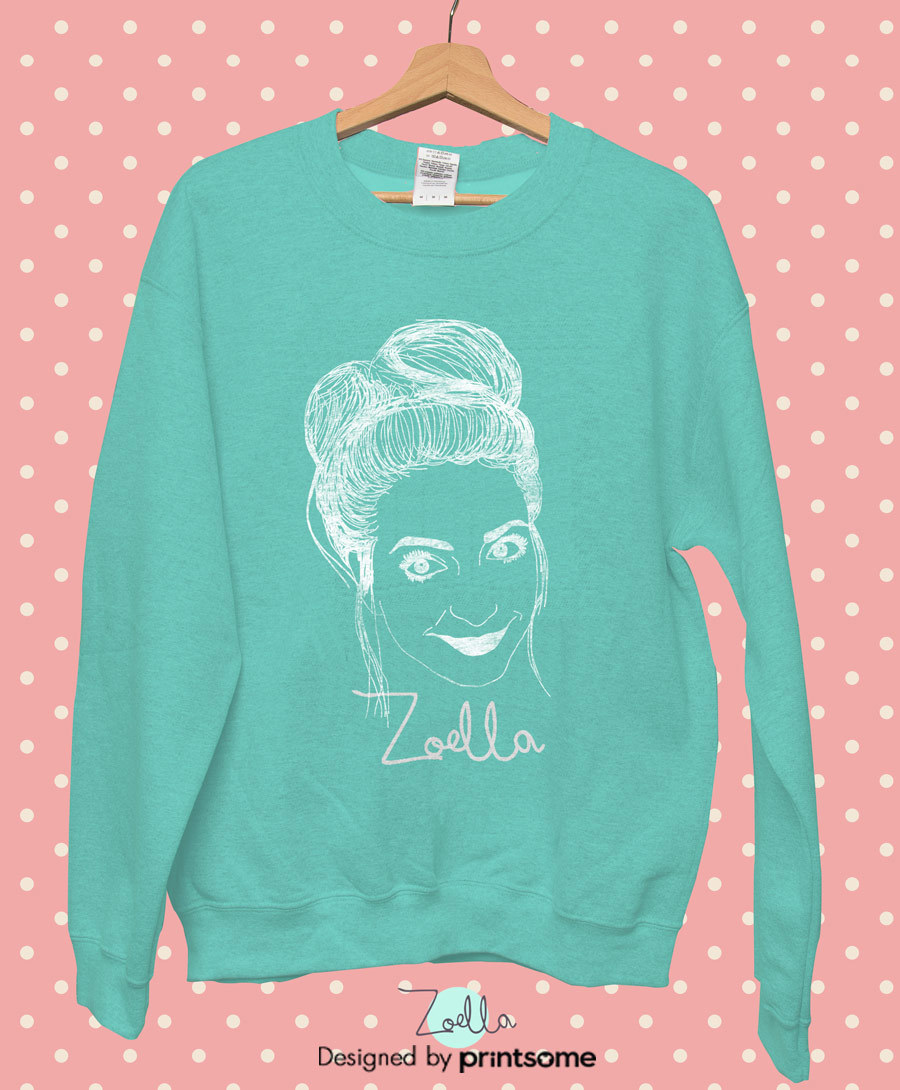 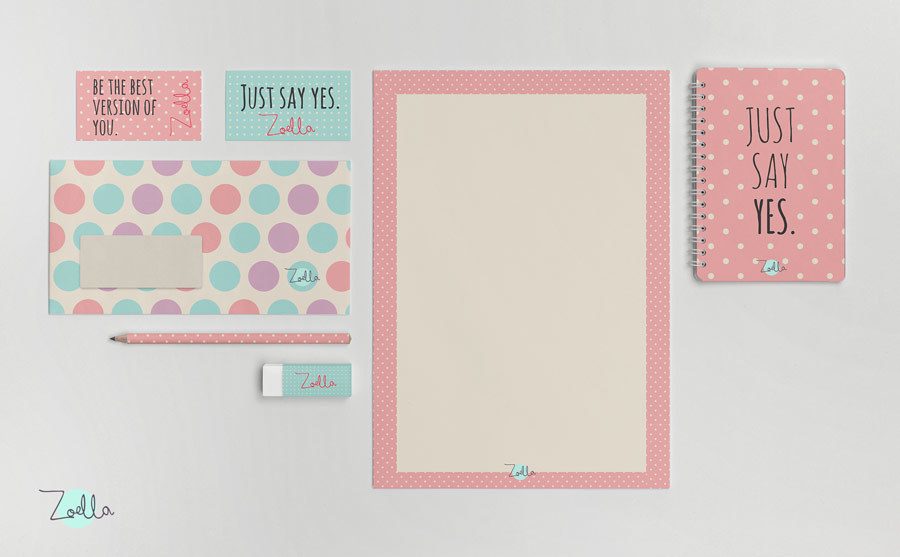 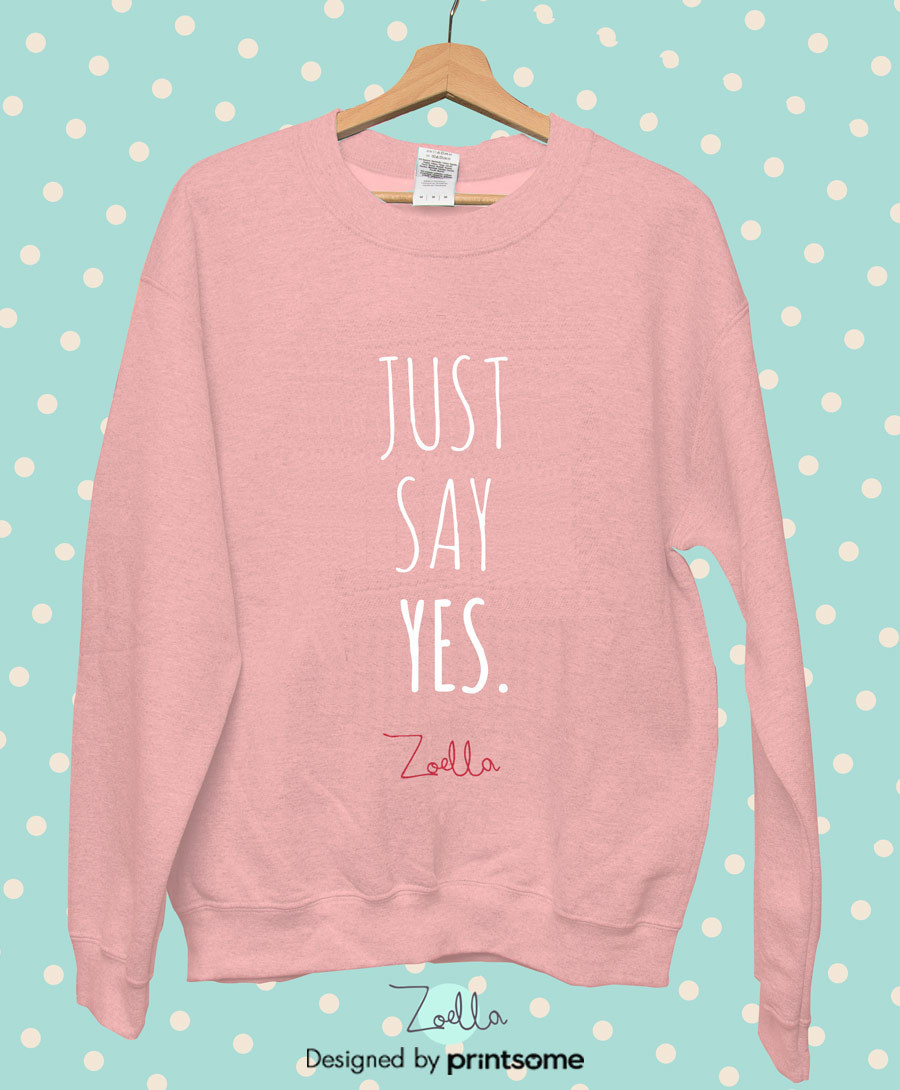 After the variation in colour and designs with Dan & Phil’s pixel folk and Zoella’s guinea pig fronted make-up bag, Alfie Deyes merch has a much more sober, mature style to it. At his shop, you can find a lot of monotone apparel, with high-quality photography and simple logo applications. We thought it would be cool to jazz things up a bit and design some more original stuff for him, and since he loves skating (apparently) it was too tempting to create a series of boards for him too. 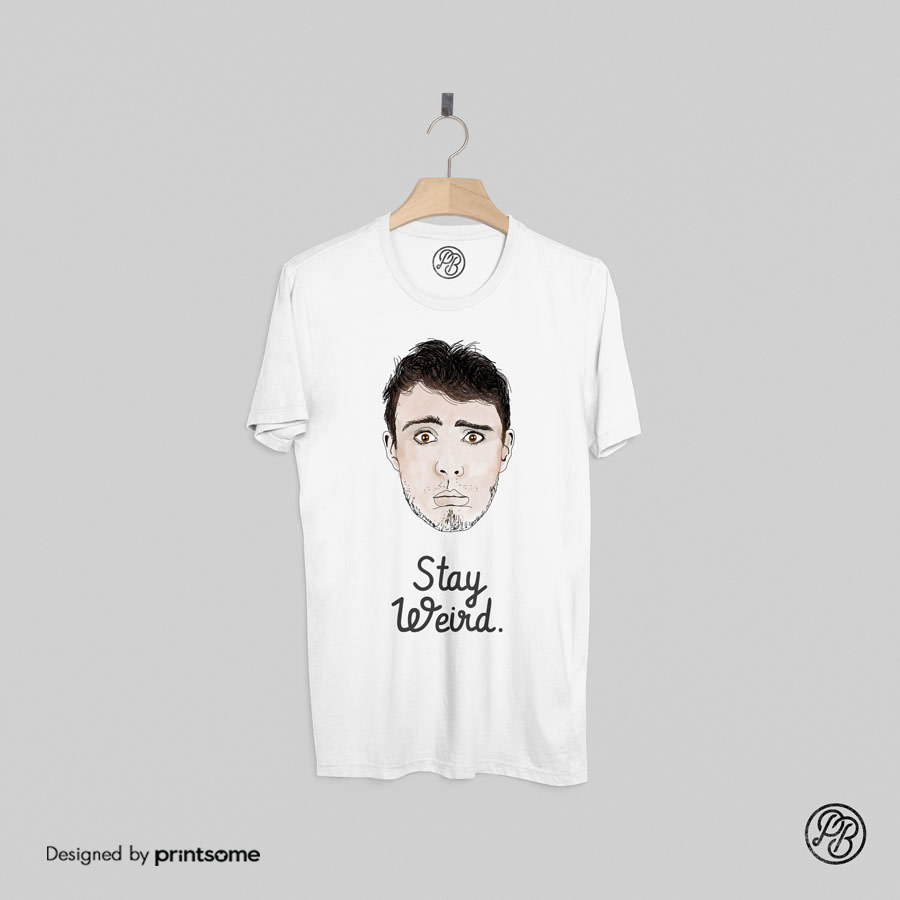 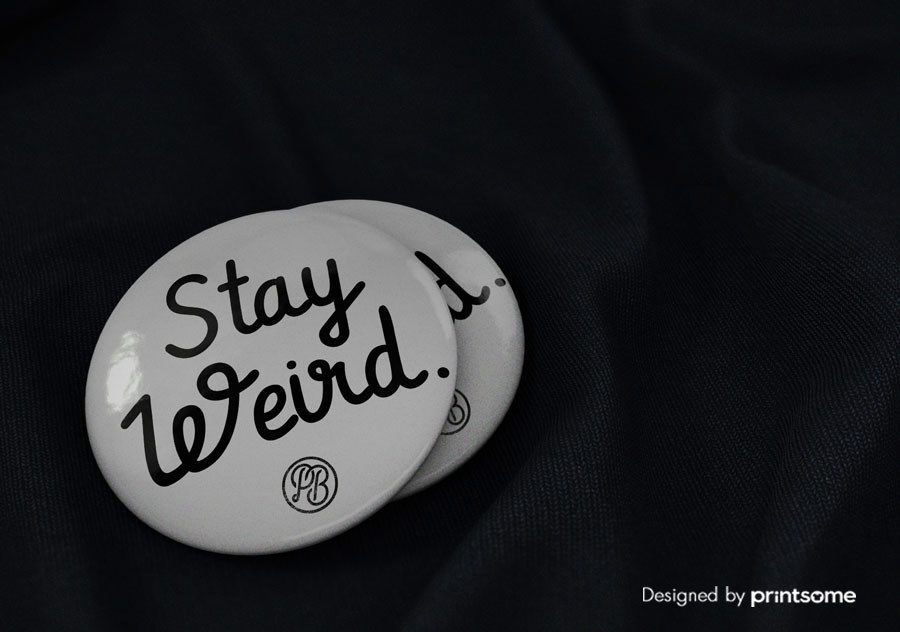 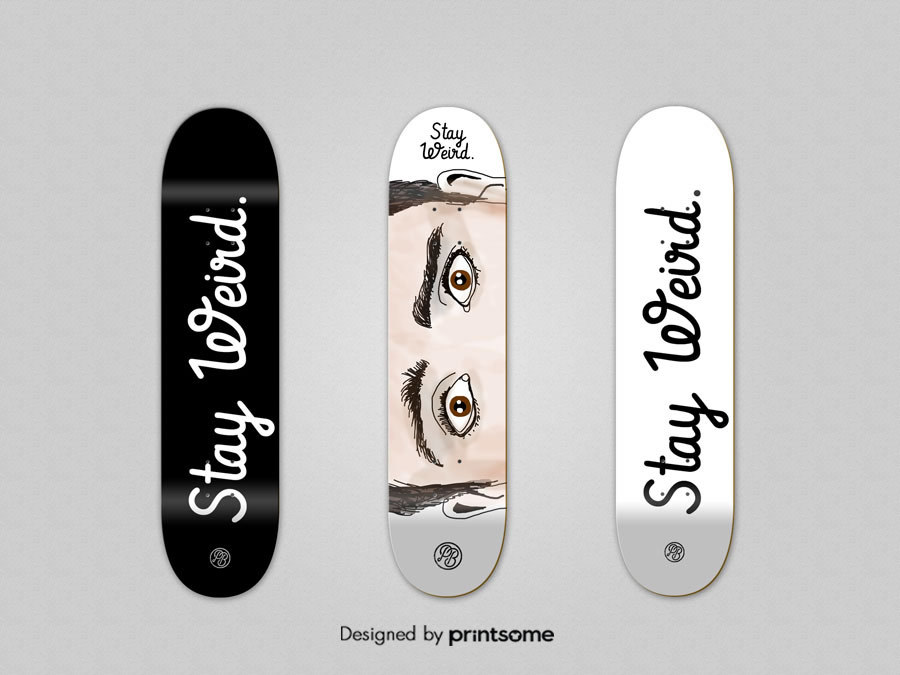 Our delivery services work all over the UK and can adapt to most deadlines.It doesn’t matter if it’s 15 or 15,000 T-shirts. Printing garments has never been this easy.

Printsome is an online T-shirt printing agency in the UK based in London that delivers all across the UK, from printing T-shirts in Brighton to York and anywhere in between. So, if you’re after a T-shirt or custom clothing, get in touch for a quote and indulge yourself in some awesome customer service.

How actors negotiate their likeness for merchandise 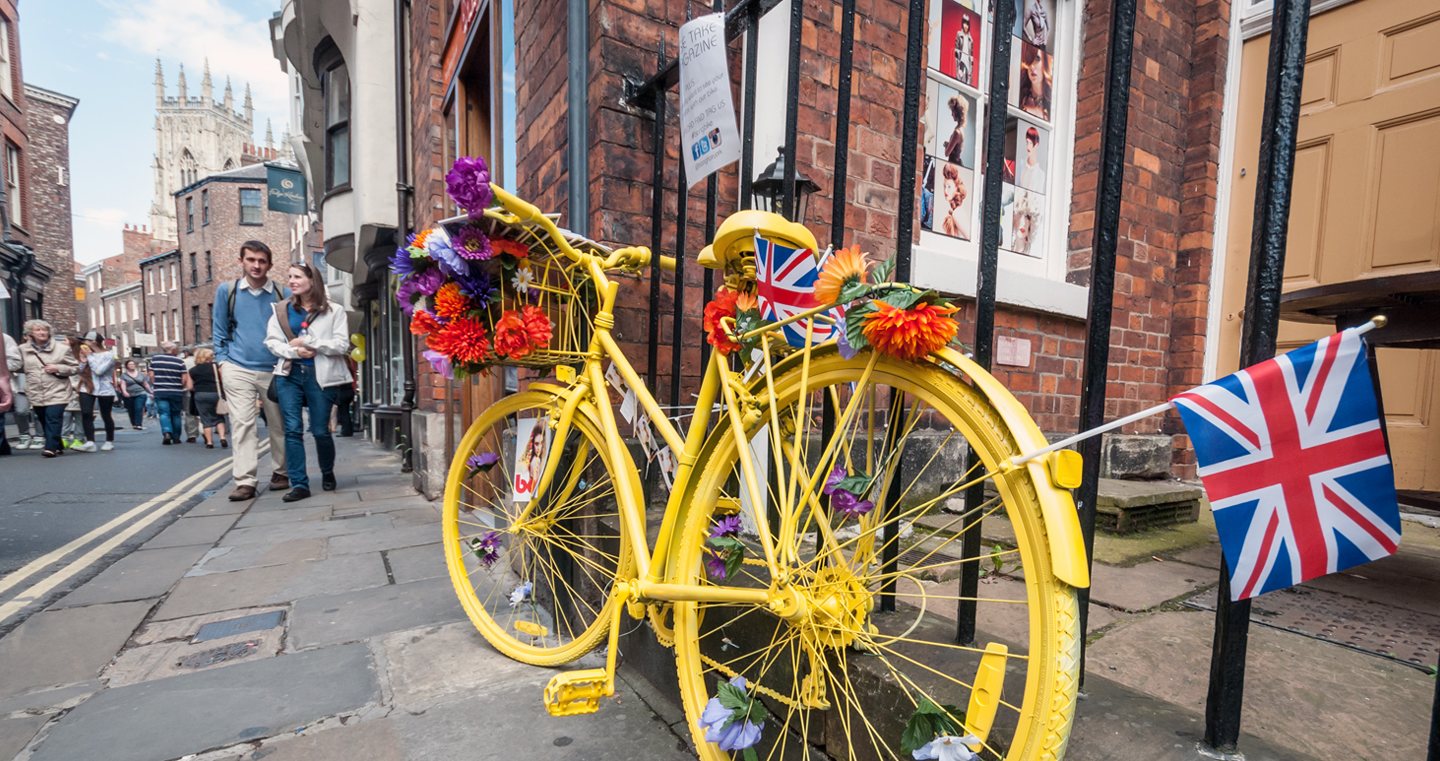 In celebration of Tour de Yorkshire 2019

Why video game merchandise lags behind

The best Eurovision merchandise of all time