If football kits were designed by fashion designers

Thanks to recent collaborations of high fashion designers like Alexander Wang with sports labels such as Adidas, the athleisure trend doesn’t seem to be going anywhere soon. And if that’s the case, then I can only wonder: Where can it go from here?

I mean, they’ve done pretty much everything — and that’s when I realised. Football clubs!

Players like Cristiano Ronaldo and David Beckham have had a flirting relationship with labels for a while now, but they’ve never received the high fashion treatment inside the pitch. So how would football kits look like if they were designed by fashion designers?

Disclaimer: At first I was thinking of aligning clubs with designers of their respective countries, but then I thought about it better and realised that at the end of the day these teams are not sponsored or have their kits produced by brands of their native lands. SO I felt justified to sort of just randomly pair up the teams and designers. 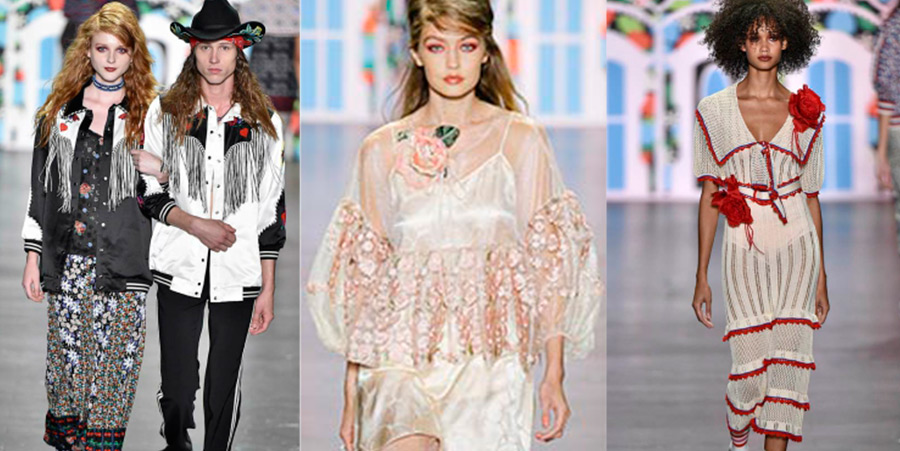 On a first look, it might seem like the classic white kit from the current Champions League titleholders wouldn’t be compatible with Sui’s flamboyant style, but we’re sure that the American designer could make it work. I’m picturing an entirely white ensemble with a bit of transparency and embroidery along with cowboy-inspired white fringes. I’m sure Cristiano wouldn’t mind. 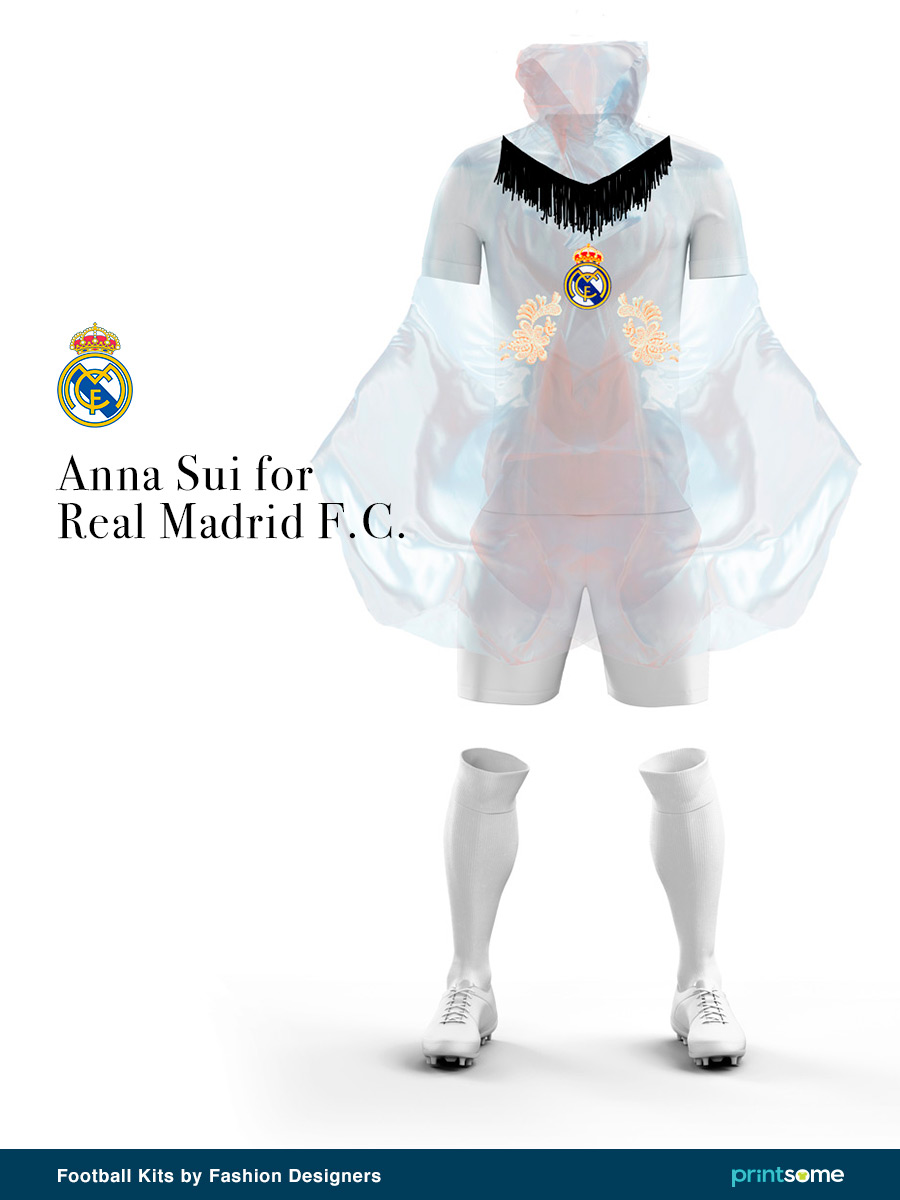 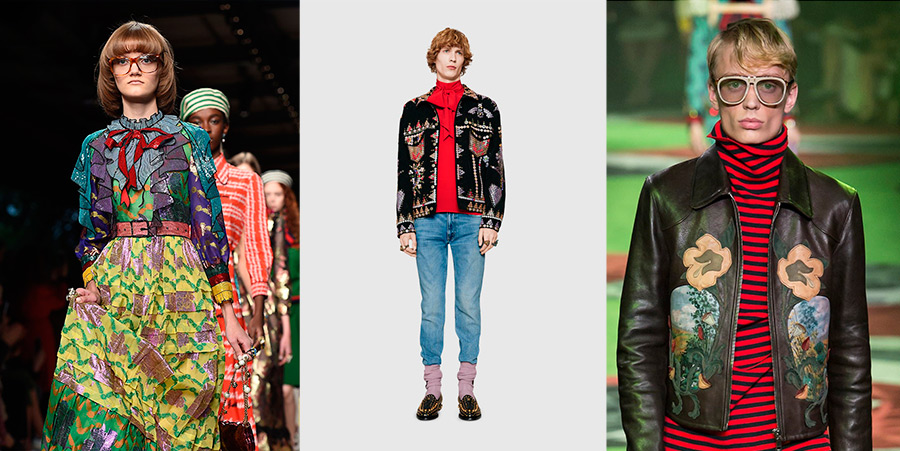 Alessandro Michele is responsible for putting Gucci back on the map (not that it ever went away, it just had a couple of lacklustre years) and has become a bit of a darling among the fashion crowd as of late. Known for its decorative style, the creative director of the Italian brand would probably fully embrace the colour of the Bayern München Kit, as it is very similar to the Gucci red, and to really make it stand out, decorate it with embroidered snakes and flowers. And maybe he would throw in a pussy bow for good measure, too. Just maybe… 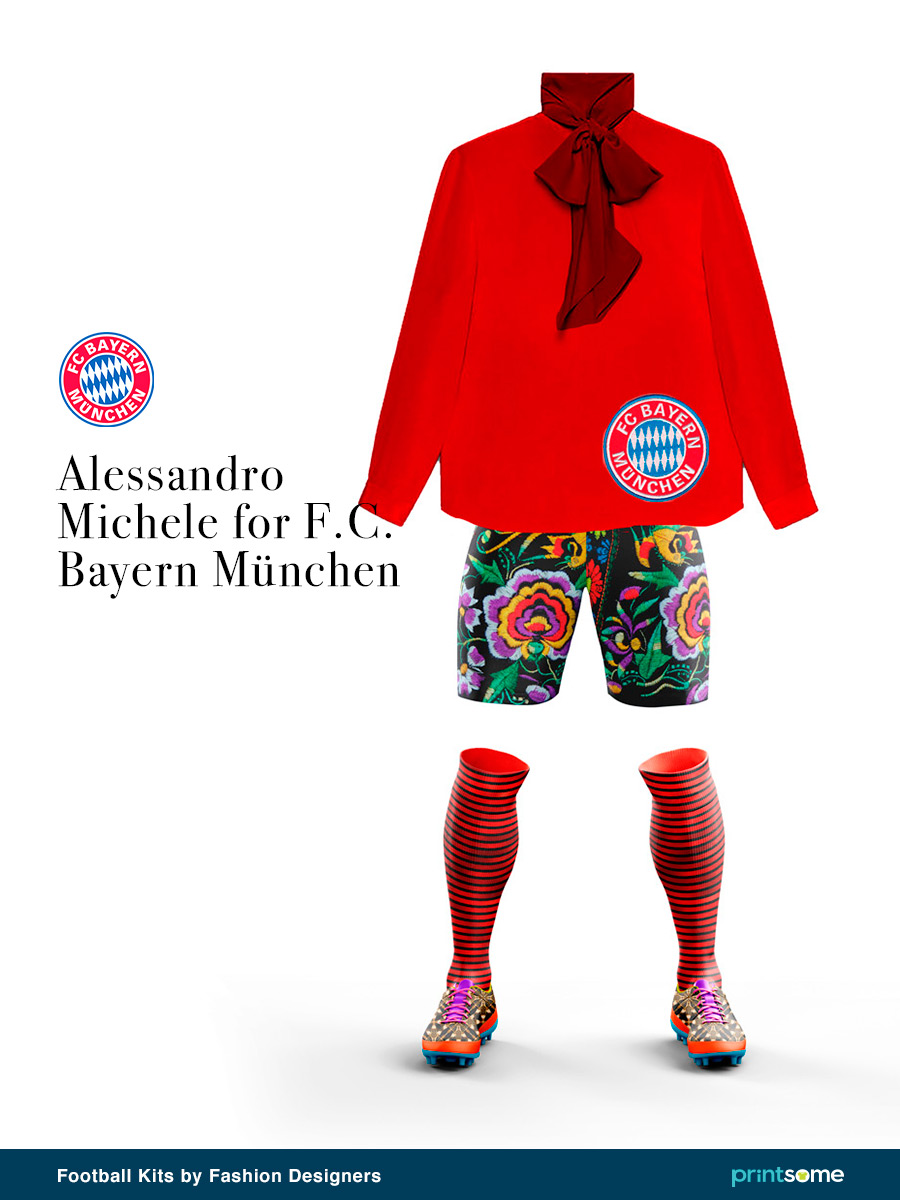 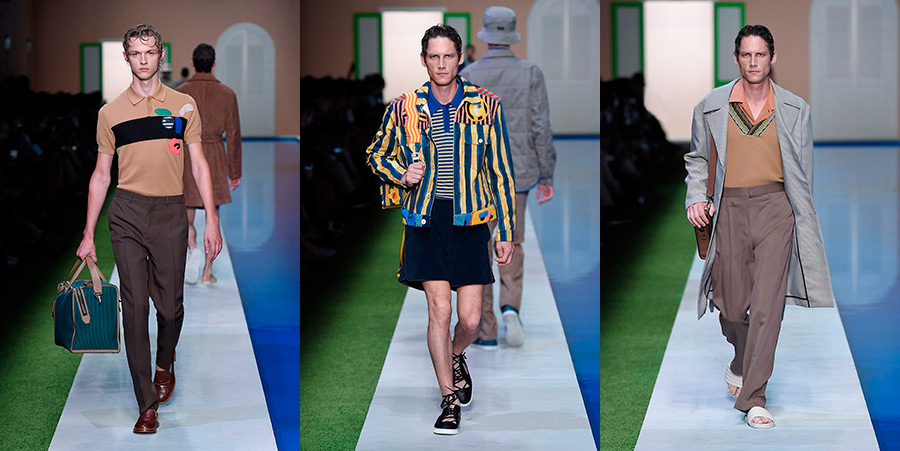 Germany is not a country that it’s known for its fashion sense, so it’s no wonder people get surprised when they find out that Jil Sander, Hugo Boss and the king of fashion himself Karl Lagerfeld all share the same passport as Angela Merkel. For the team of its native land, the creative director of Chanel would probably embrace the style of the latest Fendi Men collection: Cuban collars, bright colours and whimsical embellishments. 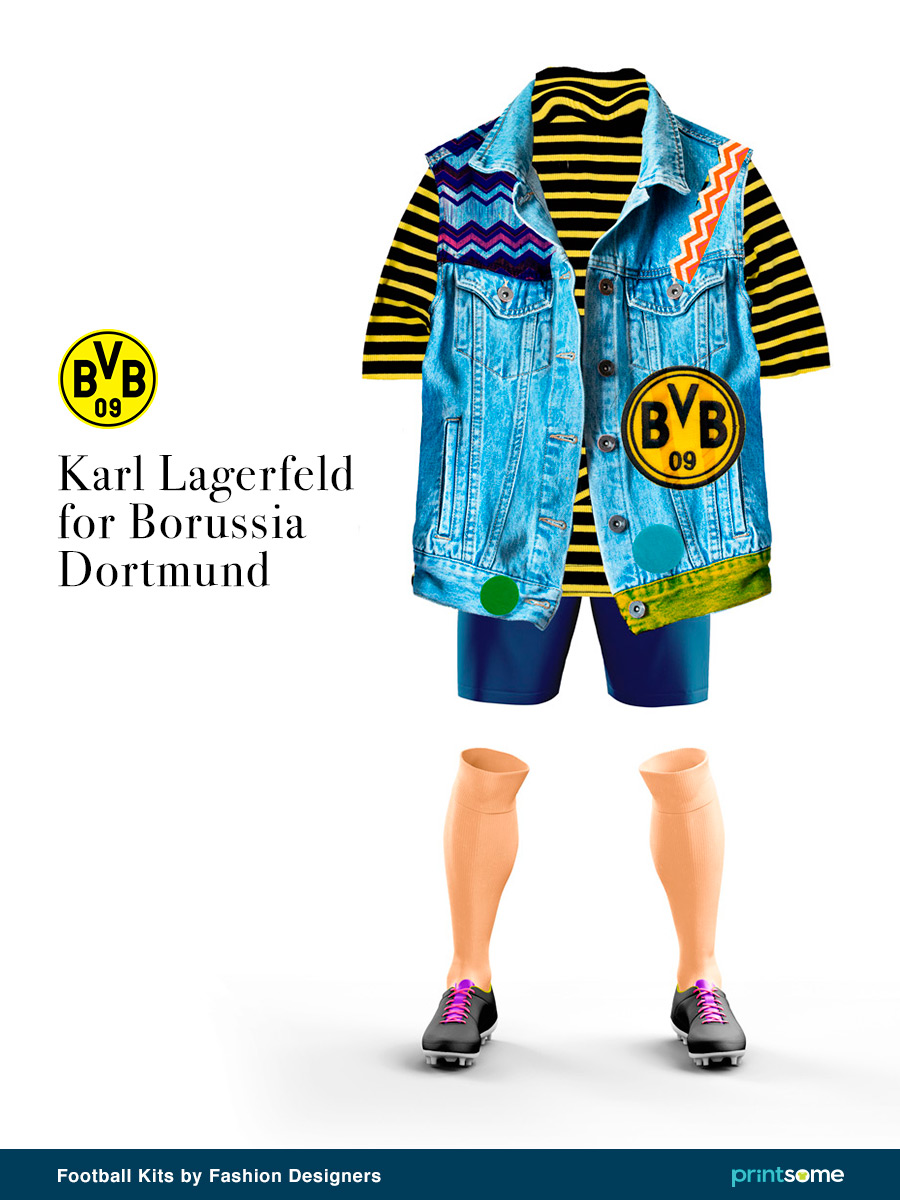 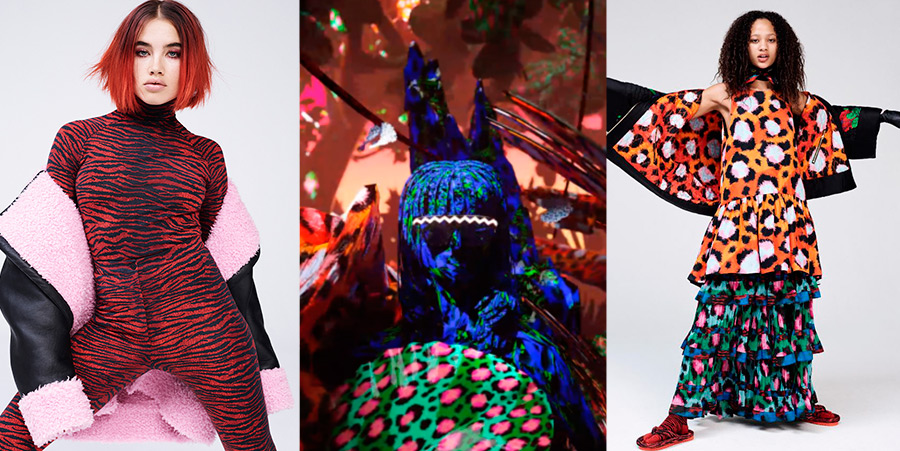 Now, Kenzo LOVES prints. They love prints and patterns more than we do — which is saying a lot considering that’s how we make a living. So needless to say, this football shirt would be printed everywhere. For Arsenal, Carol and Humberto would go down the same route they took for their collaboration with H&M, which means bright (Arsenal) red in a tiger print and maybe a dash of pink. 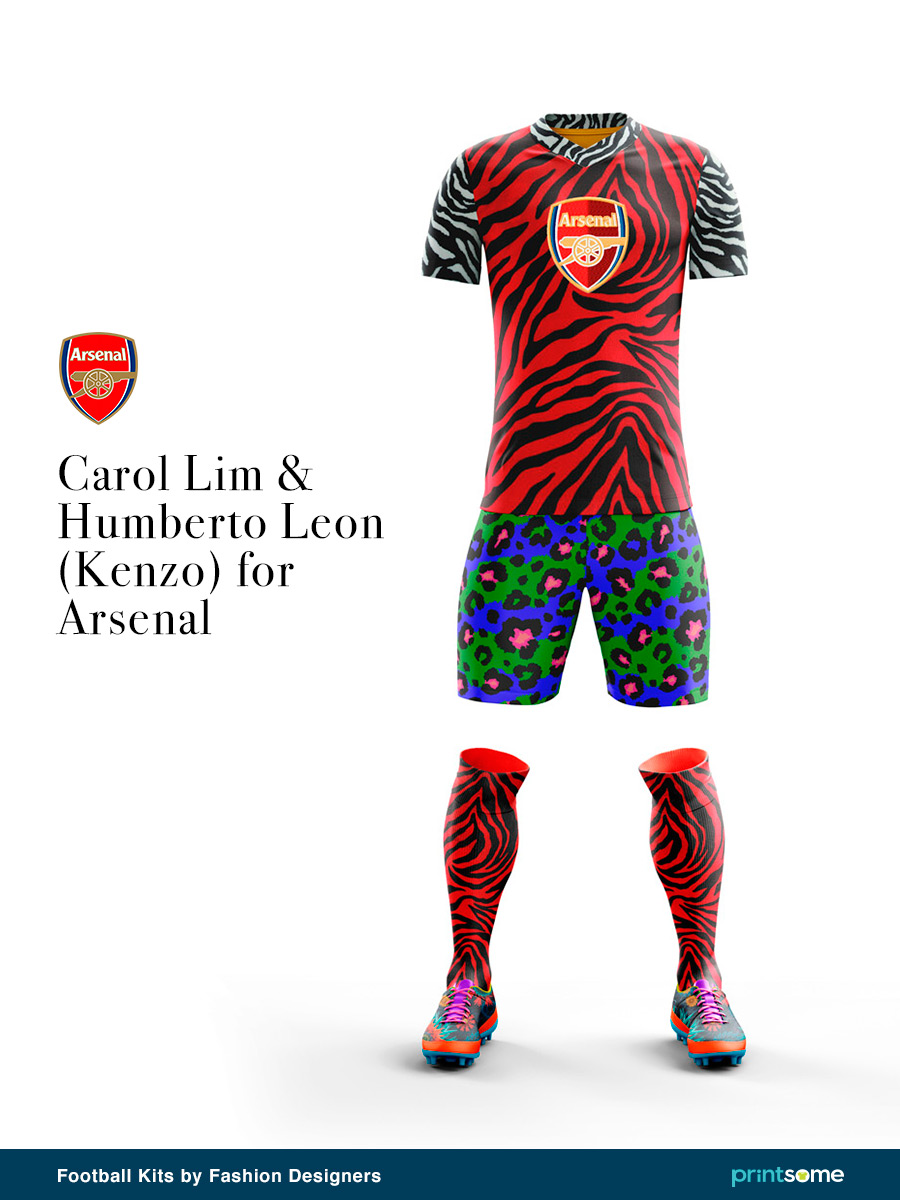 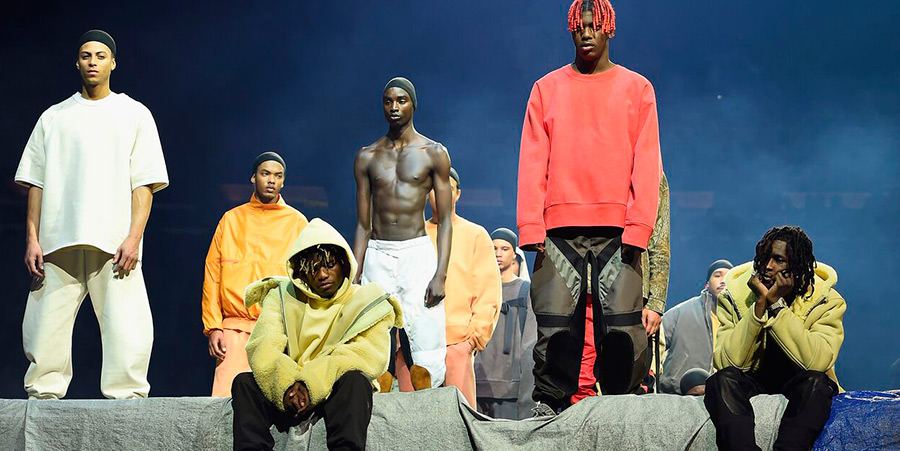 Lucky for the Juventus team, the “Gold Digger” rapper has a history of designing sportswear thanks to his collaboration with Adidas. Since he is not a big fan of prints, I’m guessing Kanye would focus on the shape of the garment more than anything. Taking a page from his brand Yeezy, the Juventus’ new top would be an oversized T-shirt in black or nude tone with a sweatshirt style of fabric. 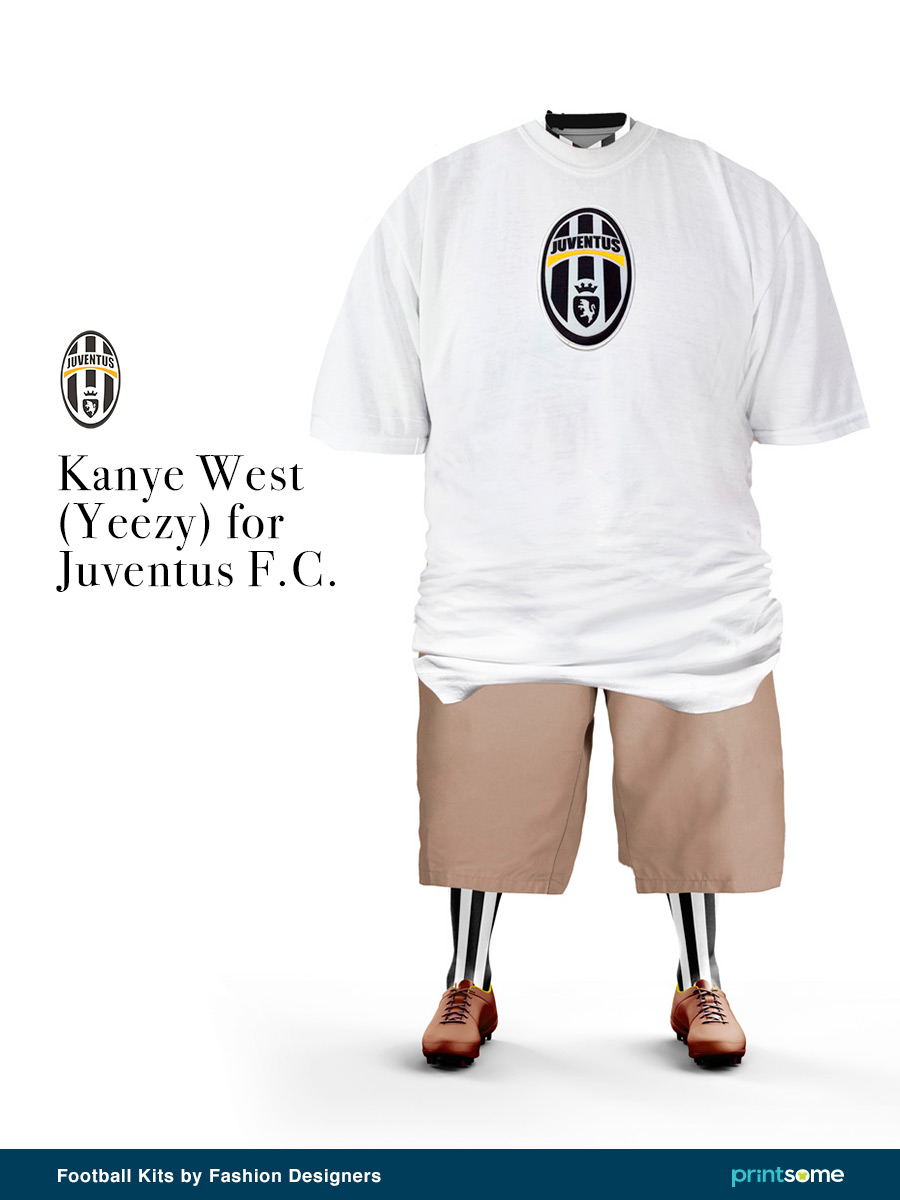 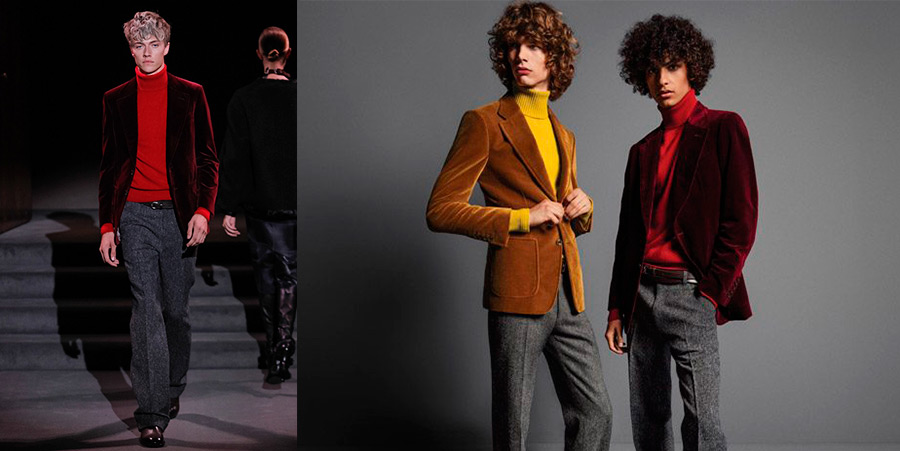 Tom Ford is a difficult one because he’s not known for his sportswear. The fashion designer turned movie director is not a fan of lycra, but do you know what he is a fan of? Velvet and fur. The idea came to mind as I was going through the images of his winter 16/17 collection and realised that these are materials that we have seen (several times) in some of his past collections. Yes, I do know that velvet and fur are some of the world’s worst materials to make a football shirt with, but when has Ford cared about practicality? 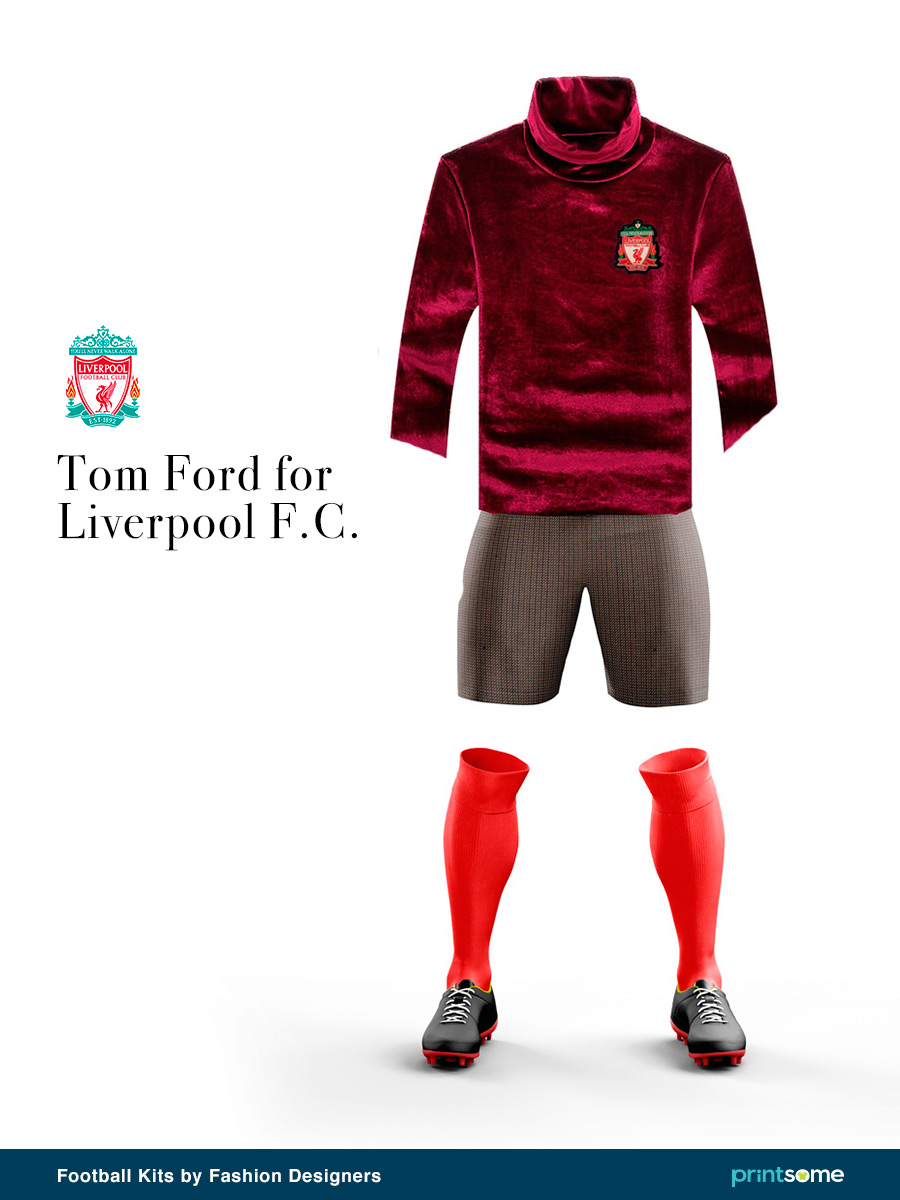 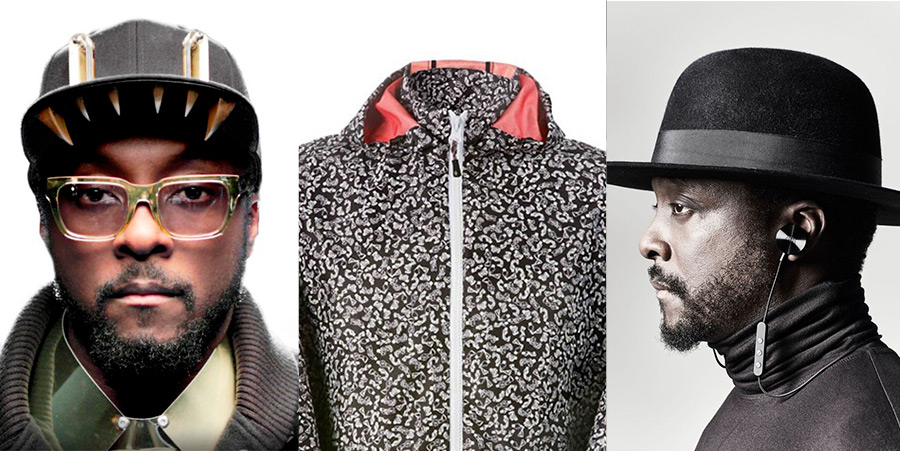 Both Will.i.am and the Barcelona team are known for staying ahead of the curve, so this just might be a pairing made in heaven. For the football team, we’re guessing that the Black Eyed Peas member would take a similar route to his collaboration with Coca-Cola — apparel completely recycled from plastic bottles. To top it all off, each kit would come with a brand new pair of Buttons headphones so Messi and the rest of the gang can play to the sound of their favourite tunes. 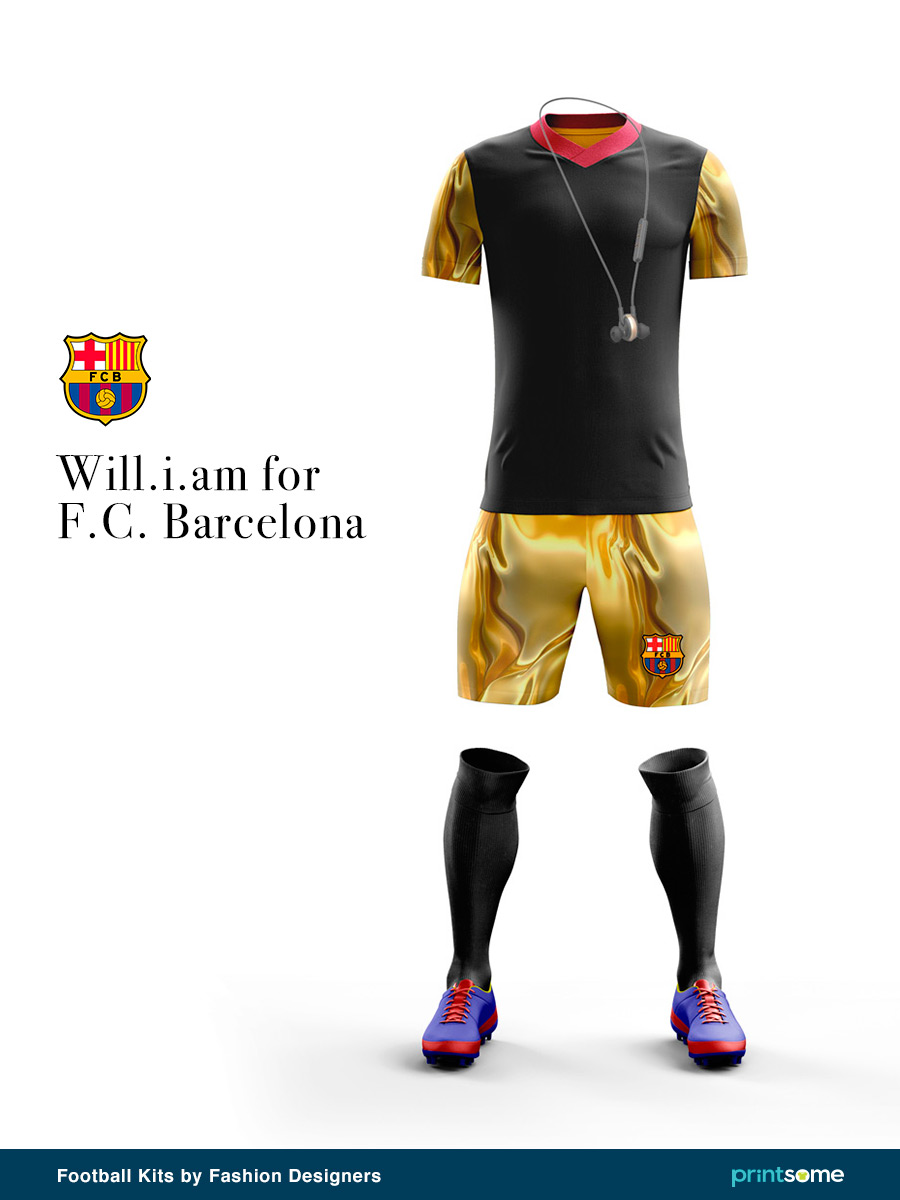 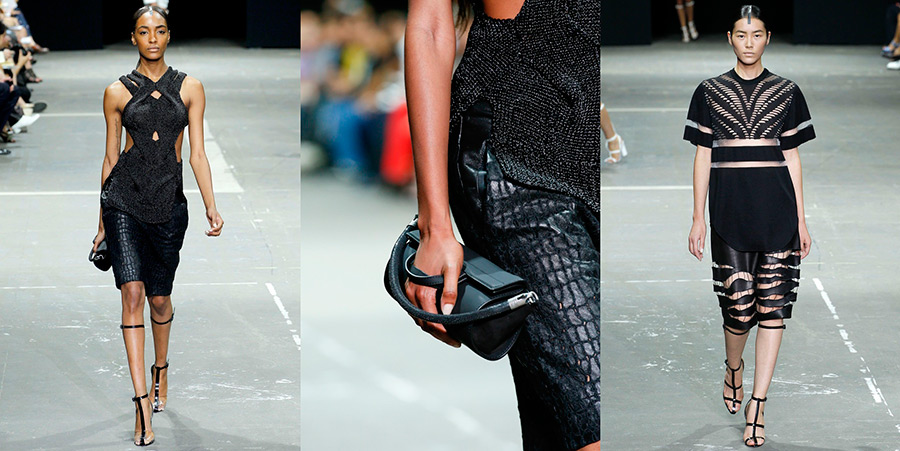 Gathering inspiration from his collection for H&M, Wang’s kit for A.C. Milan would be minimal, with subtle prints and a slightly oversized fit. The red stripes would also take a less prominent role. 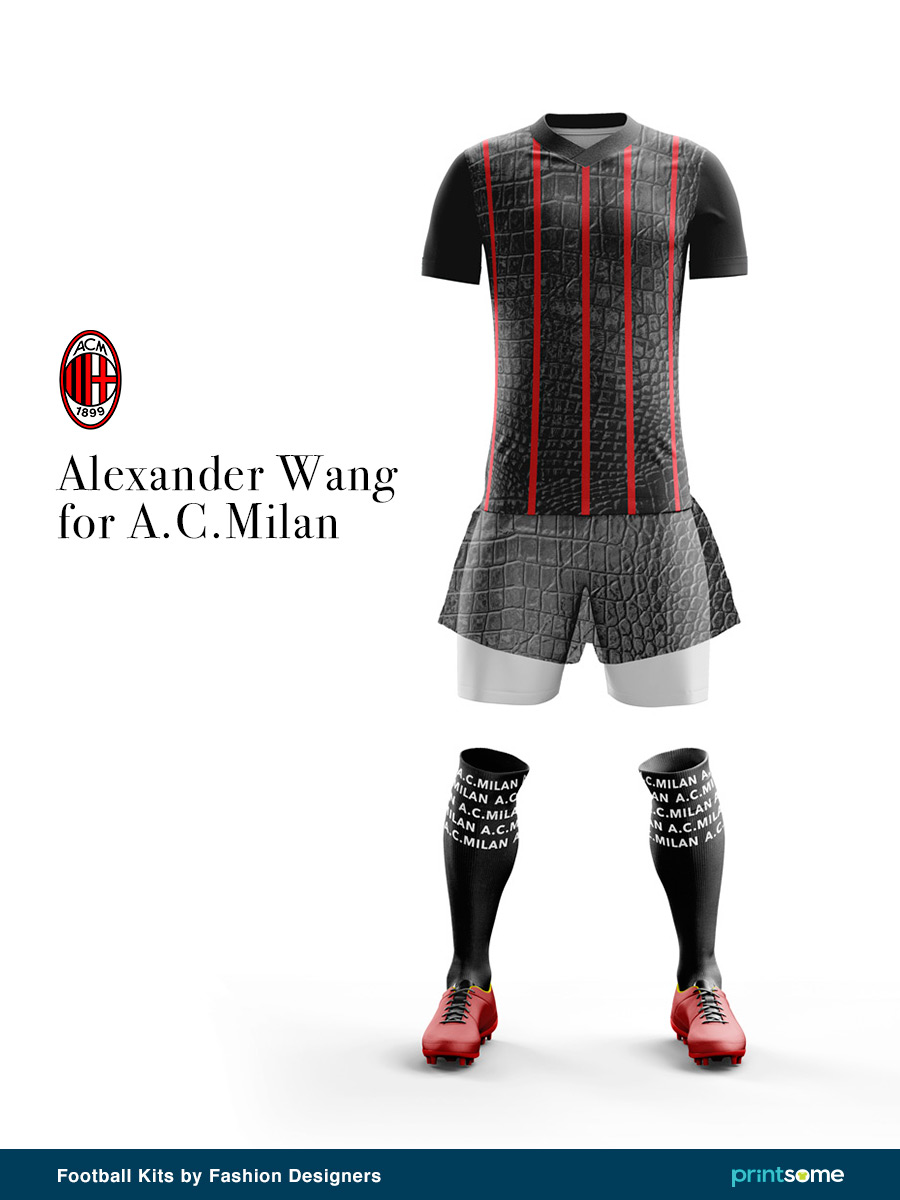 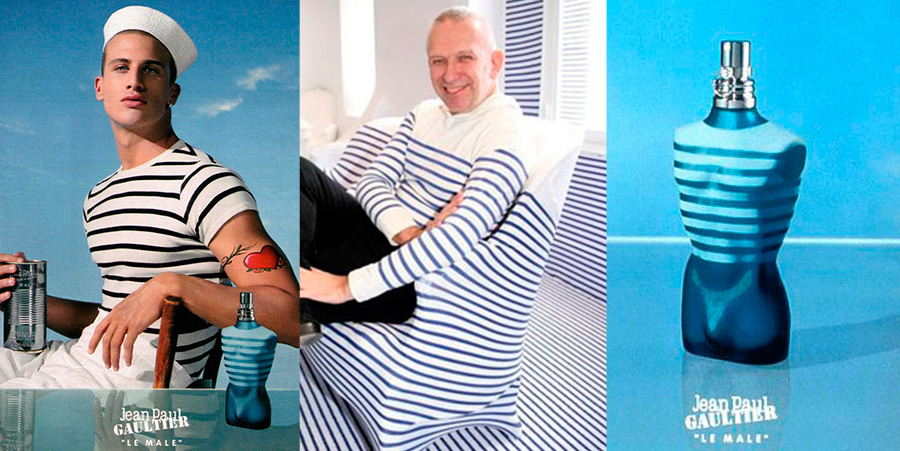 What else do you think of if not the infamous Madonna bustier when someone mentions Jean Paul Gautier? On the other hand, there’s also “Le Male” which is the male version of the corset. Although I don’t know how well would Chelsea fans take it when their team got decked out as French sailors. 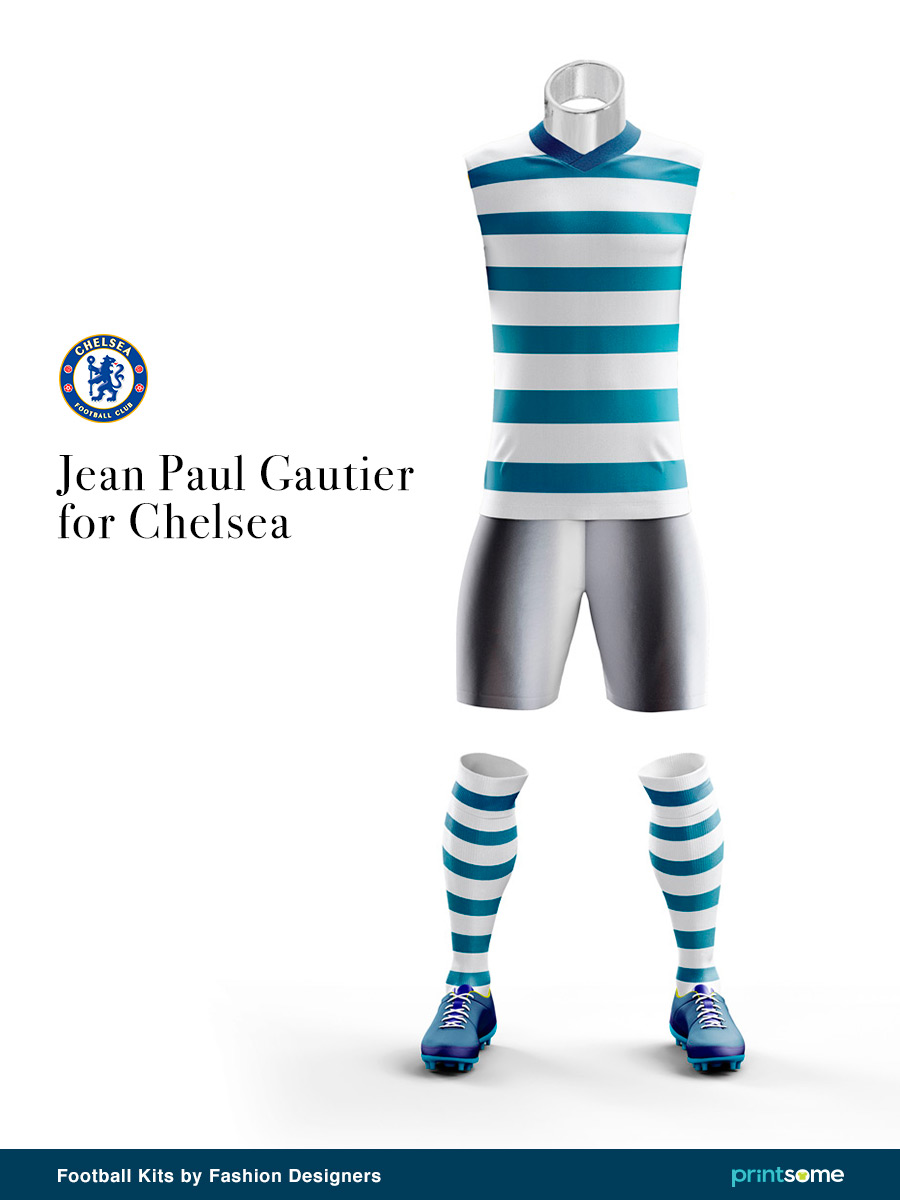 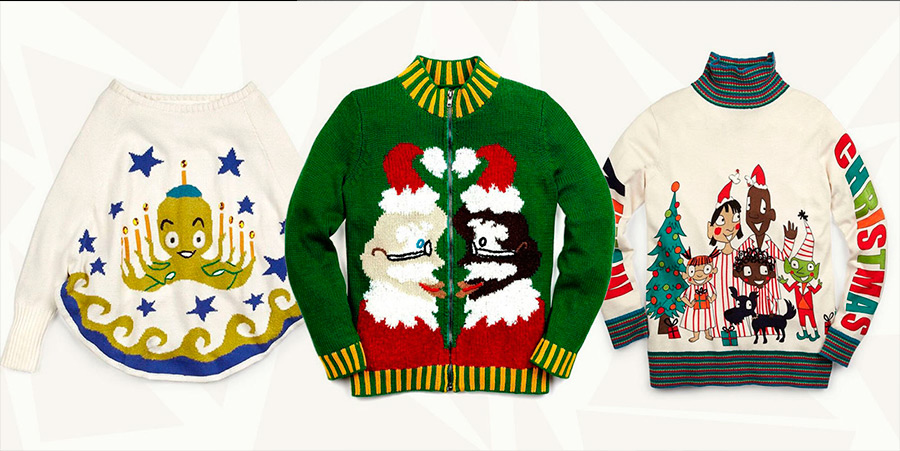 And we’ve saved the best for last. Yes, along with TV host, celebrity and one of the coolest people alive, Whoopi Goldberg has added the title of fashion designer to her CV. And to make things even better, the Color Purple actress is not releasing an average clothing line, but an ugly Christmas jumper collection! Manchester probably wouldn’t be able to wear this uniform all year round, but it would sure be on point during the holiday season. 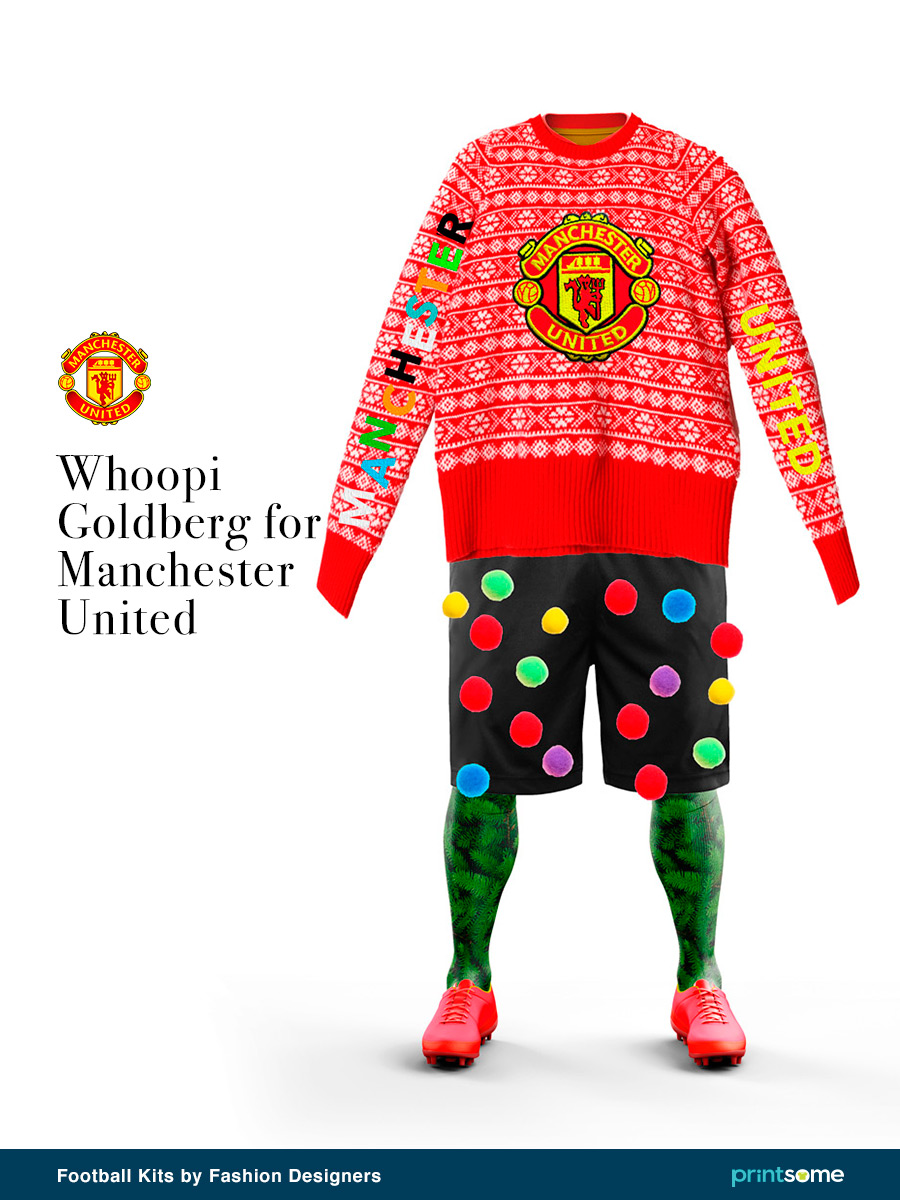 I repeat, these pairings have been chosen randomly! So don’t come for me on Twitter if you don’t like the new, fictitious uniform of your favourite team.