We’re betting you won’t know all of these fun facts that we’ve gathered up for you. It’s just those interesting tidbits that you can’t wait to share with all your friends, but instead of pestering them, how about printing them on a T-shirt? And let the garment do the talk for you.

And may we just say that we think these would make pretty good conversation starters at any bar. Are you ready to have your mind go “boom!” 12 times in a row? Then just keep reading.

Does that place sound sort of familiar? That’s because it’s from the animated film Aladdin, not geography class. This cringe-worthy fact came from a poll of Republican primary voters done by Public Policy Polling.

A further 57% said they weren’t sure, and just 13% were opposed to it. It’s no wonder the pollsters used the hashtag #NotTheOnion (the satirical news website) when they shared the findings.

Democrat primary voters were also polled, and 19% were in support of bombing Agrabah. Better, but still not great. 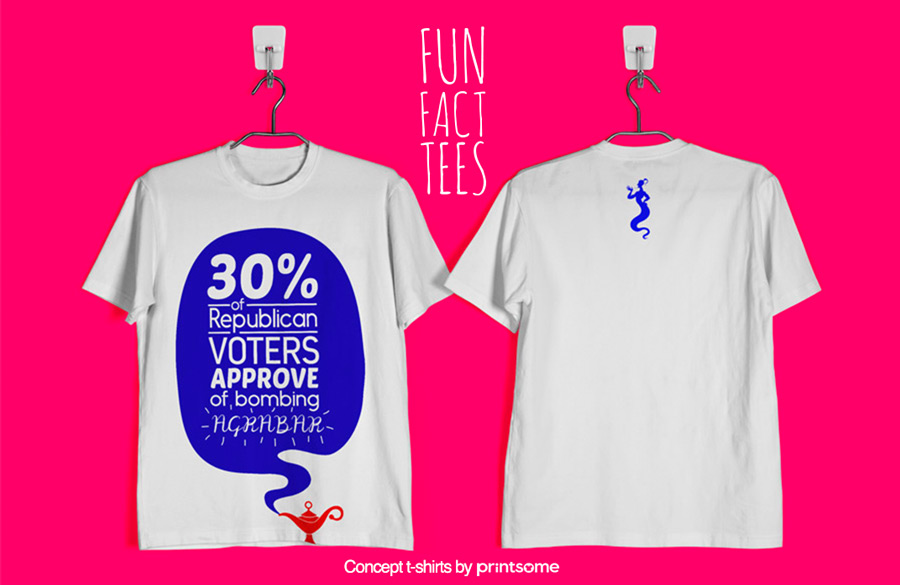 And you thought smileys were so modern. Writer Ambrose Bierce wrote a letter in 1887 that included an idea to represent a smile with a sideways parenthesis mark. It’s not quite the same as what we use today, but it’s pretty darn close. Which makes us 🙂 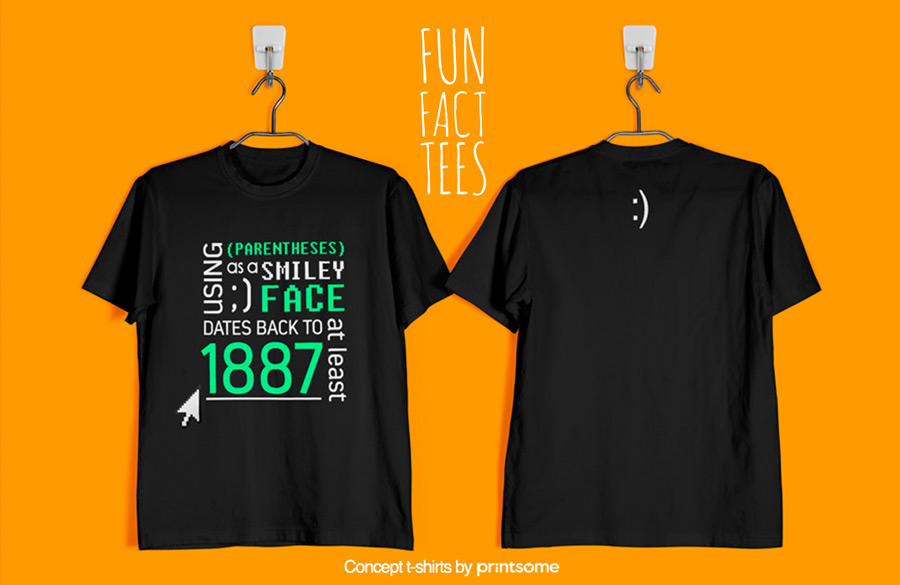 According to statistics, in the UK about every year. In case you were wondering, the chances of that happening to you are 1 in 2 million. Doesn’t sound very likely, now does it? Now compare it to the chances of dying on a plane crash which are 1 in 11 million. Puts things in perspective, doesn’t it? 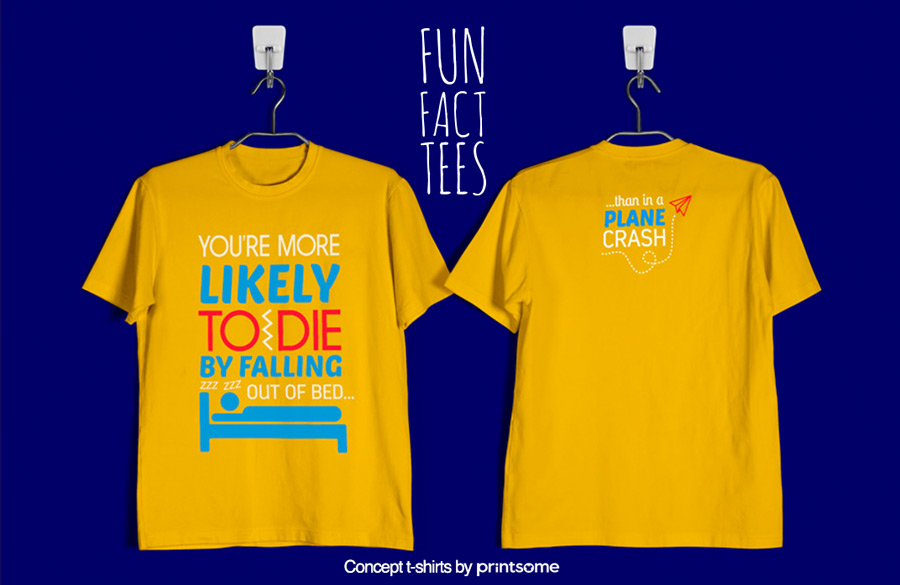 The iPod was rejected multiple times

Neither Philips nor RealNetworks liked the idea for the iPod. Tony Fadell, the creator of the technology behind the gadget, offered it to them first before going to Apple — where it has gone on to sell over 300 million units. That makes Phillips and RealNetworks the Pete Bests of electronics. 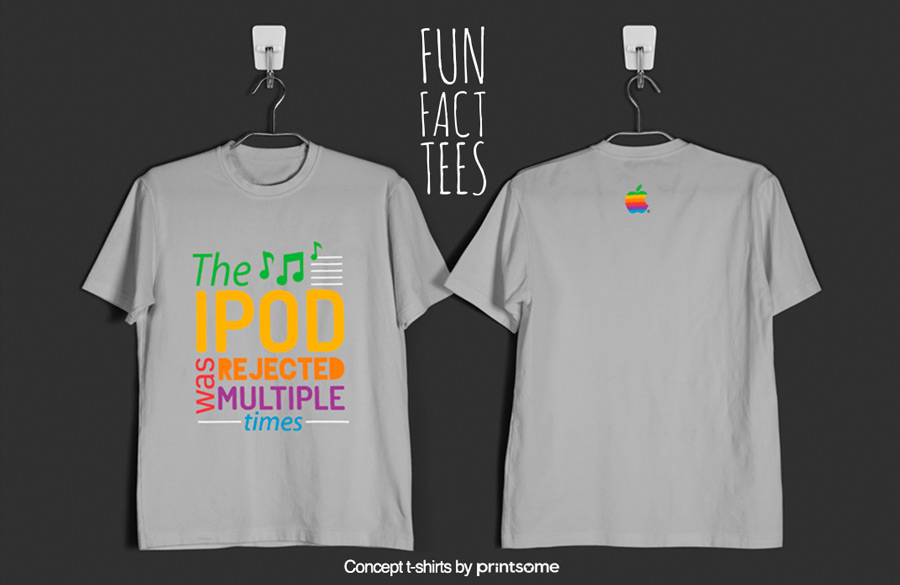 Canada has more lakes than all other countries combined

No exact number is known, but there are around 30,000 that are larger than three square kilometres. Just another thing Canada is doing right. They’ve also got the current top contender for hottest political leader (Justin Trudeau — be still my heart). And they have poutine, invented basketball, have some of the highest-ranking cities in the world for quality of life… OK, we get it Canada, you’re awesome. 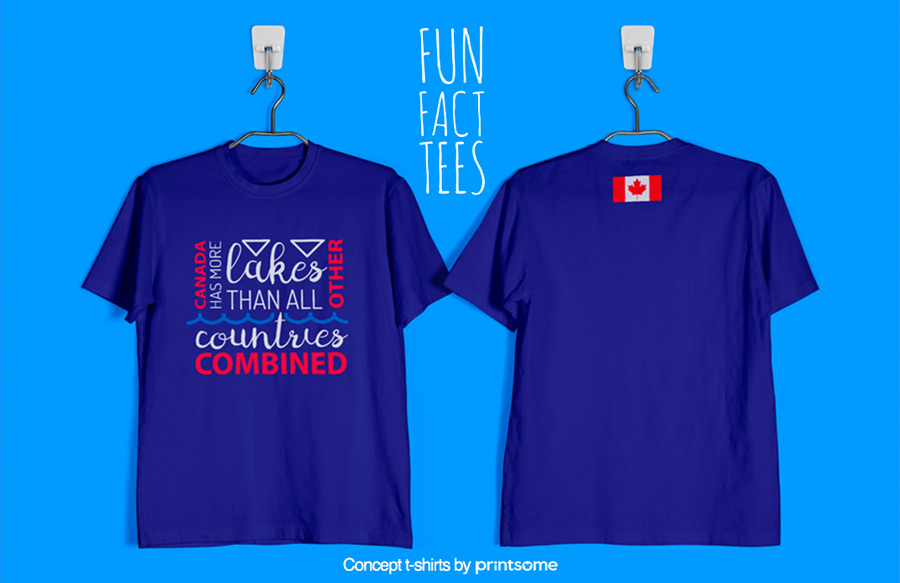 Now we have Canada’s better-known southern cousin doing what it does best: eating in excess! Still, before Canada starts feeling too up on themselves may we just remind them that they also gave the world Justin Bieber. So there. (Let’s not mention the American presidential election and just keep moving along to the next point…)

* Editor’s note: This blog post has been written by an American, so spare us your tweets… 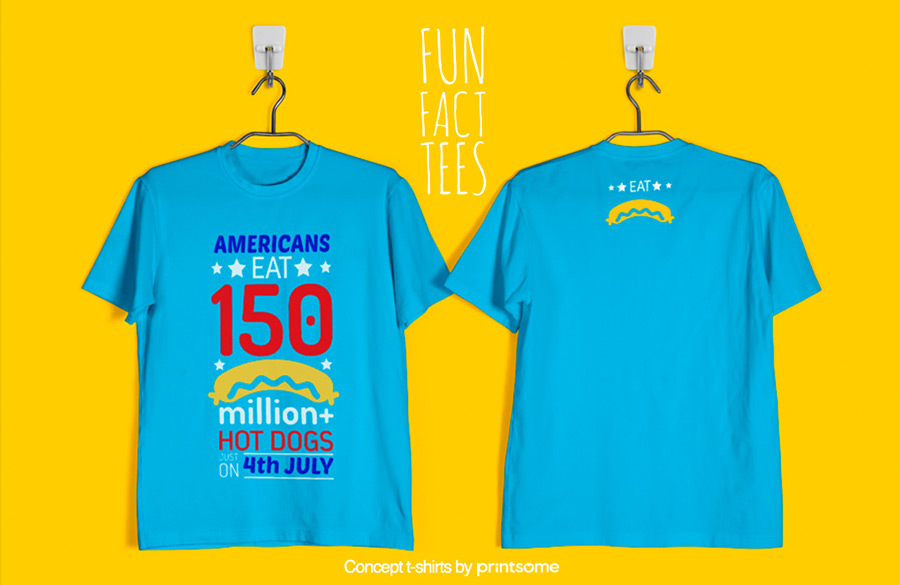 Your brain operates on 10 watts

As a point of reference, a normal light bulb is around 60 watts, though you can also find 40, 75, and 100 watt bulbs. Either way, they’re all using up a whole lot more energy than our brains.

What could my brain do if it were mega-powered with 75 watts? As I’m only running on 10, I can’t spare the brainpower to think of anything. 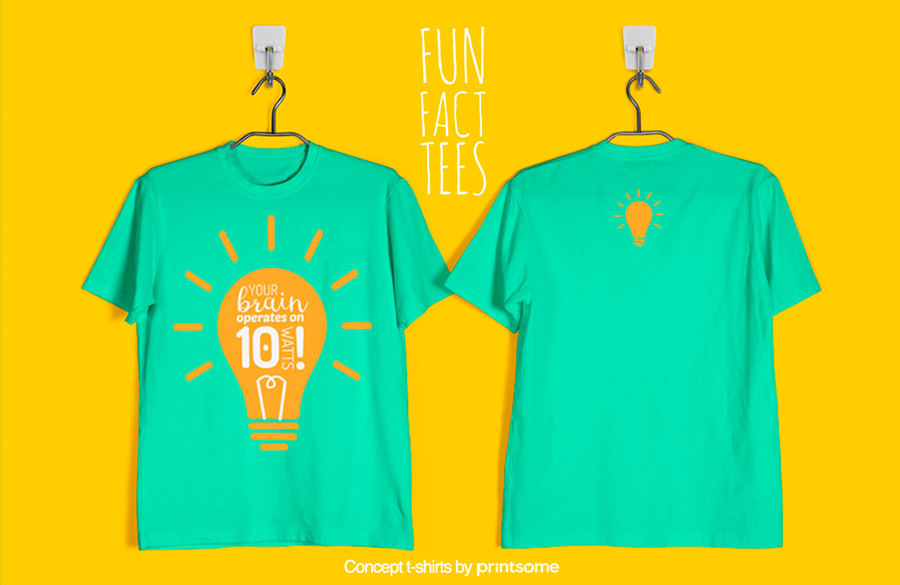 It turns out even pretending to be dead won’t get you out of a mobile phone bill. A guy by the name of Corey Taylor came up with a rather extreme solution when Verizon Wireless said they’d charge him $175 to cancel his contract — faking his own death and having a friend send in the death certificate.

He was found out, and still had to pay, although he thinks he sent “a definite message.” We think Verizon sent a more definite one. 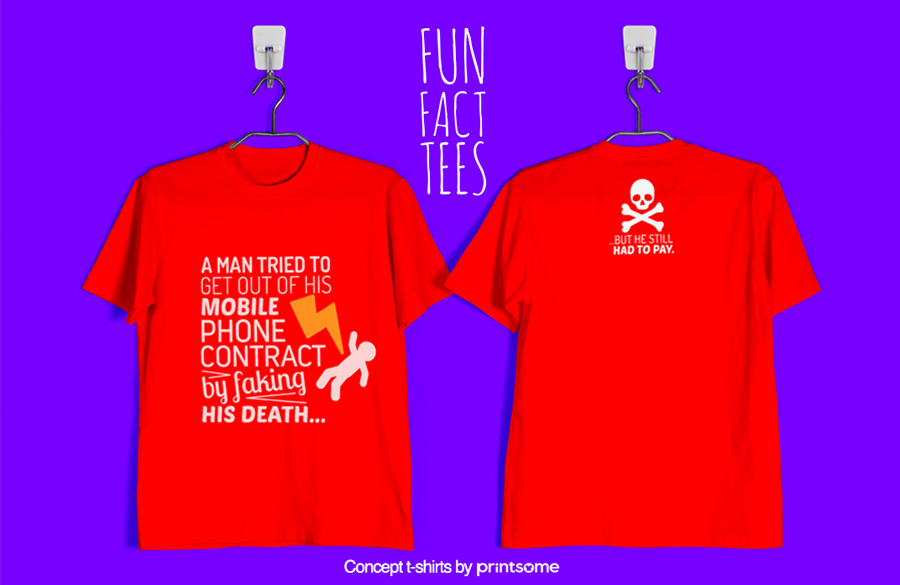 The colossus penguin was as tall as basketball player LeBron James

LeBron’s six foot eight, just in case you were wondering. The penguin lived around 40 million years ago and was twice the size of today’s Emperor penguins. While we’re sure it was very cute, we’re willing to be it couldn’t jump nearly as high as the basketball player.

Things were just a tad different back then. If you were swimming in the Arctic sea, you’d find yourself doing laps alongside crocodiles. A walk in Antarctica would be a pleasant stroll through pine trees, and if you were in the American Midwest you’d see plenty of palm trees. 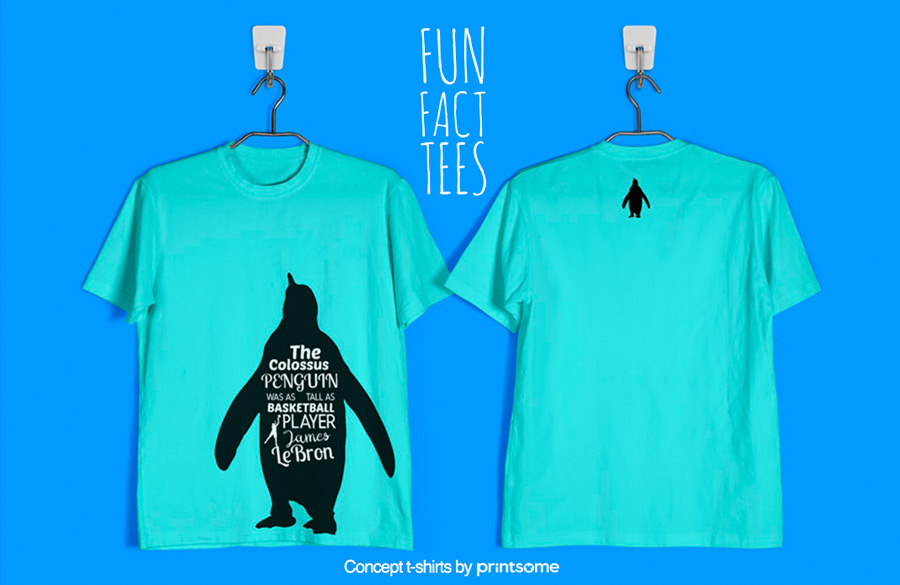 15,000+ people in the Czech Republic claim their religion as “Jedi”

Or, more specifically, “Knights of the Jedi.” This is from a 2011 census in the country, though people in Australia, New Zealand and Canada have also claimed to be Jedis. Gentle form of religious protest or hardcore Star Wars devotees? The answer, we do not have. 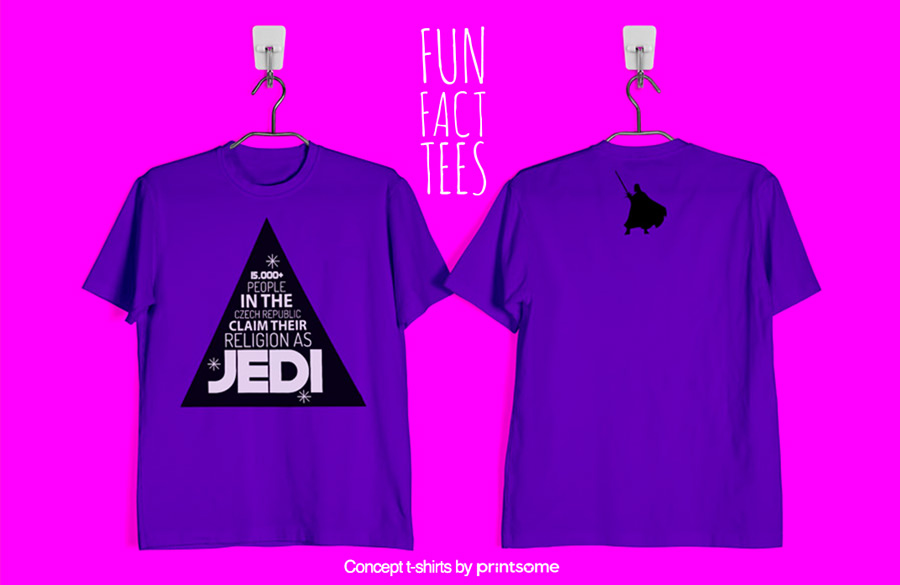 If you could scale up spider silk to be 2 inches thick, scientists think it could stop a Boeing 747 airplane. Let’s just hope there’s not a giant spider waiting to eat the plane afterwards. 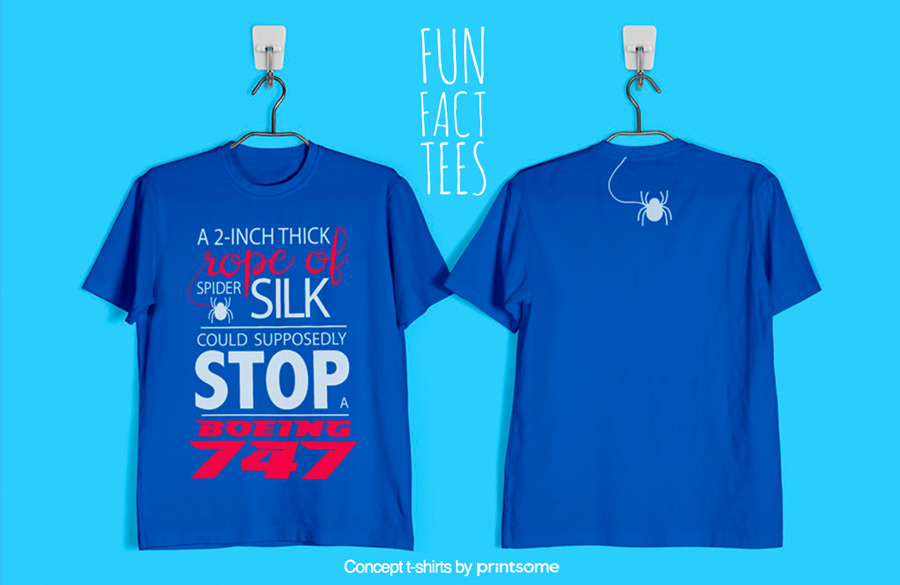 So don’t get too carried away with that facial hair, hipsters. 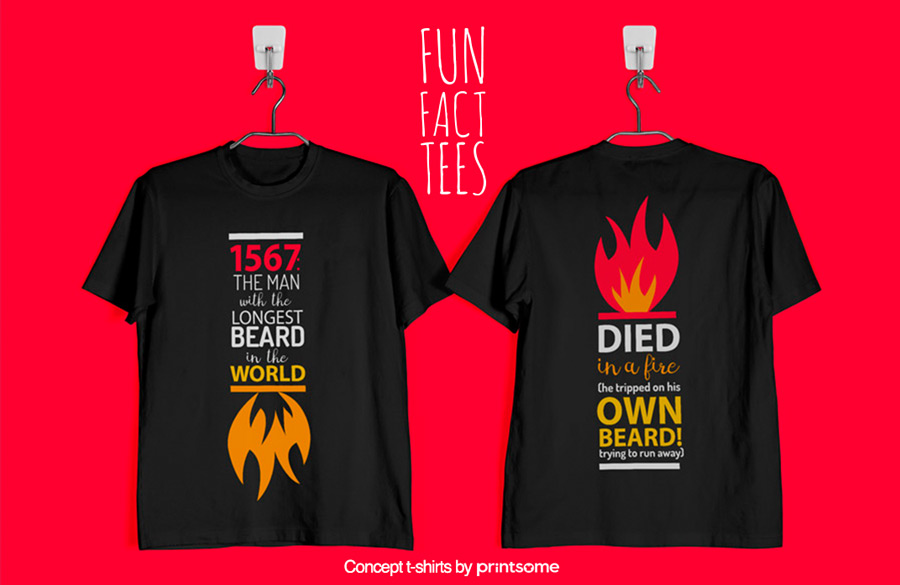 Printsome is a creative t-shirt printing agency delivering across the UK, personalising t-shirts from London to Edinburgh and everywhere in between. For a quick chat about hoodie printing ideas, just get in touch!