15 Halloween marketing campaigns that will blow your mind

In 2016, Americans are expected to spend a whooping $8.4 billion on Halloween. Yes, as in billions with a B. (I only wish they did it on T-shirts).

This might come as a shock to some of us, but it is no news for corporations.Brands spend millions of dollars every year on Halloween inspired marketing campaigns. Like Christmas and the Super Bowl, the spooky season is a special time for marketers where they get a creative license to do something they normally wouldn’t do – which is great for us because usually, that means that we get to see some really cool advertising this time of the year.

With that in mind (and as marketing lovers that we are) we’ve gathered 15 of the best Halloween inspired ads of all time.

Guys dressed up as scary monsters leaping out at unsuspecting people – yep, that’s a classic Halloween prank. Ford took it to the next level with this car wash stunt. People were given money to take their car for a free car wash at a local place. Once they were in the car wash, the lights were cut and weird things started happening.

The ad went viral pretty much right away, which was helped by the coverage it got by major media outlets like Mashable and Adweek. It wasn’t an expensive stunt to set up compared to some of the other ones on this list, but that doesn’t mean it was any less effective.

The cutest: The Oreo Laboratorium

So you know how we mentioned that $2.6 billion candy sales figure? It’s no wonder that candy brands put lots of effort into their Halloween campaigns so they can get as much of that sweet sum as possible. Oreo launched an Oreo Laboratorium campaign, which consisted of short viral videos about a lab that would transform Oreo biscuits into monsters.

The company then asked fans to come up with names for the creatures. Then, they rewarded the best ones, making the campaign a good example of UGC (user generated content). Extra points for the stop-motion animation and cuteness!

Note: Need costume ideas? Worry not, we got you covered.

Pizza chain restaurant Little Caesars released a website that forbid you from entering your physical address. If you try, you get a voice pleading you not to do it.

After ignoring the voice, you’ll get taken to Google Maps, where you an image of your housing being haunted by cartoon ghosts shows up – along with instructions to “Find out how to unhaunt”. Clicking on those gives you driving instructions to your nearest Little Caesars. Clever, no? 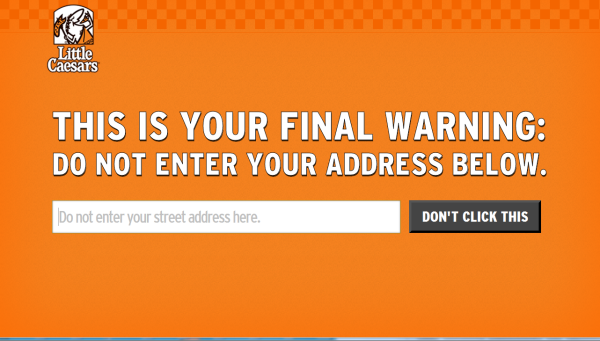 The most interactive: Creepy Shadows

Guinness is known for their quality marketing and they almost always have a special treat for their fans for Halloween. These shadow-shaped coasters might not be the most attention-grabbing of their Halloween campaigns, but they were simple and creative. The final effect was really cool, too! 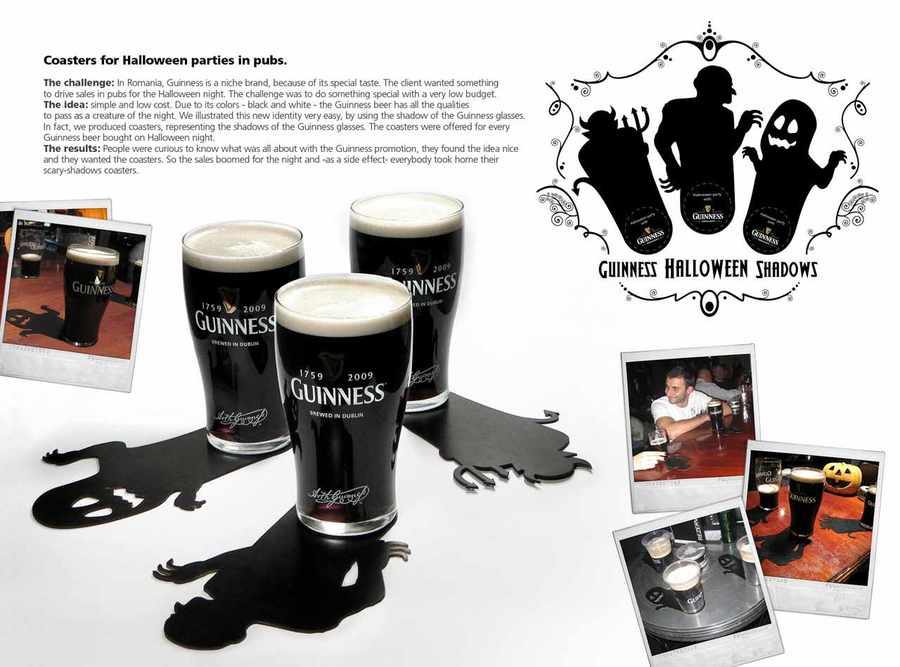 The most original: Horseless Headman

Snickers has got the Halloween game down. They’ve released several Halloween campaigns throughout the years and they’re all top-notch. Have you seen their exorcist one? What about the old lady at the supermarket? Or maybe the man on the ladder? Those are a few of their most successful campaigns, so we’re sure you’ll have seen at least one of them!

But their most famous one of all is the Horseless Headsman, a silly play on words that was unsurprisingly a huge hit. We bet it’s inspired more than a few Halloween costumes, too!

[content_band bg_color=”#E8F6D2″ border=”all”] [container]By the way, do you need T-shirts for a Halloween campaign? ? Printsome’s apparel-printing services are perfect for making souvenirs, merchandise and staff uniforms, among many other possibilities. Visit our website to find out more.[/container] [/content_band]

The sexiest: Save your Skin

Making use of classic slasher movie tropes like the faceless assassin and the hot girl in the shower, this Lux commercial takes you for a fun ride through some major Halloween clichés. But watch out for the twist ending!

A few years ago, ASDA and Amazon were selling “Mental Patient” costumes for Halloween. Unsurprisingly, quite a lot of people found these costumes offensive. (Side note: why are there always so many companies that insist on putting out incredibly tasteless costumes?) 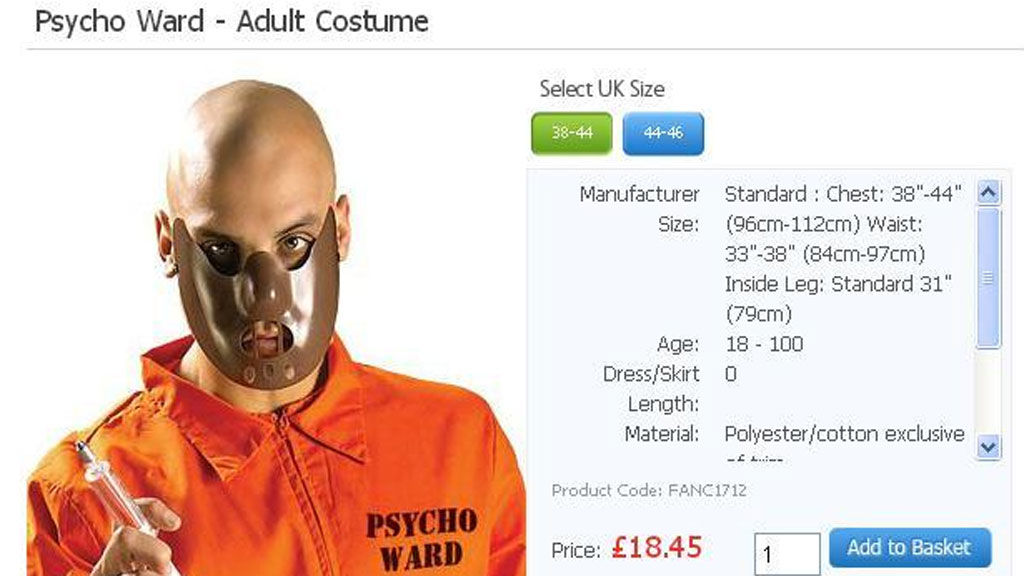 In response, the programme Time to Change released a social media campaign asking users to upload pictures of what a real mental patient looked like with the hashtag #MentalPatient. The campaign gained such momentum that ASDA was forced to pull the costume from its stores. Take that!

The most delicious: Chipotle’s Boo-ritos

Chipotle gives hungry customers a tasty treat on Halloween with its Boorito campaign. It varies a bit from year to year, but the main message is that they can getan extra-low price on burritos, tacos, bowls, and salads. One year, they released a video encouraging customers to not only dress up but to add something extra and unnecessary to their costumes. Why? To draw attention to the additives most fast food chains put in their food.

That’s not delicious, but getting a nearly-free burrito certainly is!

Of the entire list, this ad might be the most surprising. The video features a woman that’s literally scared to death by a group of zombies. After she has a heart attack, she’s CPRd back to life by one of her attackers – only to be eaten alive.

Grim, but the twist ending isn’t the biggest surprise here. No, the biggest surprise is that this video was produced by the Canadian Heart and Stroke Foundation, who usually have quite a different tone. But the change in tone worked for them, as the video has racked up over 1,600,000 views.

The most “we did warn you”: Rice Krispies Scare

Brands get pretty creative with vending machines, but Rice Krispies combined two trends into one by having a Halloween-themed vending machine. The machines had the hashtag #ScaresVendor written on them, and had signage promising people “free Rice Krispie scares.”

To get the scares, you had to put your hand inside the machine…where there was a hidden person waiting to frighten you!

[content_band bg_color=”#E8F6D2″ border=”all”] [container]By the way, do you need T-shirts for a Halloween campaign? Printsome’s apparel-printing services are perfect for making souvenirs, merchandise and staff uniforms, among many other possibilities. Visit our website to find out more.[/container] [/content_band]

The creepiest: Take this Lollipop

Back in 2011, people still cared about how much information about themselves they posted online. That’s why a little project called Take this Lollipop was released. The app was an interactive short film in which you, the user, got to star in.

All you had to do was give a Take this Lollipop access to your Facebook account. Then, your information would be displayed right in front of your eyes in a horror-movie type short film. The climax was reached when your address appeared on Google Maps and an image of the killer driving towards your location was shown.

We can only shudder to imagine what they’d do with all the information we’ve posted on our Facebooks now in 2016. And Twitters. And Instagrams. And Snapchats. And…well, maybe we’ll go take another look at our privacy settings.

Taking advantage of the zombie-mania that hit in the late 2000’s, American retailer Westlake ACE Hardware released a marketing campaign starring the undead to promote their stores. The premise was about zombie “rights” and how the store catered to the demographic by selling products designed for exclusively them (re-attaching limbs tools, for example). They even offered jobs to the monsters.

The campaign spread through different media like online videos, flyers and a website. Even though it didn’t have a huge budget, it still went viral, proving that you don’t need loads of money to produce a successful marketing campaign.

The most creative: Cravendale “Hint Of”

This one makes the list for sheer creativity. Instead of going for groaning zombies or shrieking ghosts like most brands, Cravendale used a pink cow. Scary? Not so much. Creative? Definitely! This follows the classic rule that sometimes the best way to stand out from the pack is to do exactly the opposite of everyone else.

If you’ve seen this video, you almost definitely remember it. LG installed a grid of monitors inside an elevator on the floor. People got in, and as soon as the elevator started moving, the monitors appeared to show the floor falling away beneath their feet.

No zombies, no blood and guts, and no cheesy things leaping out. This was pure terror at its simplest. And it also did a great job of showing people that LG’s claim of selling monitors with “lifelike colours” was 100% true!

We’ll give this one the award for best product demo ever.

The most real-life scary: AirBnb

The LG prank was amazing, but in the end it really was just a prank. AirBnb, on the other hand, offered people the chance to have a truly terrifying experience: a night in the Parisian Catacombs, an underground ossuary that holds the remains of more than six million departed souls. The listing on AirBnb described it as a “sprawling maze littered with skulls and bones.”

People who wanted to spend the night amongst the dead had to send in an entry explaining why they were brave enough to do it. Two (lucky?) winners were chosen, and got to sleep amongst the dead with an underground private concert and an “unusual culinary experience.”

So to finalise the article, we are sharing with you this cool infographic from the folks at TheShelf. If you are planning to run a Halloween Campaign for your brand, make sure you check out this awesome graphic!

Courtesy of: The Shelf