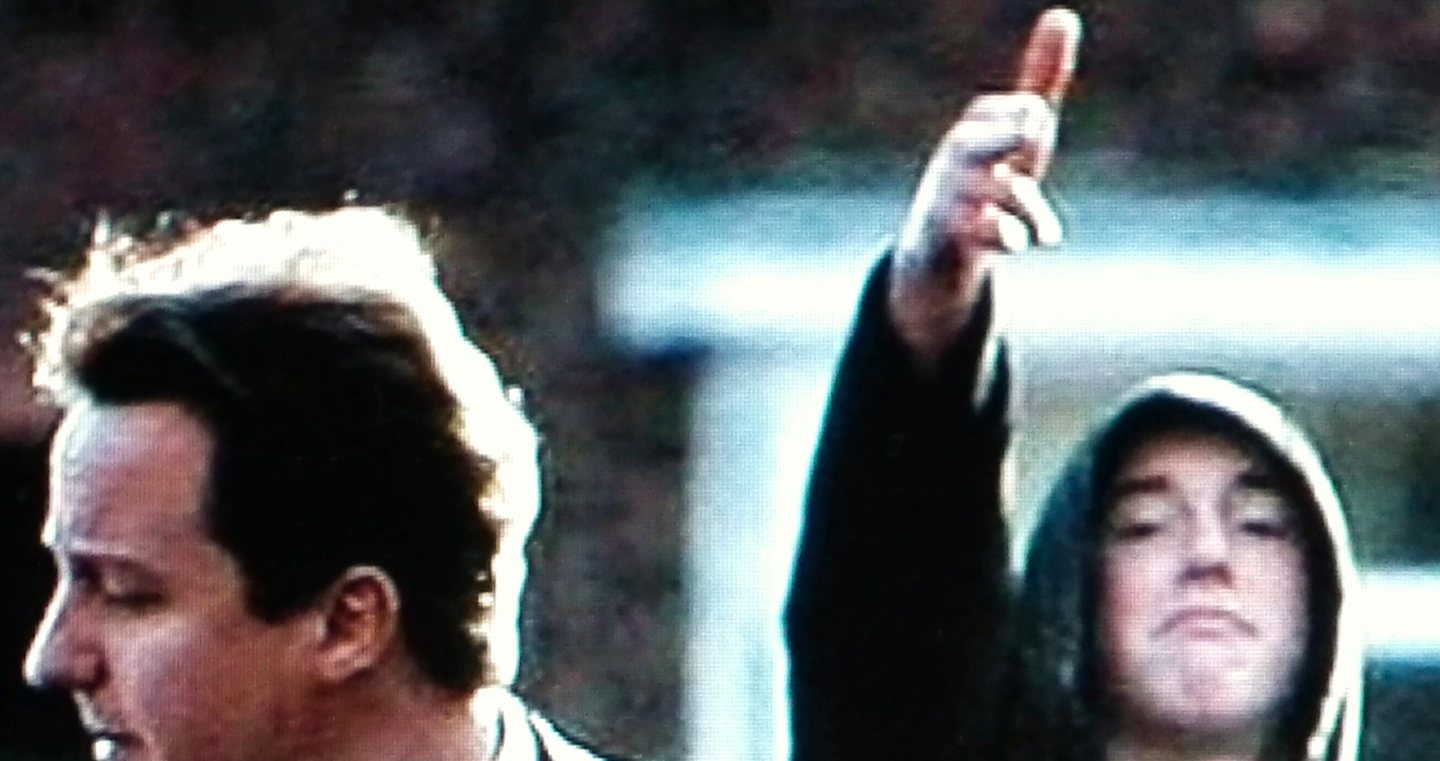 History of the hoodie – from the streets to the runways

A decade ago, a man wearing a suit got photographed walking in front of a young guy wearing a custom hoodie and pretending to shoot the first.

The picture wouldn’t have gathered so much media attention if the suited man in question hadn’t been former Prime Minister David Cameron and if he hadn’t just made a speech about how we shouldn’t be afraid of teenagers who wear hoodies. A strong foretelling of what was about to happen a decade later if you think about it.

Flash forward to 2017, at a time when teenagers wait for hours in front of the Supreme shop in London for a chance to spend hundreds of pounds on a branded hoodie. On one hand, we have a group that fears them, while on the other, there are those who see the garment as a status symbol.

Why is that? What is it about the hoodie that’s got such a polarising reputation? In order to get an answer, we have to take a look at its history.

The origin of the hoodie can be traced all the way back to the 12th century but in order not to write an encyclopedia, we’ve decided to fast-forward to the ’30s when the contemporary hoodie was first seen.

The very first hoodie was credited to the brand Champion, although back then it was called ‘Champion Knitting Mills Inc’ and was run by the brothers Abraham and William Feinbloom in Rochester, US. The first thing that must be noted is that its first function wasn’t performance, but protection instead.

It all started when they were trying to create a sweatshirt that would prevent the heat from escaping, which is why they created elastic cuffs and lower hems — characteristics that most hoodies maintain to this day. An added protection for the head was just the next logical step.

According to writer Gary Warnett, the first hoodies didn’t look like the ones we know today. Some of these garments were designed to be worn on top of the shoulder pads American football players wear. The hoodie was designed to keep athletes warm before and after training, not during — which is why it was also known as the ‘sideline’ garment because it was mostly worn by players who were on the bench.

‘The people that wore them were all people who were sort of looked up to, in the context of the street.’

The birth of hip hop

Far smarter books and documentaries than anything I could ever accomplish here have tackled the subject. So I’m not even going to try to pretend that I can shed any new light on it but I will state that hip-hop has been one of the most influential musical genres from the last century. Let’s just say that brands like Adidas wouldn’t be where they are today if it hadn’t been for the help of artists like Run-DMC and Bob Marley.

The Bronx was where it was at. Break-dancers, rappers and street artists where the leaders of the movement and they added the hoodie to their uniform. Graffiti artist Eric ‘Deal’ Felisbret was quoted by Rolling Stone saying, ‘The people that wore them were all people who were sort of looked up to, in the context of the street.’

Have you ever thought about the relationship between hip-hop and sportswear? It is not by chance. According to Kevin Braddock for The Guardian, hip-hop artists were emulating professional athletes by donning their clothes. By wearing athletic apparel, rappers hoped to channel the success and money professional athletes enjoyed.

The next level was the gangster culture. It is unclear who imitated who first but it is certain that they inspire each other. According to Angela McRobbie, professor of communications at Goldsmiths College, ‘Rap culture celebrates defiance, as it narrates the experience of social exclusion. Musically and stylistically, it projects menace and danger as well as anger and rage.’

Hoodies on the big screen

In 1976 two major films were premiered that featured hoodies The Marathon Man and Rocky. Out of the two, the latter would go on to become one of the famous movies of all time. At a first glance, it might not seem like a major event but if you’ve taken a look at our `The evolution of the T-shirt: An infographic’ then you’ll know that movies and fashion influence each other heavily and when something catches on one side it’s likely to appear very quickly on the other.

In 1982 another iconic hoodie was created with the premiere of E.T. The Extra-Terrestrial. In this case, the red hoodie wasn’t so much about sports but an allegory to fairy tales by the hand of director Steven Spielberg.

A love affair with high fashion

American brands like Ralph Lauren and Tommy Hilfiger were the early adopters of the hoodie in the US, but it was a British designer who helped introduce the garment to the European runways.

Vivienne Westwood featured hoodies in some of her collections from the early ’80s. The ones that are cited most often are ‘Buffalo Girls’ and ‘Witches’ which was a collection that was inspired by a trip of the designer to New York City.

Considering her relationship with punk, it is no wonder then that she was also a big influencer in the hoodie’s history. Vivienne Westwood was in a relationship with the Sex Pistols manager Malcolm McLaren for many years and together ran a shop called SEX which is considered as the epicentre of the punk movement in the UK.

At the beginning of the 21st century, it was Raf Simmons who captured the essence of the underground culture and translated it into his now famous Summer 2002 collection.

‘a way to stay invisible in the street. In a dangerous environment the best thing to do is keep your head down, blend in, don’t stand out.’

A bad reputation in the UK

Towards the end of the ’90s and early ’00s, the hoodie had earned a bad reputation. Let it be clear that it wasn’t unfounded; towards the end of the 20th century, it was common for shoplifters to use hoods to hide their identities from CCTV cameras. As a result, the garment was equated with petty crime and troublesome youth.

It was unfair though that some didn’t seem to distinguish a criminal from any other person who just happened to be wearing a hoodie. Such was the case of a teaching assistant in Swindon who was asked to remove her hood when entering a Tesco. She jokingly explained ‘My hair is a mess.’

In 2005, the Bluewater shopping centre in Kent got media attention for announcing that they would be banning the entry of anyone sporting a hoodie. Many were quick to point out the hypocrisy of the action after all the shops kept selling the garments — and ironically the visits to the centre went up. This was simply a consequence of the actions taken by the then PM Tony Blair who was running ‘tough love’ campaigns against the working class communities and therefore vilifying certain groups.

In retaliation, a campaign called ‘Safe the hoodie’ was launched and rapper Lady Sovereign even released a single to go along with it.

And just when everyone thought that the situation couldn’t get more ridiculous, David Cameron made a speech at the Centre for Social Justice in 2006 which went down in history as the ‘hug a hoodie’ speech. Truth be told, he never actually said those words. That phrase was taken from a letter sent by Labour parodying the original speech. In fact, Cameron was quite rational in his delivery and simply stated ‘suits’ didn’t need to be afraid of hoodies, ‘a way to stay invisible in the street. In a dangerous environment, the best thing to do is keep your head down, blend in, don’t stand out.’

And then they took that picture. One reality brutally juxtaposed by the other. To me it only proves the point made in the Rolling Stones article cited earlier, these subcultures reject the mainstream that rejected them first — and they like it that way.

The invasion of streetwear

Fashion is a funny thing. What can we say about an industry that appropriates a culture and sells it back to its originators by double and triple the price?

Contemporary streetwear, like everything else fashion, can be found today on Instagram. The platform is where a wave of new influencers, the likes of Gully Leo, who live in London and spend hundreds if not thousands of pounds a month to look like the break dancers in the Bronx of back in the ’70s. Clothes made by brands like Vetements, Palace and Gosha Rubchinskiy who have carried on Raf Simons’ torch. The latter in particular inspired by skate culture in Russia. A group of people who could probably not afford the £120 hoodie.

Luxury brands took notice. Early this year, Louis Vuitton and Supreme – the daddy of streetwear – revealed their collaboration on a runway in Paris. These two brands joining forces is a move that wouldn’t have been considerable ten years ago, heck not even five years ago. This goes to show us that hoodies and streetwear as a whole have been upgraded from mainstream to the elite of the elite — high fashion.

The future of the hoodie