Pattie T-shirts: An imaginary fashion label inspired by the city of Hull

Back in 2013, Hull had the honour of winning the UK City of Culture 2017 award. A recognition is given “every four years to a city that demonstrates the belief in the transformational power of culture.” In order to prove they deserve the acknowledgement, the inhabitants of Hull have been putting together a year-long program of cultural activities for all to enjoy in 2017.

And we thought this would be a perfect occasion for us to use our magic design for T-shirt printing Hull.

Even though the residents of the town Formerly called Kingston Upon Hull may not feel it is the most sophisticated or cultured city, it certainly has a uniqueness to it that can’t be found anywhere else in the UK — starting with the famous Pattie Butty. It is essentially a deep-fried mashed potato saucer. Technically the delicacy can be found in Hartlepool and Liverpool as well, but as any Hull resident would argue, ‘ull is the only place where you can taste the real deal.

Aside with this simple yet amazing fried culinary treat, the city is also known for its people. Residents of ‘ull have a very distinctive accent and feel a separation between the East and West sections of town. Kingston upon Hull has also given birth to some interesting and famous characters.

In true Hull fashion, my image of these people comes along with a fresh Pattie Butty in their hand. Thus the Pattie T-shirts are born. The butty has really only been around since the 19th century and some of these important figures lived before this time, but for the sake of this blog post, let us picture them eating the delicacy anyway.

Note: We don’t sell these T-shirts. We only design them for fun. It’s a what-if scenario if you will.

Sir Hotham lived well before the era of the Pattie Butty, but his fierce and most definitely Hullian attitude leads me to believe he would have been an avid consumer of the dish. Hotham was the governor of Hull in 1642, and he famously refused to allow Charles I entry into the city. This led to the infamous Siege of Hull, which is generally considered the start of the English Civil War.

It is possible that Charles I just wanted a hot Pattie Butty and was upset that Sir Hotham wouldn’t let him inside of Hull for one. Either way, Hotham is a hero and deserves to be on this garment with his city’s favourite snack.

Note: You may also be interested in ‘Hull: Marketing opportunities in the City of Culture.’ 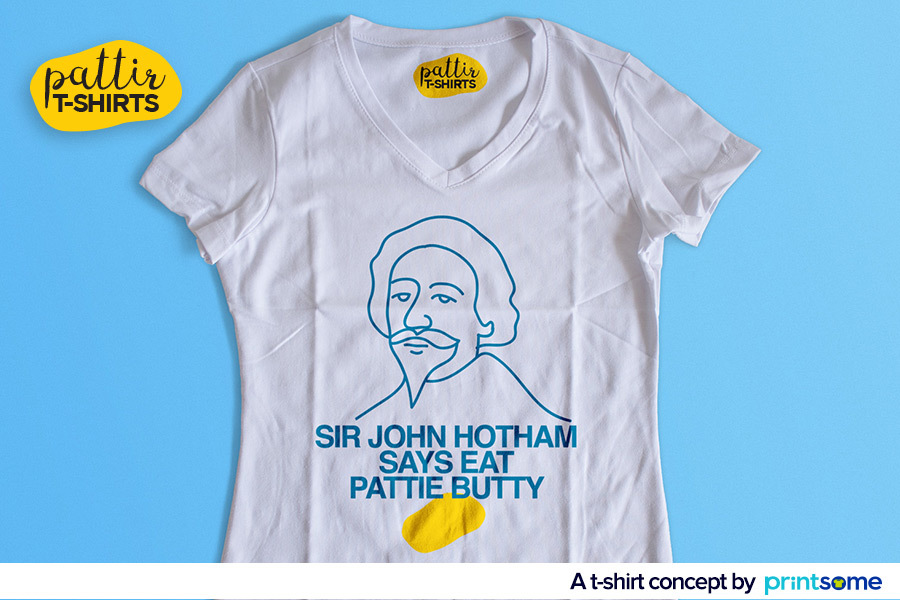 Aaron Howlett was the winner of Brittain’s biggest loser in 2005, and I am not being mean when I say that he is likely a lover of the Pattie Butty. Howlett became an inspiration for people everywhere when he turned his life around by getting into great shape during the show and then by staying fit after the program ended. He now earns a living as a successful personal trainer.

Aaron certainly deserves a nice Pattie as a reward for all his hard work, and so do you! As long as it is followed by a quick trip to the gym or a run because the Pattie is really just straight up carbs. 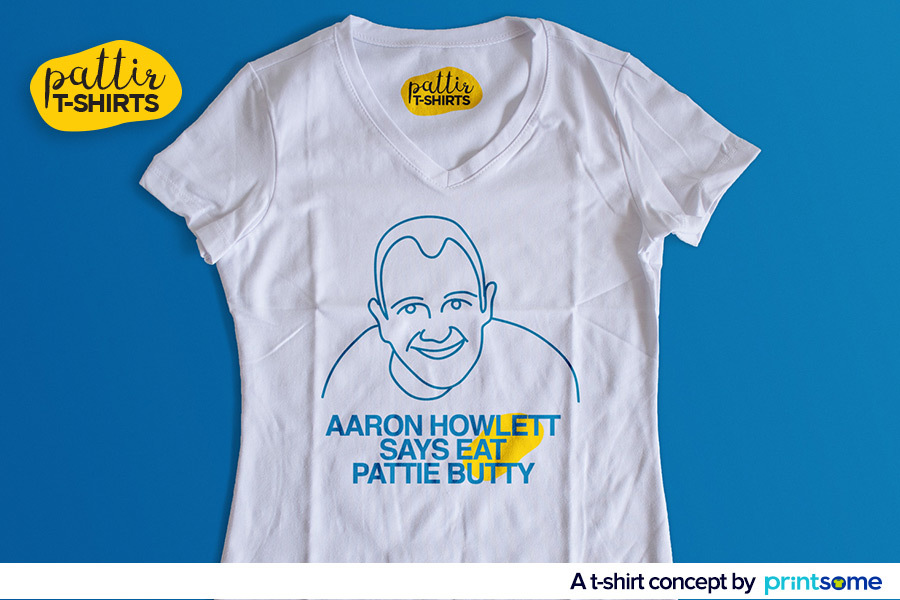 No list of people from Hull would be complete without mentioning Phillip Larkin. Larkin was a postwar author that is most known for his poetry that explored that darker sides of human nature. Some described him as sad or depressing, while others simply state that his work was a reflection of his personality: pragmatic and solitary.

Putting Larkin on a T-shirt may seem counterintuitive as he shied away from his fame when alive — we just hope he would appreciate the irony. Wouldn’t you? 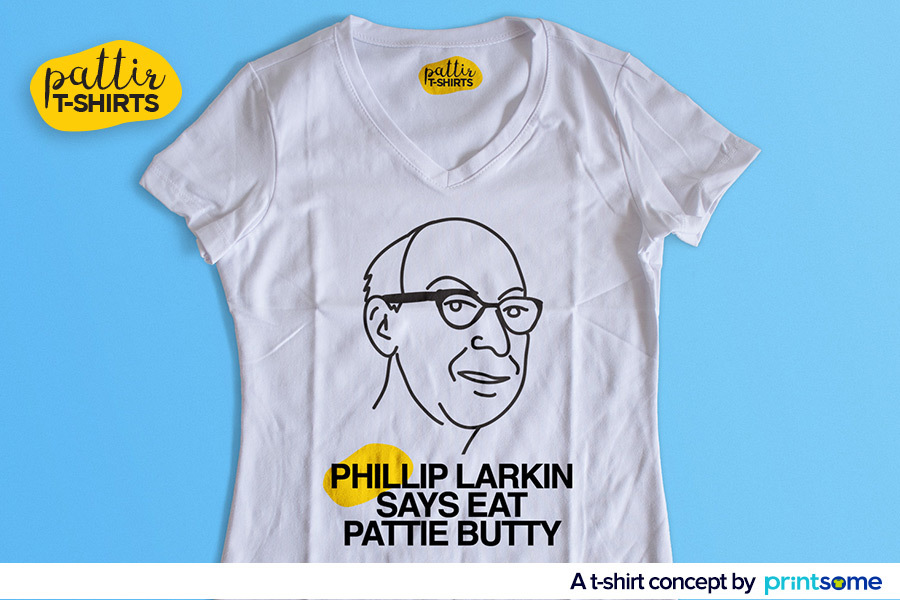 For those who weren’t aware until now, myself included, an aviatrix is a female aviator. Amy Johnson is one of the most famous aviatrices in history, and like our other celebrities and characters, she comes from the great city of Hull. Johnson became well-known for being the first woman to fly solo to Australia from the UK which in 1930 was quite the feat.

We can only imagine that since back then it took 11 days to get to the “Land Down Under”, she must have been craving a Pattie Butty by the time she got there. Her heroic return to the UK was hopefully filled with the fried treats. 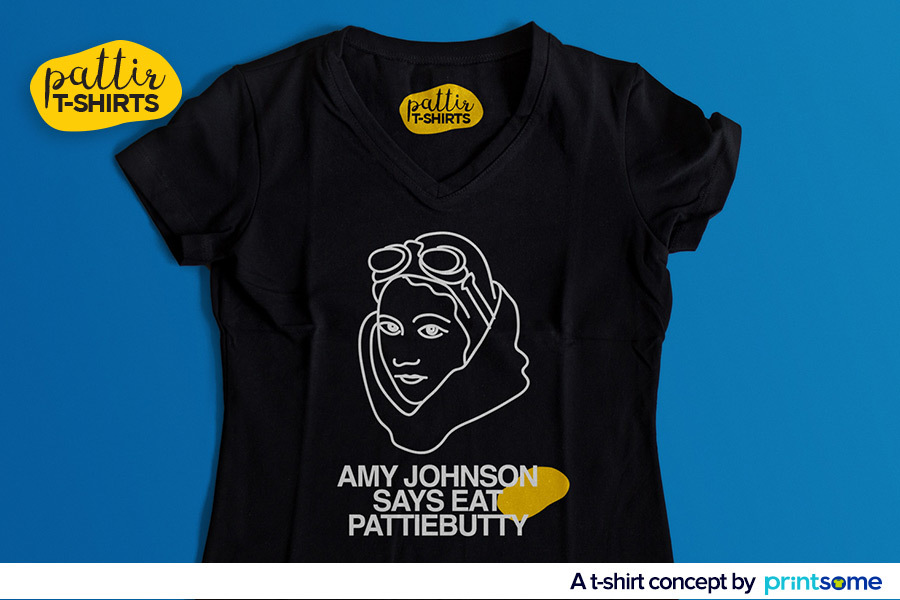 Next up on our list is a man who helped to confuse all of us in our elementary school days. John Venn was a logician, philosopher, and mathematician who developed the highly popular Venn Diagram. Drawing circles and staring at them everyday must have made him hungry, making him go for a nice circular Pattie Butty.

Note: You may also be interested in ‘A fictional label inspired by Glasgow’s architecture.’ 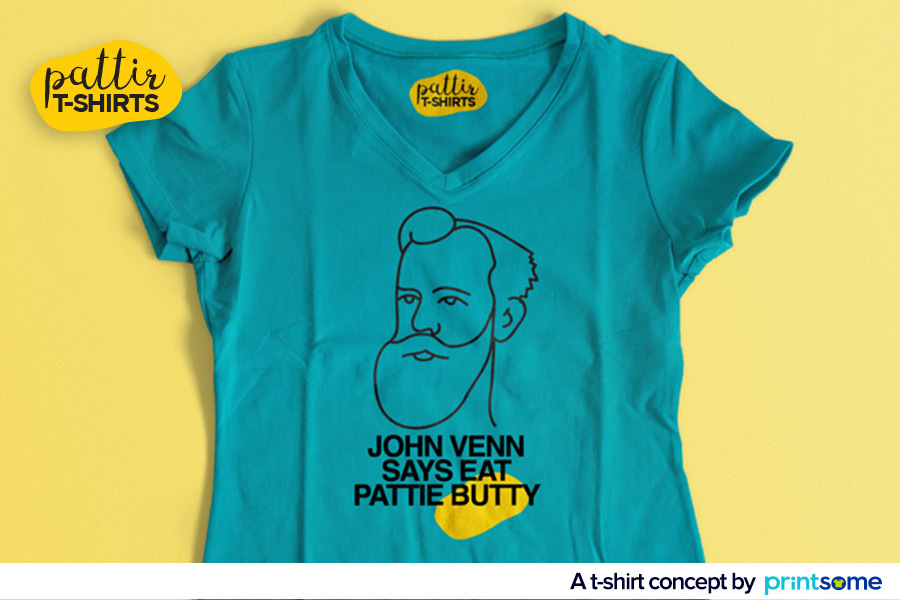 There are a surprising number of musicians that have come out of Hull. The band The Housemartins, who later became the Beautiful South, are among the many musical talents to rise from the home of the savoury patties. Mick Ronson is one of them. He played alongside David Bowie and was most famous for playing in The Spiders from Mars.

Rolling Stone magazine named him the 41st greatest guitarist of all time in 2012, so he definitely rocked. Although Ronson spent much of his time on tour, I’m sure that on the rare occasion that he was home in Hull he would have stopped off for a delicious Pattie before heading out on tour again. 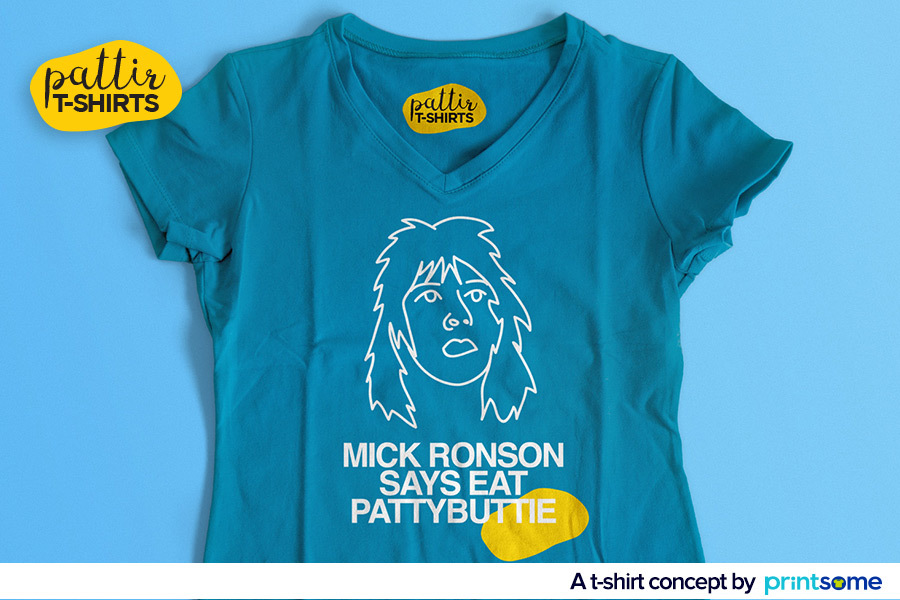 For the final T-shirt from Hull, I have chosen the famous Rugby player Clive Sullivan. Sullivan suffered injuries during his teenage years, and it seemed as if he could never play Rugby again. After later joining the army, he was forced to play in an inter-corps Rugby match because he could not let them find out about his injuries. He performed exceptionally in the match, however, and went on to play for Hull’s Rugby team. Hull F.C. Sullivan scored 250 tries in 352 games, making it a club record. Rugby is no easy game, and the exhausting sport would surely leave one tired and hungry. A pattie butty would be the perfect after-game snack, and I don’t doubt Clive had a few during his time. 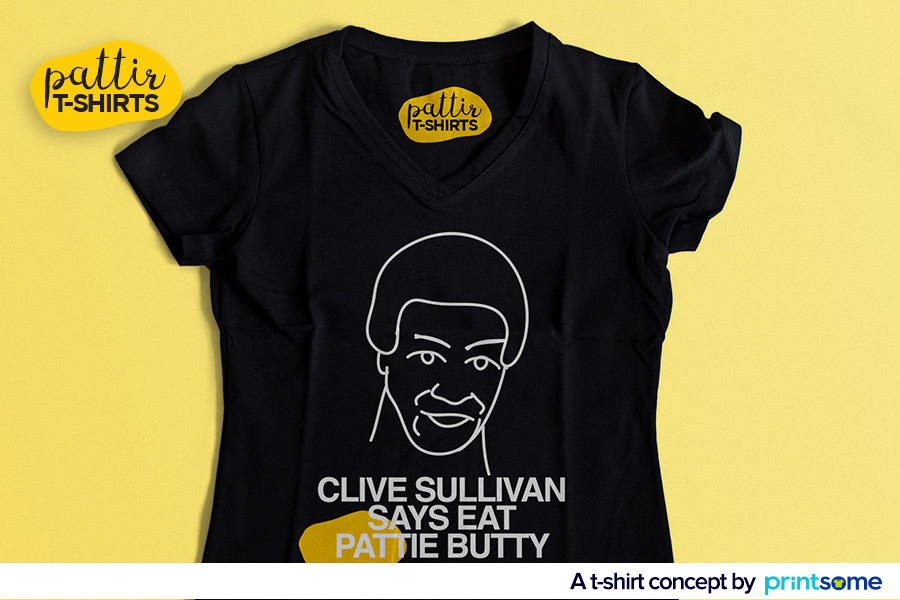 Although Hull is not the most recognised city in the UK, its diverse and fascinating culture and residents have surely left a mark in British folklore. You also are probably aching to try this Pattie Butty by now, so next time you visit Hull make sure you eat one.

Printsome focuses on quality personalised clothing in the UK, delivering custom t-shirts in Plymouth or personalised top vests in Blackpool and everywhere in between. Printing for graphic designers, brands and much more, you can contact an adviser for a chat, advice or a quote!