How to be a marketing hero: Lessons from The Avengers

London, UK: Ever wonder how a 90 minute movie gets to be more popular on Twitter and Facebook than you, a human being? Or how it attracts hoards of people and brings about a week of chaotic cinematic experiences even without an awesome marketing stunt? If you have, good job! You have noticed something MARVELlous.

The Avengers count on a few team members that not only do the job onscreen, but off as well. When they’re not fighting to save the world, they are creating buzz by TALKING, SHARING and TEASING us about the upcoming BIG FIGHT/EVENT. Chats and live discussions in the media, subtle hints of things to come, scenes from the movie; the list goes on. They even blamed Hydra earlier this year when the official trailer was leaked 6 days before it was supposed to be released!

They generate quite a build-up of anticipation, and this still only on the internet. The Avengers have a lot to teach us about how to be a marketing guru.

Then there are the oh-so-secretive and revealing bits at the end of each movie to instill an idea and captivate us, leaving us begging for more. The series on ABC, Marvels Agents of S.H.I.E.L.D., constantly references the upcoming Avenger movies as well, keeping you in the loop and filling in subtle but crucial backstories.

Then the official trailer is released, which gives only a little insight but a tonne of action. It hits over 70 million views, becomes the top-viewed video on YouTUBE and gets the world buzzing.

Marketing the Avengers is a playful, continuous battle that keeps you coming back for more.

So let’s get to the point. What are the creative marketing lessons that we can take away from the experience of the Avengers franchise?

It’s really quite ingenious. And simple:

The movie series timeline begins way back in 1941 when Captain America was dubbed the first Avenger. The movies themselves began with Marvel’s 2008 Iron Man (although some will point to The Incredible Hulk’s end credit scene with Stark talking to the general), wherein the post-credit scene pointed to The Avengers initiative. Each subsequent movie is interwoven with the past and future releases. Iron Man 2 hints at the Avengers and Thor, then Thor hints at Captain America, who in turn finishes up his first film by coming into contact with Nick Fury of SHIELD.

At this point we’ve met all the superheroes, and you should be able to see the pattern – each story is very neatly woven into the next character’s storyline, finally leading us to…

The Avengers. Fury brings all the heroes together and Thor just sort of invites himself to the party. They make magic happen, and the end credits show us an exhausted team. Really, they could’ve called it quits there.

Each year brought one or two more films to the Marvel movie universe. Iron Man 3, Thor: The Dark World, The Winter Soldier, even Guardians of the Galaxy. Each movie had an end credit scene linking it to one or more of the other storylines.

Then it all culminated once more in The Avengers: Age of Ultron, which gave us the ultimate showdown.

Marketers take note: action-filled, more extreme fighting scenes, more friction and drama between characters and an offbeat romance story on the side. Everything that had happened up to this point led to this fight. Our heroes, their minds, their actions: each is a self-contained story unto himself.
And in order to keep the viewers curious and anticipating the next movie you have to end with more than just a “to be continued”: cue the end credits scene.

The marketing lesson: there’s a build-up of events, a recurring idea and each component (character) is supported by the others. It all finally leads to the main event. To simplify even more, we can say: by linking each event whilst maintaining an idea, we’ll always attract a bigger crowd. Give them what they want, but dangle hints that there’s more to come.

Note: You may also enjoy reading ‘5 marketing lessons you can learn from a dinosaur theme park.’

In the movies we get to see a lot of each character’s personality. We enjoy Tony’s cheekiness, Thor’s different worldview, Natasha’s witty comments, etc. They’re fictional characters, yet we can still relate to them on a variety of subjects. Especially in Age of Ultron, where we see more ‘normal human’ reactions and emotions come from these characters.

The marketing lesson: Do some soul searching. What is your thing? What is it you are really good at? Knowing what you have to bring to the table is key. If you know your part you’ll spot the gaps and you’ll be able address them confidently. Knowing your team members’ strengths will also allow you to trust them, delegate work and make teamwork much more efficient and effective.

Also, relating to your audience is another major element. Adding a little humour or wit goes a long way to solidifying relationships. Ambush marketing can go a long way to this effect. Study your target group and relate to them on a personal level. Word of mouth is, after all, the order of the day; and don’t forget that first impressions last (keep the Hulk inside). If we look at the Avengers as individual products, then the lesson to take away is that each is well-defined and stand-alone. No expense is spared to ensure the storylines function well, and function together.

3 – The Avengers have each others’ backs

Here we have a perfect example of how each Avenger does their part to support the others. Once something is tweeted by @Avengers, it ricochets across Twitter, making contact like Captain America’s spinning shield. @Iron_Man, @CaptainAmerica, @Thormovies, @Hulk, @AgentsofShield all collaborate via tweets… you get the idea. There are endless amounts of posters, interviews, teasers, etc. on these superheroes’ feeds. All hashtagged, of course, inspiring a hashtag fan frenzy as well as long periods of comfy Twitter trending.

So why would our superheroes take their marketing to social media? According to statistics, videos and gifs get the most attention. Live and exclusive content will draw in your audience, capture their attention and create anticipation. Adding an image increases retweet rates by 150%, and the Avengers know it.

The marketing lesson: Create a network of people that can support your content, thus guiding greater flow of traffic towards your desired event. This means networking, building friendships with others in your field, and getting loyal followers who will pass on your content. 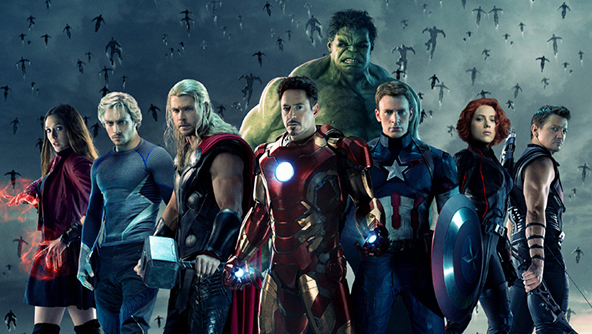 4 – The Avengers are Earth’s mightiest heroes, in more ways than one

In a recent interview with Avengers producer Kevin Feige, he mentioned “we believe the Avengers are global heroes, not just U.S heroes.”

According to Forbes, the first Avengers film ranked third-highest domestic box office gross of all time. Avengers: Age of Ultron is 2015’s highest-grossing movie at in the US and 8th on the list of the world’s all-time highest grossing films. It only took them 3 weeks to get there, too.

Ok, this is pretty impressive and may be a little intimidating. But take it as inspiration. Everyone involved in this project was committed to achieving this particular goal and they’re already working towards the next one! The Avengers crossed borders, literally. And the people of the world responded with a decent amount of ratings and movie tickets…

The marketing lesson: Think global and act local. Have a big picture in mind and be informed. In most cases, if there’s an opportunity to fill a gap in your local market, the same gap is likely there in other cities around the world. So, if you find the main hook to draw in a crowd locally, something similar will work globally. The key is to focus your attention first, and then expand.

These four marketing lessons are extremely applicable to marketing strategies no matter the field. So don’t take it with a grain of salt when we say: Avengers! Assemble!