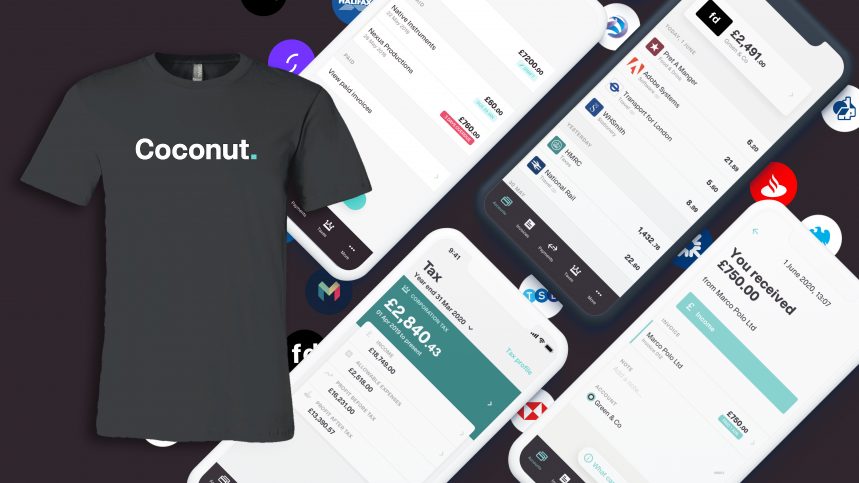 Sending a T-shirt to each of their 2,000 supporters sounded like a great idea (at first) but, taking a closer look at the technicalities, it became evident that this would be no walk in the park. Not only would Coconut have to sort out all the addresses, but also the preferences of their followers in terms of sizes and garment model.

In this case study, we’ll go over how Printsome On Demand helped Coconut reach their goal.

Coconut is a revolutionary fintech tool designed to help freelancers and self-employed people manage their finances – combining banking, accounting and tax into one simple app. The setup includes a business current account and an app that provides expense categorisation with contextual tax advice, a tax calculator so you can see how much tax you owe as you earn throughout the year, as well as a built-in invoicing tool. And there’s a growing list of features on their Product Roadmap.

The company was co-founded by Sam O’Connor (CEO) and Adam Goodall (Chief of Product), who, when working as freelancers, realised the potential a service like this could have. As a young enterprise, they were enjoying great success (3,000 accounts by November 2018) but were always looking for that extra push to realise their ambition of becoming the only tool that the self-employed need to manage their finances.

In 2018, Coconut organised a crowdfunding project to raise £500,000. To make a long story short, it was a huge success. On the second day, they had surpassed their goal with £682,000. By the end of the campaign, people had invested almost £2 million (£1,827,450). That’s 300% more than what they were initially looking to raise. They also broke the Crowdcube record for the number of individual investors with over 2,000; Testament to the strength of their relationship with the Coconut Community. Sam O’Connor was also voted Crowdcube Entrepreneur of the Year 2018.

In an official statement for Crowdfund Insider, the team said, ‘It’s been a smashing few days. We launched the private campaign on Friday evening to our customers and community and had 350 of you investing £325,000 in 24 hours. This is an incredible show of support from customers and friends, thank you.’

To show their appreciation to backers who invested £500+, Coconut decided to give them a little ‘thank you’ gift. And what better gift than a free custom-printed T-shirt?

On a Mission to Thank their Fans

The idea to thank their backers with T-shirts was a nice one but there was a problem, how were they going to ship the T-shirts to so many investors? And if they found a way to do that, what size and fit would they prefer? Could they just risk it and send the same T-shirt to everyone and hope it would fit regardless of gender and body shape?

Even if they managed to somehow get the sizes and the shipping addresses of all their backers, they would’ve had to order several hundred T-shirts without any place to store them. And if they didn’t give them all away? How would they get rid of the stock?

Suddenly, it became complicated for a simple ‘thank you’ gesture.

Why print on demand was the best solution

Coconut approached us with this conundrum and, quickly, it became obvious to us that a drop-shipping model would be the best option in this case. All they had to do was create a Shopify store and connect it to our systems with the Printsome On Demand app.

A shop created on this platform allowed them to easily gather the information they needed to know at checkout, during the order process itself; their preferred fit (for men or women), size and shipping address. This way, they didn’t have to waste time by asking their backers one by one for their details or risk disappointment by sending everyone the same garment. On top of that, there would be no need to go wholesale because each T-shirt would be printed in real-time as they were ordered.

Once the Shopify store was set up, it was only a matter of spreading the word. An email campaign was sent to give backers a 100% discount code they could use to redeem their garments. The T-shirts could still be bought if anyone who didn’t have the code wanted to, but for the investors, it had no cost.

To get the T-shirt, all you needed to do was follow the link to the store and, after choosing a size and fit, just head over to the checkout and fill the field with the promotional code. Printsome then took care of the rest, printing and shipping to the designated address.

It used to be the case that to use garments as a marketing tool, one would have to print hundreds (if not thousands) of units in advance and hope for the campaign to work. Otherwise, there would be boxes and boxes of clothes to get rid off and, not to mention, the lost investment.

As we already mentioned, with a drop shipping model, this simply doesn’t happen. Print on-demand offers a risk-free way to orchestrate a marketing campaign with T-shirts.

This business model could be described as pay-per-click or, in this case, pay-per-T-shirt as you only pay per print. Printsome On Demand doesn’t have a subscription fee or monthly payments. It only charges a fixed production rate every time a garment is sold. Which simply means that, if there are no sales, then there are no expenses. You’re always in charge of your budget.

The print on demand model has the potential to be a powerful marketing tool. It is fast and versatile which means it can adapt to most situations.

For example, if a company wants to give away T-shirts as promotional material during a trade show, it is no longer necessary to print them before the event. Now, they can just promote the garment and take note of the details of those interested in purchasing it. After the occasion, Printsome would simply print the garment and send it directly to the customer.

With Printsome On Demand, there’s flexibility and no obligation to go down a particular route.

Printsome On Demand offers ideal solutions for up-and-coming bands and artists who wish to expand their brand with custom merchandise but may not have the resources to do so. With an online shop and a drop-shipping model, merchandise can be sold via Shopify’s Point Sale. This app

allows you to sell and arrange your inventory via any table and/or smartphone. It makes it easy to sell on the road. Thanks to this invention, nobody needs to be carrying around space-taking merchandise.

Uniforms and Souvenirs for Employees

Printsome On Demand makes it easy for an HR manager to order and print T-shirts for their team. An online shop, such as the one Coconut created, saves time, and will collect all of the information necessary to make an order. This includes the number of garments, sizes and fits. And because the print is on-demand, there’s no need to make a bulk order every time someone new joins the team.