London, UK: Cocktail making is considered an art that a lot people pay good money to learn and the same thing can be said about social media. When I started thinking about the two of them, I was surprised at how many similarities I found, they both require attention to detail, people skills, being able to do several things at one – And then it hit me: what if social networks were cocktails? How cool would that be?

Here is a list of some of your favourite social media turned into drinks:

The original social network – the original cocktail. They’re both pretty much ignored by younger generations, but the couple had an impact in their respective industries that spawned a league of memorable descendants. Would there be a Facebook, twitter and Linkedin without a Myspace? Would there be a Martini without a Martinez? I don’t think so. 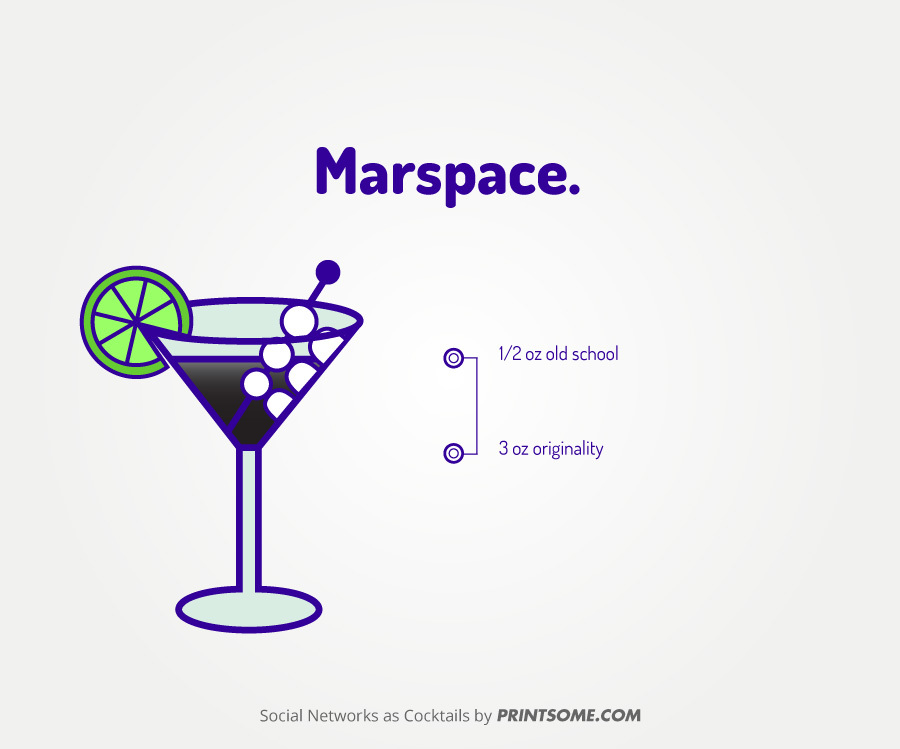 Pretty popular and everybody does it – the only problem is that if you don’t know how to prepare it, it can be a mess. It’s delicious! Don’t get me wrong. Nobody is trying to take away the tastiness from the Facejito (I’ve had a fair share of good ol’ lonely nights thanks to it), I’m just trying to say that it’s taken for granted. If you ever order a Mojito and sense a slight glare coming from the bartender, no, you’re not imagining it. The cocktail is pretty laborious to make. It takes a skilled barista to make sure mint leaves are the right size (too small and it gets stuck between your teeth – too big and you have a salad) and there’s the right balance of soda, ice and rum so it doesn’t end up tasting like a regular Fanta. On the other hand, Facebook when done incorrectly can be a migraine for both its users and developers. If you don’t pay attention to privacy policies, your employer may run into the pictures of you posing on a swimsuit at your ex’s swimming pool. Not fun. 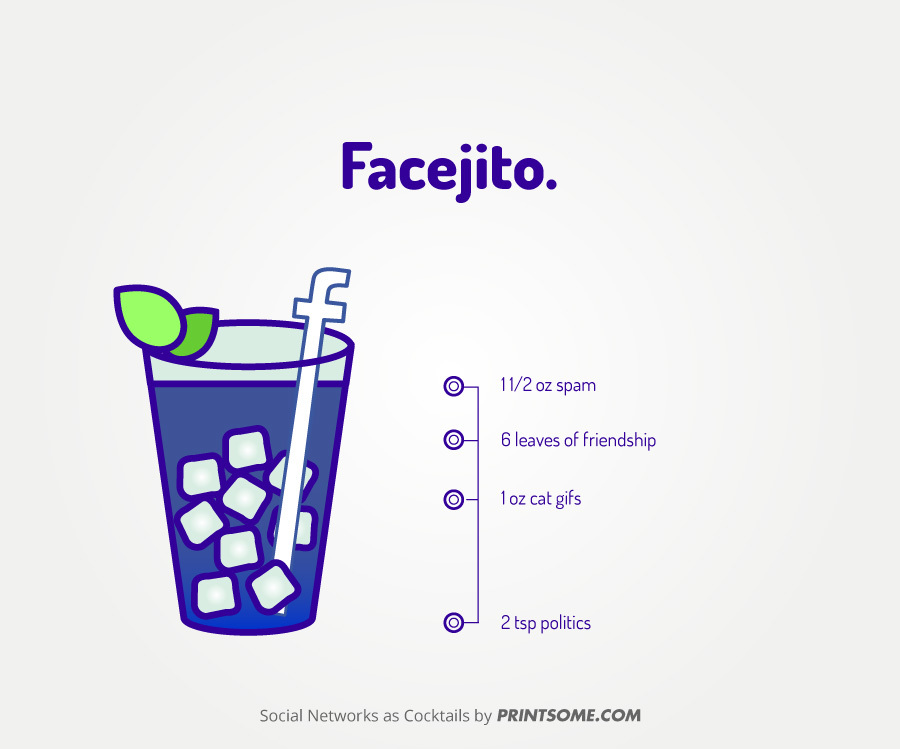 The Linkin Tonic is a drink that has become fashionable, most people respect it and everyone has tried it at least once. Then what’s the problem? Not that many people recognise it’s true value. Anyone can make a Gin Tonic, but not many people can MAKE a Gin Tonic. It takes a real spirits connoisseur to consider the botanicals in the gin, and choose the right tonic water to enhance their flavour. Same thing can be said about Linkedin. Did you know that nowadays the social network is responsible for 50% of hiring in the US? Linkedin is a very powerful tool for networking and getting jobs, but most people just open a profile and let it rot, without knowing its true power. 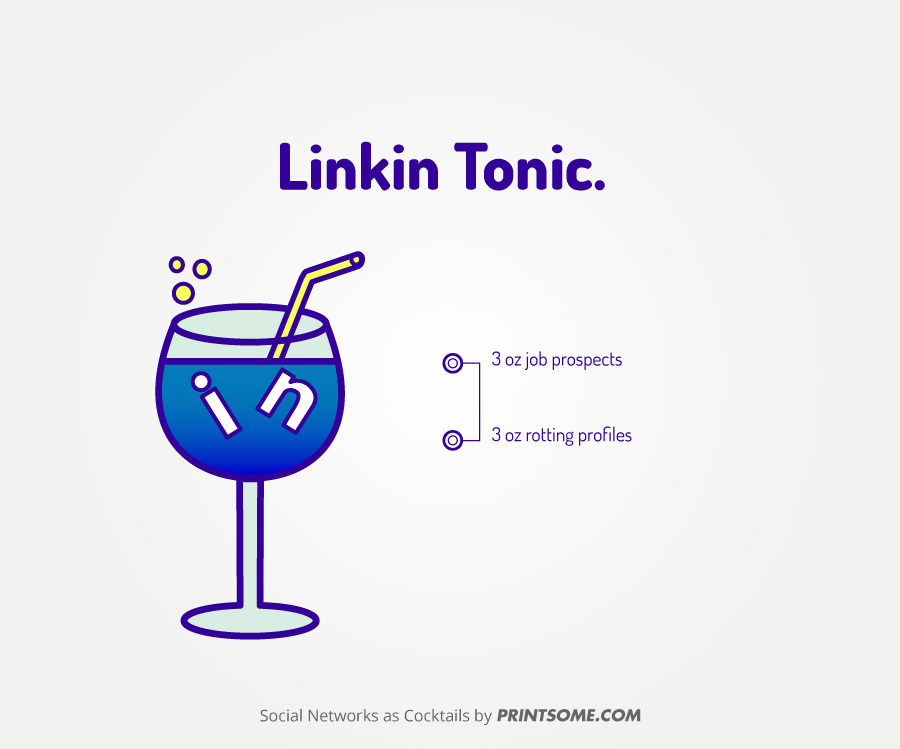 A beverage with a reputation for being a girl’s drink and a “fad” – therefore not a real cocktail. While it’s true that the people who order it are mostly women, the potential of the Cosmopin shouldn’t be underestimated by neither gender. 83% of Pinterest users are female, making it an obvious target for brands with a large female audience. The network receives a solid 10 million US unique visits a month and is known for driving online sales. On the other hand the Cosmopolitan is a cocktail that became famous thanks to a little tv show called Sex & The City, maybe you’ve heard of it. Thanks to its popularity among women, many men ran away from it thinking it was a “fruity” drink, but it is in fact the best Vodka Sour around. 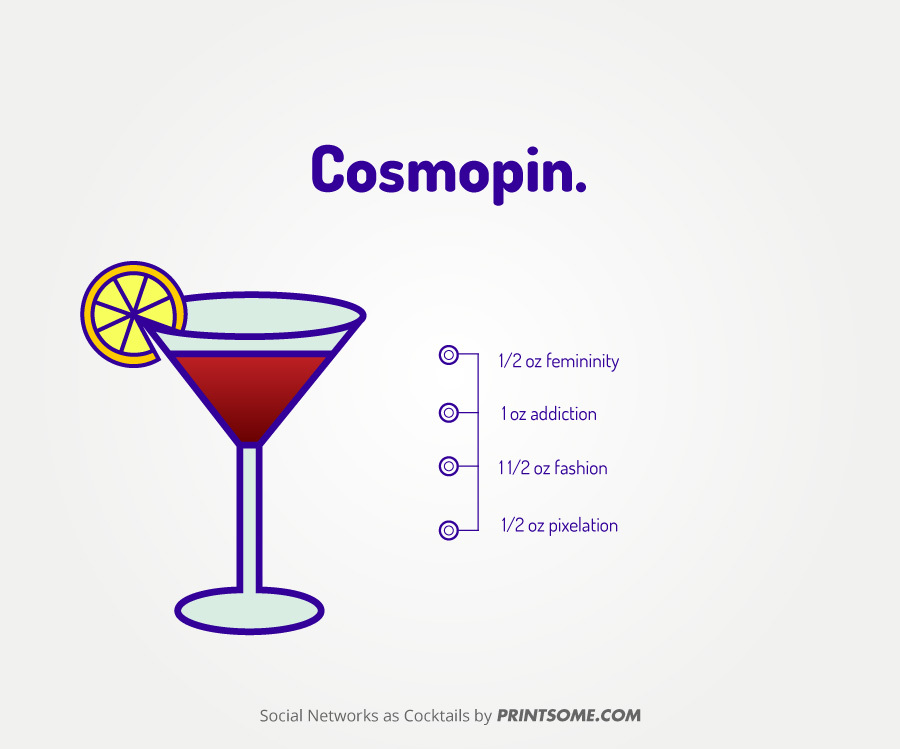 It’s nice to look at, but is there more to it? The Bloody Mary and Instagram tend to be tossed aside by their critics as “ just pretty” without considering that they’re so much more than a good-looking carcass. Instagram has got more or less 300 million users that upload around 70 million photos per day! And its per-follower engagement rate is 58 times higher than on Facebook and 120 times higher than on Twitter. Basically speaking, it is not just a “pictures app”. Bloody Mary gets the disapproval from some cocktail snobs for being a “highball” (drinks made of a base spirit and a larger proportion of a non-alcoholic mixer), and it is in most cases, but when prepared well it can stand its own ground as a powerful cocktail. 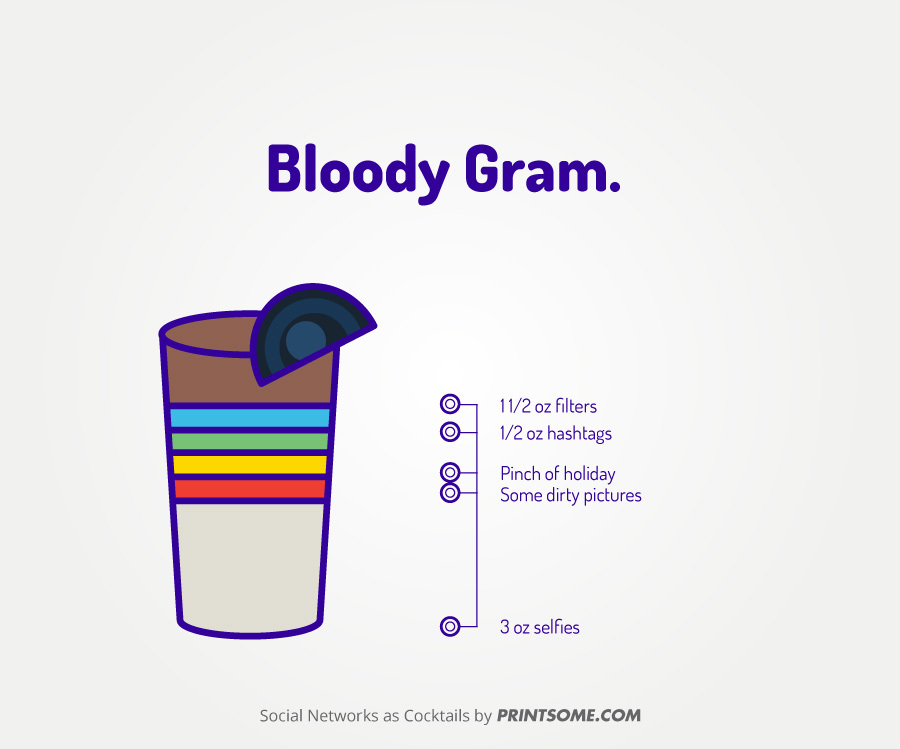 The first sips are delicious and the more you drink, the more inhibitions you lose, but the next morning, you regret most of your life decisions. Tumblr is known as the “black sheep” of the social media family. While it does present some impressive stats, the social media is known for broken interfaces, trolls and porn. It does feature darker and “more underground” content than its cousins, which makes it a powerful tool when reaching a niche audience. As for the Long Island Iced Tea, well, it’s mostly considered an outsider because it’s the cocktail people order when they want to get f*** up. 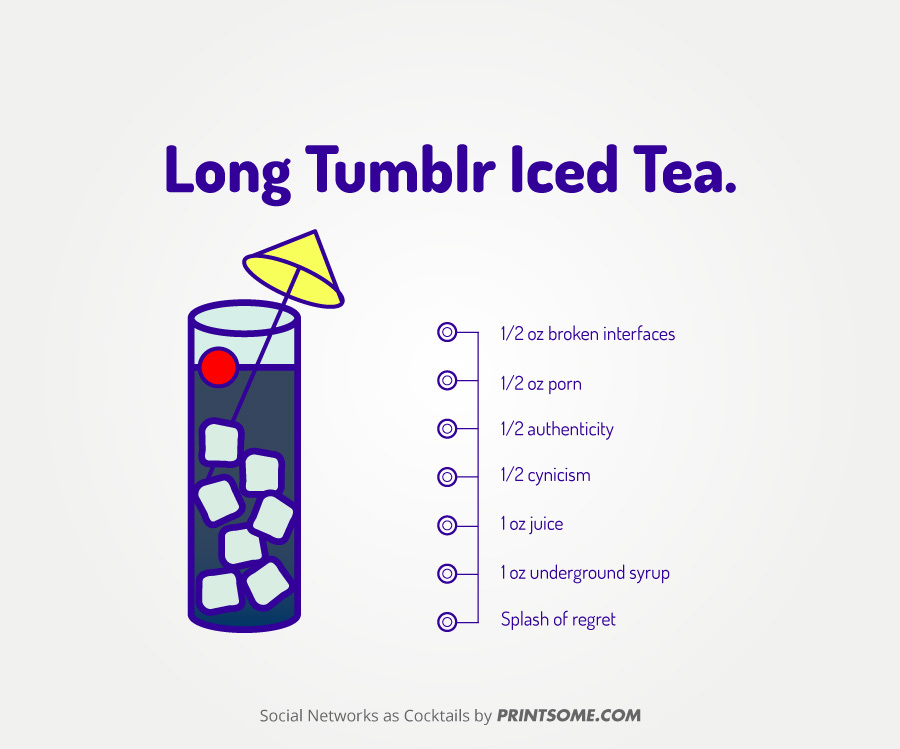 A cocktail that’s often not well prepared and it’s a shame because it tastes so much better when it is. What is Twitter? A social network or a microblogging platform? What is a Negroni? Is it bitter or sweet? They’re actually both! It takes a fine palate to understand the true value of a Negroni and the same thing can be said for Twitter. Take a look at this list of Twitter hacks to understand how flexible this tool can be. When prepared properly, the Twitteroni is a drink that tastes better with every sip. 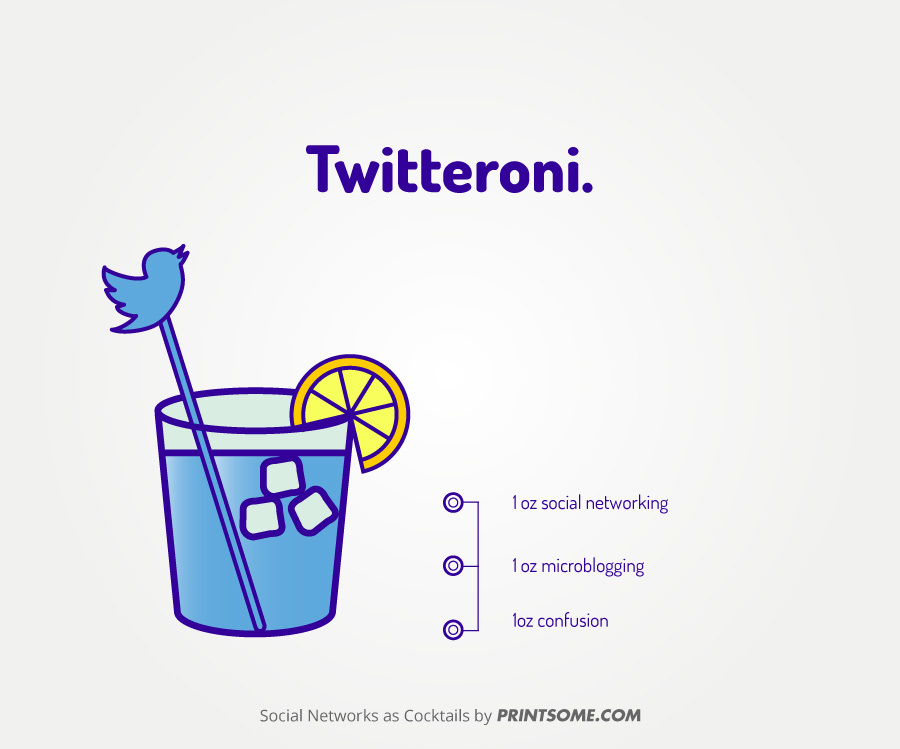 It’s tasty, it looks good and it does the trick, but is it really worth it? Google + is the social network that was supposed to take over the social media world by storm, but time has gone by since it was launched and it’s still kind of just there. Everyone has got a profile because it is automatically set up when you create a gmail or a Youtube account, but then it is just left hanging there. Brands use it for the SEO, but do they truly get the same engagement as they do on other social networks? Posts are just left there. Same thing goes for the Moscow Mule, it’s going trough a kind of revival moment right now, but is it worth the price tag? It’s just beer and vodka, mates. And the copper mug does not make it taste better. 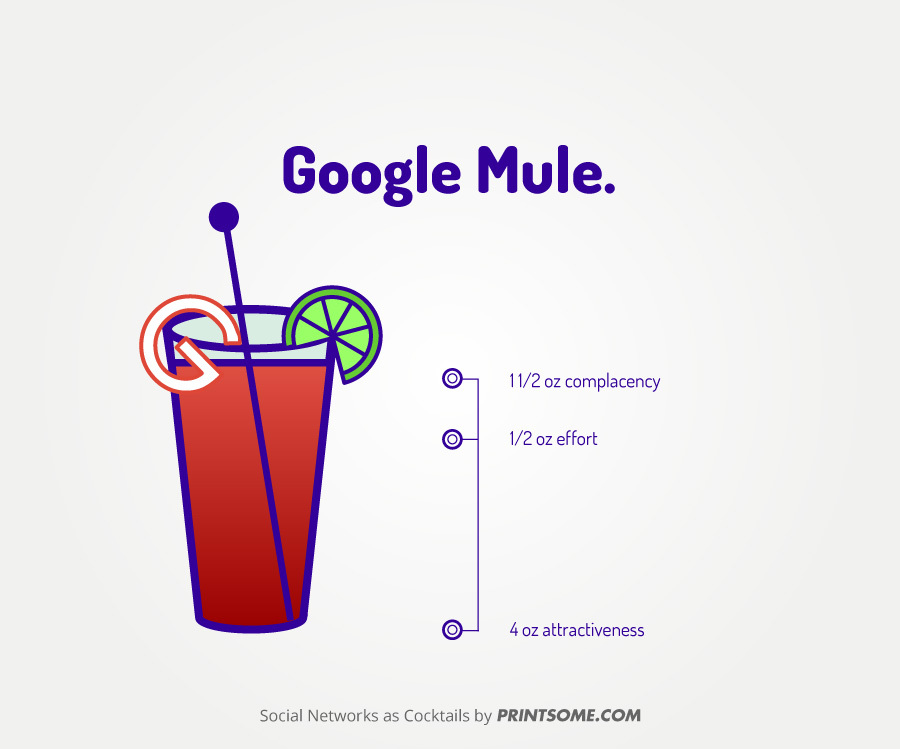 Are there any other social networks that would make a great cocktail? We would like to hear from you. Let us know in the comments below or through any of our social media networks! In the mean time, keep reading the Printsome Blog for more awesome content. 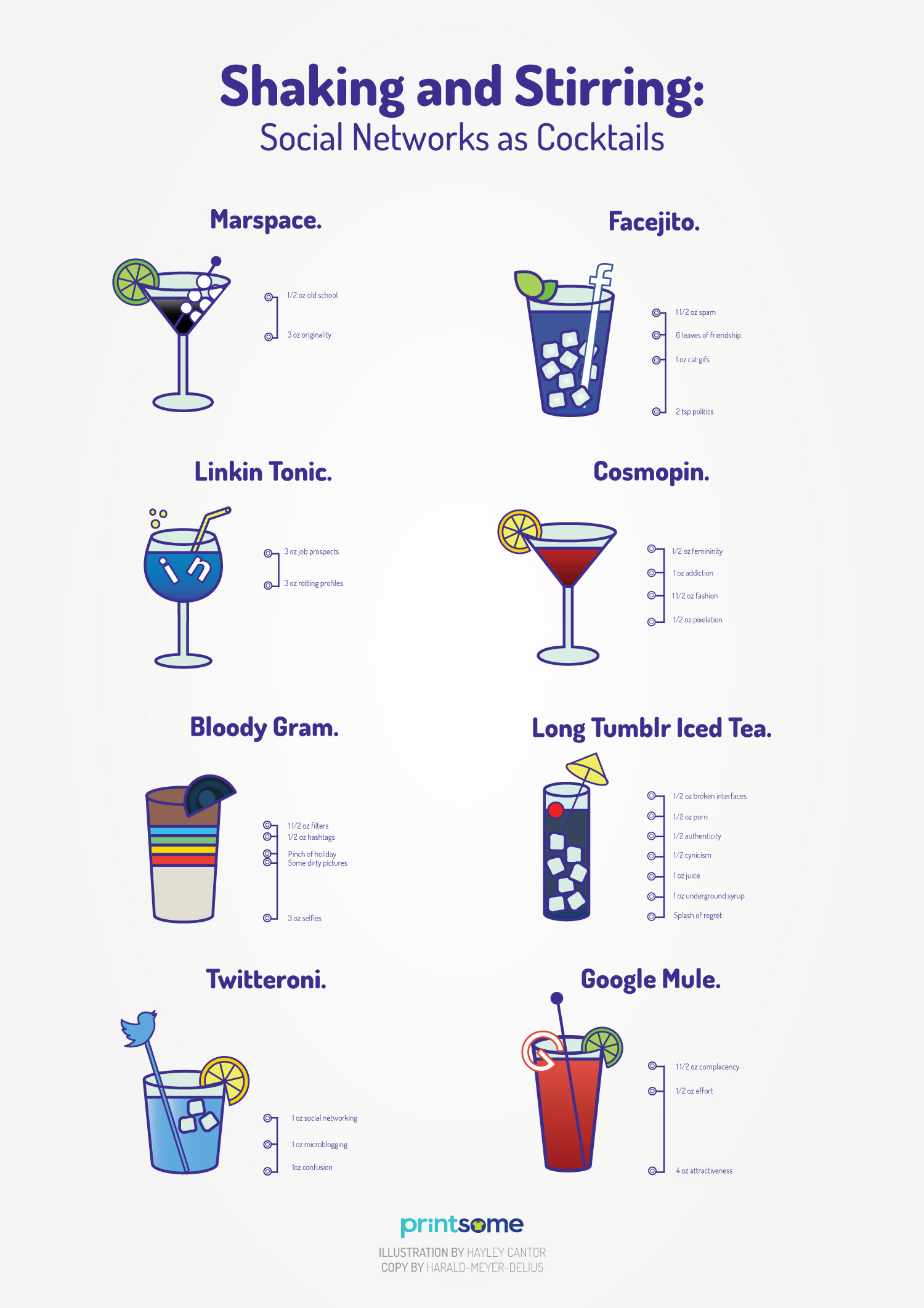