T-shirts as marketing weapons: How do top companies do it?

No other type of clothes can say they make cultural and political statements quite like the T-shirt.

We have mentioned before the promotional value printed tees can bring to your brand; we stated that this versatile garment is more than just a walking billboard. It is a powerful marketing tool (as proven by successful campaigns we’ll talk about in a bit) that can amplify your message. Let’s take a look at some of the benefits of using T-shirts in a marketing campaign.

Now if you truly want to make an impact, you have to be creative. If you were thinking of starting your T-shirt slogan with “Keep Calm and…” or “I heart…” then stop. Just stop. Everyone has moved on from there. It bears repeating, you have to think outside the box! Clever ideas can take a simple top from logo T-shirt to a canvas where creativity is explored to its fullest.

Examples of creative uses of T-shirts in marketing campaigns

In order to best illustrate the full marketing potential of the tee, here are some of the best T-shirt wearing marketing campaigns we’ve found online:

For the 2010 World Cup designers Bas van de Poel and Daan van Dam developed the kind of T-shirt that made you say: “why didn’t I think of that?”. Goes to show you that for an effective outcome, one doesn’t need a complex idea – although I don’t think I am the only person who thought that was Wayne Rooney rather than Wesley Sneijder. 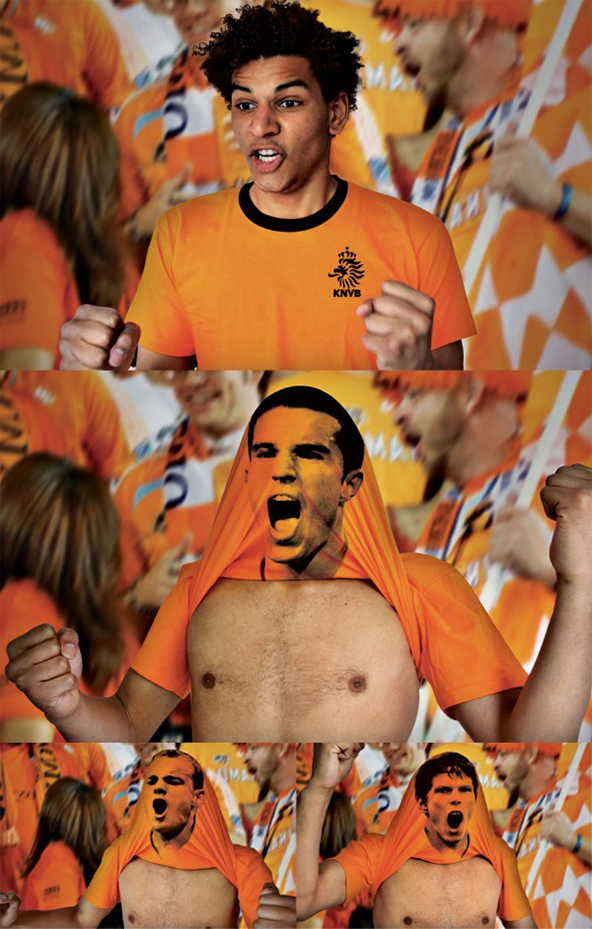 GLP Advertising and Design created this sweat measuring T-shirt as part of a marketing campaign for a personal trainer in Toronto. The idea is simple, measuring the time the athlete has been working out by the sweat marks created on their grey T-shirt. I’m not sure how accurate the timekeeping is, but nonetheless, it is an interesting idea. 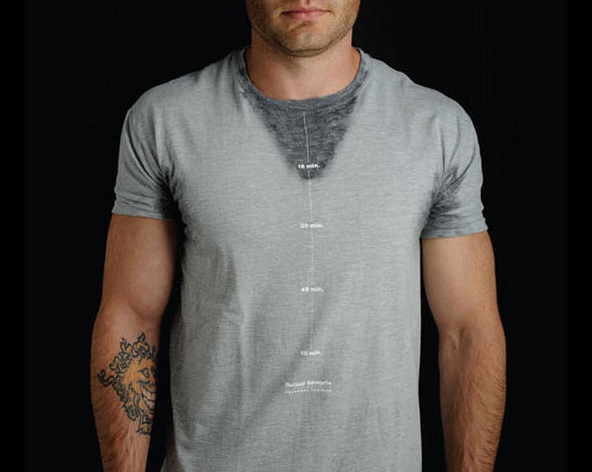 Back in 2013, Coca-Cola organised a campaign that consisted of sending 600 T-shirts around the world to some of the company’s biggest fans and most loyal employees. Once they received the tee, each person had instructions to put it on and take a picture of themselves using special software provided by the company. Each print was a frame that when put together with the rest of the images would create a 70 seconds animation. Of course, with the kind of budget Coca-Cola has, anything is possible, but we can still take a lesson from this case and that is that with creativity campaigns are much more impactful, and you don’t need money to use your imagination.

Chances are that if you didn’t see the video, at least someone shared it on your Facebook newsfeed. Kony 2012 is a documentary that talks about the crimes committed by fugitive and militia leader Joseph Kony in central Africa. The film was produced by a non-profit organisation called Invisible Children with the goal of financing the charity “Stop Kony” that would have him arrested by the end of the year. The video went viral and soon everyone was talking about Kony (by April 2016 it has been viewed over 120 million times on YouTube). Merchandise such as the T-shirt above was created to go along with the video.

Unfortunately, Kony is still out there, but the campaign managed to raise an impressive $26 million that year and even influenced the US government into taking action in the conflicted area. 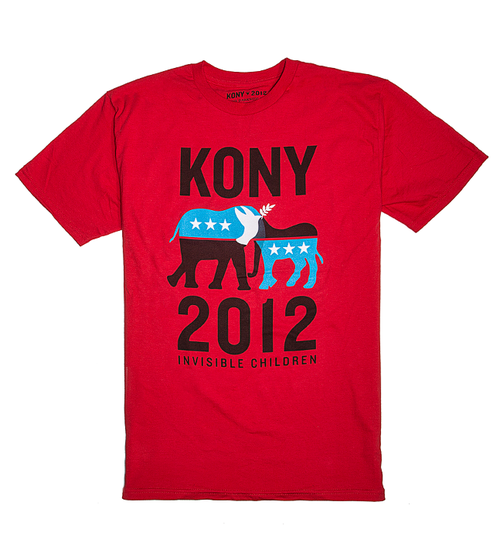 It is safe to say that the “I love New York” tee is one of the most famous T-shirts in the world, but few know that it was designed as part of a tourism campaign for the Big Apple. In 1977 the New York State Department of Commerce contacted the advertising agency Wells Rich Green to design the campaign and designer Milton Glaser to create the logo. Thinking the campaign would only last a couple of months, the designer did the work pro bono — looking back, it was probably not the best idea. Let it be a lesson to all of us. Needless to say, the symbol, composed of a heart and American Typewriter font, has been featured in more movies and celebrities than any other fashion piece — well, maybe second to UGG boots. 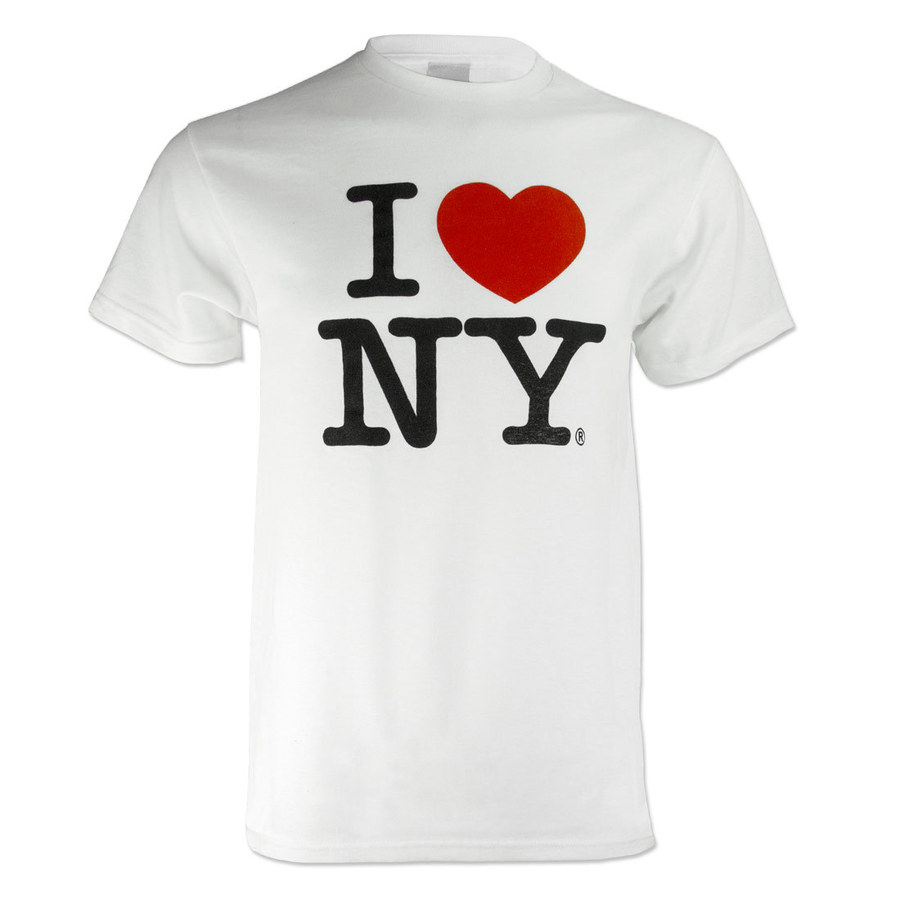 We’re not getting into the whole “Is it right or is it not right to wear the t-shirt of a band you don’t know” debate in here because one, we have an entire post dedicated to the subject; and two, it all comes down to good design. The logo was created by the band’s art-coordinator Arturo Vega who reimagined the US Presidential Seal as a punk logo with the purpose was to market the group as the greatest American band. Little did they know it would outlive its source material for many years. The license of the design is managed by Ramones Productions Inc, the company in charge of dealing with the band’s assets, which sells it to retailers all around the world. 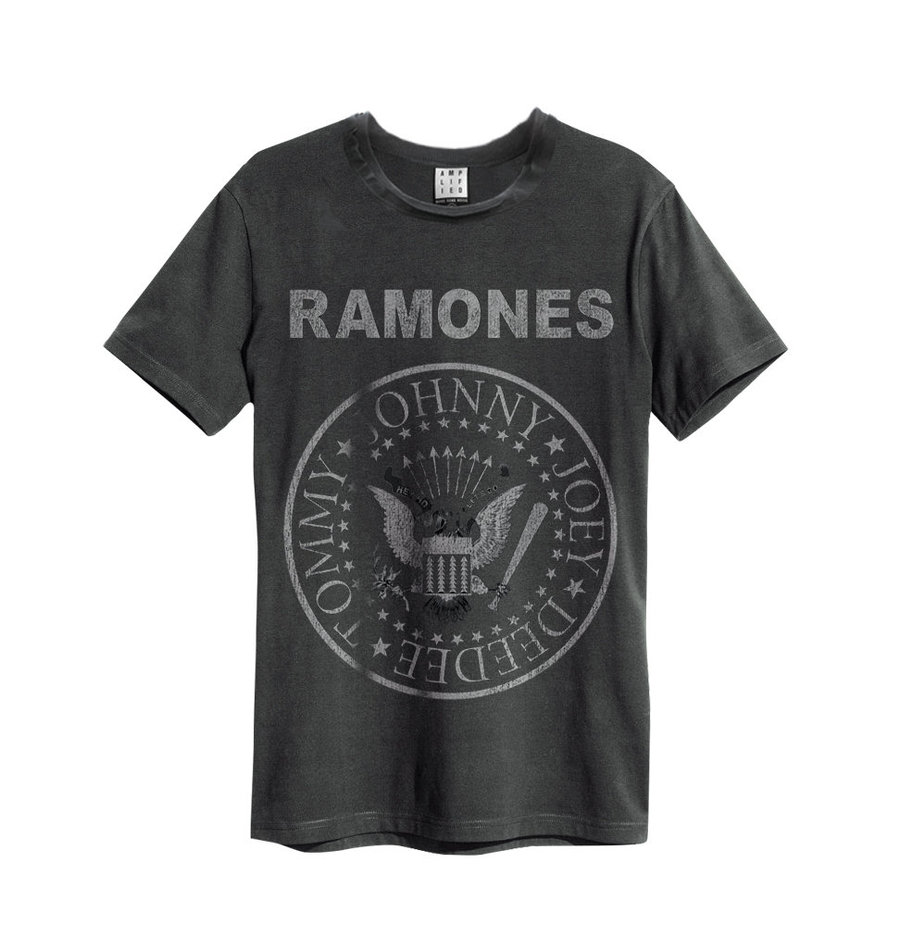 “Protect the Skin you’re in” and “Protect your largest Organ”

“Protect the Skin you’re in” and its male counterpart “Protect your largest Organ” it’s a marketing campaign designed by fashion designer Marc Jacobs to raise awareness for skin cancer. The project was launched in 2006 and has since recruited celebrities like Victoria Beckham, Naomi Campbell and Cara Delevingne, among others, to pose completely naked for the project. I wasn’t able to get information on how much money the campaign has been able to make, but it sure has attracted its fair share of media attention.

For the UK premiere of the Entourage film, Rockstar Energy Drink asked us to print for them a few T-shirts featuring the logo. It is quite common for brands to advertise their products during events organised by a third party. Thanks to sponsor deals, brands are able to reach a niche audience that they otherwise may not have access to in a different scenario. 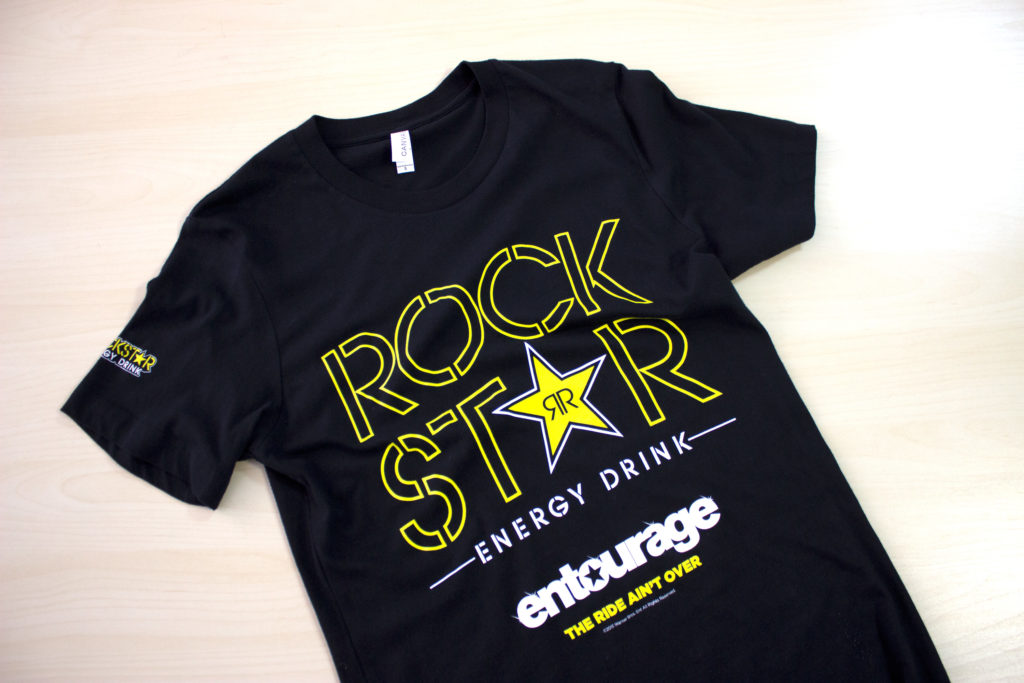 When Isaac Tigrett and Peter Morton opened the first Hard Rock Café in London back in 1971, little did they know that it would become into one of the most famous chain restaurants in the world. Known for featuring memorabilia from the music industry, the brand is also popular for its merchandise of which the most recognisable is the signature Hard Rock Café T-shirt. The garment, which gets branded with its city where it’s sold, has become a collector’s item with many going as far as to create websites devoted to their collection. If the T-shirts were intended to be collected or not in the first place we may never know, but it is still a good strategy for a marketing campaign. 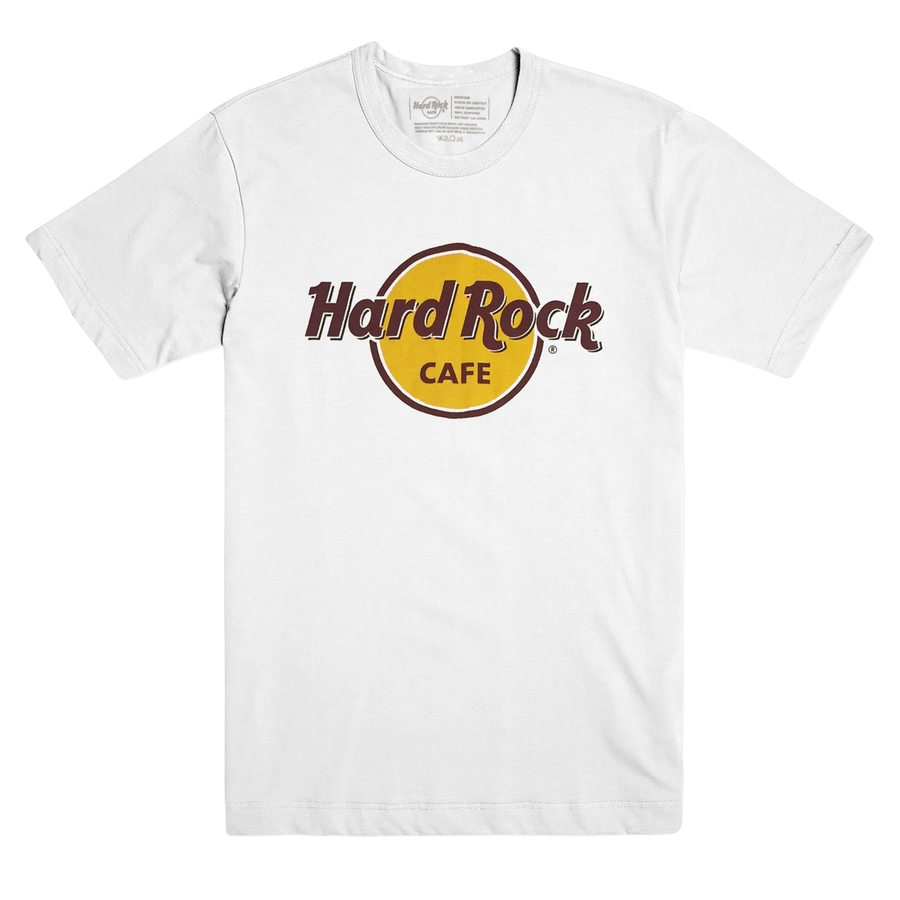 Who hasn’t seen this ad by now? Whether you find it cute or simply obnoxious, you have to admit it’s creative. The original campaign was released in France in 1998 and since then different versions have resurfaced throughout the years. With the tagline “Live young”, the latest rendition has been launched with Supermodel Gigi Hadid at the forefront. The babies still dance, surf and skate, of course. Along with the ad, Evian has also launched an online shop where people who want to get in touch with their inner child can purchase either a printed T-shirt or sweatshirt.

Under Armour “I will what I want”

Independent agency Droga5 released in 2016 the second face of “I will what I want” with a celebrity-packed launch event in New York City for which they printed tops with the catchy slogan. The marketing campaign consists of the empowering stories of five women, including supermodel Giselle Bündchen, that overcame adversities to accomplish their goals.

Feminine products brands have fame for coming up with advertisements that are “out of touch with reality” to say the least but Always decided to challenge that with the #LikeAGirl campaign, which aims to dispel stereotypes about what girls can and cannot do. While the subject may feel like it’s been done before, the brand does manage to narrate it with a lot of heart.

Straight out of Compton

Universal Pictures and Beats (yes, those headphones) joined forces to promote the film Straight out of Compton. The movie, which is a documentary about the life of hip-hop legend Dr Dre, was launched along the “Straight out of…” tagline which invited users to adapt it to their own story. Needless to say, it became very successful and turned into one of the most popular memes of the year.

This is a project that intends to design a single flag that represents the entire Planet Earth during space missions. As of now, astronauts and spaceships carry the flag of whichever country funded the mission, but as the campaign’s website points out, space travellers are not only representing their homeland, but also Earth.

As you may already know, it is a big issue for some people to get access to clean water. The campaign #NoFilter aims to bring awareness to the issue and with each #nofilter post on Instagram buy a filter for someone in need.

Thanks to their versatility, easy production and low costs, t-shirts can be a great tool for a marketing campaign. Not to mention that if the garments are appealing and of good quality, they will be worn way pass the campaign period, extending the life of the message. Sure, it has been done. I hear you say, and I’m not going to lie, it is a very common resource that people use to advertise a brand, but this doesn’t mean it cannot be reimagined. Think of the Coca-Cola campaign. It was massive and expensive, but the idea it’s still pretty simple. Did you ever do a frame by frame animation with stick figures on the pages of your notebook in school? Many of us did. It just goes to show you that with a little imagination one can create the coolest things, even with the most mundane of materials.

So get out there, mate and be creative!

Did we miss any great t-shirt marketing campaigns? If so, please let us know in the comments below. You can also join the conversation through any of our social media outlets. In the meantime, keep reading the Printsome Blog for more awesome content.