We drew 8 famous entrepreneurs as superheroes

Here at Printsome, we’re in the business of wasting time express T-shirt printing all around UK.

Which is why we often wonder how certain brands would look like if they switched products or what would it be like if top logos exchanged colours. This time around, though, we’re picturing famous entrepreneurs as superheroes. Since some people already consider them heroes, all we had to do was just add the “super”.

Without further ado, we introduce:

The League of Extraordinarily Rich Entrepreneurs:

RICHARD BRANSON AKA The Rebel Billionaire 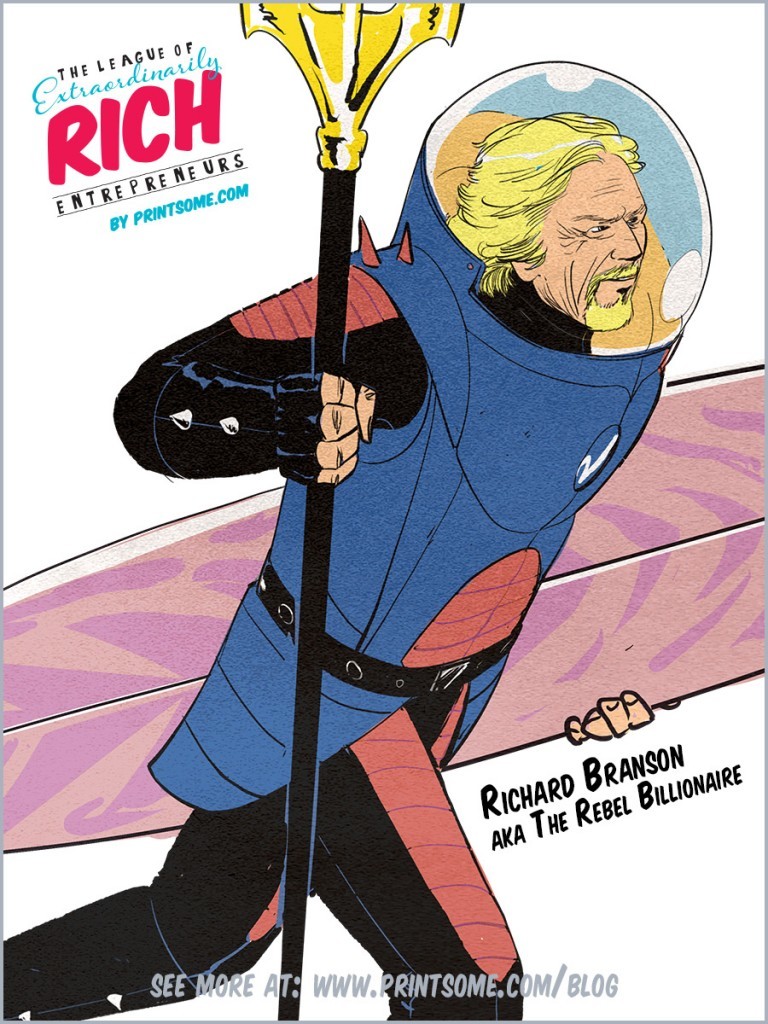 Richard Branson joins the battle, guns blazing, as a rogue looking for his next bounty. Branson wears a suit and helmet that allows him to dwell both in space and underwater, comfortably. He rides a technically advanced surfboard that gives him the ability to fly and travel to his island in the Caribbean with incredible speed. The CEO of Virgin is a fearless fighter that relies more on brute strength than strategy and it works for him, most of the time, but it is also a weakness that a savvier enemy can take advantage of. 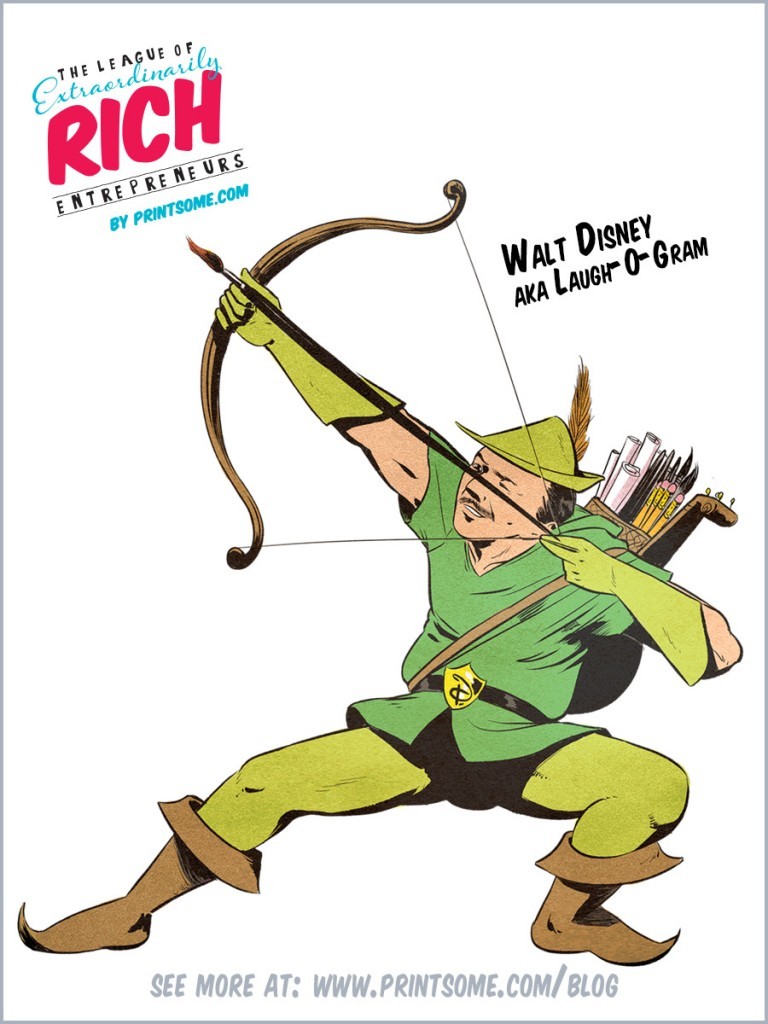 Mr Disney is the bard of the group. He chants in battle to boost his teammates’ morale and, at the same time, inspire knee-trembling fear into his enemies. As a weapon, Walt wields pen and paper which allow him to sketch whatever his imagination fancies. His chants bring his creations to life to aid him and the rest of the league in battle. Walt’s charms are powerful, but they don’t last long. In order to endure, Mickey’s father must keep coming up with new ideas, constantly. 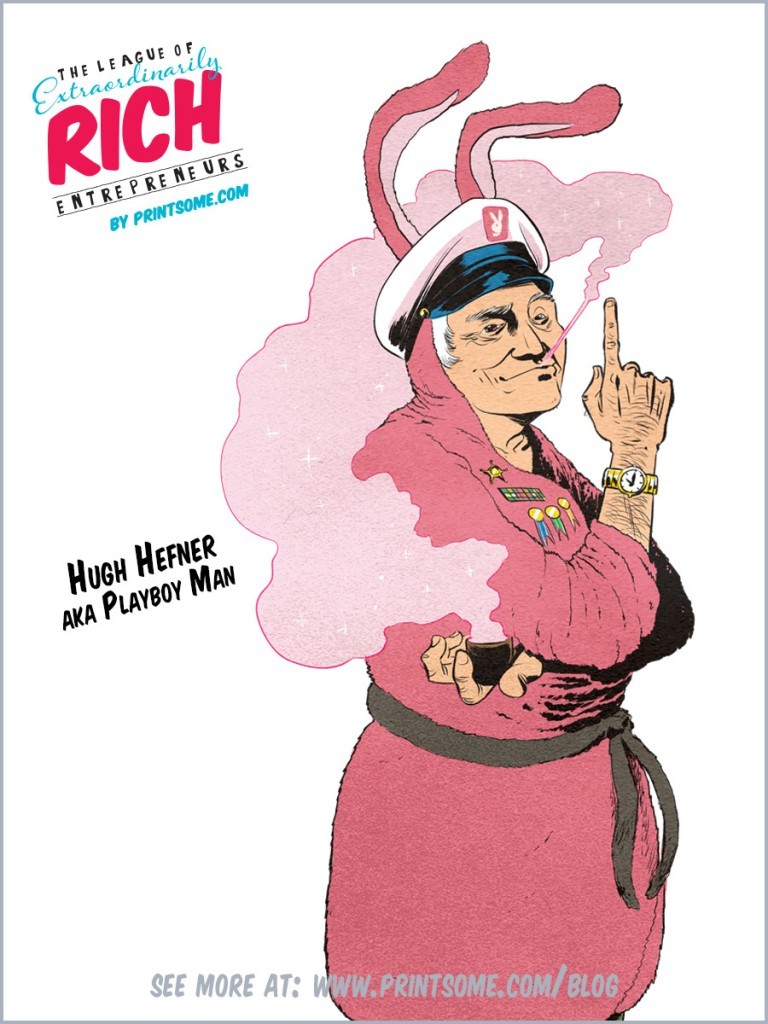 Mr Playboy himself would rather make love than war. For him, a perfect day would be spent playing with his “bunnies” and smoking a pipe rather than going to the battlefield. Even so, the Casanova should not be underestimated, Hefner is a formidable warrior. Hand to hand combat is his speciality. Whenever he needs a little extra help, he uses his pipe, which works as a versatile gadget. Depending on which kind of herbs he fills it with, it can create a smoke screen (for quick escapes) or make people dizzy, cry, and even throw up. Unfortunately, while Hefner’s actions are legendary, his stamina is not what it used to be and that might cost him in the arena. 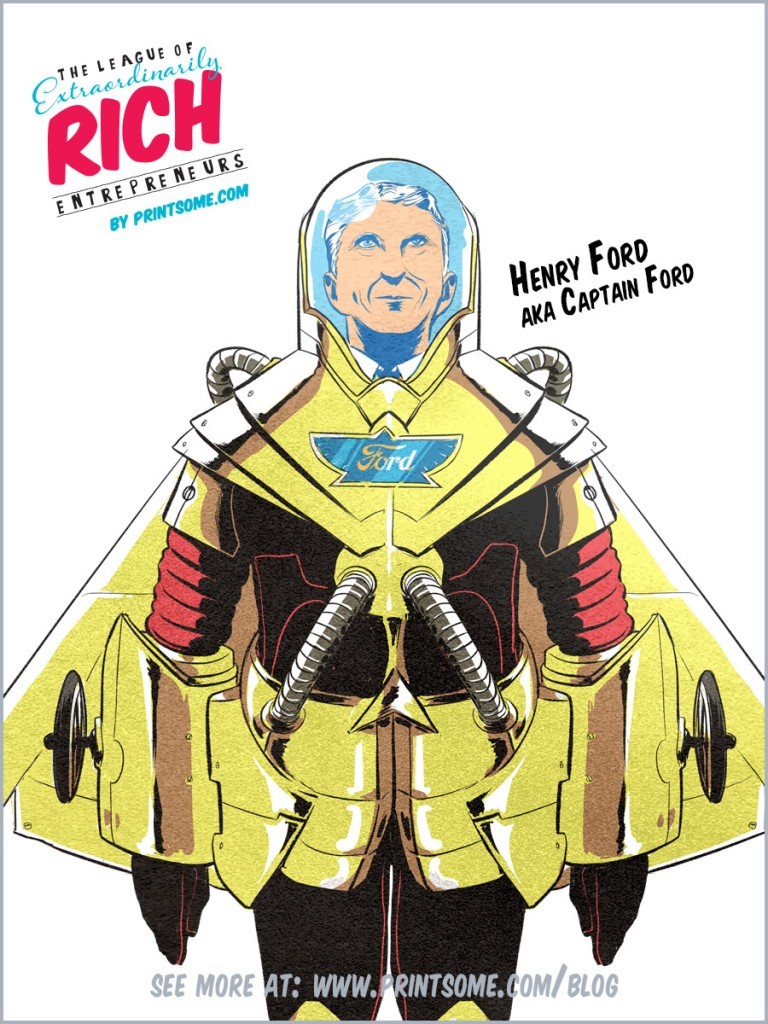 The father of the modern car is the current leader of the League of Extraordinarily Rich Entrepreneurs. Kindly, but with a stern fist, he uses his leadership skills to lead his teammates to victory. Contrary to what most people believe, he is a pacifist preferring diplomacy over war. But Ford does go into battle from time to time and when he does, he uses a metal suit that allows him to transform into several different forms. Of course, there is a car shape that allows him to travel great distances on land, but his favourite one is a jet-pack that grants him the ability to fly. 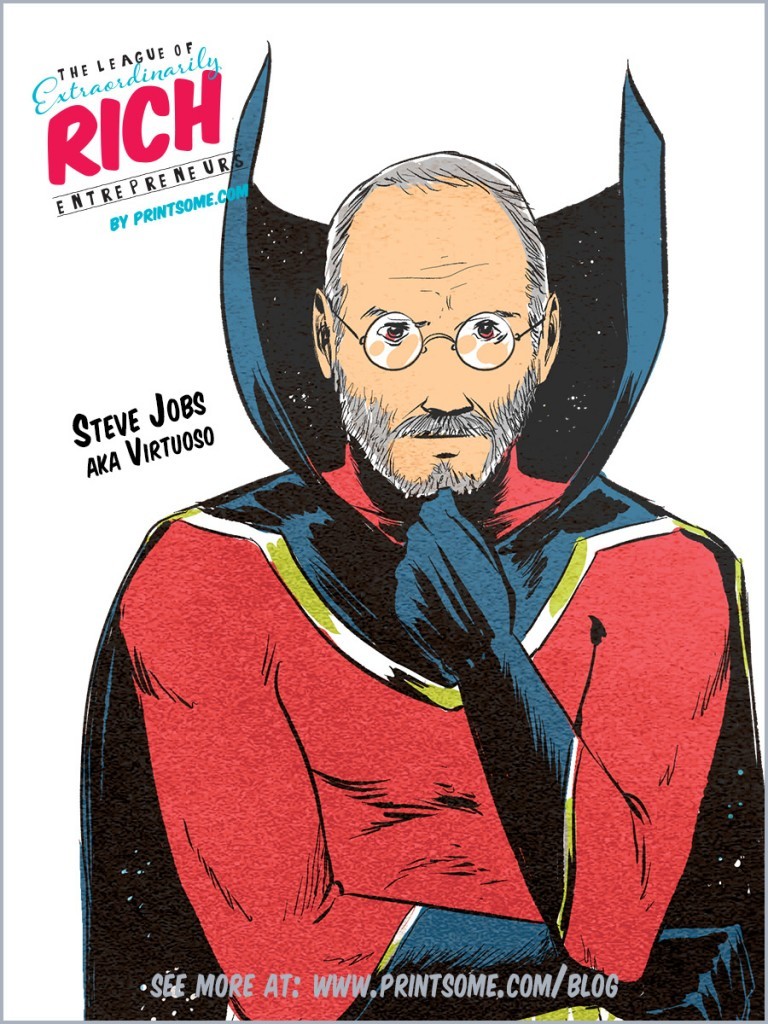 Steve Jobs uses his super-human intellect to help his team win battles before they even begin. The creator of the Mac computer spends most of his days, in a trance-like state, looking for answers to some of man kind’s most troubling questions. His enemies would rather not wake him up due to fear of his powers. Jobs uses his telekinetic and telepathic skills to fight and manipulate foes. When enraged, Apple’s father loses perspective and can act irrationally.

GUY KAWASAKI AKA The Evangelist 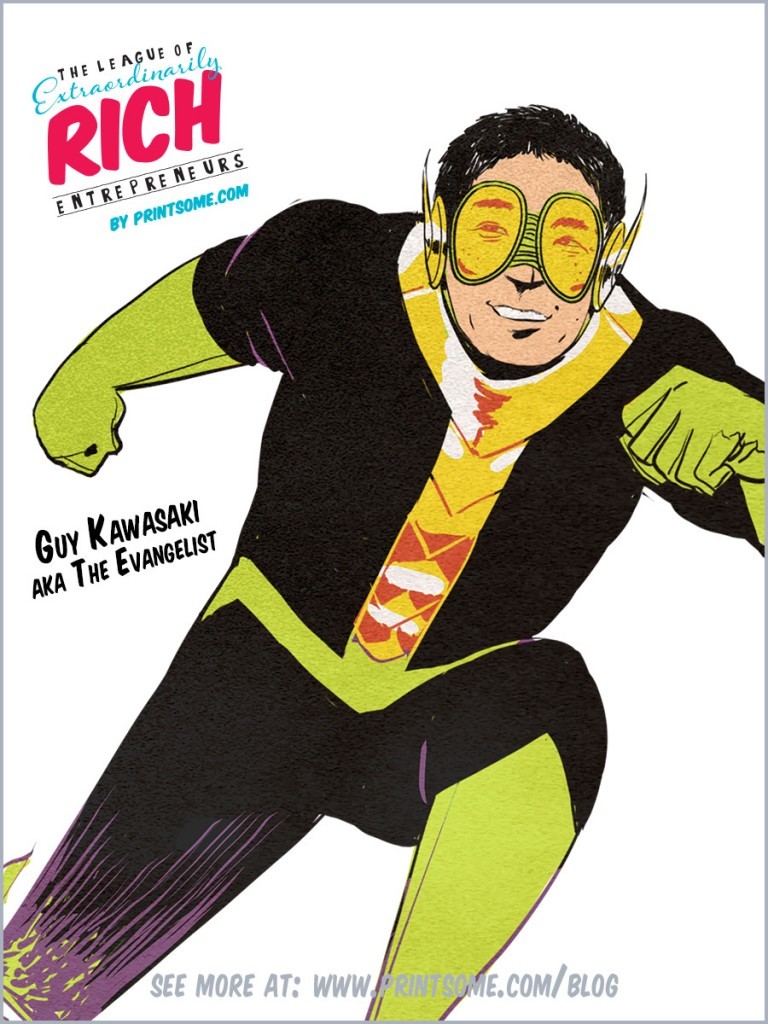 Every morning Kawasaki writes a book, gives a TED conference, posts on social media multiple times, and kung fues the living crap out of a bad guy before we, regular folk, even have our first cup of coffee. How does he do that? Well, a super-human speed of course. The former Apple evangelist is so fast that he sometimes seems to be in different places at the same time. Kawasaki’s swiftness is not limited to his body, though. His brain works at light speed as well, knocking enemies down with flawless logic. The rest of the team would hate him if it wasn’t for the fact that he is so bloody charming. 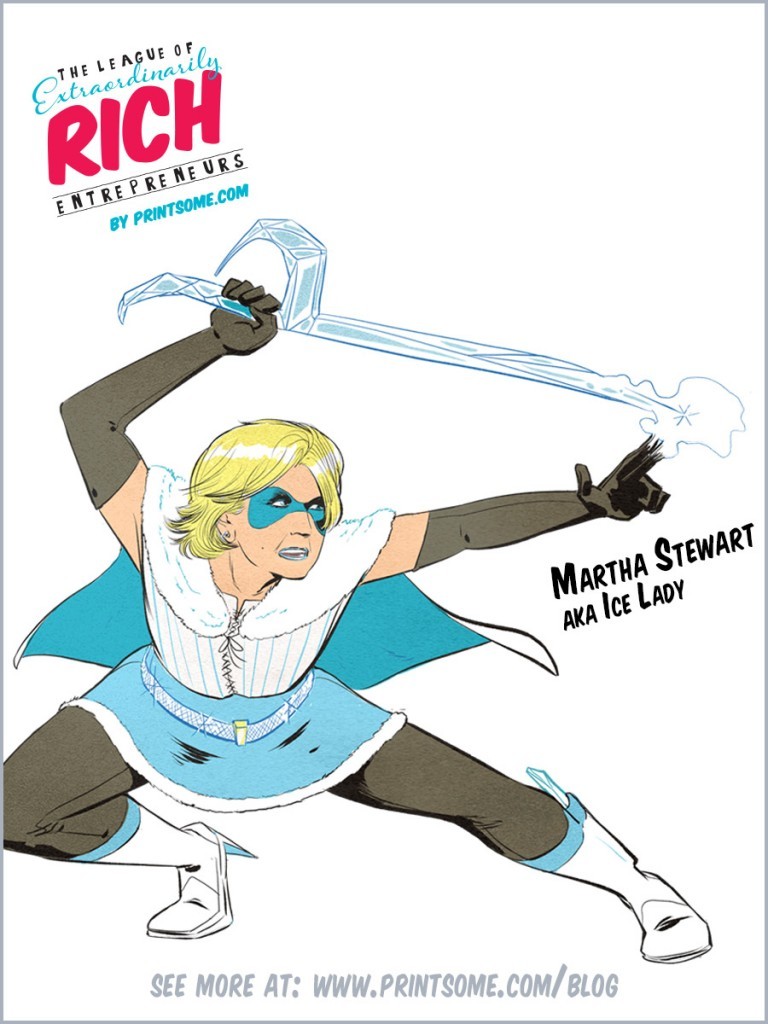 Martha Stewart enters the battle as a highly-skilled assassin. The Ice Lady approaches her victims without being noticed and attacks when it’s least expected. Most won’t know what hit them. Stewart is a deadly foe, and while her accuracy and her skills with guns are matched by no other, her stealth-like nature has put her in precarious situations where she has heard more than she should.

OPRAH WINFREY AKA The Priestess 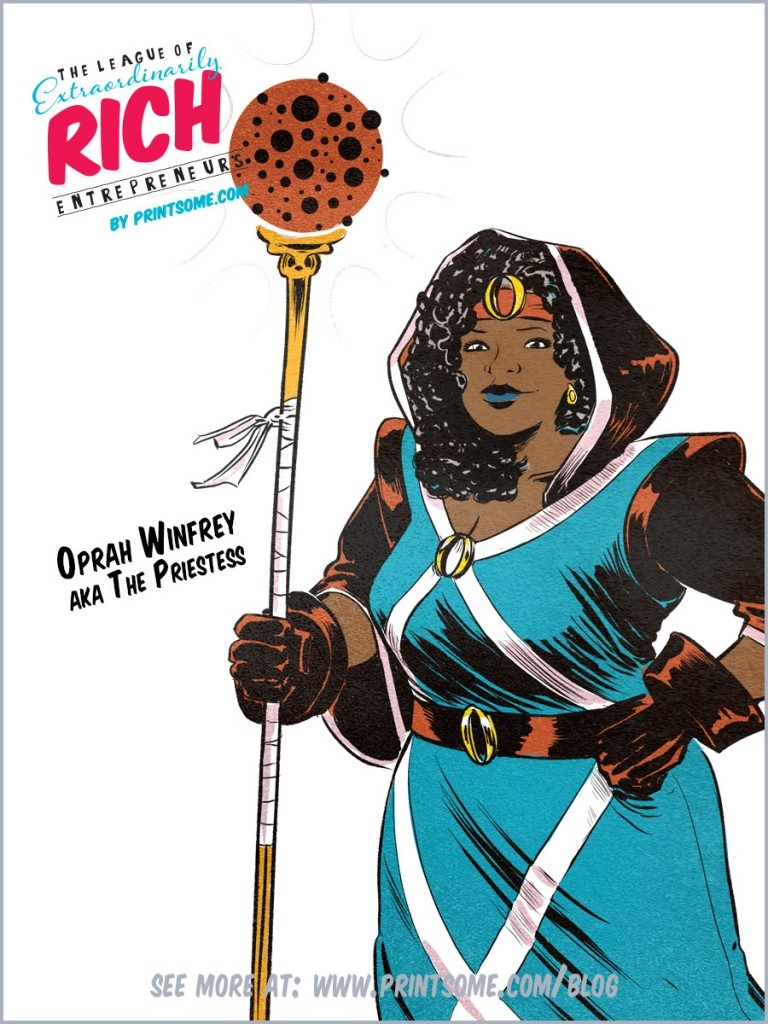 The co-captain of this team joins as a healer. Oprah’s abilities have proven to be invaluable in the league. The media mogul uses her power of empathy to absorb the negative energy of her teammates and heal them. But don’t let her kind and compassionate nature fool you, she’s more than capable of defending herself and anyone who dares to question it will regret it. She can also use this energy as projectiles and shoot them wherever she chooses. Oprah needs to keep her emotions in check since an imbalance in her psyche could cause her powers to misfire and undo the good that she has done. 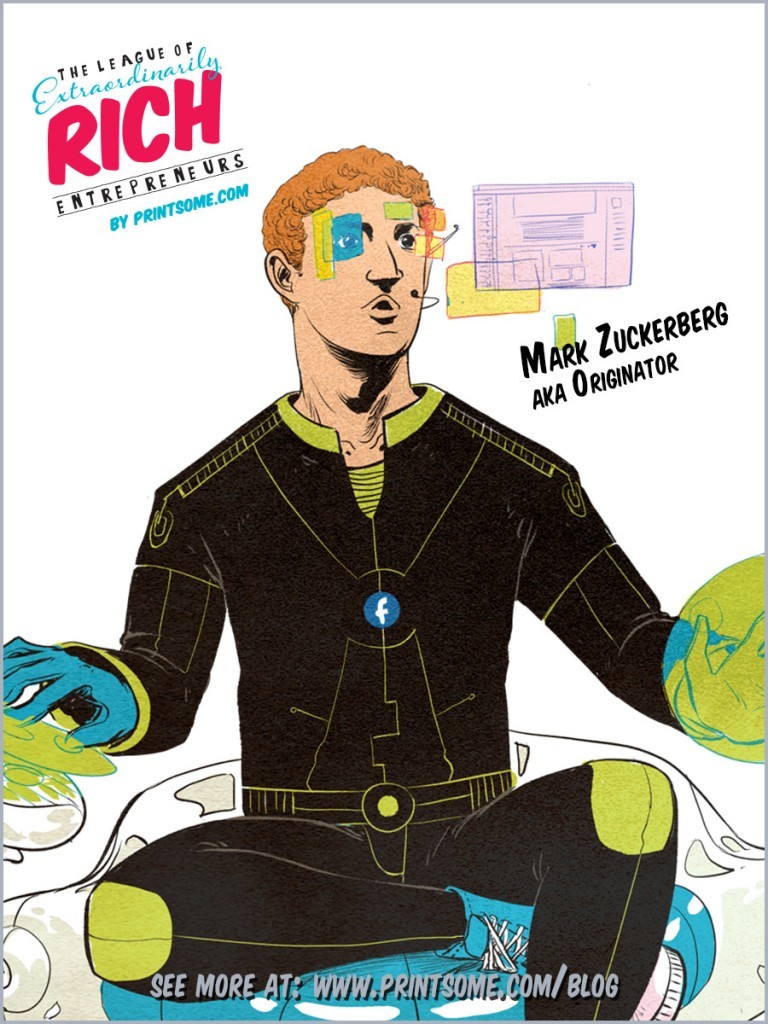 His reclusive nature makes him probably the most mysterious of all the members of the League of Extraordinarily Rich Entrepreneurs. Using his knowledge of the “web”, Zuckerberg is able to tap into invisible electromagnetic fields and absorb their energy, ejecting it later as bolts of lighting (essentially transforming his body into a human firearm). While his loner tendencies may keep him safe most of the time, there are also times when a superhero needs allies and it’s in that moment when Originator struggles the most. 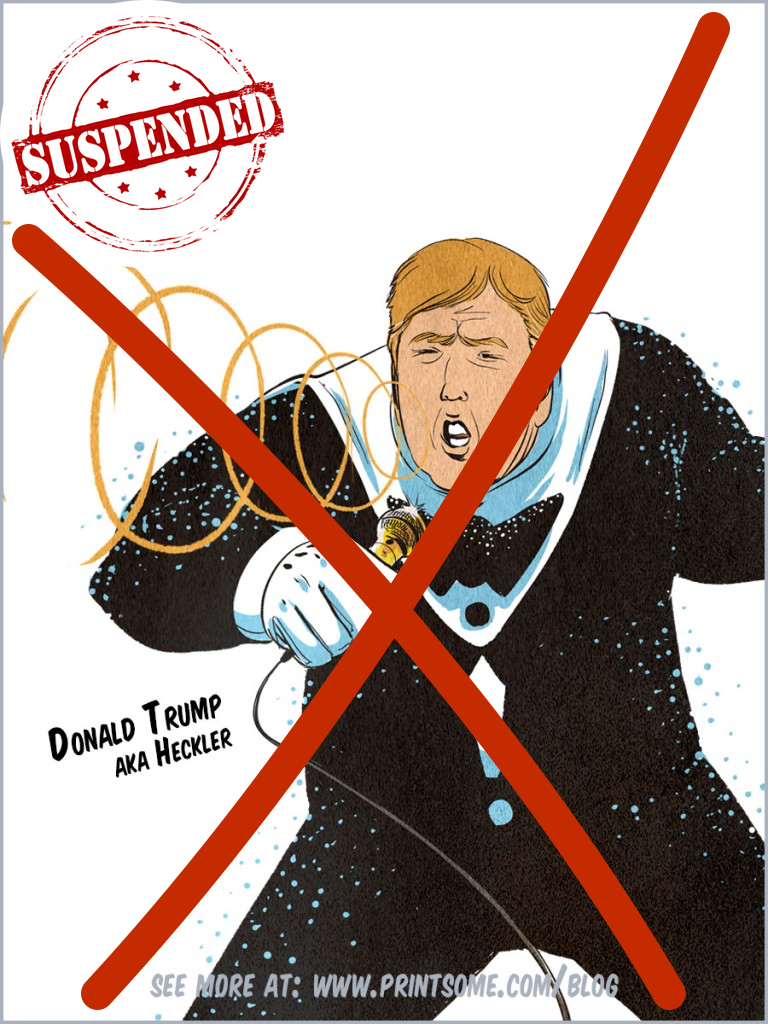 Mr Trump uses his loud voice and personality to confound his enemies. His loud decibels make people uncomfortable, but what’s unbearable is not how he says it, but what he says! Confounded by statements that lack reason or logic, his enemies scatter covering their ears and running aimlessly. While his yells are scary, his powers are actually easy to deflect when using the right equipment (earplugs). Like Herpes, the rest of the league wonder why they got him and when he’ll go away.

I hope you liked the illustrations, at least as much as we did designing them! Do you think we forgot someone? Let us know in the comment area below (for any other inquiries, just drop us a line on marketing@printsome.com)! Ah! And don’t forget to check out our other creative exercises! Have fun and be creative!

Printsome is a T-shirt printing in London agency that delivers all across the UK, from printing T-shirts in Brighton to York and anywhere in between. So, if you’re after a T-shirt or custom clothing, get in touch for a quote and indulge yourself in some awesome customer service.