Ashton Kutchi by Airbnb and other useless Tamagotchis

Tamagotchis were no joke.

It was such a phenomenon that cemeteries were created in Hungary and the Cornish countryside where distraught owners could bury the plastic carcases of their virtual pets. There is also a forum (which is still active) where users can mourn their pixelated friends.

In my case, the trauma didn’t happen when my Tamagotchi died. For me, it was when after finally having convinced my parents (weeks of begging) to buy me one, I arrived at school only to find out that the gadget wasn’t really a Tamagotchi, but a bloody Giga Pet instead! Which is why today, I have to write from an undisclosed location where I can hide from the shame.

But why am I telling you all of this? Basically because like all things 90’s, Tamagotchis are making a comeback! Just recently, Katy Perry and Orlando Bloom each took one to this year’s Met Gala and a nightclub in Glasgow is hiring a nanny for their in-house electronic pet.

But, what is a Tamagotchi?

If you were born in the mid-eighties then, chances are, you owned a Tamagotchi. In case you don’t know what that is (stranger things have happened), let me enlighten you: The Tamagotchi is a virtual pet produced by Japanese Toy manufacturer Bandai.

Allegedly, the idea for the toy came when one of the company’s workers Aki Maita realised she wanted a pet, but couldn’t handle the hassle that came along with it. An electronic animal was a perfect solution because even though it required constant care and even died when you didn’t pay enough attention to it, it wouldn’t poop all over the place.

These lovely creatures are composed of just a few pixels, but they are more than enough to express emotion and make them surprisingly endearing. Tamagotchis start as an egg that after hatching reveal an adorable blob that, depending on how well you take care of, transform into one creature or the other. 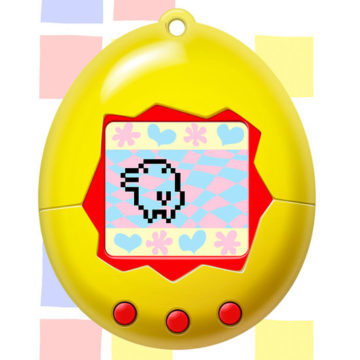 The visual style of the Tamagotchis has been inspired by the Yōkai, which are mythical creatures from Japanese folklore. These monsters have inspired many a video game and anime, like Pokémon for example. To the rest of the world, they were simply cute big-eyed thingies. As for their backstory, it’s pretty straightforward: They’re cutesy aliens that have landed on earth and you have to take care of them because, well, they’re babies!

The virtual pet came in the form of a very simplified handheld video game console, which was in the shape of an egg and only had three buttons. In the first generation of Tamagotchis, you could only play with, give medicine, feed, scold and clean them. It may sound really simple, and it was!

But it was also completely addictive and time-consuming. Especially when they started to nag every five minutes and you had to deal with their shit — literally. They needed constant care. Newer editions are more independent, but still, if you leave them unattended for a few hours they will die, for sure.

The first version was released in 1996 and the rest was history. Tamagotchis were marketed to give Japanese girls a taste of what it would be like to be a mother. Which is why Bandai wasn’t expecting for it to become so popular internationally, and they surely weren’t counting on boys getting hooked on, as well. Apparently, men can also be caretakers and may even cook and pick up a broom from time to time, go figure.

If you would like to go back to the days of constant beeping, you can nowadays purchase your Tamagotchi as an app for Android and IOS or buy an original one from online retailers like Amazon.

What if top tech brands were producing Tamagotchis instead of their actual products?

Anyway, here at Printsome we like to waste time be creative and the other day, while we were talking about the Tamagotchi resurrection, one of my coworkers thought, “Oh my gotchi!* What would Tamagotchis look like if they were produced by Google, Samsung or Apple?” Let’s take a look and find out…

* As much as I would like, I cannot coin the expression “Oh my gotchi!” I borrowed it from ohmygotchi.tumblr.com.

Google’s Tamagotchi first form would probably be a G (in serif or sans-serif style), for obvious reasons, that with proper care turns into a propeller beanie cap. This creature would need lots of mental stimulation through didactic games, the regular Tamagotchi “guess which direction is going to turn” game wouldn’t work here since it would only bore the hell out of the Burgroidtchi.

Instead, the user should try developing the creature’s cognitive functions with stimulating games like this one. The final form would be something similar to the Bugdroid (Android’s robot) unless Google decided to change the algorithms halfway through the creature’s evolution, then God knows what it would end up looking like.

How would you feel if after spending a considerable amount of time raising a cute little blob, you woke up one day only to find out that it has transformed into a human head with tiny legs coming out of it? Nobody said Tamagotchis had to be cute!

That’s what many owners felt when their cute little space creatures metamorphosed into Bill, and that’s how I felt when I found out that Ashton Kutcher is an investor and strategic brand advisor of Airbnb. So yes, the final form of Airbnb’s Tamagotchi should look like Ashton Kutcher’s head on two tiny legs. And no, you’re not getting punk’d*.

* The views, opinions and bad jokes expressed in this article do not necessarily represent Printsome as a whole.

The Tamagotchi of the Korean juggernaut would be less cute, but more involved in its performance than its counterparts. Unlike other virtual pets, instead of games and snacks, Hantchi would require exercise and healthy meals. Its first form would be a star, followed by the second stage of two stars and finally an adult stage composed of three stars.

If the Wikipedia’s entry is right (and why wouldn’t it be?) then the name Samsung is the Korean-hanja word for tri-star or ‘three stars’ which is symbolic of something big and powerful in Korea. The name ‘Hantchi’ comes from the company’s contribution to the ‘Han River Miracle’ which is a period of great economic growth in South Korea.

Yes, it is an apple inspired creature, but what would you have me do? A Steve Jobs Tamagotchi? We already have Ashton Kutcher’s head. Anyway, the virtual pet would start out as a seed. Not that exciting, but it is a cute seed nonetheless.

The seed would need to be cared for with gentle petting, water and sunlight. The second stage would be a tiny green sprout and then it would blossom into an apple tree. The virtual pet’s name comes from the Apple Lisa, one of the first personal computers sold to the general public and named after Steve Job’s daughter.

One of the first designs of the Coca-Cola bottle was inspired by two of the beverage’s original ingredients: The coca leaf and the kola nut. While original and pleasant to the eye, it was deemed too unstable for production (the middle section was wider than the base) but we happen to think it would make a really cute Tamagotchi.

Of course, only snacks should be handed to this pet, otherwise, you might run the risk of it getting angry (hangry?). Contourtchi is very loyal until you order a Pepsi, at that moment it will abandon you quicker than you can say ‘refreshing’.

Considering how harmful captivity is for sea mammals, maybe Seaworld should consider entering the virtual pets industry. The park’s Tamagotchi would be named after its biggest star Shamu*, of course, and would start off as a tiny black fish that would later transform into a sort of dolphin and then later into an awe-inspiring orca.

After the whale has evolved, and you’ve congratulated yourself for being such a good career, Shamutchi would pack up her things, swing them over her fin, and swim away — leaving behind a note saying “Not even virtual whales should be held in captivity”.

* Interesting fact: Shamu was the fourth whale to ever be captured by SeaWorld and died back in the 70’s. The name would later be used only for ‘show’ by the whales that came afterwards.

Being selected in 1971 to represent the company, the siren has had her fair share of redesigns and controversies. From being topless and showing off her two-tailed body, she went on to be completely covered and have the lower half of her body barely visible. Still, her Tamagotchi would probably show her fully.

Like Seaworld, she would start out as a tiny fish and then later become a one-tailed mermaid. The final form would be the two-tailed, crowned mermaid we all have come to recognise. Mermaitchi would probably not be the most entertaining creature to raise, but she would surely, every morning with clock precision, wake you up at the same time and remind you to drink your fresh(?) cup of Starbucks coffee.

Cornelius is the name of the rooster on the packaging of Kellogg’s Corn Flakes, in case you were wondering. Yes, I know. This is why I’m here, to answer humanity’s most pressing questions.

Kellogg’s Tamagotchi would start out as an animated corn flake, that when fed with milk, turns into a chick and will later become a full grown rooster. Cornetchi may only be fed with, exclusively, Kellogg products and if you ask what they’re made of, he may or may not answer.

Thanks to our five years of experience in the T-Shirt printing industry, we are now able to cater to professional and up-and-coming designers. Printsome’s services are not only perfect for starting a clothing line but also for aiding an already established brand.