How cycling became a valuable brand in the UK

In order to celebrate the upcoming Tour de Yorkshire, we’ve decided to take a look at how cycling became a billionaire brand in the UK.

BTW, if you’re in Yorkshire or anywhere near and need T-shirt printing, you know who to call. *wink*

The Tour de Yorkshire is a cycling event that has been taking place every year since 2015. The event gathers the best cyclists in the UK and the rest of the world to cycle around the beautiful scenery of the English county. In 2017 the race will take place from the 28 till the 30 of April.

The idea for the tour came when in 2014 the Tour de France successfully finished its race in Yorkshire. Seeing the potential in the race, the Amaury Sport Organisation (ASO) jumped on the opportunity to organise their own.

This year the special occasion will take place during the weekend of April 28. The first stage will go off on Friday, the second on Saturday (a women’s race will also take place that day) and the last one on Sunday. The routes have been strategically designed to include some of the most beautiful sights in the county which include two UNESCO World Heritage Sites: Fountains Abbey and Saltaire.

Onlookers are welcome to come and cheer for the athletes and organisers are counting on it. Last year the race attracted around 2 million onlookers and generated £60 million to the local economy.

With a record number of 36 teams drafted to take part in the races, so far it seems like this year’s event will be the biggest yet.

How cycling became a billionaire brand in the UK

Thanks to a record number of people signing up to British Cycling (the governing body of cycling in the UK) and raises in sales of specialised apparel, in 2014 the cycling industry had an estimated worth of £1.4 billion.

In recent years, the popularity of cycling has increased exponentially in the UK and not by accident. Many point at Sir Bradley Wiggins as one of the reasons for the spike of interest in the sport. In 2012 the professional cyclist not only claimed the first victory for Britain in the Tour de France but also won gold in the Olympics that same year.

But little does a name do without some money to back it up and in sports that means sponsorships. Another important factor that helped the sport get public awareness was the backing of Sky. The telecommunications company not only secured Wiggins’ victory in 2012 but also fellow Brit Chris Froome Tour de France triumphs in 2013, 2015 and 2016.

Recent evidence shows that the interest of the sport in the country will only continue to grow.

Examples of marketing campaigns about cycling

In order to showcase the power of cycling and media, we’ve gathered up a few examples of marketing campaigns around marketing from recent years.

The first entry comes from the agency BBDO Toronto that won silver at the CLIO awards for this video they produced to promote the Parapan Am Toronto 2015 games. There’s nothing flashy about it and that is what makes it effective. The message is strong and gets delivered clearly. Goes to show you, you don’t need a lot of fireworks to create an effective marketing campaign.

Campaign to promote cycling in the city of Munich

The following is a 2011 social campaign to increase cycling in the German city of Munich. The project included events, street interventions and even merchandise! The companies behind it were Helios, Green City and SportKreativWerkstatt. If you want to find out more about the campaign, you can check out the following PDF. 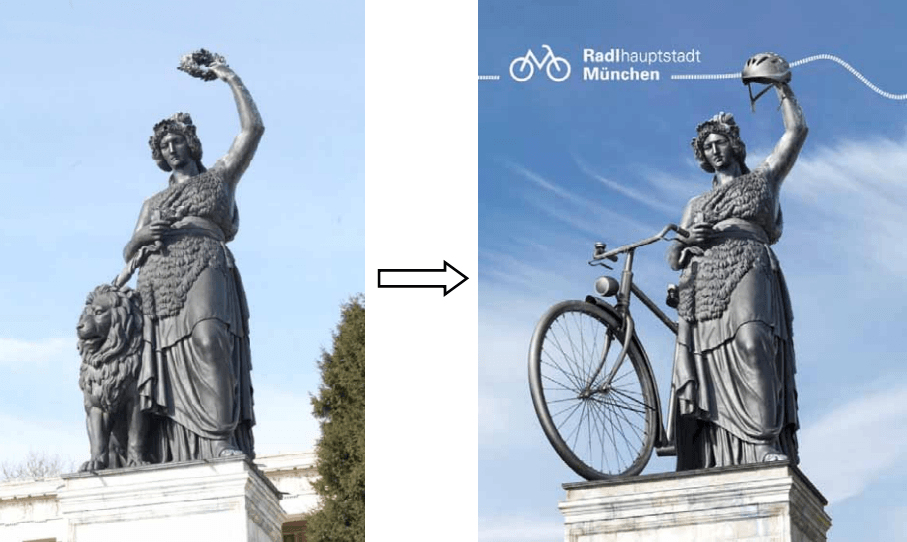 Guerrilla Campaign about the benefits of cycling

This one is quite interesting as it was planned by a group of students in Australia. Much like the campaign in Munich, the aim here was to highlight the benefits of cycling. In this instance, the approach was more “in your face” if you will, with actions like handing out bottled water and having people take a survey.

Chris Froome, Team Sky and Jaguar: ‘Cycling Under The Sea’

Produced by content agency Inc, this video features Tour de France champion Chris Froome becoming the first person to cycle through the Eurotunnel. The feature was part of a marketing campaign sponsored by Jaguar to promote the Sky Team during the Tour de France of 2014. Like we said, you don’t need a huge budget to create a successful marketing campaign, but when it’s there and it’s spent wisely then the results can be amazing.

Agency Brandwave introduces us to one of their most impressive campaigns to date. In 2012 they were selected by Adidas and British Cycling to conduct the announcement of the new official cycling category of the German brand. They had to develop photo shoots, print advertising and brochures among others.

Are you into cycling? Or are you more of a rugby kind of person? Please, let us know in the comments below. Also, if you know a marketing campaign about marketing that you feel we should include on this list, please let us know.