Back in the days before the internet, you would find avid music lovers leafing through stacks upon stacks of vinyl on a Saturday afternoon in some nearby village hall, people marking dates on their calendars for the releases of their favourite artists and the top 10 lining the wall of the likes of HMV and Tower Records. That’s not to mention Top of the Pops.

The world of music and graphics was once far more intricately intertwined, with bands competing for the best covers in order to stand out from the crowd. Though believe it or not, it wasn’t always this way. At just age 23, in 1938, Alex Steinweiss invented the concept of the album cover, which had previously simply been wrapped in brown paper. As designer Steve Wilson says

“I like the idea that with an album sleeve the artwork is forever associated with that album and so you are creating a little piece of history.”

Vinyl cover art is more alive than ever. The fact that the vinyl ultimately provides a format in which their are no rules or guidelines, simply a measured canvas to let your ideas run wild, is precisely what gives it some much energy. It’s not strange then, that I, amongst many others, would experiment with new music by selecting the prettiest covers. Due to this freedom of expression, the world’s album covers make for a playground of awe-inspiring design. Some such examples, you will be more than familiar with, from the likes of Joy Division’s emblematic Unknown Pleasures (the image is now considered to be public domain, hence it spreading like wildfire), Pink Floyd’s Dark Side of the Moon Prism and its goes without mentioning Nirvana.

This got me to thinking. What album cover designs of today and the past are worthy of a customised T-shirt fix up? What makes them applicable to the apparel format and how would they look?

First and foremost, when I was making my selection, I quite quickly ruled out album covers that would mean I would have to use a square design or cut the original artwork.

Clearly inspired by motion design, this is a good example of visual trends for the year of this album’s release, with the whole world going mad for low-poly forms. 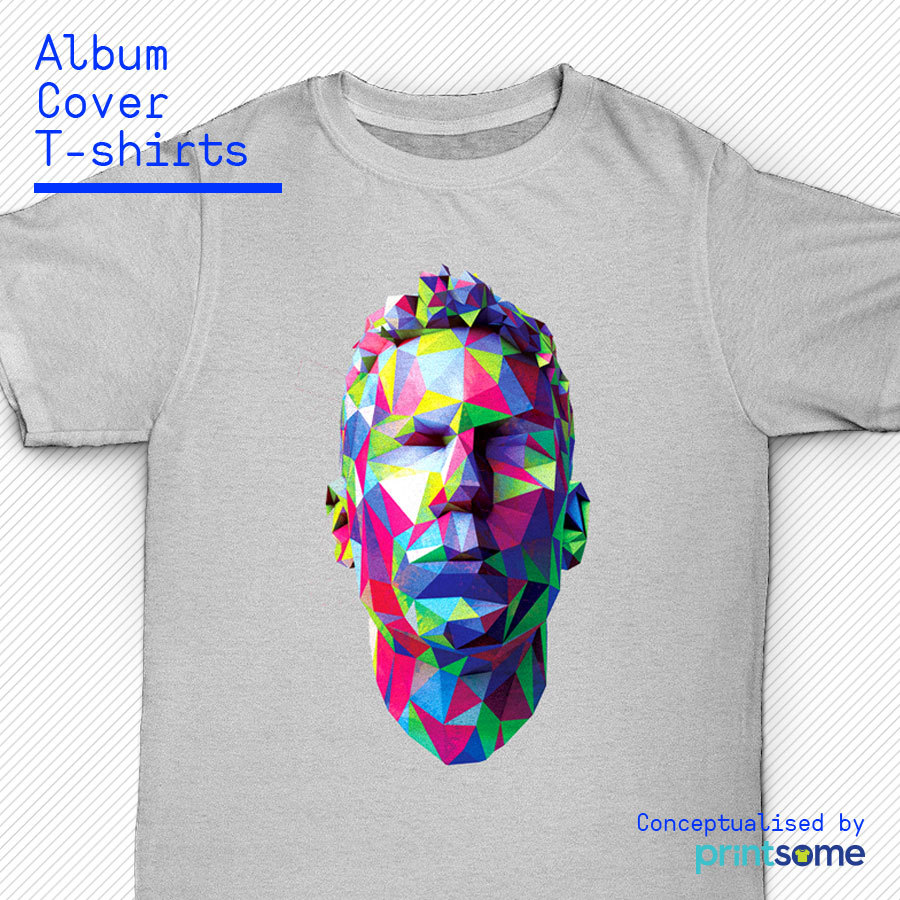 This band have supposedly be playing with metallic gold since 1986, but this is much more than a pretty gold. It has generated a fair amount of opinion and was flagged up quite quickly as best cover of the year by many curators. 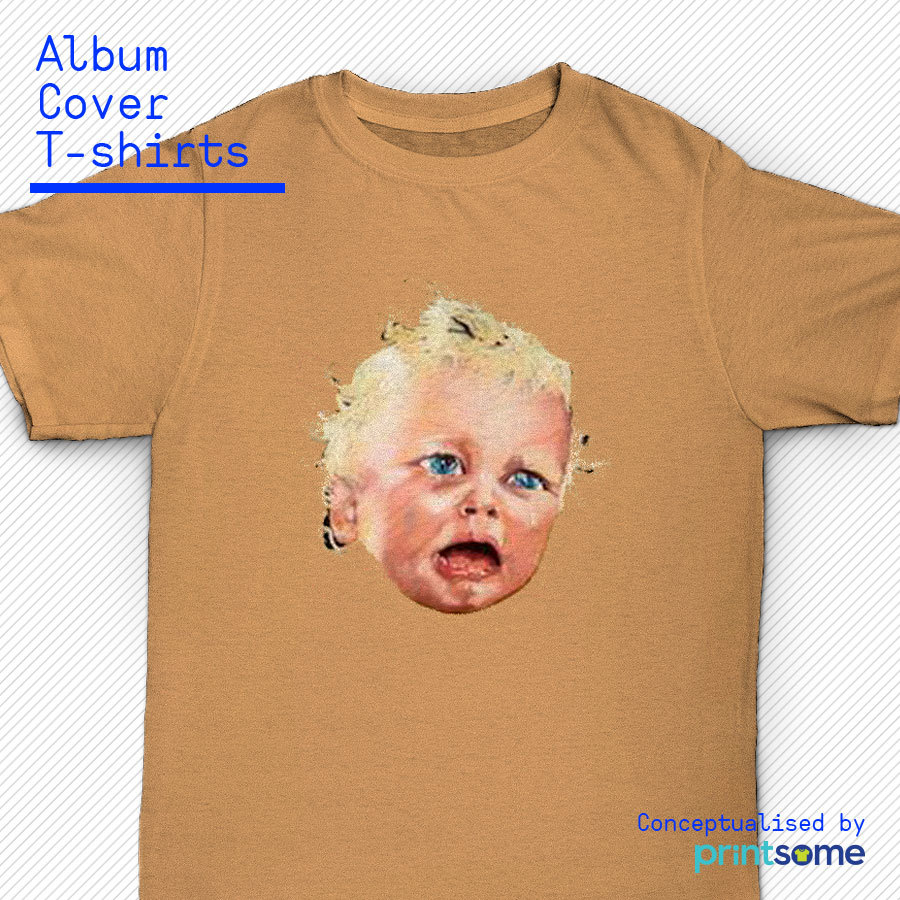 One of many, many, many of this artist’s cool album artwork designs, applicable to almost any music genre. See some of Pitchfork’s favourites from the same year here. 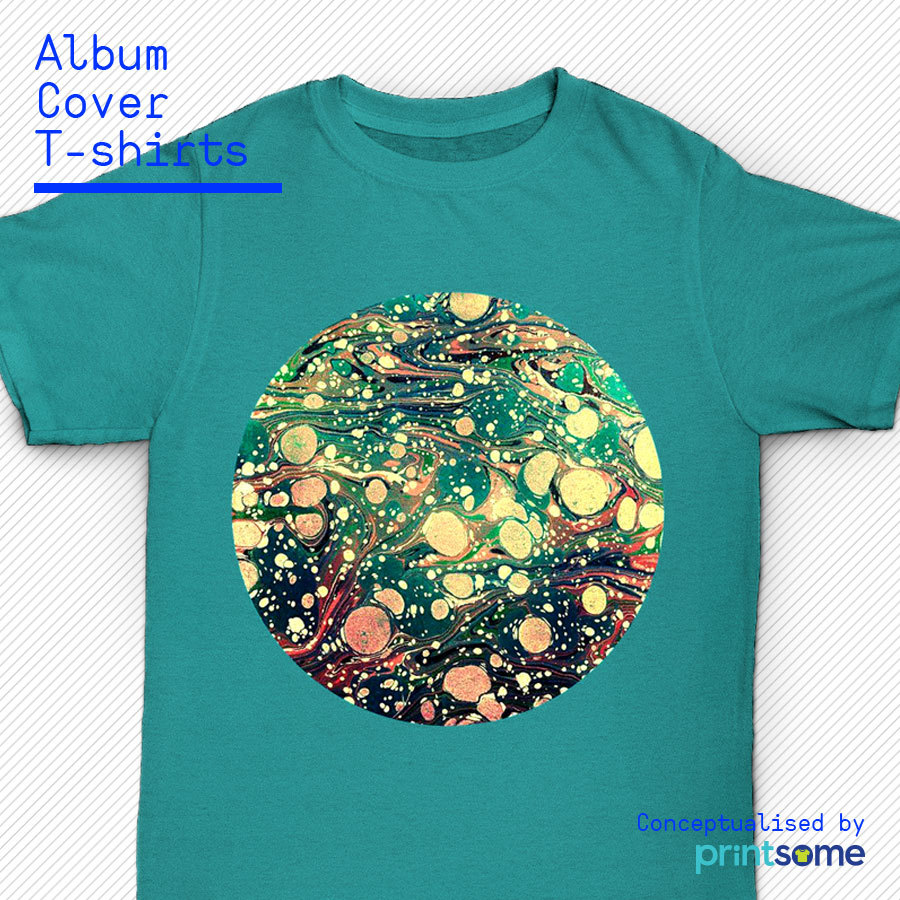 The colour schemes tend to be either very bright or monotone, but always with a decent level of contrast and interesting palettes.

It would be rude not to include at least a couple of examples from the father of album cover design. You might not think a lot of this one, but perhaps when you check the date, you’ll realise how Alex Steinweiss created a small slice musical and graphic history. 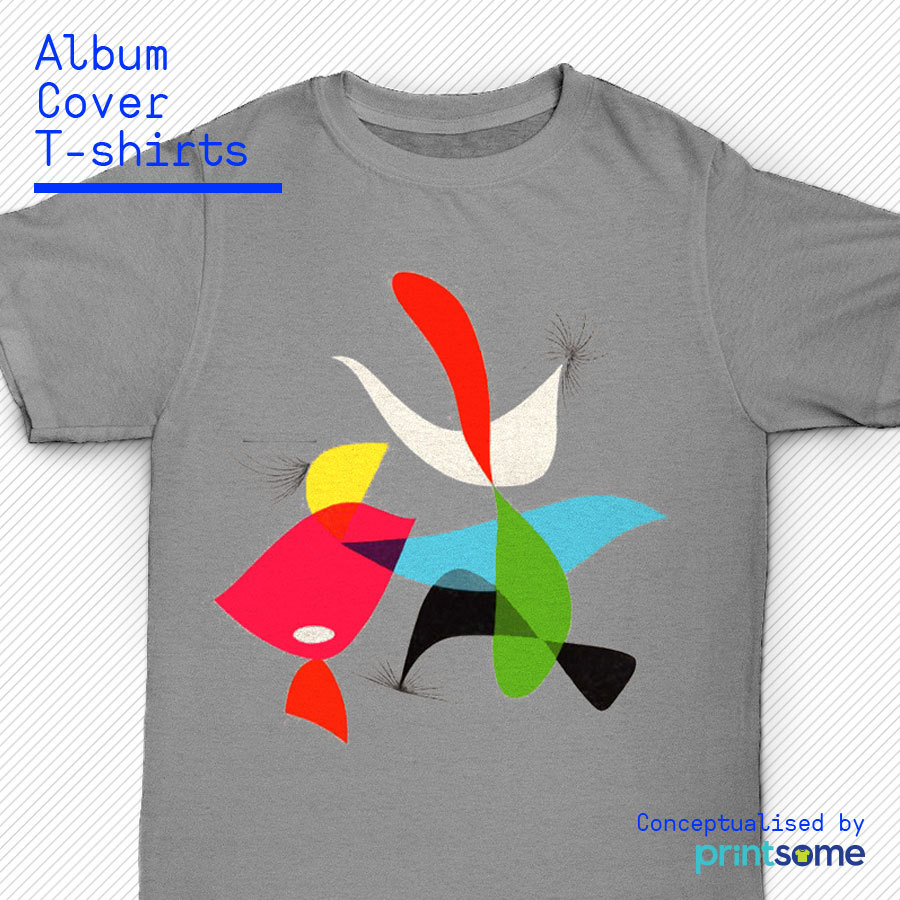 It’s hard to believe just how old this album art is and just how controversial it would have been at the time of its release. It lends itself very well to t-shirt printing with its bold colours and white background. If you like this, you should definitely check out his other designs on his website. 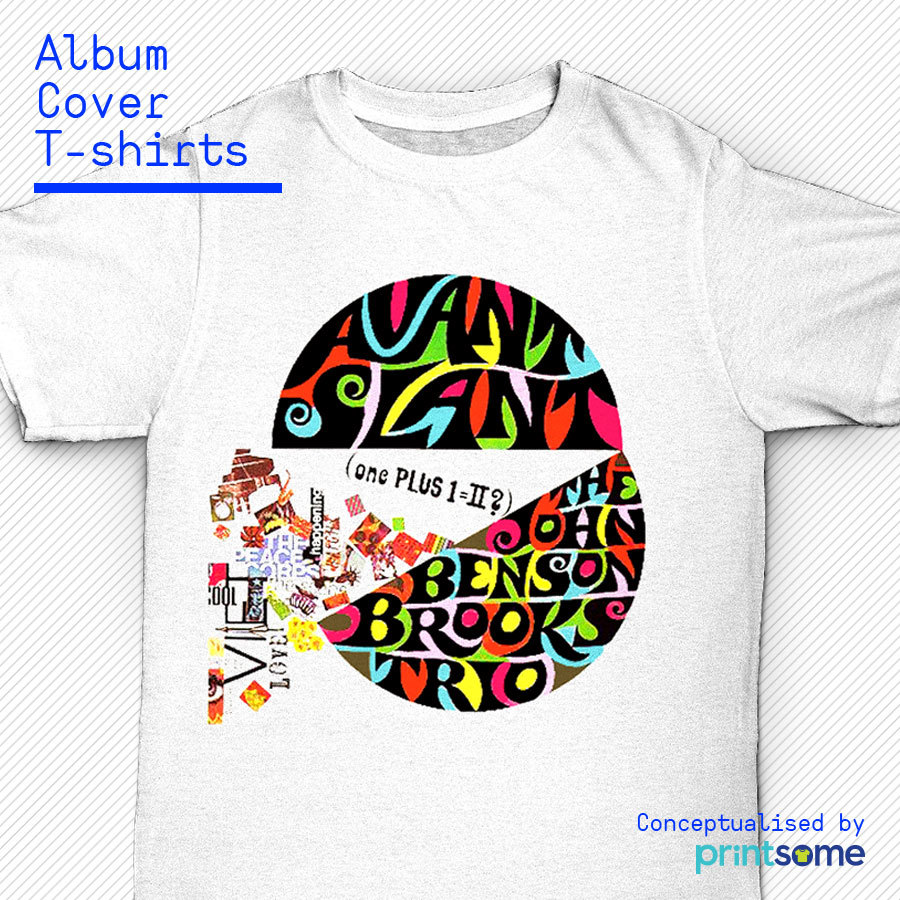 This design duo also designed The Chemical Brothers album cover Push the Button, amongst many others that were shortlisted for this selection.

*At the time of writing, the official website cannot be reached. 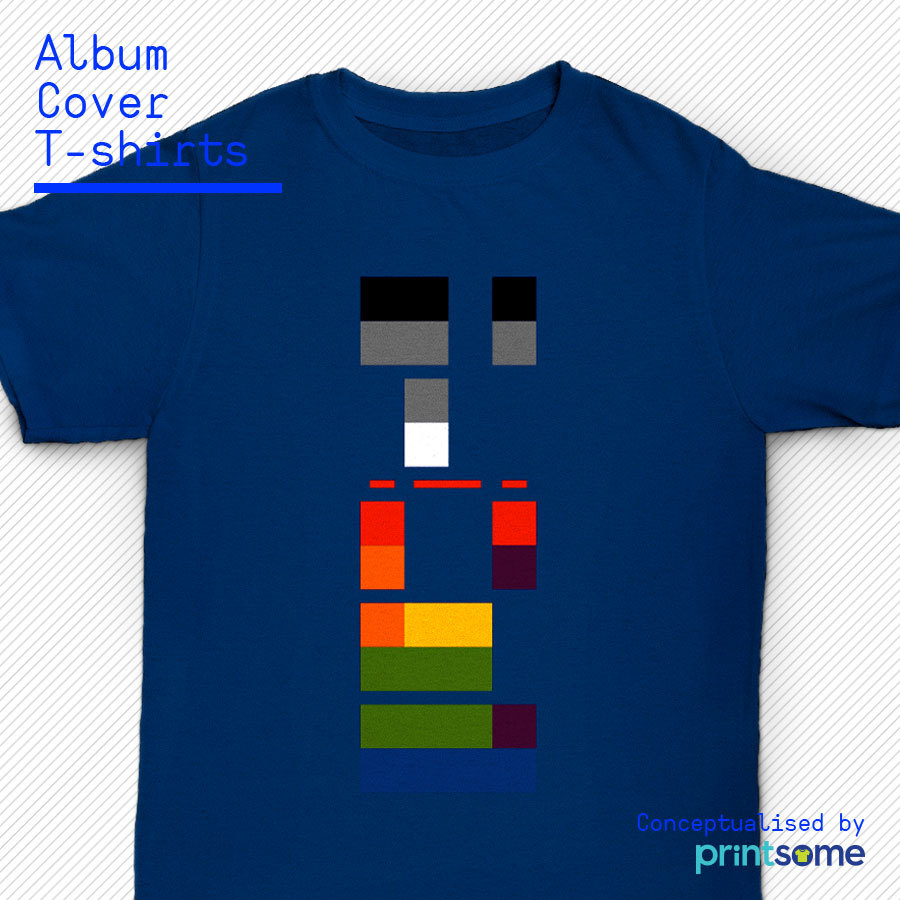 Nowadays with advances in technology, we’re not just seeing illustrated artworks on album covers, 3D art is now very much in the limelight and here’s a great example of its artistic application – voted one of the best album covers 2014.

In general, the t-shirts from history that have been successful DO NOT include any imagery involving the musicians themselves.

Richard Branson’s approval of this record sleeve meant that it was no longer considered offensive by the British public when it was released. 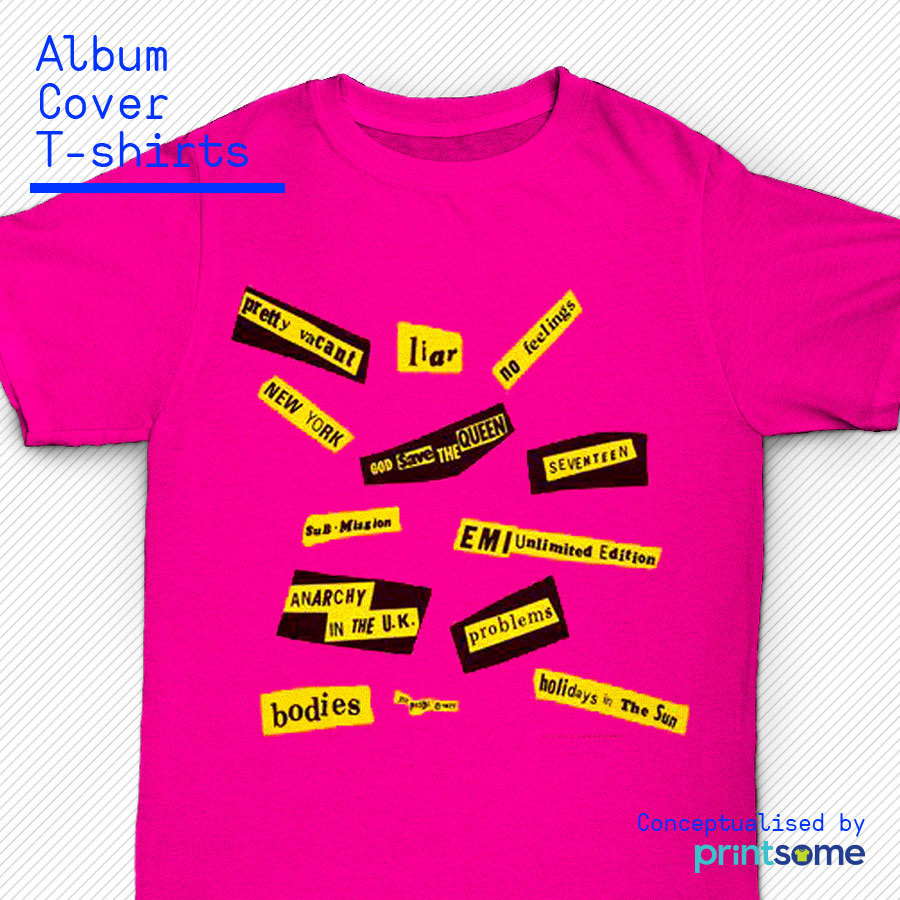 This cover is said to inspired by a water spot on the ceiling of the office after taking LSD. Paul Cannell wasn’t a pro designer either, he was in-house painter for a couple of record labels, which led him to creating some of the most famous album covers of our time. 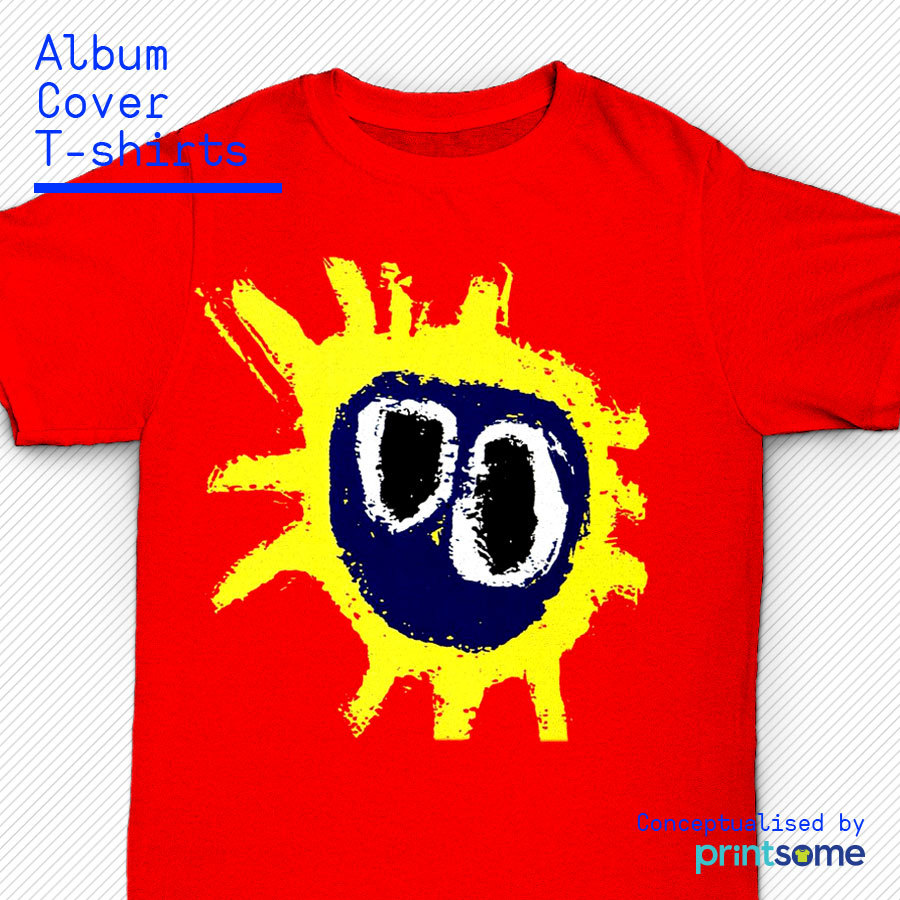 In many cases the artwork is simple, based on geometric shapes and clean lines.

Designed by New York based graffiti artist, Jim Joe, this cover just goes to show that you don’t need to be a famous designer to make your mark. 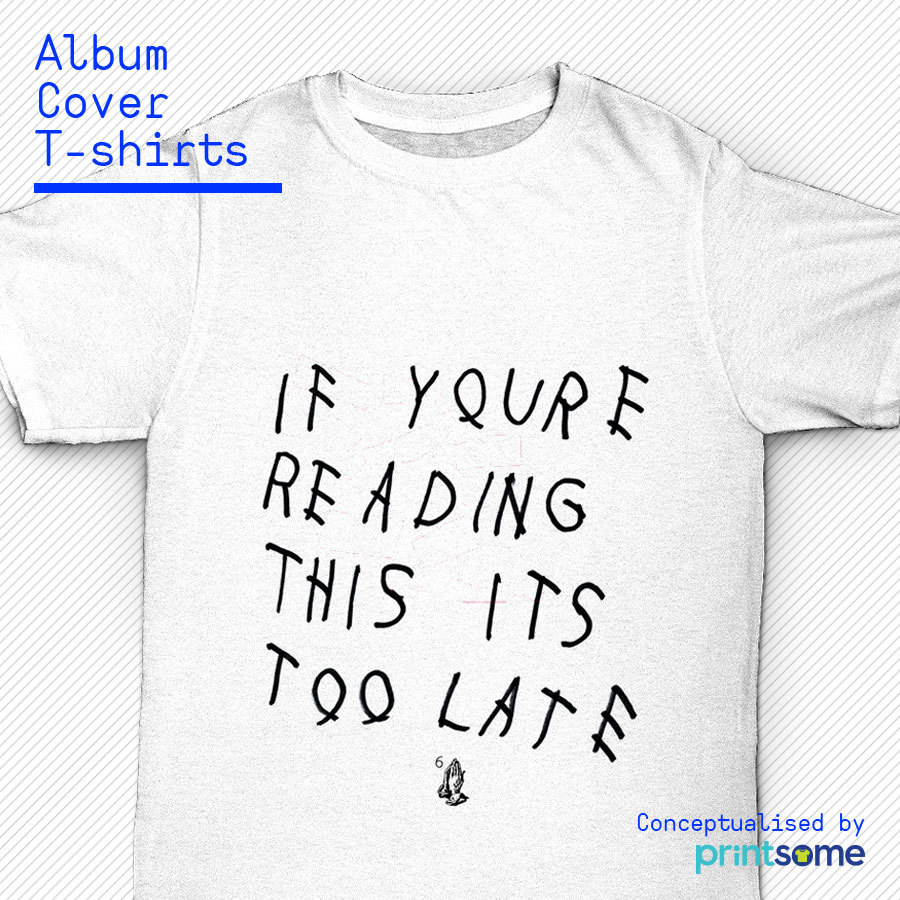 Based on The XX’s simple, yet highly flexible logo design, the cover just goes to show how the finish is everything, playing with the light to give this piece an awesome finish. 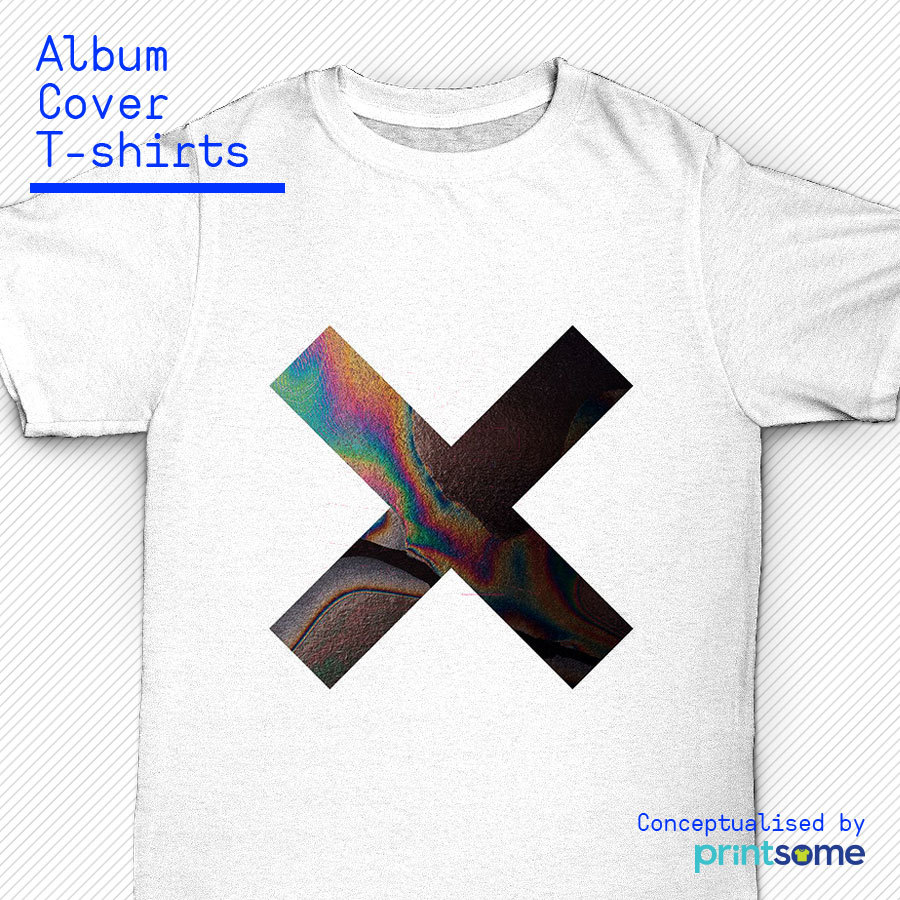 The backgrounds of the original artwork tend to be of colours that are readily available in the world of apparel, such as black, white and primary colours.

Bjork’s album covers are nothing short of exquisite, with an incredible use of photography that could only reflect her bizarre personality and style. They’d also make excellent DTG printed t-shirts. If you want to see a full compilation of the designs by various artists, take a peek here. 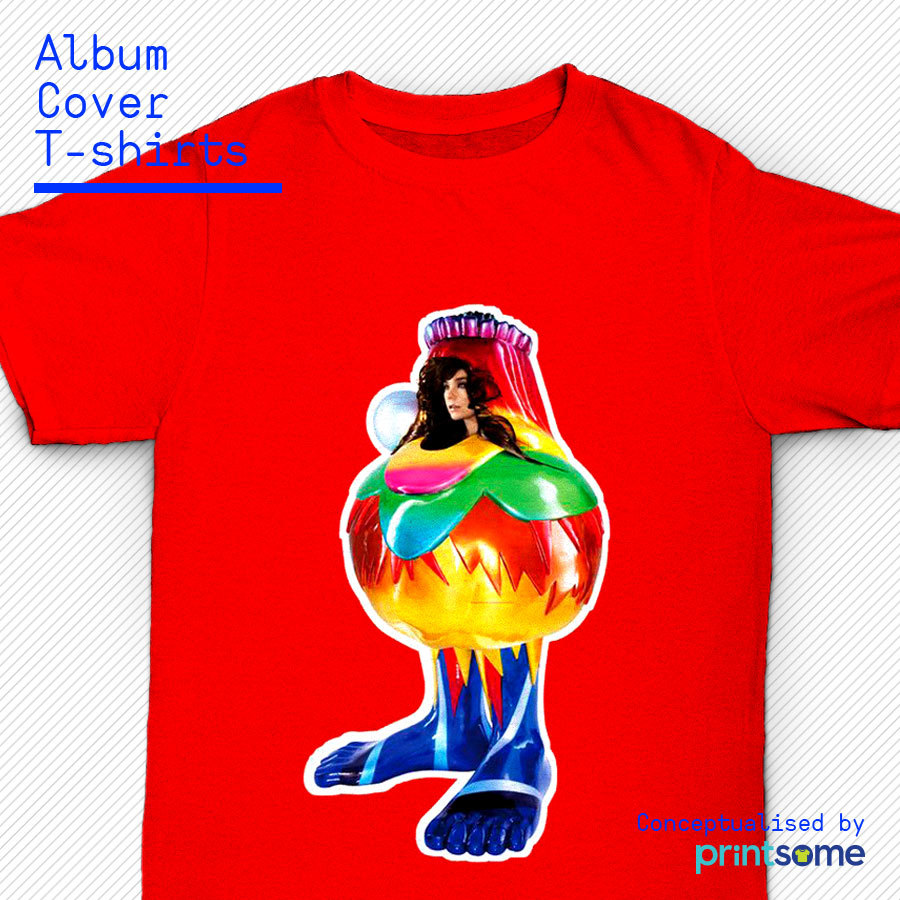 Listed as one of the best albums of 2015, it seems like the designer is either anonymous or a family friend, I just can’t seem to find the info. Drop us a line if you know who it is! 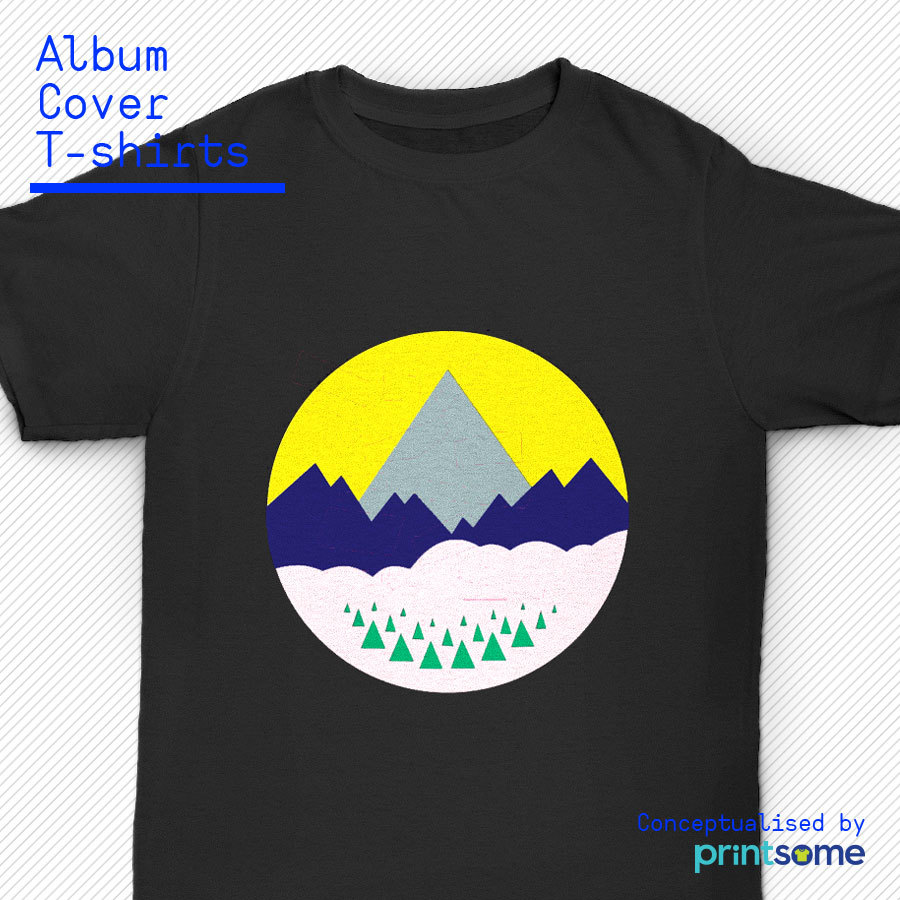 Check out their unofficial website for an idea of these guys’ style. Now I’m sure you’ve seen loads of their work, but I certainly hadn’t heard of them… The Guardian has done an excellent compilation of their work. 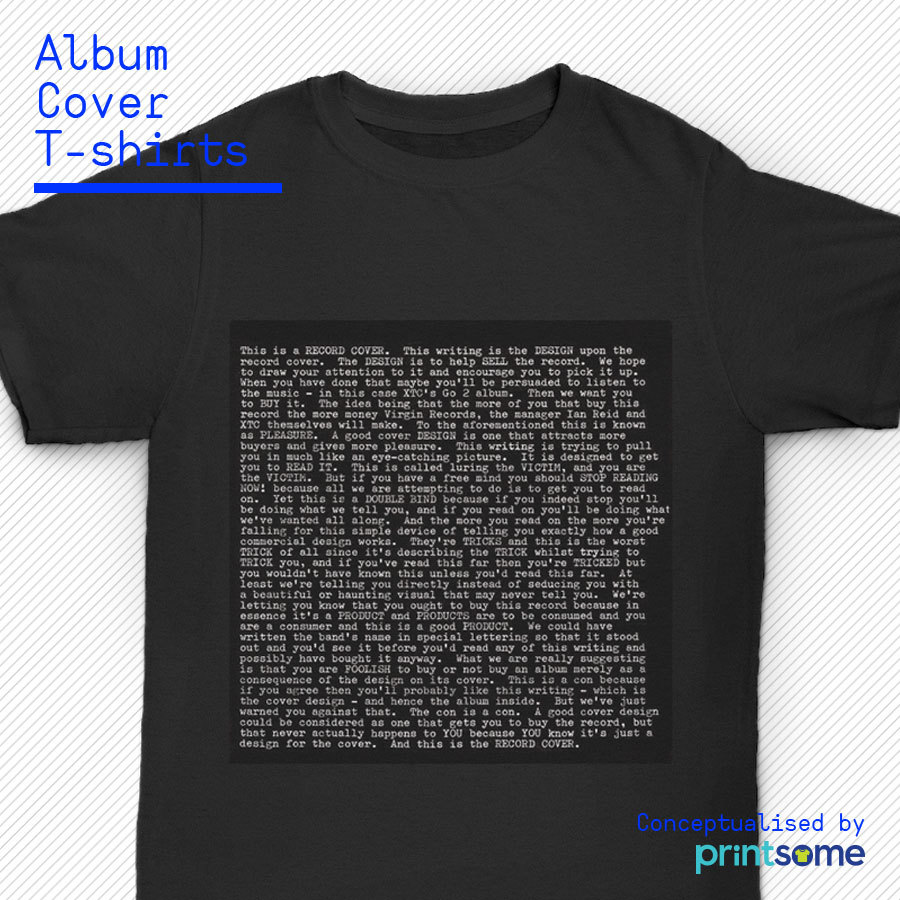 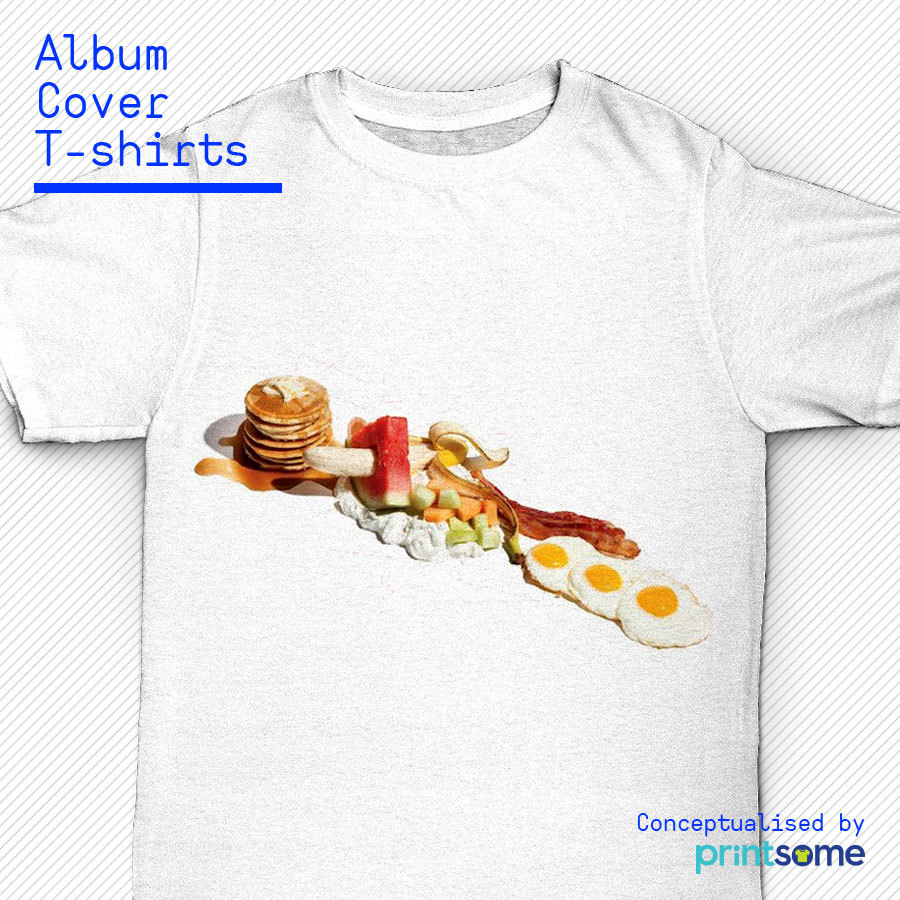 Had to finish on a classic really, incredible that this album is 20 years old and still stands the test of time. And that’s it folks, I hope you’ve enjoyed this little t-shirt journey.

If you find this stuff as interesting as I do, I strongly recommend you check out the following links to get your teeth really stuck in. And don’t forget, should you have any queries about printing your own t-shirts, don’t hesitate to contact us for expert advice on techniques.

Thanks to our five years of experience in the apparel-printing industry, we are able to offer a service catered towards the needs of designers and creative directors. Printsome’s apparel-printing services are perfect for streetwear collections, T-shirt lines and merchandise, among many other possibilities.

From the moment you get in touch, one of our ‘printing experts’ will answer all of your questions and find efficient solutions to your needs. It is our mission to help your career flourish. Thanks to high-quality garments and cutting-edge printing techniques, we can produce almost any design. Printing T-shirts has never been this easy.

Why worry about inventory or logistics when we can take care of that? We deal with the boring stuff so you have more time to do what you love. To find out more, simply visit our website by clicking on the banner below.

Printsome offers T-shirt printing services in London and the rest of the UK, delivering custom clothing in Bath, personalised polos in Hereford and everywhere in between. Get in touch for a quote today.