Have you ever wondered why you would really rather sip on a Coca Cola instead of some random white-label soft drink?

Or why people search on Google and not on Bing? Why a vast majority reads Forbes and not so many people read the Patriotic Millionaires? Why everyone chooses to go with T-shirt printing UK experts Printsome instead of other ones? You don’t need to tell me, I know what you’re going to say:

Because they taste/search/inform better, simple answer. But, do they really?

Honestly, let’s think about it. How can you be so sure that Coca-Cola is a better product than Pepsi? You like it. Perhaps you prefer it, but does that make it better? Not necessarily. I’m not making this up, surveys prove it.

What makes some brands more popular than others is not their product, but their marketing. And I’m not talking about a marketing that’s got to do with ads, trending on Twitter or a rocking Facebook page.

This is a different type of marketing. Marketing that’s got to do with emotions, feelings. These are brands that have somehow managed to connect themselves with a specific emotion. Happiness, love, motivation… feelings that are hardwired into our deepest and most primitive human needs. They have done it well, almost perfectly.

Why am I talking about this? I wouldn’t be if it hadn’t been for one of our famous team-building nights. You may already know, but here at Printsome, the leading personalised clothing agency, we like to hang out and have a drink (or five) after work. These get-togethers usually involve conversations about a wide range of topics. Naturally, branding and marketing is one of our favourites. Some others, I admit, shouldn’t even be mentioned here.

Last Friday we started talking about how some top brands use different emotions to connect with their audience, we thought that in some of these brands’ cases, those emotions were so strong that they could probably sell just about anything.

And then it happened. Again.

What if they sold pills? Tablets? Supplements? You ingest them and they produce an effect on your body. It was so much fun that we just kept talking about it for the rest of the night. What would the different packages look like? What about the pill itself? Flavour? Colour? Price? Question after question. We drafted a first mockup for a new creative exercise and a week later, here it is. The Vitamin B(randing)! 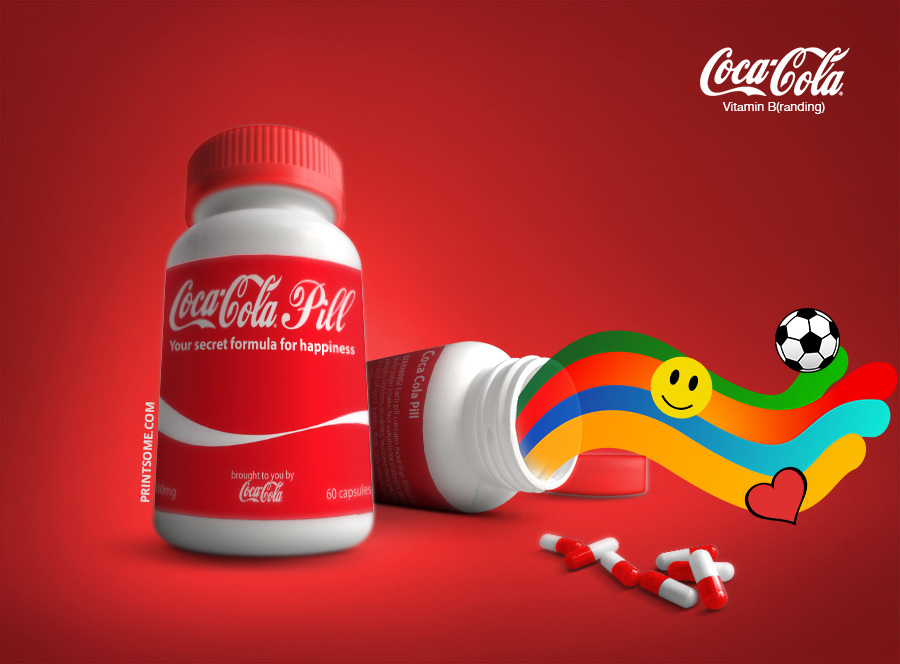 If people had to choose the most iconic brand, Coca-Cola would be on the top of the list, no doubt. The happy brand by excellence has built its entire empire on that feeling. Messages like “smile”, “be happy”, “love” are usually used by Coca-Cola in almost every single advert they do, so it makes sense that they would be on the package as well. It could be one of those effervescent supplements that can be taken daily before you go to work or anywhere else. Who doesn’t want to be happy every day? For us, it’s pretty clear that the label would be entirely red, and include some of its iconic exclusive typography and magical strokes. With a reasonable price, obviously, it wouldn’t taste like coke, it would taste like happiness.

SECONDARY EFFECTS: Try not to take them so often, otherwise your sugar levels will be in danger. 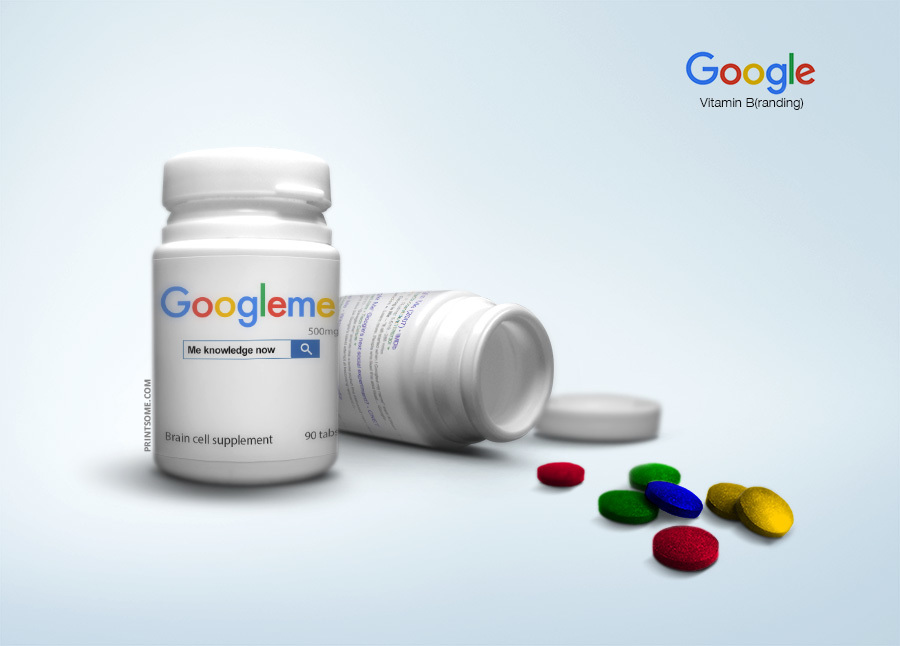 Who hasn’t seen The Matrix and thought about how incredibly amazing it would be to download a pilot training tutorial into your mind (or whatever else you might fancy) and automatically learn how to do it? Oh God! How cool! Google pills would have a similar effect, allowing you to learn anything. With white minimalist packaging, in the same style of the browser, the capsules themselves would come in the different Google official colours.

SECONDARY EFFECT: In the same way that the Google voice fails, Google gummies may make you lose your ability to understand what people say. For example, if someone asks you about your trip to Mississippi, you may reply how awesome your spaghettis tasted last night.

Forbula – The closest step to the third coma 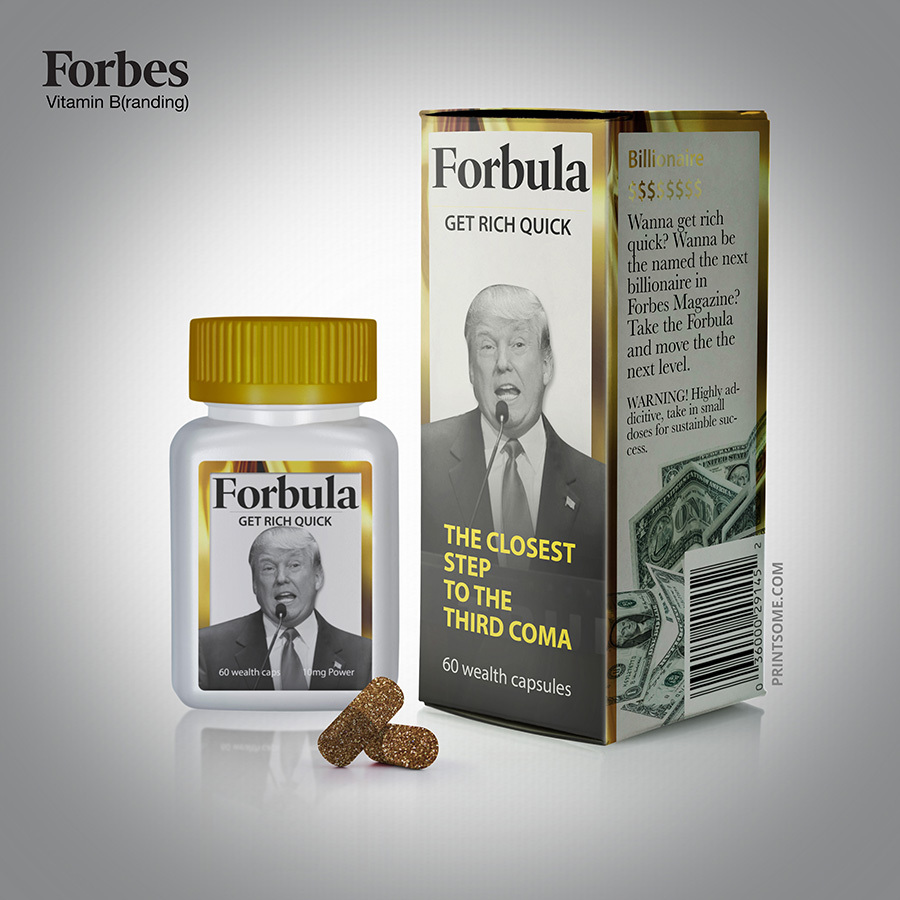 Let’s be honest, Forbes’ target is mostly business people who want to get rich, become popular and create a strong personal brand. Can you imagine how awesome it’d be to take that pill and automatically get rich and be named man/woman of the year? Sounds good. Being pretty expensive, and looking like gold, the Forbes pills package would probably be black, with a big “F” printed on it and feature a different business related quote on each box. Price? £100.000. Why? Because I once read an article which said that in order for one to be considered “wealthy” one had to have at least £100.000 in savings. Tastes like money.

SECONDARY EFFECTS: Highly addictive, some people say they open a door to other places. 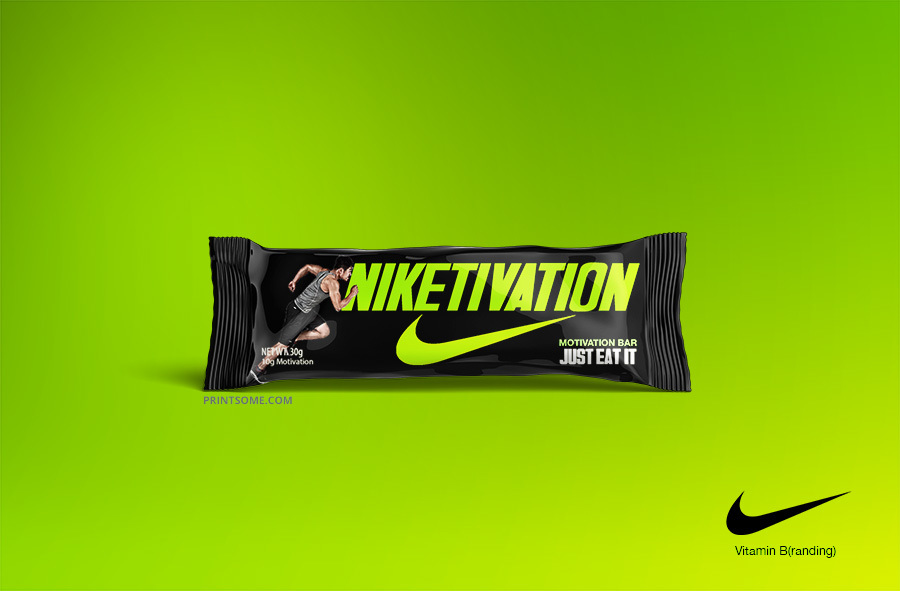 This is a good one. It’s pretty well-known that Nike works around your motivation, that’s a strong emotion ?? to work with, but would Nike really sell drugs? Do you really see them getting into that market? It doesn’t seem right to us, that’s why we thought they could produce energetic bars instead! Organic extra healthy bars made in China and sold massively. With a light flavour, it’s made for people who look after themselves.

SECONDARY EFFECTS: Doesn’t satisfy hunger and there would be a slight chance of bulging veins, as well. 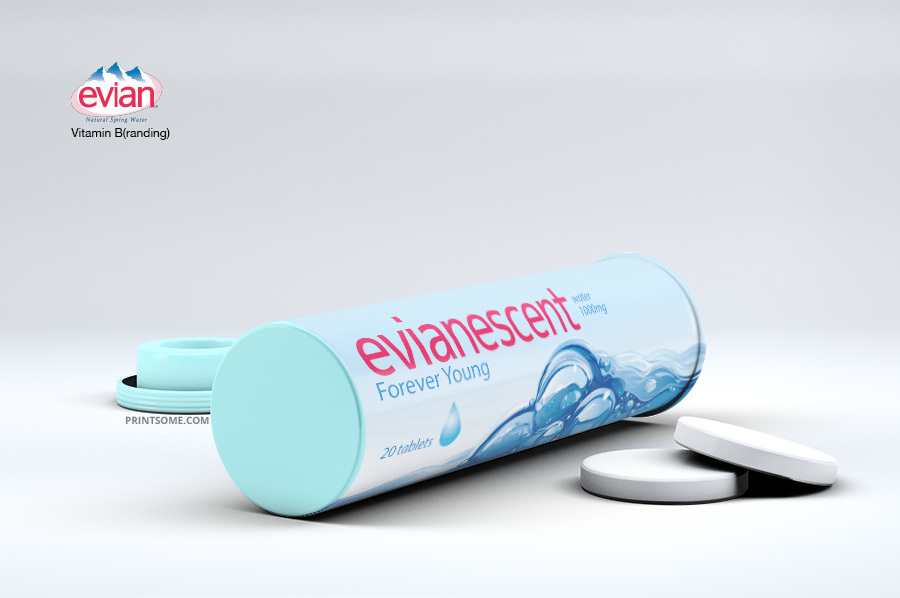 Who wouldn’t like to be young forever? When we think of brands that play with the concept of “eternal youth” Evian is one of the first that comes to mind. In this case, we don’t believe that pills and tablets would be the best product since their form does not go well with the “forever young” narrative. Instead, we thought of Drinkable Collyrium! A drop of eternal youth! Think about it, a bottle with a clean, pure label that suggests the eternal search for youth and beauty. Holy water! At a holy price! It’s perfect.

SECONDARY EFFECTS: An unbearable need to go to the loo every five minutes. 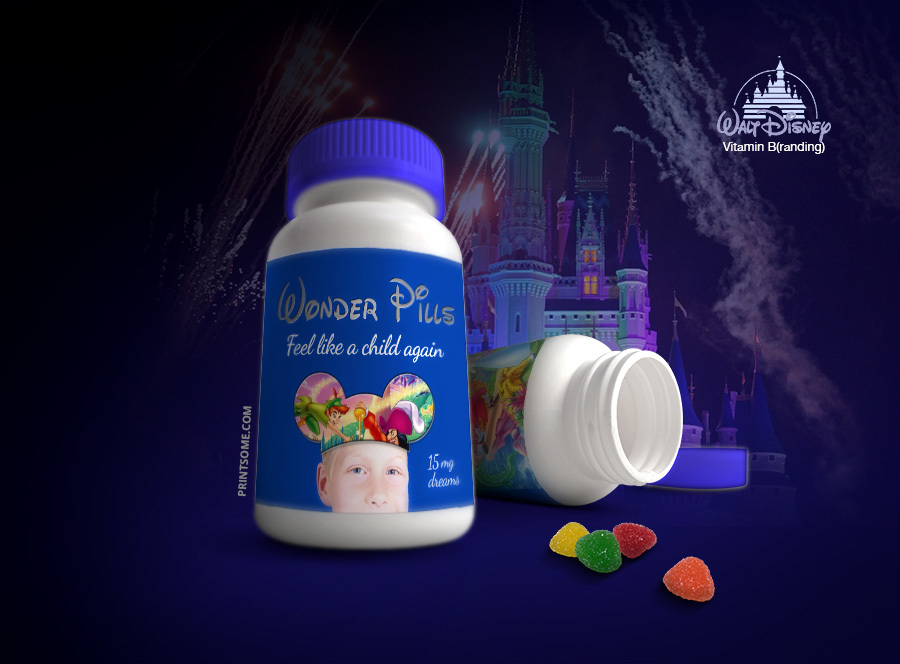 You’ve probably heard that children are by far more creative than us old folk. They’re nowhere near as self-conscious as we are, which allows them to make decisions that would never even cross our minds. They’re bold, they dream, they simply dare to open their mouths and speak out loud. It doesn’t matter if it makes sense or not. And that, my friend, is called imagination. Wouldn’t you love to be able to do that? Maybe not all the time, but on certain occasions, it’d be awesome. Disney’s candy would offer just that. The package design would keep that innocent essence and the sweets would be pretty colourful and shaped like Mickey Mouse’s head. 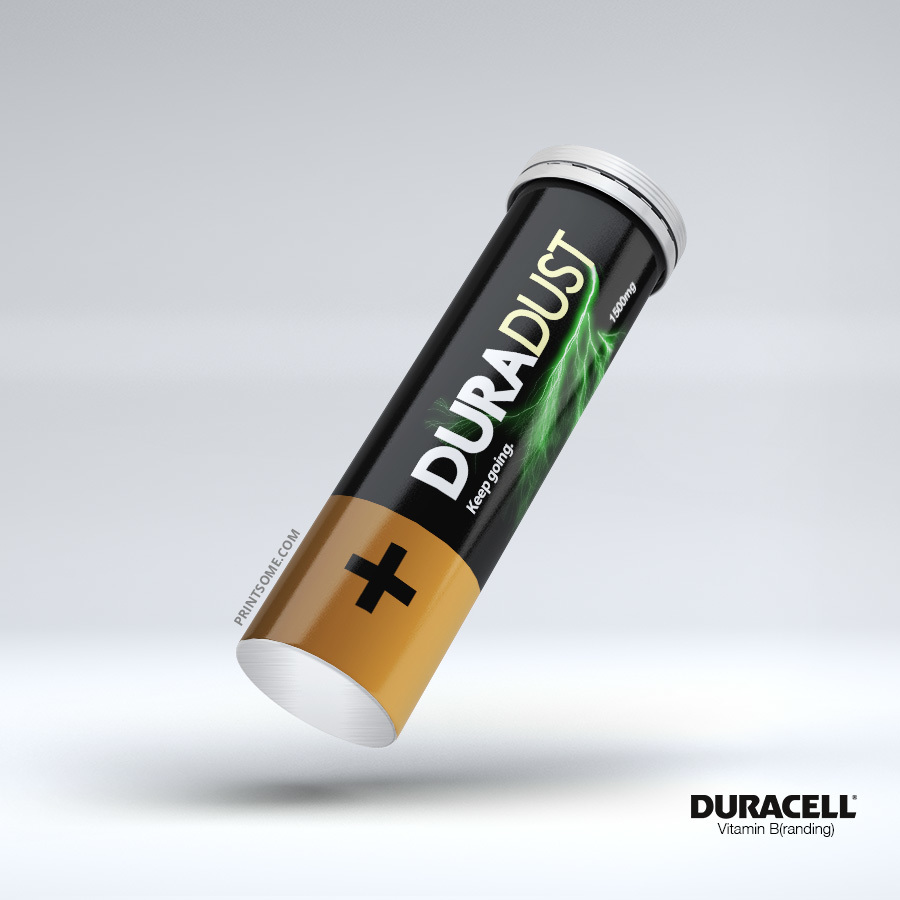 Are you tired? Is the week getting the best of you? Do you struggle to get up every morning? No worries mate, I’ve got what you need. Duracell, the leading battery brand in the whole world, just announced its new product: Not pills, energetic bars, or gummies, but powder! Like a gym supplement, every morning you can mix up a bit of Duradust with water* and you’re set for the rest of the day. No one will stop you. Easy to prepare (just follow the instructions on the back of the package). Not very tasty.

SECONDARY EFFECTS: You may also snort it. !!! 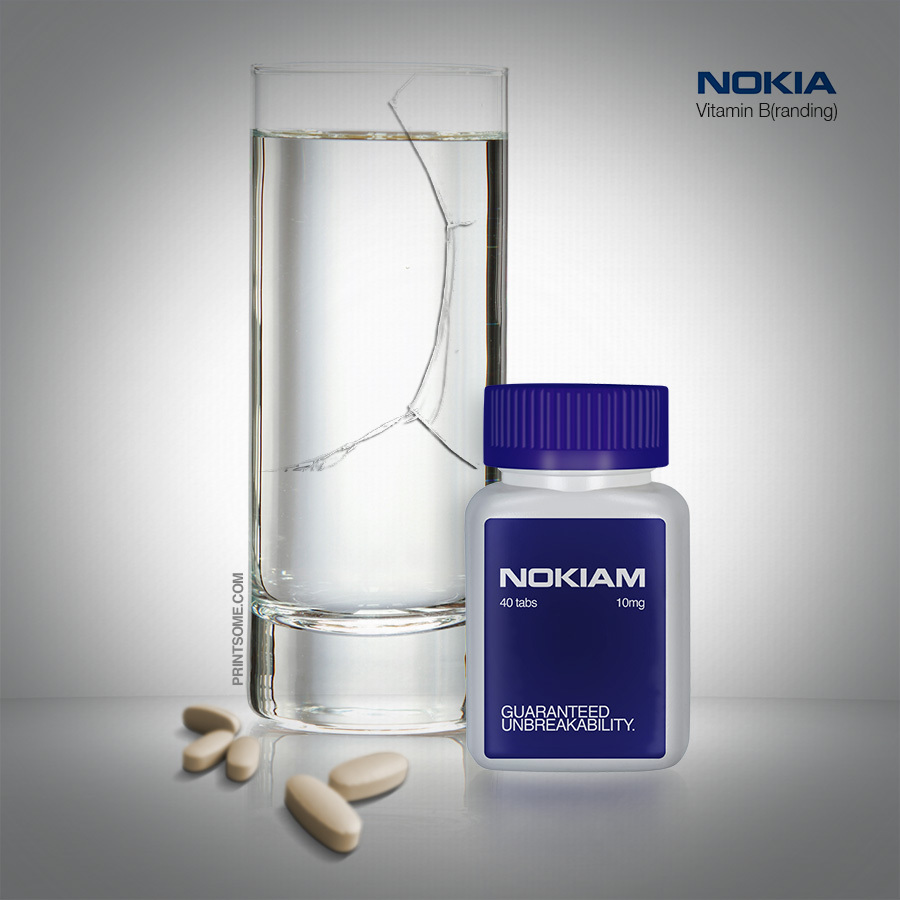 How long did you have your last phone for? Probably about one or two years, perhaps less. I remember my last Nokia lasted for about 5 years, and I didn’t change it because it broke (and I swear I tried it). I wish other things were as “unbreakable” as my old Nokia was, don’t you? Wish no more, Nokia capsules are here. Presenting a standard classic black packaging just with the Nokia logo on it. I don’t expect anything creative and neither should you. It’s Nokia, after all.

SECONDARY EFFECTS: You? won’t be that pretty, better if you assume that already. 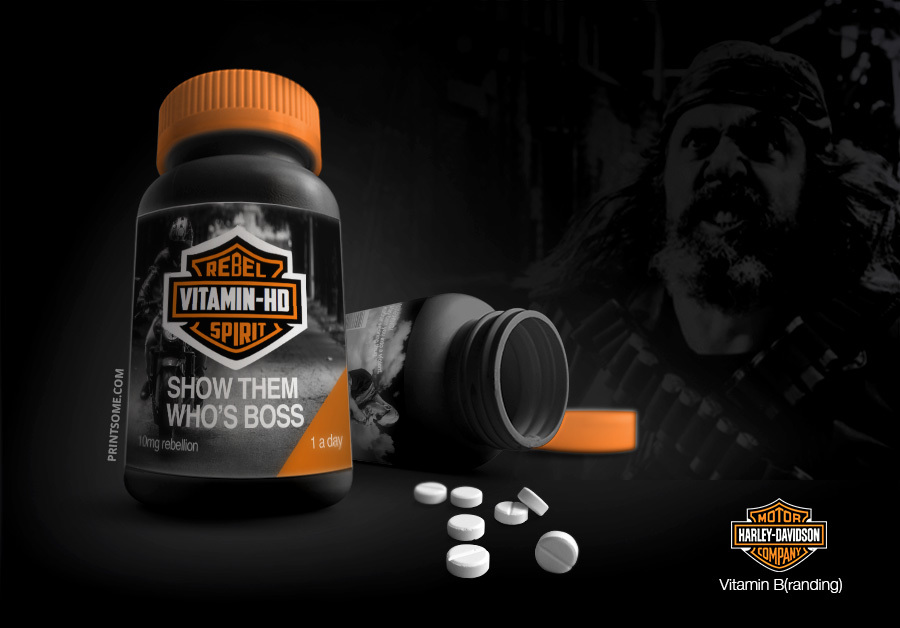 For when the system drives you crazy when you’d send your boss to bloody hell or for when society just doesn’t seem to understand you – there’s a Choppill for you. Harley-Davidson is probably one of the most renowned brands on Earth and its spirit is a rebel one. What else could its pills do? If you just need some days of being completely on your own, if you want to feel the wild air on your face and live like a rogue, then take one of these. Showcasing the style of a biker jacket, the package would be mainly black and carry pills that would undoubtedly taste like fuel.

Gilletterone – Be a cut above the rest 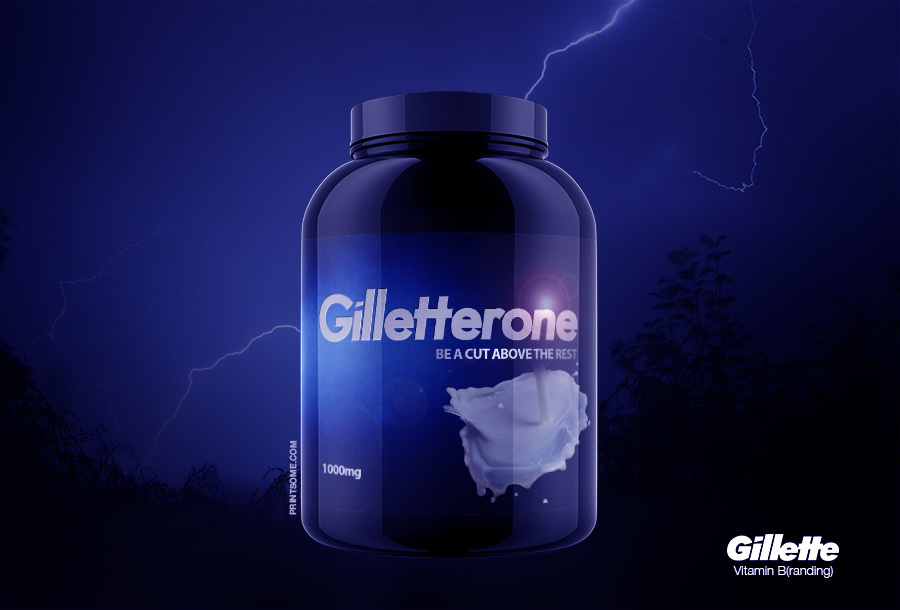 Ever felt like you want to be the man that all the girls swoon over? Do you just want to give off that masculine, testosterone air that makes them come running? Gillette is for you, with its robust masculine packaging, and alpha male dominance in the supermarket, this man milkshake supplement is for you. 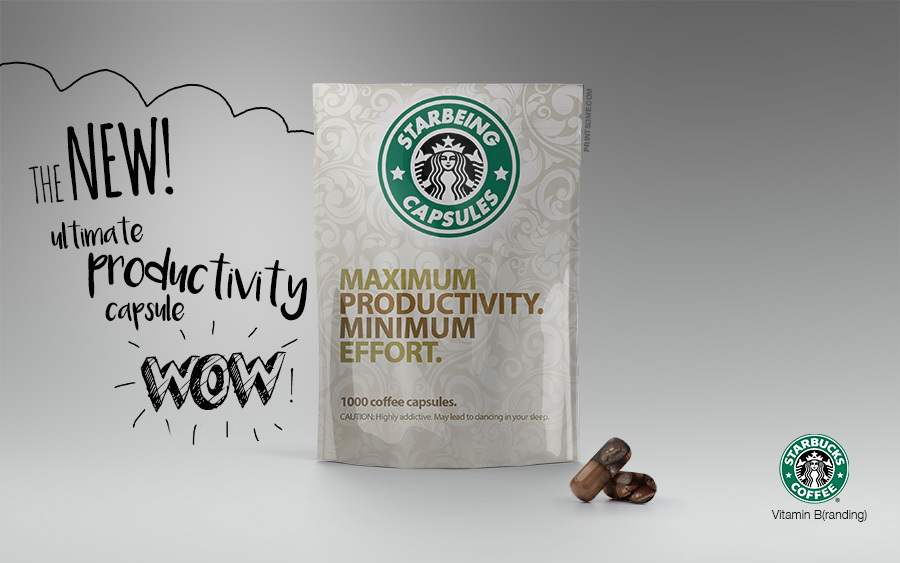 Want to be like a productive socialite without actually having to wait for the coffee shop to open? Are you studying, working and a full-time social butterfly? Starbeing is for you, the new coffee flavoured capsules from Starbucks are filled with miniature coffee balls that make you social, productive and generally on fire in one shot, without making you need the toilet or overdose on sugar.

SECONDARY EFFECTS: Might make you dance in your sleep. Highly addictive. 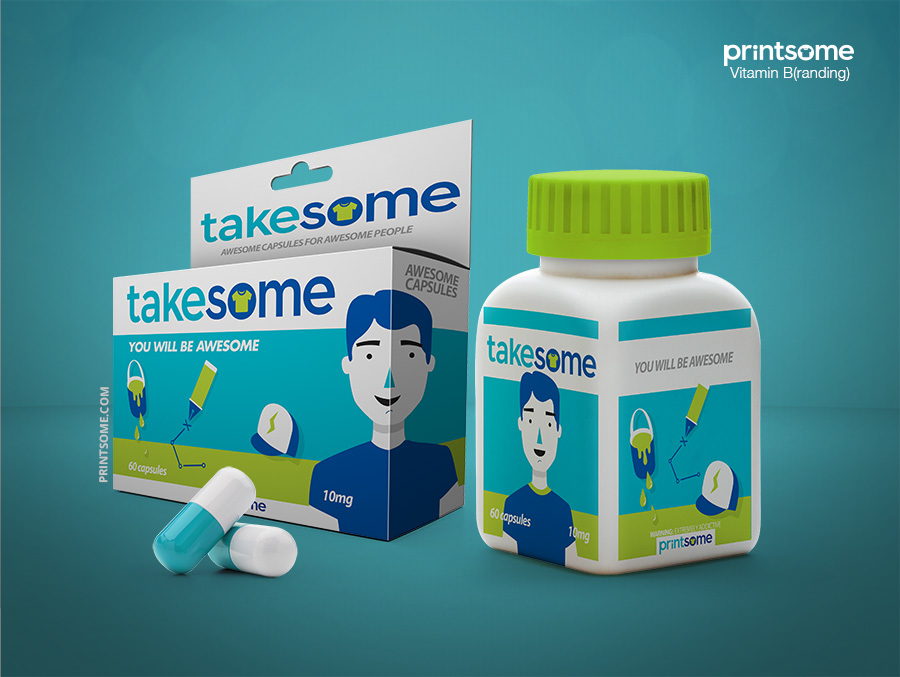 Last but not least, our favourite one. Printsome pills would make you feel amazing, of course. Using our corporate colours and typography, the product would come in a classic looking package, but with a very creative twist. Being affordable, the results couldn’t be a better deal. How would they taste? Silly question. They would taste awesome, of course!

Well, with all this, I hope you enjoyed our latest creative exercise. In case you did, don’t hesitate to have a look at some of other popular ones such as the Beertualising or The Brand Colour Swap, bet you’ll find them cool too!

Do not miss other creative pieces, subscribe to our newsletter for free and receive the most original content, every week straight to your inbox!

Printsome is a t-shirt printing London agency delivering from to anywhere in the UK, for some advice on personalised sweatshirts or promotional bags, or simply a nice chat about vitamins, do not hesitate to get in touch!