Is a wet T-shirt contest a good way to promote your business?

It is strongly associated with spring break in the US, but on the other side of the ocean the name conjures up images of drunken summer nights at a Spanish resort. Travels were the only souvenirs are lobster red sunburns and awful flights. Have you ever gotten on a plane with a hangover? Hell exists and it looks like a headache on board of a Boeing 737-800.

But why are we talking about it?

Wet T-shirt contests are more than just a pastime of intoxicated straight men, they are also used to promote bars, nightclubs and as it turns out even a film. But are they effective? Are they even ethical? In order to answer these questions, let’s take a brief look at the past.

A brief history of the wet T-shirt contest

Some sources trace the origin of the wet T-shirt contest all the way back to the 40’s when the Spanish festival La Tomatina first became popular. This event takes place in the town of Buñol in Valencia and gathers people from all over the world to throw tomatoes at each other — just for fun. When we look at the state the fruit’s juice leaves the garments in, it is easy to understand how the connexion was made.

Others cite Jacqueline Bisset’s role in the movie The Deep as a source of inspiration. In the 1977 adventure film, the English actress spent a fair amount of time underwater wearing nothing but a bikini bottom and a white T-shirt. This theory makes more sense since the first recorded wet T-shirt contest was celebrated in the same decade. 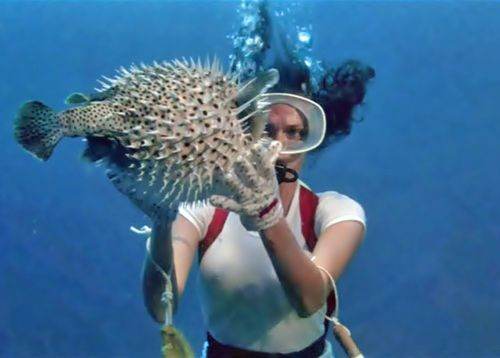 Film-maker Dick Barrymore claims in his autobiography Breaking Even that he organised the very first wet T-shirt contest in the Boiler Room Bar in Sun Valley (Idaho, US) in 1971 as part of the promotion for a film project of his. According to the book, he just handed out white branded T-shirts and the word got out about the event. The day of the contest, ‘…Everybody who was anybody in Sun Valley showed up…’ But the activities weren’t recorded on the press until 1975 when the Palm Beach Post published an article with the title ‘Wet T-shirt contests pack’ which talked about the events taking place in the clubs of New Orleans. 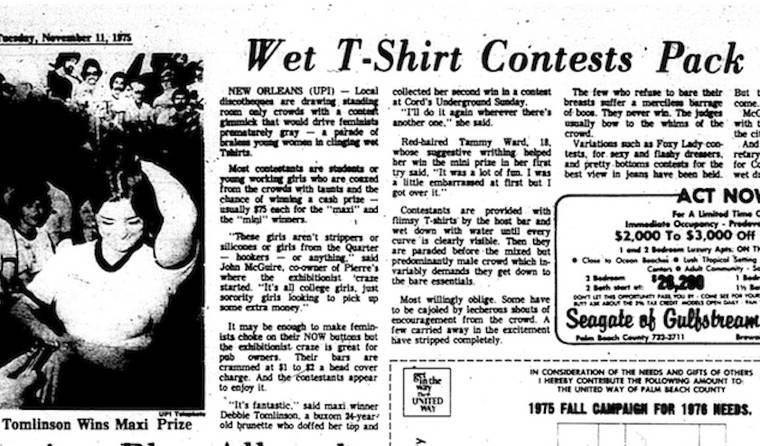 From there it was only a matter of time till it found its new home in Florida (the spring break capital of the world) and then later to the rest of the world.

Using them to promote a business

As we learned through Dick Barrymore’s book, the contest started as a promotional tool. When looked at it from a cold perspective, it makes sense. It is easy to organise, all you need is white T-shirts, people who are willing to get wet and — water, duh. Oh, and a reward, but it seems like the least of it, doesn’t it? And for a bar owner throwing a bottle or two shouldn’t be a big expense. Also, I’m not a psychologist, but it seems like the reward here is the least of it. The real prize here is the rush of exposing oneself to a group of strangers. Don’t ever underestimate the power of exhibitionism.

In the UK, anyone can contact the people behind the official Miss Wet T-shirt contest and they’ll organise the pageant for you wherever you want. They promise experience and an increase in box office takings.

But before we organise a wet T-shirt contest, there are a couple of points that need to be addressed:

It is one of the oldest tricks in the book; the go-to solution for marketers that are lacking ideas — or, depending on the product, don’t have another choice. But, does it really work?

It depends on who you ask. A study published in 2015 by the American Psychological Association contradicts the old belief. The investigation, which not only concentrated on sex in ads but also violence, suggests that these images don’t always have the marketer’s desired effect. They argue that the strong content does get our attention, but it either causes rejection or pull us in so hard that we forget everything else… including the product. At the end of the day, we remember the images rather than what’s being sold.

But what does this got to do with my business? You may wonder. Simply put, a wet T-shirt contest may pack a venue, but the chances of converting these people into recurring customers or even them remembering the name of the bar are slim. At least according to the study mentioned above.

If that’s not an issue, then there’s still one more question we need to answer.

Isn’t it wrong? Isn’t it misogynistic? This is a heated argument. If you do a simple Google search, you’ll find pages and pages of people banning the practice. Their arguments are valid, but what I often find in these criticisms is that they often don’t include the women in question. It feels more like finger pointing rather than a conversation. As far as I can tell, the ones participating in these kinds of activities do so voluntarily. A case could be made for the levels of alcohol being consumed and how it affects the decision-making process, but then we’d be entering into a completely different discussion. I mean, people have made way worse decisions than to parade on a stage while drunk.

Of course, a contest where women are judged solely on their ability to excite a group of straight men sounds fundamentally wrong, but if everyone involved is an adult and they all agree soberly (which is the part that often fails here), then who are we to judge?

There’s also the question of gender. Why aren’t men allowed to participate? Well, actually in some instances they are. The official UK Miss Wet T-shirt contest we already mentioned offers a male version of the contest which is called the Mr Wet Boxer contest. It involves wet underwear, as you can imagine. Arguably, it is nowhere near as famous as its female counterpart and it mostly takes place in gay bars, but it does exist.

Organising a wet T-shirt contest could be an efficient way to draw attention to your business, as long as you’re prepared to deal with the consequences, that is.

It is a polarising performance, to say the least. Ultimately, the decision relies on the event organiser or business owner, but one thing is for sure and that it that you can always count on a good ol’ wet T-shirt contest to spice things up.

Disclaimer: All opinions are my own and don’t necessarily represent those of Printsome.